After a relatively calm week
last week, all markets were active last week.
Stocks were up big – more than 12% as the market continues its bi-polar
behavior.

Metals rallied and the
long-term US Treasury Bond declined as yields rose.  The US Dollar was also weaker relative to
other currencies.

Stocks fell last week in
what would have been considered a volatile week not that long ago.  Given recent stock market price action
however, last week’s price action in the major stock market indices was
relatively calm.

Metals fell slightly, the US
Treasury long bond rallied some and the US Dollar strengthened on a relative basis.

Financial and economic
conditions continue to rapidly change and evolve as the coronavirus economic
restrictions remain in place.

While the focus of
policymakers is to ‘flatten the curve’ as far as coronavirus infections are
concerned, there is a curve that is being discussed far less.  But, over time, this curve won’t flatten and
will end up causing economic and financial outcomes that will be devastating to
those who are unprepared.

The balance sheet of the
Federal Reserve.

For those of you who are new readers of “Portfolio Watch”, when the Fed’s balance sheet expands, it means that the Fed is creating money, virtually out of thin air.

The Fed doesn’t manufacture
anything to sell so in order for the Fed to get money to buy assets from member
banks, that money is just created.

And, now, under the new
rules post-stimulus, the Fed can print money to loan to the US Treasury.  The US Treasury can use SPV’s, or special
purpose vehicle, to buy corporate bond vehicles on the open market by borrowing
newly created money from the Federal Reserve.

In effect, this nationalizes
more of the private sector and does so through money creation.

Let that sink in, it’s
alarming. 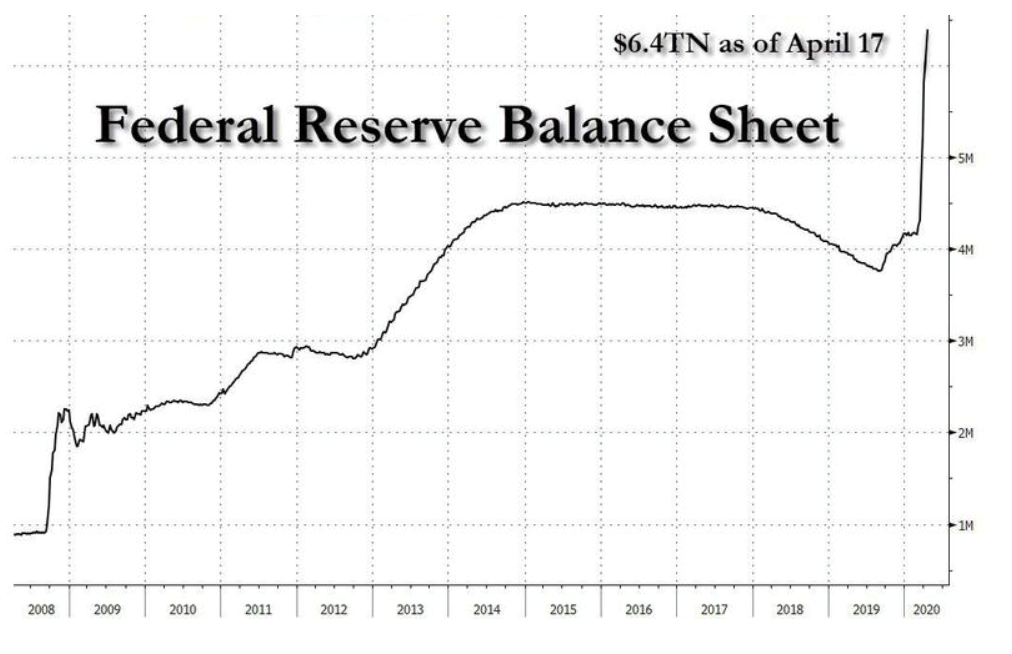 The chart on this page shows
that the balance sheet of the Federal Reserve will reach $6.4 trillion by April
17 – that’s just one week away.  That’s
up about $2.5 trillion this year alone!

But, this past week, the Fed took an even more extreme position, stating that they would begin purchasing junk bonds as well.  Junk bonds are bonds that are below investment grade and carry more risk than an investment-grade bond.

As fresh evidence of the economic toll
from the coronavirus pandemic floods in, the Federal Reserve unleashed another
round of emergency measures, including a pledge to provide support to
risky corners of financial markets that have been some of the hardest
hit.

The Fed said Thursday it will invest up to $2.3 trillion in loans to aid small and mid-sized businesses and state and local governments as well as fund the purchases of some types of high-yield bonds, collateralized loan obligations. and commercial mortgage-backed securities.

The money comes on top of the massive
stimulus that the Fed had already announced and it thrusts the institution into
the sort of speculative lending activities it had shunned in the past --
underscoring the risks that Chairman Jerome Powell is willing to take to shore
up the economy.

This demonstrates how
desperate the Fed has become.

As noted above, as part of
the CARES Act, the Fed will loan money to the Treasury to buy corporate bond
issues.  Now, the Fed has announced that
the central bank will directly buy junk bonds.

This despite the fact that it is not legal for the Fed to directly purchase any security that is not government-backed.

What could go wrong?

Money creation is on
steroids.

In contrast, the Federal Reserve created about $3 trillion in new money from the end of 2008 to the beginning of 2020.  At this rate, the Fed will have printed an equivalent by the first of May of 2020.

That’s as much
‘out-of-thin-air’ money creation in 4 months as has occurred over the last 12
years!

We have been repeatedly
warning of a slippery slope and an ultimate Dow to Gold ratio of 2, or even 1
based on our study of history.  Now, the
path on which we arrive there seems clearer.

As we discussed last week,
it seems highly unlikely that we will see the ‘V-Shaped’ recovery for which so
many are hopeful.  There are many reasons
for this, but the primary two are:

We see stocks as having more
potential downside from here – probably significant downside if the anticipated
economic forecast holds true.  A 30% to
50% decline in GDP in the second quarter of this year combined with a headline
unemployment rate of 15% to 25% will be ruinous for stocks.

These are truly historic
times.

At the same time, money
printing in quantities that could only be described as colossal will have to be
bullish for tangible assets at some future point.  That is an indisputable fact of history.

The immediate focus of
politicians and policymakers has been reacting to the economic chaos.  Over the past three weeks, 17 million people
have lost their jobs and filed for unemployment.  There are many more than this actual but
there are lots of reports of glitches in state unemployment systems that have
not made it possible for all those who are eligible to file.  We expect that this number goes significantly
higher before this curve flattens.

We are on the brink of the deflationary depression that we have been warning about since the book “Economic Consequences” was published in 2011.  Congress, the president, and the Fed are determined to do whatever it takes to avoid such an outcome.  So, they are responding by doing the only thing they know how to do – print, print, print.

Here’s the reality
though.  The $2.1 trillion stimulus
package is not a stimulus package, it a subsistence package.  This newly printed money will merely replace
some of the incomes lost as a result of the coronavirus constraints.

In other words, this initial
package is designed to prevent the plunge into a depression, it won’t provide
stimulus.  Look for more government
packages in the future funded by money creation.

So, when will the inflation
hit?

No one knows for sure.  But at this point, stagflation seems like the
most likely economic outcome as Michael Pento discusses with RLA Radio host, Dennis
Tubbergen on this week’s radio program.  This week’s Retirement Lifestyle Advocates Radio
Program is now posted at www.RetirementLifestyleAdvocates.com.

We do have a public educational webinar coming up this week as well.  This webinar contains information that our clients already have.  It is designed to educate and inform.  If you are not a client or our company but would like to learn more about current circumstances and strategies that you might employ to not only survive financially but possibly prosper, you may call the office to register at 1-866-921-3613.

If
you know of someone that might benefit from the information in this weekly
publication, direct them to get a free subscription at www.RetirementLifestyleAdvocates.com.

As
you all know, we respect the privacy of our subscribers and never inundate them
with e-mails.

Again,
blessings to all of you in these difficult times.  Stay safe.

“In times of change, learners inherit the earth; while the
learned find themselves beautifully equipped to deal with a world that no
longer exists.”