As we suggested last week, metals markets continued to consolidate after a big run-up.  Further consolidation or pullbacks are likely but long term, we expect precious metals to remain in a bull market. 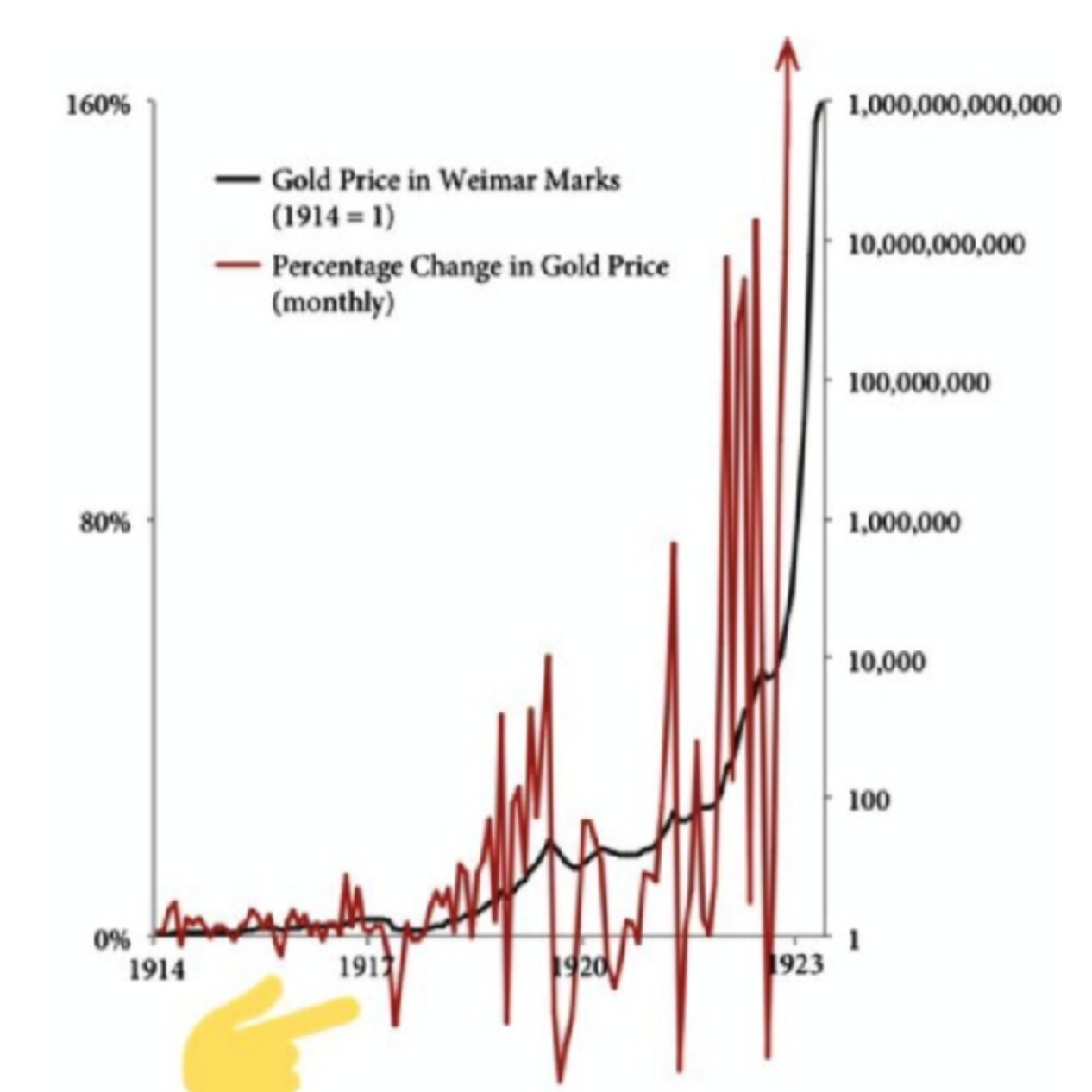 In the September issue of our client newsletter, the “You May Not Know Report”, we illustrate the volatility that has often existed historically in metals markets.  The chart on this page, published by past RLA Radio guest, Jay Taylor, illustrates the price volatility of gold priced in German Marks during the Weimar Republic hyperinflation.

While gold priced in German Marks increased by a rather remarkable factor of 100 trillion, it was far from a smooth ride as one can see from the chart reproduced here.

Also, in the September issue of the “You May Not Know Report”, we discuss three areas of dramatic change that is occurring due to Federal Reserve and political policy.  The piece was written from more of an opinion perspective but is based on facts and current trends.

To get to the point, where we live, how many of our children are educated, and how we receive healthcare are all changing quickly for many Americans.

Let’s begin with where we live.  As past RLA Radio guest Jim Rickards recently noted there is a lot of hard evidence to support the fact that those who have the ability are leaving big cities in droves.

Rickards states that there are three reasons for this migration and compares it to the Dust Bowl migration of the 1930’s when desperate people moved west to seek jobs in the California agricultural industry.  Now, ironically, the move is in the opposite direction.

The first reason is that millennials are getting older.  In just a couple of years, the oldest of the millennial generation will turn 40.  While city life is appealing to many, if not most twenty-somethings, it’s not as appealing to many who are approaching 40.

The second reason is the pandemic.  It’s no secret that rural areas have not been hit as hard as densely populated areas like New York City.

The third and primary reason is the riots.  Many city dwellers who fear for their safety and the protection of their property are simply leaving.

Rickards points out that those who are leaving the city are the people you don’t want to leave – those with assets, talent, and energy are those who have the option to exit.  Rickards notes that this will have a devastating economic impact.

Something similar is happening in education.

While many of those who have the financial ability to leave the cities are leaving, many parents who have the ability to pay to educate their children are also doing so, bypassing the traditional education system.

With many states mandating that classes be held remotely this fall; many parents are stepping up and taking responsibility for the education of their children.  Learning pods are gaining in popularity.  A learning pod has a few families who combine resources to hire a private teacher to educate their children.

We are aware of families with school-age children who are electing to establish learning pods.  One such family of which we are aware has teamed up with three other families and hired a full-time teacher to educate six children.  Each family pays a share of the teacher’s salary.

Healthcare is also changing since many “non-essential” medical services were suspended as part of the lockdown response to COVID-19.

There is a growing movement of physicians who don’t take health insurance and charge patients a monthly fee for access to health care.  These doctors are unaffiliated with a hospital or healthcare group and work independently.  These practices are known as direct primary care practices and they’re growing in popularity.

Yahoo News reports that monthly membership fees to join a direct primary care practice range from $50 to $150.  That fee covers office visits and the member patient typically gets drugs from the physician at much lower prices.

A direct primary care membership makes a lot of sense for many people but once again, it is only available to those with discretionary income.

Here’s the probable reality of these trends.

Once an affluent person leaves a city, they’re likely not returning.  Many families who decide to take control of the education of their children will find that they prefer the individualized instruction their children receive, and they won’t return to the traditional education system.  And, those who become members of a direct primary care practice may find it difficult to return to waiting a month or more for an appointment when choosing to get their medical care more traditionally.

The unintended consequence of these government policies is citizens taking action to avoid the regulations that negatively affect them.  Arguably, it has been these policies and the Fed enabling these policies via money creation that has been the primary cause of the wealth gap and social unrest.

The City of Detroit is a perfect example of failed regulation, failed bureaucracy, and unintended consequences.  The Model City program, initiated by President Lyndon Johnson in 1966 as part of his Great Society programs poured a total, of about $1 billion into the City of Detroit to attempt to revitalize the inner-city slums.

If you’re not familiar with the Model City program, here is some background as it relates to the City of Detroit.  In Detroit, the Model City program attempted to turn a nine square mile area into the government’s idea of a model city.  Government bureaucrats were telling people where to live, what to build, and which businesses should be opened and closed.  In return, people received cash, training, education, and healthcare.

Immediately after the Model City program was initiated, 22,000 middle- and upper-class citizens moved out of the city.  These folks simply didn’t like paying higher taxes and being told what to do.  In July of 1967, police attempted to break up a party in the middle of the new Model City; their efforts resulted in a race riot that was one of the worst of the 1960’s.  The Mayor of Detroit feared that additional police presence might only make matters worse, so he did nothing to stop the riots.  Five days later, President Lyndon Johnson sent in 2 divisions of paratroopers in order to settle things down.  Over the next 18 months, another 140,000 people exited the city, almost all of them middle and upper class.

Instead of coming to the realization that this type of central planning didn’t work, in 1974 the program was expanded under the Community Development Block Grant Program.  Under this program politicians and bureaucrats would decide which groups and individuals would receive funds for various renewal programs and efforts.  Despite these efforts, the exodus from the city continued.

Today, with the population of Detroit down to just over 700,000 from about 2 million in the 1950’s, the unintended effects of the Model City program are clear.

Pretty much the only folks left in Detroit are the ones who don’t have an option to leave.

Today’s policies are likely to have an even more devastating impact on the less affluent.  Not only will many big American cities meet the same fate as Detroit, education, and healthcare will also be negatively affected.

This week’s RLA radio show features an interview with the President of the Mises Institute, Mr. Jeff Deist.  Jeff is the former chief of staff for congressman and former presidential candidate (and also past radio guest), Dr. Ron Paul.

That interview is now posted at www.RetirementLifestyleAdvocates.com.

“When the federal government spends more each year than it collects in tax revenues, it has three choices; it can raise taxes, print money or borrow money.  While these actions may benefit the politicians, all three are bad for the American people.”