While there is no fundamental justification for it, stocks rallied again last week and rallied strongly.  The Dow Jones Industrial Average was 2.59% higher while the S&P 500 rose more than 3%. 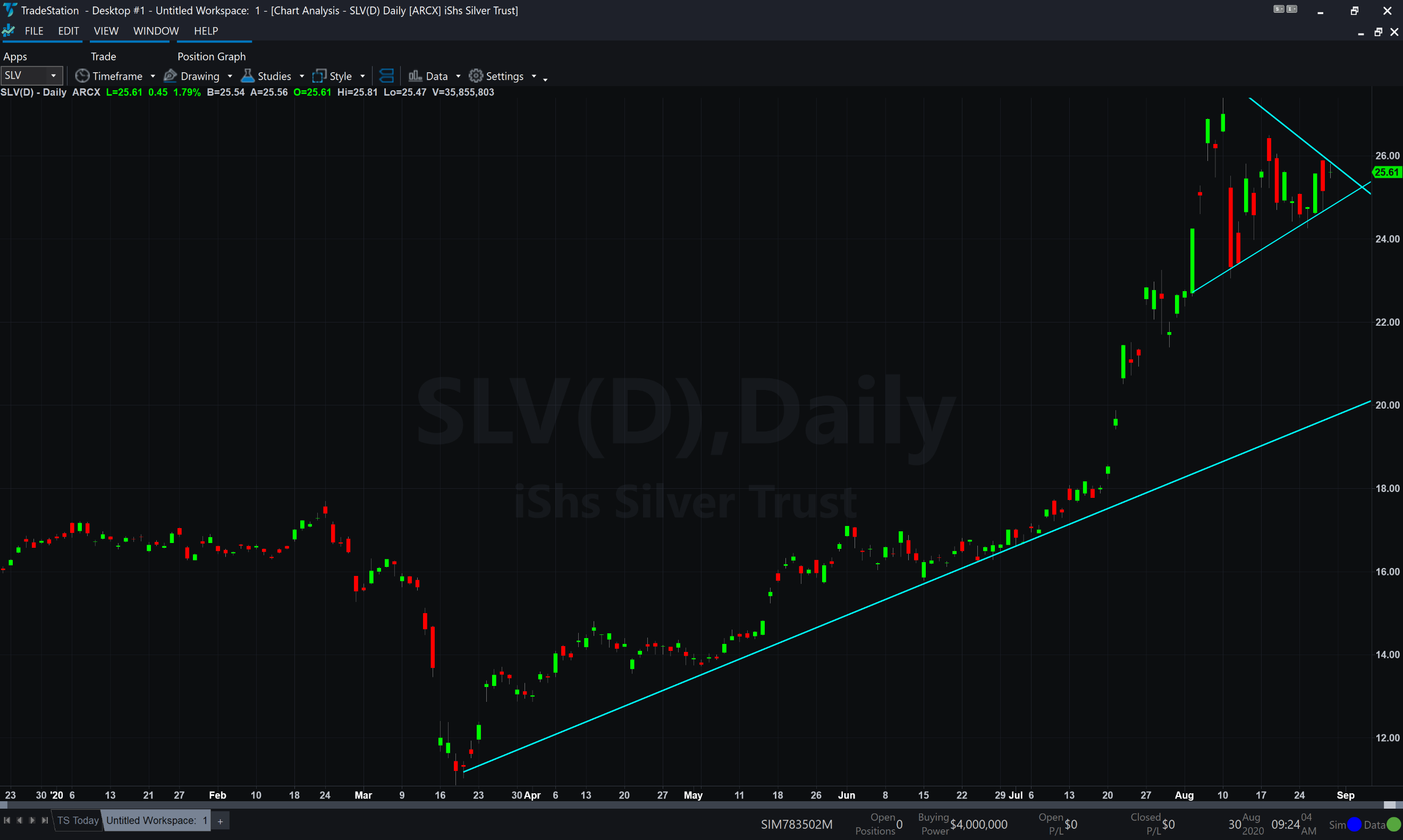 Stock valuations of the most popular stocks are nearly off the charts.  Call us old-fashioned by buying stocks with a price to earnings ratios of more than 1000 is foolish for all but the most speculative investors.  Some of these high-flying stocks have gains of 500% plus since the market bottom and have parabolic chart patterns. Historically speaking these parabolic chart patterns end badly.

Both stocks and metals have formed parabolic price patterns on the charts.  In prior issues of “Portfolio Watch”, we have suggested that gold and silver would need to consolidate or pull back before a price rally continued.  We are still of a mind that further consolidation or more of a pullback could happen.

Analysis of a current silver price chart shows that current prices are far removed from the up-trending line that began in March.  Often, prices pull back to the long term trend line.

As noted on the chart, there is also a pennant pattern forming which is often a continuation pattern.

Over the long term, we expect nominally higher gold and silver prices as central banks around the world continue to create more fiat currencies.  History teaches us that eventually, it’s highly likely we go back to a currency system based on gold, silver, or both.  In our view, that makes owning gold and silver in one’s portfolio essential.

As many of you are undoubtedly aware, the Fed this past week met virtually for it’s annual Jackson Hole monetary policy symposium.  During this meeting, the Fed announced that it will change its interest rate policy and keep interest rates low for the foreseeable future.  (Not really a policy change, just an official announcement.)

All 17 top Fed officials agreed to adopt a policy called “Average Inflation Targeting” which will allow inflation to run above the targeted 2% annual inflation rate for a period of time.

The Fed’s decision to “officially” change policy was not surprising to us.  The Fed actually made the decision to keep interest rates low for the near term back in May of 2019 when the Fed Funds rate began to be lowered.  The Fed Funds rate has fallen from 2.41% in April of 2019 to essentially zero at the current time.

With last week’s announcement, the Fed is “fessing up” to a policy that they have been pursuing for more than a year.

If you’re a savvy observer, there is a pattern here.

After the financial crisis more than one decade ago, the Fed elected to engage in an emergency measure that they called quantitative easing a.k.a. money printing.  Despite their insistence that this measure was a temporary measure required because of the extraordinary economic circumstances, at the time, we suggested the money printing would continue and intensify.

That is exactly what has happened as the Fed has expanded its balance sheet by printing more than $3.5 trillion this year alone.

Now, on top of massive money creation, the Fed has made the formal policy decision to allow the official inflation rate to run higher than the targeted rate.

This policy change was simply the next logical step that moves us further down the slippery slope of currency destruction.

This is evident when noting the disparity between the officially reported inflation rate and one’s actual day-to-day experience making purchases.

As Open Money co-founder, Jill Carlson opined, when the bill comes due, there are two ways out.  Option A is to hurt the poor with inflation and option B is to hurt the rich with taxation.  The Fed just made option A the official policy.

It’s our view that this policy combined with more ‘helicopter money’ which seems inevitable, makes a serious inflation in the relatively near future highly likely.

As Tom Luongo noted, “If we digitally airdrop 10% more money into everyone’s accounts, as the latest proposals from economists attached to the Federal Reserve suggest, then the general price level will, in fact, rise 10% if that money is spent on necessities.”

The data suggests that is where consumers are spending money.  Mr. Luongo suggests:

In an environment where most people’s time preference is short because they are literally fighting for their economic lives, this new stimulus money will go right into the things people needs right now — food, clothing, shelter.

Things are so bad for so many Americans now that they saved their first stimulus checks and only spent them on the bare necessities, forgoing any thought of paying down debt.

They used what’s left of their credit rating to feed themselves now on someone else’s dime and let the bank choke on their mortgage when the credit card is maxed.

To the casual observer, this helicopter money and stimulus spending is in response to the COVID-19 economic fallout which is undoubtedly a factor.  However, some critical thought has us concluding that the system is totally broken and a reset is on the way.

Prior to the financial crisis, money was loaned into existence.  Banks were required to reserve 10% of deposits and could loan out the balance.  When the Fed wanted to create more money, they would reduce interest rates which encouraged borrowing which in turn created more money.

At the time of the financial crisis, the Fed went back to this playbook and found that it didn’t work.  Interest rates at 0% did not spur borrowing so the Fed began a program of quantitative easing which had the Fed creating money out of thin air to buy securities from member banks.  The idea was that these banks would get rid of some of their ‘toxic assets’ (remember sub-prime mortgages) and clean up their balance sheets.  By law, the Fed could only buy government-backed securities; instruments like government bonds and government-backed mortgages.

This worked for a while but earlier this year as bank’s balance sheets contracted, the Fed began to loan money to the US Treasury to allow the Treasury to use SPV’s to begin to buy corporate bonds with newly created money loaned to the Treasury by the Fed. 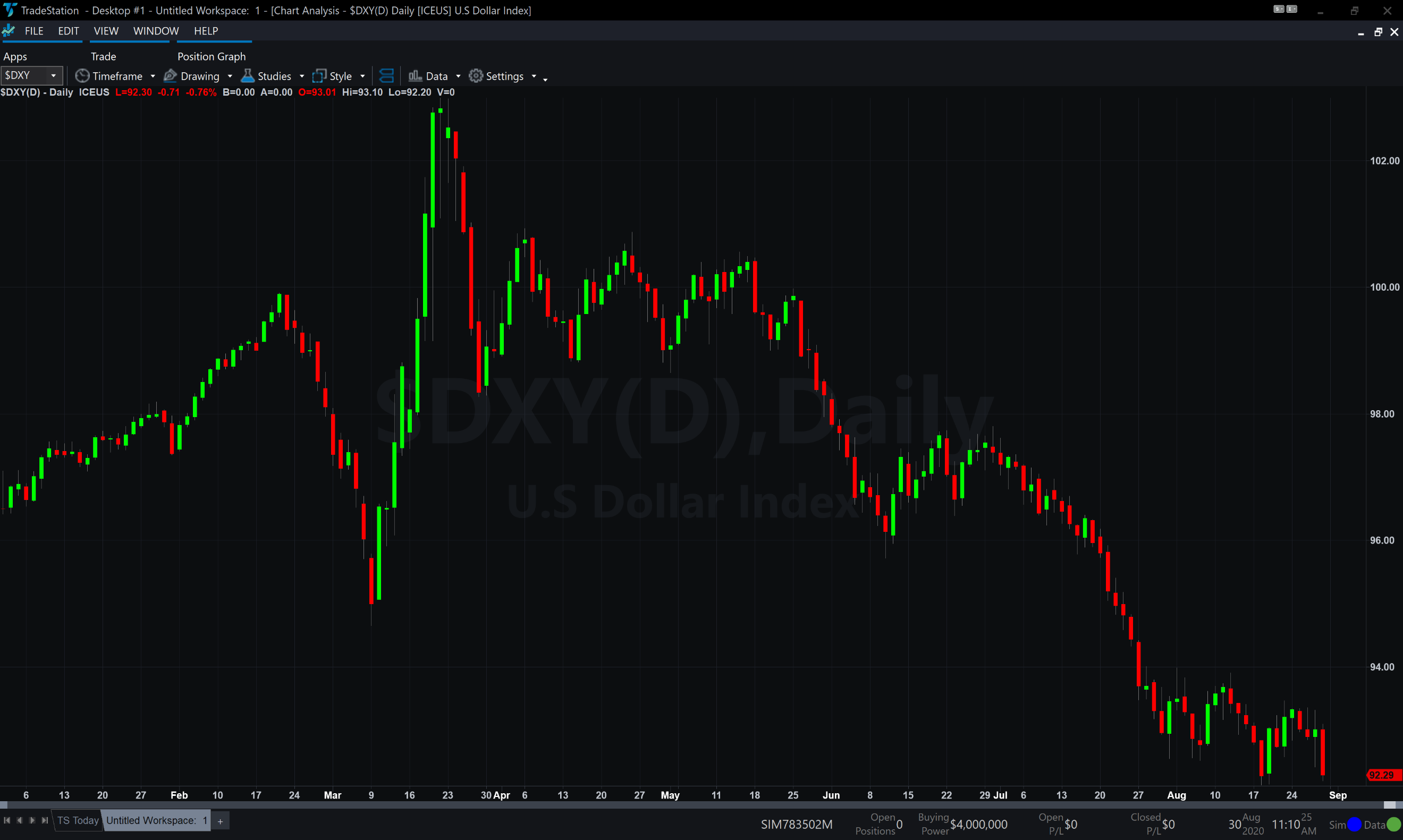 All these monetary experiments were implemented with the caveat that the Fed would keep an eye on their inflation target and reel in these easy money programs when inflation threatened.

While markets never go straight up or down, the Fed’s officially revised inflation policy seems to ensure that this trend will continue.

As we noted last week, inflation hurts the less affluent more than the affluent.

This week’s RLA radio show features an interview with Mr. Simon Popple, author of the “Brookville Capital Intelligence Report”.  Mr. Popple is an expert in mining shares and we pick his brain on the topic on this week’s program.

If you haven’t already done so, go to www.RetirementLifestyleAdvocates.com and download the RLA app.  Beginning in October it will be the only way to get this report as well as the podcast and webinar updates.

While the Fed’s officially revised policy is really nothing new, we are reminded of a quote that seems especially appropriate: