Stocks
continued their 2020 rally last week with the Dow Jones Industrial Average
climbing 1.82% and the Standard and Poor’s 500 advancing 1.97%.

The Dow to
Gold ratio which we wrote about extensively in last week’s “Portfolio Watch”
rose to 18.84.  With the exception of the
US Treasury long bond, all markets were up last week.

With the
advances experienced by stocks and gold, the Dow to Gold ratio didn’t change
significantly, remaining at about 18.5.

Stocks at
this juncture are overbought in our view.
The chart below illustrates the Standard and Poor’s 500.  It is a weekly chart with Bollinger Bands.  Bollinger Bands track price extremes.  Notice that stock prices are currently near
the top Bollinger Band on the chart.
Often, when this chart pattern occurs, a pullback in price follows.

For this
reason, we are of the opinion that a pullback in stocks could happen soon.

A couple of
weeks ago, here in “Portfolio Watch”, we discussed the SECURE Act, a recent law
change affecting retirement accounts.

In this issue, we want to zero in on one particular aspect of the SECURE Act that will affect anyone with an IRA, 401(k), 403(b) or other retirement accounts who leaves money to a non-spouse beneficiary at his or her passing. 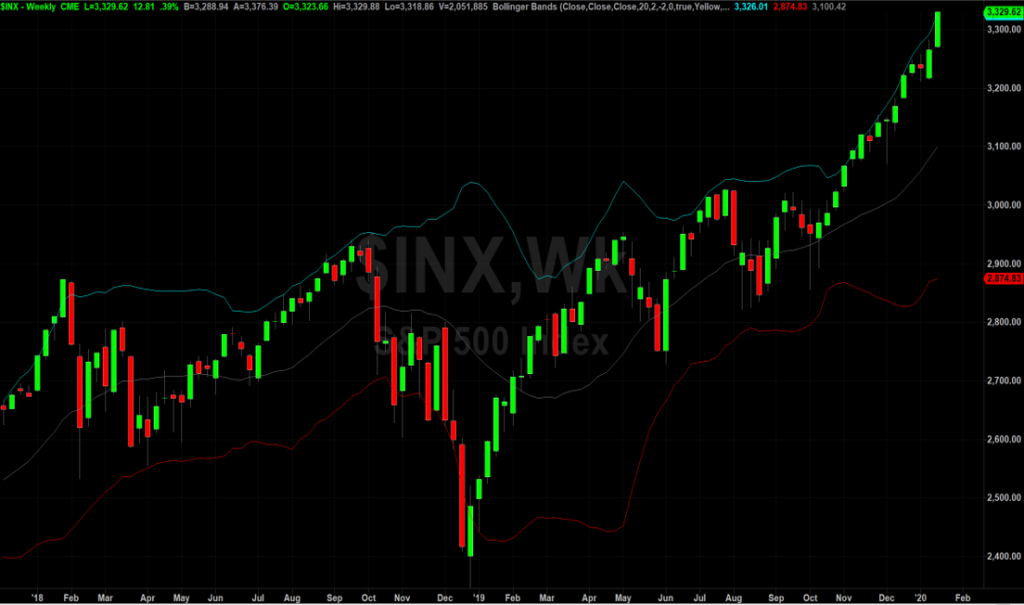 Prior to the passage of the SECURE Act, an heir who inherited an IRA had the option of doing a ‘stretch out’ IRA.  In essence, a stretch out allowed that heir, typically a child of the deceased IRA owner, could keep the money in an ‘inherited IRA’ and take required minimum distributions based on the heir’s remaining life expectancy.

Using this
stretch out strategy, it was possible for one who inherited an IRA to adopt the
inherited IRA and use it as his or her own retirement account.

Under the
new law, any inherited IRA must have the taxes paid on the inherited balance
within 10 years.  That totally kills the
stretch out strategy that so many had incorporated into their planning.

But there
may be a viable alternative for those who wish to use a stretch out type
approach in their planning.

This
approach is probably best explained through an example.

A 60-year
old single woman with three daughters has an IRA with a current balance of
$1,000,000.  She wants to use her
retirement account to provide income for her daughters when she passes.  Her daughters are presently 35, 32 and 30
years old.

She
establishes three charitable remainder trusts.
Each of these trusts has one of her daughters as the income beneficiary.

The level
of income that an IRA owner can draw from the charitable remainder trust must
be at least 5% of the trust balance and could be higher provided certain
minimum IRS rules are met.

Now, each daughter may be able to collect an annual income of $25,000 as long as she lives.  At each daughter’s passing the remaining trust balance passes to a charity.

Each
daughter will pay taxes on the income received each year; however, this
strategy can allow the IRA owner to establish a stretch-life vehicle to use as
part of an estate plan.

Another
nuance to this strategy that can be incorporated is the use of a relatively
low-cost life insurance policy to provide an additional tax-free benefit to
each daughter.

The life
insurance policy type that would work well in this design is a no-lapse
guarantee policy.  This kind of policy
guarantees that the policy won’t lapse before a certain age as long as the
premiums are paid on a timely basis.
Think about this kind of policy as a term life until you die policy.

It does not
build cash values.  It provides only
protection.

When one
considers the outlay versus return on a policy like this one, it can be very
favorable.

The
premiums for this no-lapse guarantee policy can be paid from the IRA.

Taxes will
be minimized and a charity that might not otherwise benefit gets named as the
remainder beneficiary and will ultimately receive everything left in the trust.

Arguably,
depending on one’s charitable intent, this can be an even better outcome than
using a stretch-out strategy.

Host, Dennis Tubbergen, chats with Mr. Tamny about his new book titled “They’re Both Wrong” and the ongoing automation trends in the workforce.

That
show is now available at www.RetirementLifestyleAdvocates.com.

There
are many other valuable resources available on that site as well.  We’d encourage you to visit the site and
check it out.

“Ability is what you are capable of
doing.  Motivation determines what you
do.  Attitude determines how well you do
it.”