Metals broke out last week.  Gold rallied 5.58% while silver advanced nearly 18%.  We believe this move is largely related to the extremely easy monetary policies currently being pursued by the Federal Reserve.

We have long been predicting a breakout in the nominal price of metals and it seems that last week may have been that breakout.  It’s always important to remember that markets typically don’t go straight up or straight down, so a pullback here would not be surprising.  But long-term we expect higher nominal gold and silver prices.

There is a great deal of debate among very bright analysts as to whether we see a deflationary outcome to the current economic situation or an inflationary outcome.  We thought it would be interesting this week to examine this question in a little more detail.

Since the vast majority of today’s money is debt, when debts go unpaid (defaults occur) money disappears from the financial system.  This is deflationary.

Money printing is inflationary.  The Federal Reserve has expanded its balance sheet (or printed money) to the tune of more than $3 trillion this year, that’s inflationary.

So, what will the ultimate outcome be?

A look at what has happened historically might help us sort this out.

At the time of the Civil War, when President Lincoln and congress changed the banking laws to allow the US Dollar to be backed by gold, silver, and government debt, money creation occurred, but gold was never completely abandoned. 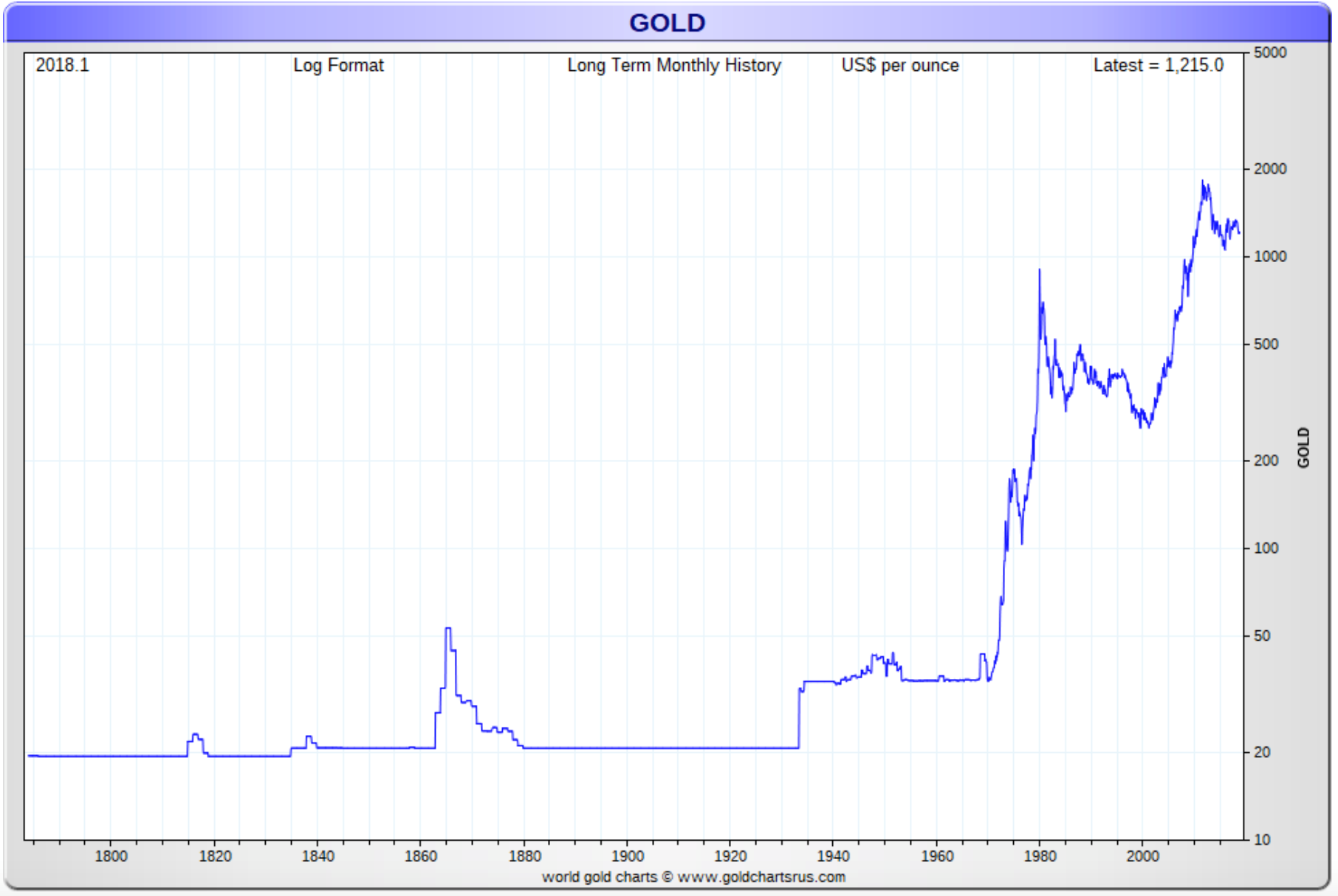 This change was necessary since there wasn’t enough gold and silver money in existence to fully fund the war.

It’s interesting that gold prices spiked as seen on the chart on this page.  Gold prices moved from $20 per ounce to $50 per ounce before reverting back to $20 per ounce when the country returned fully to the gold exchange standard.

About one year later, it took $1.25 in Confederate money to equal $1 gold-backed dollar – that’s 25% inflation in just one year.

That frightening level of inflation was largely driven by fear.  Consumers were willing to pay high prices for tangible goods assuming it was the lesser of two evils.  They could either hold the currency and hope it didn’t devalue as quickly or they could exchange the currency for a tangible good that might hold its value much better.

This fear is the driving force behind nearly every hyperinflation.

The Confederate Dollar, like every fiat currency, eventually failed.  The Union, on the other hand, did print money but they never completely abandoned the gold standard.

In order for a hyperinflationary climate to exist, there needs to be two elements.  One, the currency needs to be entirely fiat, and two, money printing has to be massive, something that cannot occur on a gold exchange standard. 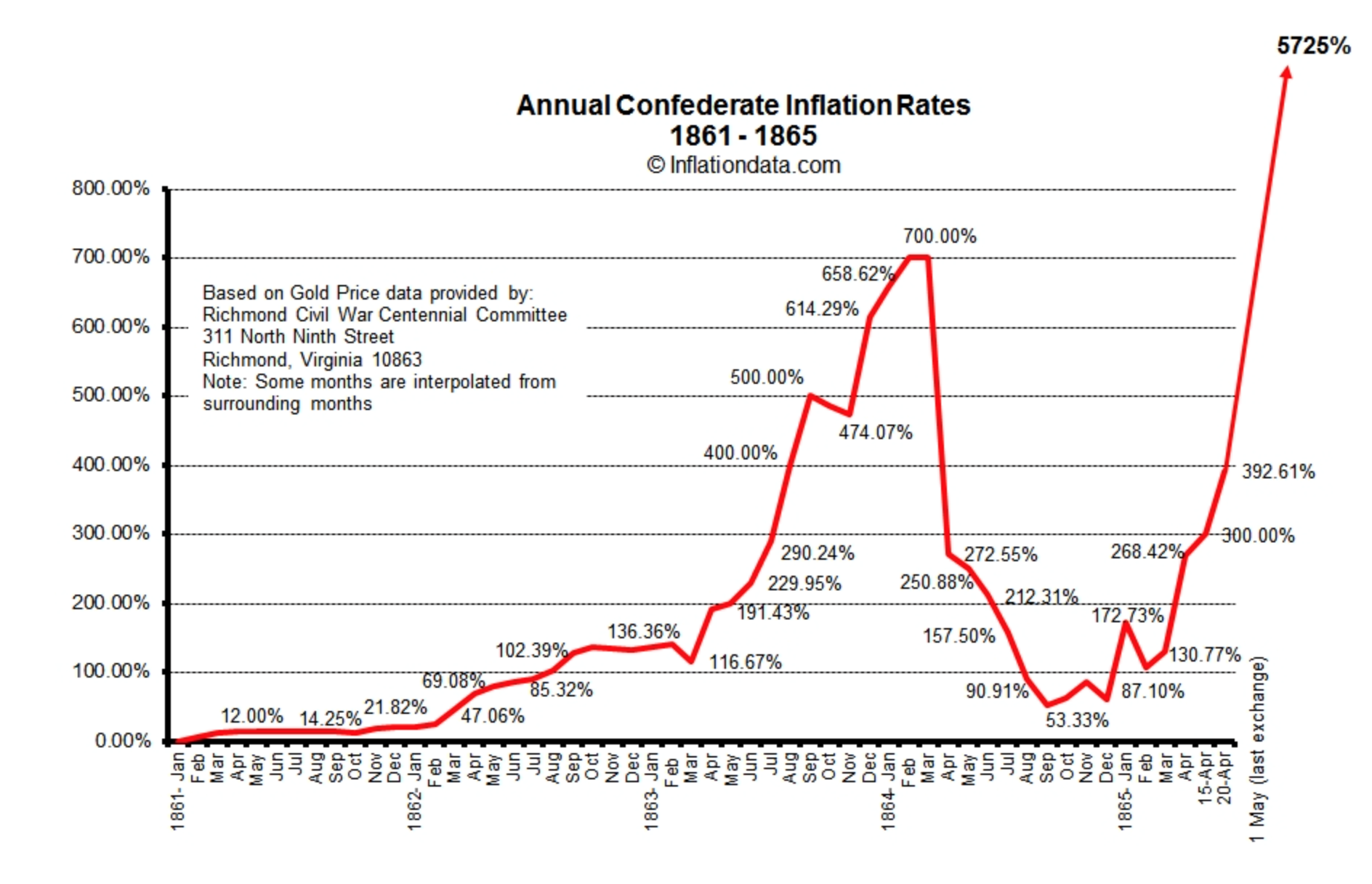 Notice that for a period of time, in 1864, inflation subsided for a short time.  The reason for this decline is that there was a currency exchange.  Citizens were required to exchange $3 in currency to receive $2 back in an effort to reduce the money supply and curb inflation.  While it worked for a short time, it caused inflation to spike to more than 700% prior to the exchange as citizens aggressively sought to exchange their fiat currency for tangible property.

In just four years, Confederate citizens saw their cost of living increase by a factor of 92.  Think about that for a moment.  If your household expenses are now $30,000 per year, in just four years those same expenses would total $2,760,000!

It’s important to note that at the present time, EVERY currency in the world is a fiat currency.  That’s the first condition for possible hyperinflation.

The second condition is that massive levels of money printing need to be occurring.  That condition also exists.

If at some future point, citizens begin to earnestly seek to exchange their dollars for tangible assets, hyperinflation could be triggered.  We believe this is where many analysts get in wrong.

These analysts state that you can’t have inflation without demand.  That’s not necessarily true.  Inflation, especially hyperinflations can occur when those holding a currency cease to trust that currency.  A study of the Confederacy and other hyperinflations brings us to that conclusion.

Gold tracks the real inflation rate.  This is the terrific point made by recent RLA Radio Program Guest, John Williams of ShadowStats.com.  It’s a very valid point when one studies history.  Go back and review the price of gold during the Civil War.

Or, review the chart of the price of gold in German Marks during the Weimar Republic hyperinflation after World War I.

Notice that once again, in this case, gold prices track the real inflation rate.

Or, take a look at the chart of gold priced in the Venezuelan Bolivar over the past couple of years.  Notice that the gold price tracks the inflation rate. 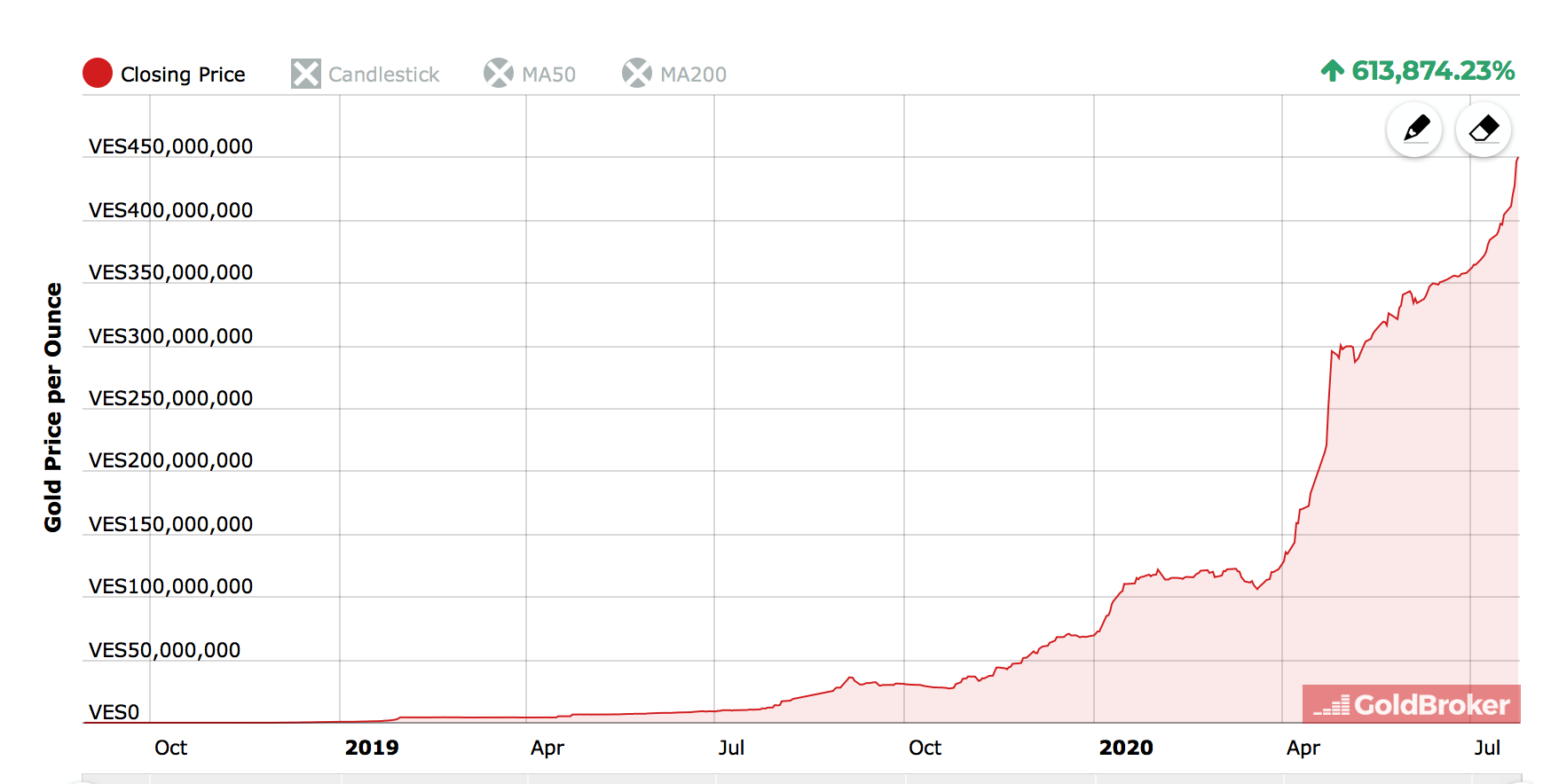 Finally, looking at the US Dollar Index, which measures the purchasing power of the US Dollar against the currencies of the 6 major trading partners of the United States, one sees that the US Dollar is more than 8% lower since the first part of April when the massive money creation began.

Keep in mind that all of the currencies against which the dollar is compared are fiat currencies which are also being devalued.  The US Dollar is just being devalued at a much faster pace, at least for now.  That helps explain the big jump in the nominal price of precious metals when priced in US Dollars as well.

Thank you for your feedback on our weekly client webinars!  If you are not participating but would like to receive an invitation, give the office a call at 1-866-921-3613.

And, thank you for your referrals!

This week’s RLA radio show is now posted at www.RetirementLifestyleAdvocates.com.  This week’s program features an interview with John Rubino of dollarcollapse.com and the author of the now prophetic book “The Money Bubble”.

During this interview, I get John’s forecast for the markets, the US Dollar and get his take on what you should be doing with your money now.

“I could tell my parents hated me.  My bath toys were a toaster and a radio”