All markets advanced last week with the exception of the US Government long bond which saw its yield rise to 1.43%.  The Dow to Gold ratio remains between 14 and 15.

As we note in this month’s “You May Not Know Report” which will be mailed in about one week, there are two schools of thought as to where the economy and financial markets go from here given that debt levels are extreme and money creation is off the charts.

Those analysts who believe debt levels will dominate economic activity moving ahead are those who are in the deflation camp.  Excessive debt levels are deflationary.  Banks, which have debt as assets, can become insolvent when massive levels of debt go unpaid.

There are other analysts who are of the mind that excessive money creation will dominate in the future.  At a certain level of money creation, inflation is the only possible outcome.

On our radio program, we interview some very bright economists and financial commentators.  One thing is sure – there is not a common, widely accepted opinion.  That’s why in the book “Revenue Sourcing” we advocate using a revenue sourcing map to protect yourself from either outcome.

Given the extremes at which we find ourselves currently, we are confident that the outcome will also be extreme.  Once one fully understands the economic data, it’s absolutely impossible to imagine how investing the traditional way will produce the same outcome that it’s delivered historically.

The first and very real threat to your finances is the solvency of the banking system.  This was the issue during the financial crisis and looking at the data, it’s likely going to be an issue again, probably soon.

Egon von Greyerz, the founder of Matterhorn Capital Management in Zurich, recently noted in a piece he published that there is a very strong historic correlation between the unemployment rate and commercial loan defaults.  He published this chart to provide an illustration. 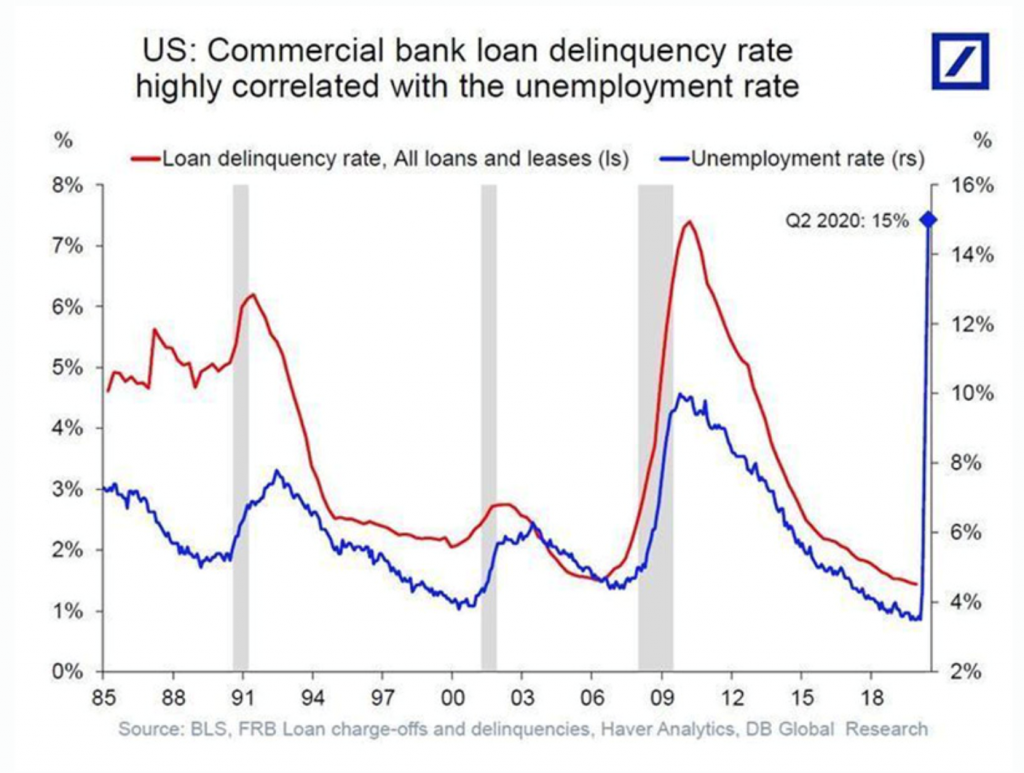 While there is some debate about the true current unemployment rate given the calculation methodologies used, by eyeballing the chart, one might easily conclude that the commercial bank delinquency rate could exceed 12%.

Mortgage loan delinquency rates more than doubled from March to May and that’s with the extra $600 per week in federal unemployment benefits still being paid.  Those benefits are set to stop at the end of this month.

We expect delinquency rates to jump significantly as a result; our best estimate would be 20%, perhaps as high as 30%.

Most of the loans that are currently delinquent have not been reported by the banks.  But these bad loans will be reported over the next quarter or two.

Alasdair Macleod, an analyst who has been a past guest on our radio program had this to say about debt levels, the banking system and the response by the Federal Reserve (emphasis added):

But for now, monetary policy is to buy off all reality by printing money without limit and almost no one is thinking about the consequences.
Transmitting money into the real economy is proving difficult, with banks wanting to reduce their balance sheets, and very reluctant to expand credit. Furthermore, banks are weaker today than ahead of the last credit crisis, and payment failures on the June quarter-day just passed could trigger a systemic crisis before this month is out.
Sooner or later bank failures are inevitable and will be a wake-up call for markets.  Monetary inflation will then become an obvious issue as central banks and government treasury departments become desperate to prevent an economic slump by doing the only thing they know; inflate or die.
Foreigners, who are incredibly long of dollars and dollar assets will almost certainly start a chain of events leading to significant falls in the dollar’s purchasing power. And when ordinary Americans finally begin to discard their dollars in favor of goods, the dollar will be finished along with all fiat currencies that are tied to it.

Since banks are experiencing loan delinquencies and soon loan defaults, they are not in a hurry to extend credit to customers.  Since the last several economic expansions were fueled by debt accumulation, when debt accumulation stops, the economy stops with it.

Mr. Macleod published this chart to demonstrate the banks’ balance sheets have begun to contract. 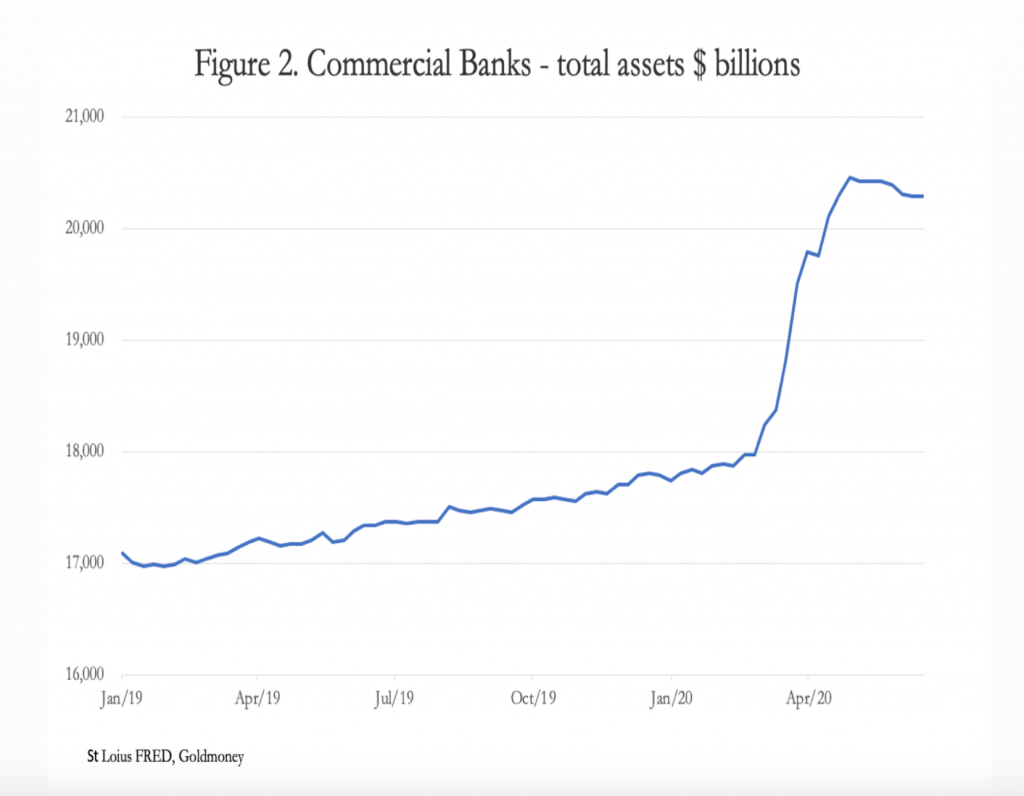 Following Lehman’s failure, a similar pattern to the one unfolding today of a rapid increase in bank assets through the newly invented QE was followed by a contraction of bank credit which lasted about fifteen months. But that crisis was about financial assets in the mortgage market, which had knock-on effects in the non-financials. Difficult though it was, its resolution was relatively predictable.
This crisis started in the non-financials and is, therefore, more damaging to the economy; its severity is likely to lead to a banking crisis far larger than the Lehman failure and possibly greater than anything seen since the 1930s depression.
Commercial bankers are now waking up to this possibility. For them, the immediate danger is associated with this quarter-end just passed, when demand for credit to pay quarterly charges increases significantly. Already, businesses are in arrears as never before, with many shopping malls, office blocks and factories unused and rents unpaid. It is this problem, shared by banks around the world, which due to the severity of current business conditions is likely to tip the banking system over the edge and into an immediate crisis. The extent of the problem is likely to be revealed any time in this month of July.

Bank failures are deflationary by nature as the money supply contracts as borrowers’ default on debt.

Mr. Macleod states that since this crisis is a far larger one than Lehman was, the bailout required will be far larger and there is only one way that such a bailout will be funded – more money printing.

This will lead to stagflation, a condition under which the economy sees low output but rising, likely rapidly rising prices.

Mr. von Greyerz, referenced above, noted that since COVID-19 hit, world governments and central banks have borrowed and printed a combined total of $18 trillion.  Mind-boggling.

To help put that number in perspective, if you counted quickly and never made a mistake, it would take you 32,000 years to count to a trillion.

If you’ve not already done so, we would suggest that you consider owning some precious metals.  If you’re unsure as to how to get started, give the office a call at 866-921-3613 and we’ll arrange a free, no-obligation, educational call to help you understand your options.

We’d also suggest checking out the safety rating of your banking institution.  Given the high probability of bank failures moving ahead, diversification with your cash assets is also advisable.

This week’s RLA radio show is now posted at www.RetirementLifestyleAdvocates.com.  This week’s program features an interview with David McAlvaney.

Mr. McAlvaney is a returning guest and an expert in precious metals and currency cycles.

There are also other resources posted there as well as all past podcasts of the radio program.

“Never underestimate the power of stupid people in large groups.”