After a big “up” week two weeks ago, stocks declined hard once again last week as the volatility in the stock market continues.  As we have noted, we remain skeptical of the recent rally in stocks as valuations are now, once again at historical extremes.

This will mean a lot more downside for stocks, a lot more upside for gold, or some combination of each.  This will probably not happen quickly, but rather over a longer period of time like it did in 1929.  See the charts below to note how similar the market is behaving presently to its behavior 90 years ago.

We have long been tracking both deflationary trends and inflationary trends to better advise clients as to how to adjust their portfolios.  Long-time readers of this publication and our clients know that we have long advocated the two-bucket approach to managing investment assets to help protect assets from both eventual outcomes.

Evidence of an initial deflationary period is already beginning to emerge. 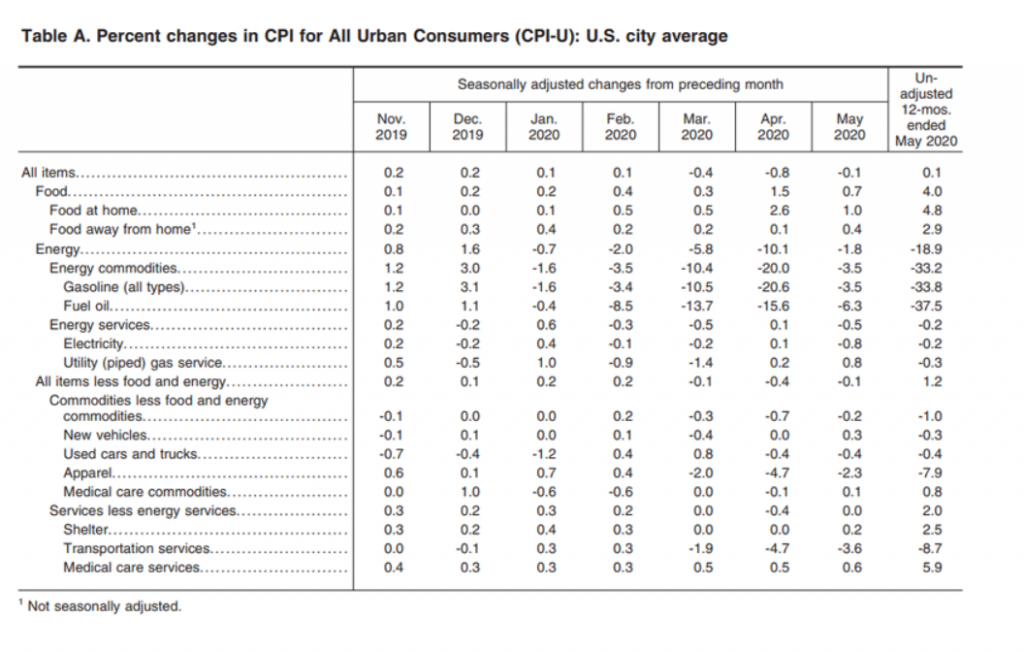 The chart illustrates price activity of various items for the 12-month period ending May 2020.

One notable exception to this deflationary price action is food costs.

We believe that these signs of deflation will continue to appear until such time as we reach a ‘tipping point’ and the money creation turns deflation into inflation.

We also believe, as we noted last week, that the likelihood of a “V-Shaped” recovery is slim.  Dismal economic activity will, in all likelihood, lead to even more aggressive monetary response by the Federal Reserve.

Severe economic recessions often feature what might be called an “incubation phase,” where an exuberant rebound from initial stock market losses becomes detached from the quiet underlying deterioration of economic fundamentals and corporate balance sheets.

Part of the current enthusiasm of investors seems to be the idea that the stock market typically reaches its low before the economy does (though this was certainly not true of the 2001 recession). On the idea that the second quarter of 2020 will be the low point for the economy, there is a superficial sensibility in “looking over the valley.” The problem is that post-recession bull markets typically begin at valuations about 40% of those we observe at present.

Investors make the same mistake when they observe that the stock market essentially went nowhere between 1918 and 1920 despite the Spanish Flu pandemic and then launched into a bull market that extended for nearly a decade. What this argument fails to observe is that market valuations between 1918 and 1920 stood at less than a quarter of current levels, representing the most steeply undervalued period in U.S. history. So yes, if the U.S. stock market loses three-quarters of its value from current levels, I expect that stocks would become fairly resilient in response to additional negative developments and would likely enjoy an extended bull market from those levels.

It’s sometimes said that “risk happens fast.” Yet underlying financial damage often has a long and quiet incubation phase, which is why Hemingway, in The Sun Also Rises, described bankruptcy as occurring “gradually and then suddenly.”

The current “incubation phase” is reminiscent of 2008. Early that year, AIG admitted that it could not “reliably quantify” its losses. In March, Bear Stearns failed. The Associated Press published an article discussing the unprecedented interventions by the Federal Reserve, including Bernanke’s creation of “Maiden Lane” shell companies to absorb bad mortgage-backed debt (which at least represented collateralized debt, unlike the uncollateralized corporate debt the Fed is illegally purchasing today). The article quoted Richard Fuld, the CEO of Lehman Brothers, who argued that this intervention, “from my perspective, takes the liquidity issue for the entire industry off the table.” Clearly, it did not remove the solvency issue.

After the failure of Bear Stearns, after strains in the subprime loan market were fully recognized, and after the Federal Reserve and the U.S. Treasury had already launched unprecedented interventions, the S&P 500 advanced in May 2008 to a level that was within 9% of its October 2007 peak, on the notion that all of the bad news had been “discounted.” The S&P 500 then lost 53% of its value.

The same sort of slow incubation characterized the financial markets in May 2001. An economic recession had already started two months earlier, and the S&P 500 had been in a bear market for over a year. But as the S&P 500 rebounded within 14% of the March 2000 bubble peak, the Wall Street Journal observed: “Though economists are expecting this year to be the economy’s worst since 1991, only a tiny percentage think the economy is in a recession.” The S&P 500 would lose an additional 40% of its value by October 2002, and the technology-heavy Nasdaq 100 would lose an additional 60% of its value, bringing its overall bear market loss to 83%.

As we have often stated, markets don’t go straight up or straight down.  As Mr. Hussman points out, in 2008 and in 2001, there was an initial decline, followed by a strong rally which was followed by the big decline.  We expect that is what will occur once again.

The Dow declined initially by a little more than 40%, not much different than the 38% decline stock investors experienced this year.  Then, the market rebounded about 50% before the real decline commenced. 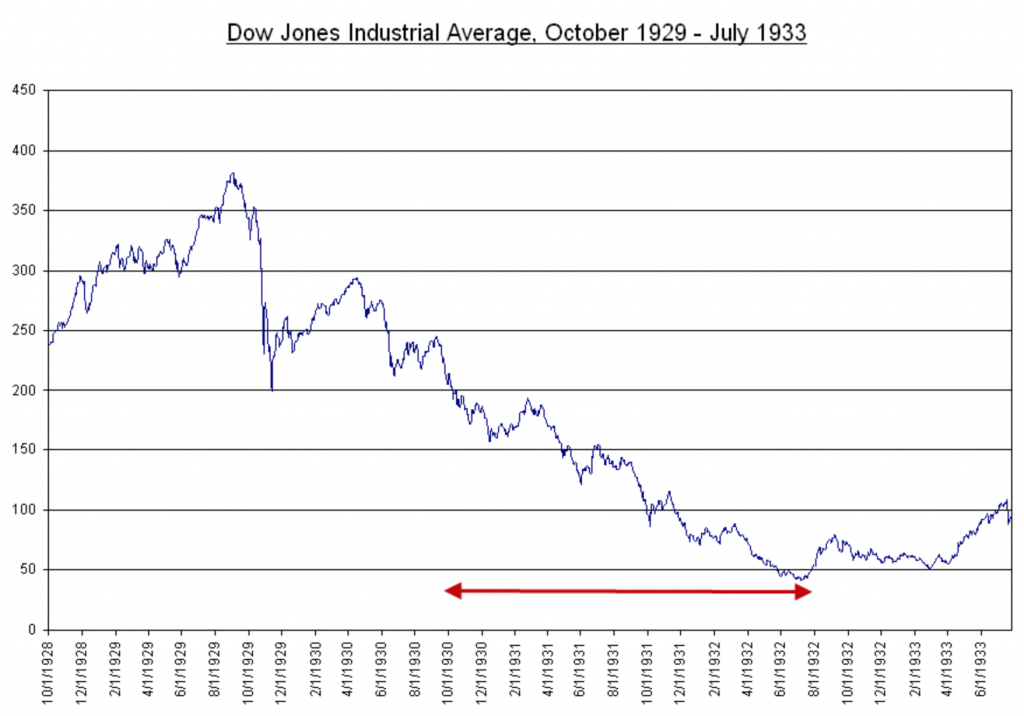 Prior to this week’s decline, stocks had rallied about 50% from their low.

And, with valuations at historic highs, this is not a good time to hold stocks in our view.

A major stock decline would also be deflationary – for a while.

As we noted last week, the Fed is not just engaging in massive amounts of money creation, since March, banks have had a zero-reserve requirement.  These policy responses are inflationary.

The trouble with this response is that it’s not immediate cause and effect.  In other words, it takes time for the effects of money creation to manifest in the economy.  History teaches us that policymakers always go too far when it comes to money creation, especially when the only other option is severe, painful austerity.

We have to assume this time will be no different.

What we don’t know is when the inflationary ‘tipping point’ will occur.  But we do know it will have to occur.  As we also often state, the ‘what’ is easier to predict than the ‘when’.

But the current situation is unfolding as outlined in the best-selling book, “New Retirement Rules”, which is where the two-bucket approach was first unveiled.  In that book, the same point was made – the money printing could continue for a while but not forever.  In the words of the late economist Herbert Stein, “If something cannot go on forever, it will stop.”

As we have been noting, we believe the two-bucket approach remains the best tactic to utilize in your portfolio from our perspective since the timing of the transition from deflation to inflation is very difficult to determine.

This week’s RLA radio show is now posted at www.RetirementLifestyleAdvocates.com.  There are also other resources posted there as well as all past podcasts of the radio program.

The book “Revenue Sourcing; The Retirement Planning Strategy for the Post Pandemic Economy” by Dennis Tubbergen has reached #1 best-seller status in 4 Amazon categories.    Thank you for your interest and support!   The book is available on Amazon.

The following quote is presented for two reasons.  One, in defiance of those who would tear down statues of the founding fathers.  And, two, for those who think a less than honest media is only a current problem.

“Advertisements…..contain the only truths to be relied on in a newspaper.”