Stock market activity last week and the jobs report created positive economic and financial news last week.  This activity seems to support the idea of a “V-shaped” recovery, something we said last week was unlikely.

On June 5, the Bureau of Labor Statistics reported that nonfarm payroll employment grew by 2.5 million.  That reduced the unemployment rate to 13.3%.  It’s important to understand that is the headline unemployment rate and excludes those who are working part-time but want to work full time and those that have dropped out of the labor pool and are not actively seeking employment.

Nevertheless, the numbers are much better than the majority of analysts anticipated.

The Bureau of Labor Statistics did point out that there was a “misclassification error” that, when corrected, would result in the actual unemployment rate coming in about 3 percentage points higher. (Source:  https://www.washingtonpost.com/business/2020/06/05/may-2020-jobs-report-misclassification-error/)

In our June newsletter “The You May Not Know Report”, we discuss the fact that today’s money is debt; money ceased being an asset with the abandonment of the gold-exchange standard in 1971.

That being the case (review the newsletter for a full explanation), when debt is paid down, money disappears from the financial system.  When borrowing slows or stops, money creation does the same.  That’s why the Federal Reserve has been printing new currency since the financial crisis but has accelerated that activity of late.

As money disappears from the financial system, it’s deflationary.

Shockingly, last month consumer credit declined the most in any month since 1943.

Consumer borrowing declined in April by the fastest rate since 1943 as credit card use saw a record decline, according to Federal Reserve data released Friday. Total consumer credit decreased at a 19.6% rate or $68.8 billion in April. Economists have been expecting a $14 billion fall, according to Econoday. Revolving credit, like credit cards, dropped a record 64.9% in April. Nonrevolving credit, typically auto and student loans, fell 4%. The data does not include mortgage loans. The savings rate hit a record high in April as spending dropped and Americans received stimulus checks from the government.

Bottom line:  consumers are saving and not borrowing.  And, the rate at which consumers are borrowing has fallen off completely.  That’s deflationary.

The mindset of most Americans has changed to ‘keeping your powder dry’ and ‘saving for a rainy day’; good long-standing advice when it comes to finances.

The US economy is more than 70% dependent on consumer spending and this new attitude of saving and not spending and not borrowing to spend will be a drag on the economic recovery moving ahead.

It’s our view, as we have stated, that many would-be entrepreneurs will have the same reserved posture when it comes to reinvesting in the economy.  It will be difficult to justify an investment in a new business with the threat of a future shutdown from an overreaching government.

While a bounce in the economic data as the economy opens is to be expected, it’s doubtful that a full recovery is around the corner because of this new mindset.

Meanwhile, the Federal Reserve continues to pursue massive money printing.  The latest move by the Fed has the central bank printing currency to loan to states and municipalities that are financially distressed.

This from “Route Fifty” on June 3:  (Source:  https://www.routefifty.com/finance/2020/06/federal-reserve-lending-program-expansion-small-cities/165889/) (emphasis added):

The Federal Reserve will expand a $500 billion lending program intended to help state and local governments deal with coronavirus-related financial difficulties so that at least two cities or counties will be eligible to participate directly in the initiative in each state.

Up to this point, the Municipal Liquidity Facility was open to states, as well as counties with at least 500,000 residents and cities with at least 250,000. But some states didn’t have any local governments that reached those population thresholds.

Governors in 20 states will gain the ability to designate at least one additional city or county to participate in the program under the updated rules, according to guidelines issued Wednesday.

Fed Chairman Jerome Powell hinted during congressional testimony in May that the central bank was considering expanding the program so it covered more local governments in states that don’t have heavily populated cities and counties.

Under the revised rules, governors in each state will also be able to tap two entities that generally depend on “operating government activities” for revenue to participate in the program. These entities might include transit agencies, airports, toll roads, or public utilities.

States previously could—and still can—borrow through the program and then transfer the money down to the local level, acting as intermediaries for local governments. But the new rules would grant more government entities direct access to the liquidity facility.

The facility was launched in order to help ensure that states and local governments can borrow at reasonable interest rates to meet their near-term liquidity and cash flow needs at a time when the coronavirus outbreak has upended the economy and undermined a range of tax revenues.

It goes without saying that the Fed will simply print the money that it will loan to states and municipalities.  That will be inflationary.

John Williams, economist, who has the website shadowstats.com (who will also be a guest on an upcoming RLA Radio program) thinks that inflation will be here sooner than later.

Mr. Williams has long been of the opinion that the US would hyperinflate the dollar to deal with unsustainable deficit spending and debt levels that are completely unmanageable.

John, in his recent newsletter update, offered these points:

-Product shortages have begun to surface.  This tends to be inflationary.

-Year-to-year, the M1 money supply level has increased by more than 25%.  That’s inflationary 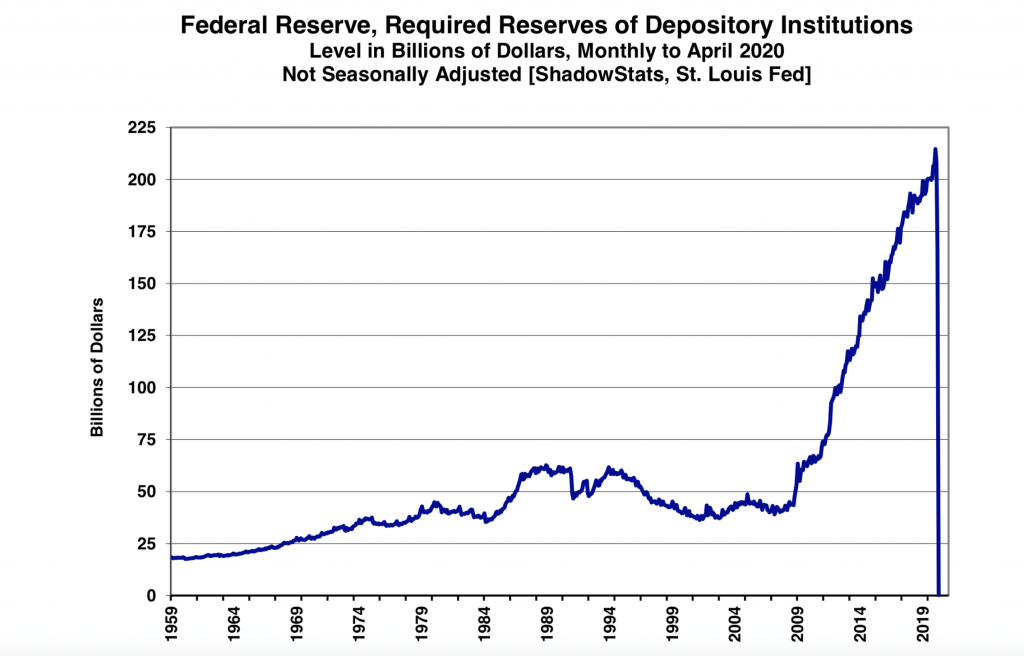 How does it make you feel knowing that your bank isn’t required to keep any reserves on hand?

This is an extreme monetary policy on which mainstream news media does not report.  But take a look at this screenshot from the Federal Reserve’s website:

We believe the two-bucket approach remains the best tactic to utilize in your portfolio from our perspective since the timing of the transition from deflation to inflation is very difficult to determine.

This week’s RLA radio show is now posted at www.RetirementLifestyleAdvocates.com.  There are also other resources posted there as well as all past podcasts of the radio program.

The book “Revenue Sourcing; The Retirement Planning Strategy for the Post Pandemic Economy” by Dennis Tubbergen has reached #1 best-seller status in 4 Amazon categories.    Thank you for your interest and support!

“I was married by a judge.  I should have asked for a jury.”