Stock
bloodbath.  That about sums it up after
the worst week for stocks since the financial crisis.

We have been writing about the volatility of stocks of late in this publication and have been publishing our long-term forecast for the Dow to Gold ratio for many years.  For new readers, the Dow to Gold ratio is calculated by taking the value of the Dow Jones Industrials and dividing by the price of gold per ounce.  As the databox above reflects, that ratio now stands at about 16.

Our long
term forecast for this ratio is 2, more likely 1.  Granted, it may take a while to get there,
but given all the artificial stimulus that has been used to prop up the stock
market, we expect the ultimate bust to be 1929 like.

For those readers
who believe that we have free markets, let this short piece serve as a quick
primer and a wake-up call to taking steps to protect your assets.  A word to the wise, no matter what your
relationship is with your broker or advisor, no one cares as much about your
money as you do.

Back in
1988, after the ‘flash crash’ in the stock market, President Reagan put in
place a group known as the Working Group on Financial Markets.  In 1997, “The Washington Post” coined the
term “Plunge Protection Team” to describe the group.  The group was created by the president’s
executive order (Executive Order 12631) and was charged with "enhancing the integrity, efficiency, orderliness, and
competitiveness of our Nation's financial markets and maintaining investor
confidence."

The original purpose of the group was to report on the market events of October 19, 1987, or “Black Monday”.  It was during that time that the Dow Jones Industrial Average fell 22.6%, rattling the confidence of investors and creating panic in the markets.

Yes, the Plunge Protection Team does exist.  This from “Seeking Alpha” in December of 2018
(Source:  https://seekingalpha.com/article/4230043-plunge-protection-team-to-strike-again):

In plain English,
monetary sovereign currency creation powers are being used to make the markets
maintain stability. Treasury funds are made available, but the WGFM is not
accountable to Congress and can act from behind closed doors.

This illustrates how
central banks can create money electronically without causing consumer price
inflation, rather than taxing populations to pay for government budget
deficits.

The PPT is meeting at
this very moment.

The main reason we
have a stock market plunge at the moment is the general withdrawal of world
Central Bank liquidity support.

The same
thing happened in 2015-2016 and the world stock market response was the
same.

A
withdrawal of central bank liquidity that began in 2014-15 resulted in a stock
market and GDP slump twelve months later.

So, let’s look at this.  What does ‘monetary sovereign currency
creation powers are being used to make the markets maintain stability’ really
mean?

Money is/was being created to
stabilize the markets.  Need a stock
rally?

In comes the Plunge Protection Team
to save the day.  On the committee is the
Chair of the Federal Reserve, the nation’s central bank.  A stock rally can be fueled by throwing newly
created currency in the markets.

Skeptical?  We don’t blame you, but here is a quote from
an interview with Richard Fisher, former member of the Federal Open Market
Committee (Source: www.cnbc.com/2016/01/06/dont-blame-china-for-the-market-sell-off-commentary.html) (emphasis
added):

“I spent 10 years (through last March) as a
participant in the deliberations of the Federal Open Market Committee, setting
monetary policy for the U.S. The purpose of zero interest rates engineered by
the FOMC, together with the massive asset purchases of Treasuries and agency
securities known as quantitative easing, was to create a wealth effect for the real economy by
jump-starting the bond and equity markets.

The impact we had expected for the economy and
for the markets was achieved. By February of 2009, the Fed had purchased over
$1 trillion in securities. With interest rates throughout the yield
curve moving in the direction of eventually resting at the lowest levels in 239
years of history, the stock market reacted: It bottomed in the first week of
March of 2009 and then rose dramatically through 2014. The addition of a third
round of QE, which had the Fed buying $85 billion per month of securities to
ultimately expand its balance sheet to over $4.5 trillion, juiced the
markets.”

The Fed printed
$1 trillion and dumped it into the financial markets.  As Mr. Fisher so plainly stated, the Fed
“juiced the markets”.

Quietly and
unbeknownst to the average IRA or 401(k) investor, the Fed manipulates
markets.  Stock markets and bond markets
are being artificially influenced to attempt to achieve a desired outcome.

So, if that’s the
case, what happened this week?

Is the
coronavirus to blame.  Mostly not in our
view.

The market
fundamentals have been screaming correction for a long time as we’ve often
written here.  Significant market
corrections typically begin when stocks are overvalued and margin debt levels
are high.  Then a “black swan’ event occurs,
and the market correction begins.  That’s
how we view the current situation (we are not attempting to trivialize or
minimize the coronavirus situation, only look at it from the perspective of the
massive market correction that occurred this week).

One of the most common methods used to value stocks is the price-to-earnings ratio.  This ratio is calculated by taking the price of stocks and dividing by earnings.  The higher the number, the more overvalued stocks are.

Notice from the
chart on this page that the current 10-year P/E ratio average was slightly
higher than in 1929.  Only once have
stocks been more overvalued and that was prior to the tech stock bubble
collapsing. 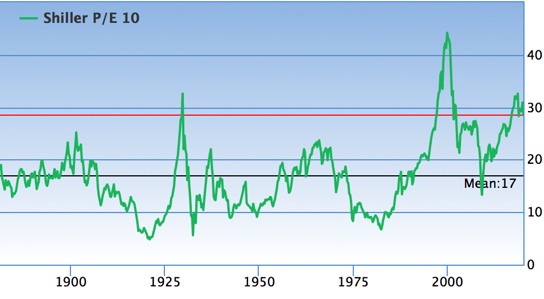 To muddy the
water up a bit when it comes to calculating P/E ratios, as we have reported
here in “Portfolio Watch”, many publicly traded companies have been buying back
shares of their stock.  This once illegal
practice increases earnings per share but not by increasing company
earnings.  Higher earnings per share is
accomplished by having fewer shares outstanding. 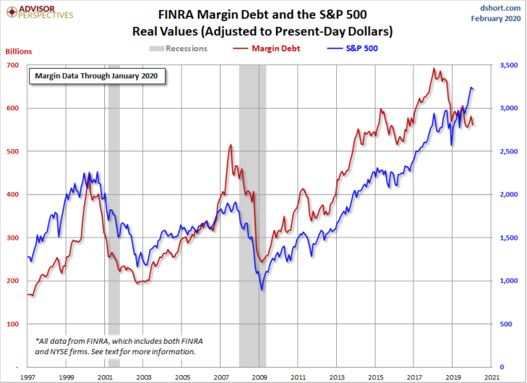 We expect the
Plunge Protection Team and the Federal Reserve to pull out all the stops.  Look for interest rate cuts for sure in our
opinion.

But the reality is still the reality.  Stocks have long been artificially manipulated.  Basic laws of economics tell us that cannot go on forever.

Can the Fed and the
PPT squeeze some more juice out of this market?

Perhaps, but
given the market activity of last week, it’s looking less likely.

So, what should
you do?

Make sure you’re
protected, at least on some of your investments.  Especially those that you might need for
retirement.  Given market action last
week, we think there is a strong possibility that this correction will continue
long term although we do expect markets could rally some first.  We would view any rally at this point as a
bear trap.

For that reason,
you may also want to think long and hard about taking the traditional broker
and advisor advice about staying in the stock market for the long haul,
‘keeping your eyes on the horizon’.  At
some point here in the relatively near future, we are of the mind it will fail
many investors miserably and cost them their dream of a comfortable,
stress-free retirement.

This
week’s Retirement Lifestyle Advocates Radio Program is now posted at www.RetirementLifestyleAdvocates.com.  It is a ‘best of’ show featuring Gerald
Celente from two weeks ago.  On the
program, host, Dennis Tubbergen and Mr. Celente discuss the strong possibility
of a stock market correction which began just a week after the show originally
aired.

“Stock prices have reached what looks like a
permanently high plateau. I do not feel there will be soon if ever a 50 or 60
point break from present levels, such as (bears) have predicted. I expect to
see the stock market a good deal higher within a few months.”

“Stocks
look  pretty cheap to me”