As bad as markets were the
week before last, they were even worse last week.

While the Coronavirus has been the pin that has popped the bubble, we have been forecasting a big decline in stocks for a couple of years.  Admittedly, at times over the past couple of years, our calls for a major stock market decline in the near future were reminiscent of the boy who cried wolf.  But, going back several years, we put out the forecast of the Dow to Gold ratio reaching at least 2, but more likely 1.

Given
where stocks are today, that forecast still sounds more like fantasy than
reality, but when looking at the facts, we are holding firm to that forecast.

For
the uninitiated or new reader, the Dow to Gold ratio is the value of the Dow
Jones Industrial Average divided by the price of gold per ounce in US
Dollars.  As the databox above shows, the
Dow to Gold ratio currently stands just under 13.  That means we are of the strong belief that
there will be more downside for stocks (probably much more) and more upside for
gold.  It’s important to note that it’s
quite possible we could see a bear market rally before the downtrend continues
but, from a technical perspective, this still looks like a classic Elliot Wave
3 move.  If you’re not familiar with
Elliot Wave analysis, it’s a method to interpret market movements.  A wave 3 down (or up in a bull market) is a
strong and often long move.

As the country plummeted into depression in 1929, economic
contraction was huge.  The Federal
Reserve induced bubble known historically as the “Roaring Twenties” burst in
1929 as the economy contracted severely.

A
CNBC article (Source:  https://www.cnbc.com/2020/03/20/goldman-sees-an-unprecedented-stop-of-economic-activity-with-2nd-quarter-gdp-contracting-by-24percent.html) reports that Goldman Sachs
is forecasting an economic decline of 6% in the first quarter of this year and
24% in the second quarter of the year.
Should that occur, it will be the biggest quarterly decline in US
history including during the Great Depression and the Civil War.  These are historic times in which we live.

The
government is promising stimulus.  Over
the past week, stimulus plans have been floated from $850 billion at the
beginning of last week to about $2 trillion over this past weekend as we are
writing this week’s issue of “Portfolio Watch”.

Meanwhile, there also appears to trouble brewing in the banking sector as we have also been discussing over the past couple of years.  The Federal Reserve has been supporting or propping up the repo market which is the overnight lending market between banks since September.  The Fed announced on Friday they would make up to $1 trillion per day available to big banks through the end of the month.  (Source:  https://www.pbs.org/newshour/economy/federal-reserve-to-lend-additional-1-trillion-a-day-to-large-banks)

Read
those last two paragraphs again.  We are
talking trillions and trillions of dollars in an attempt to reinflate the
bubble.

Here’s
our forecast – it won’t work.  As we have
often stated, you can’t solve a debt problem by creating more debt.

The reality is, when looking at the fiscal condition of the government in 1929, the government wasn’t broke.  Government debt was about 20% of economic output or Gross Domestic Product.  Today, government debt is well over 100% of GDP, and that’s before the massive economic contraction hits this quarter and next.  This could likely be far worse than in 1929.

For readers who think that the stock market will come roaring back once the coronavirus situation gets under control – you may want to think again.  Despite this massive and painful sell-off, stocks are still extremely overvalued. 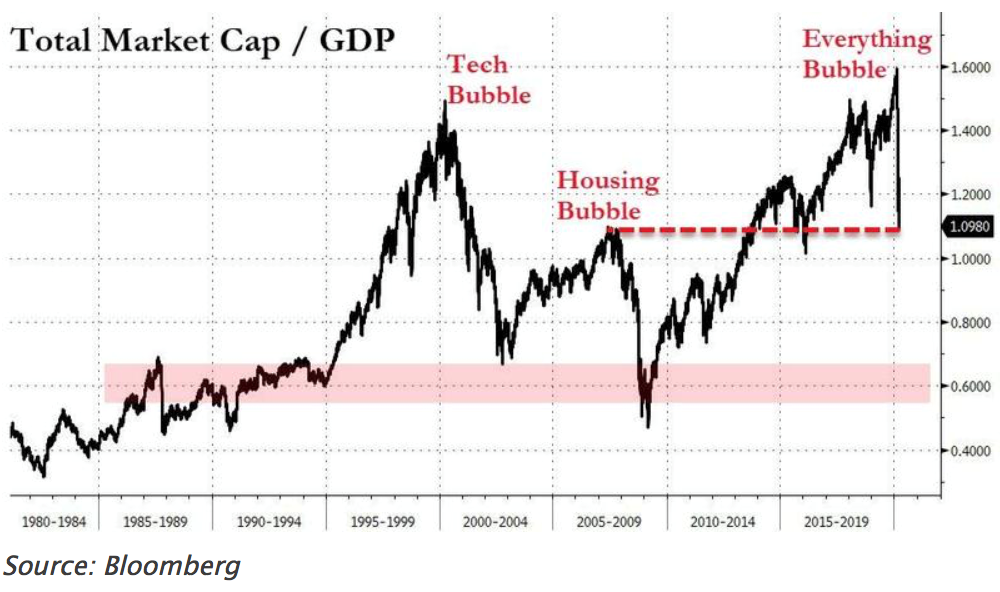 This
chart, from Bloomberg, shows total market capitalization compared to Gross
Domestic Product.  The important thing to
note from the chart is that stock valuations, after the recent huge decline, are
back to where the decline started prior to the financial crisis of 2007 and
2008.

In
other words, the recent decline has now gotten us back to valuations were when
the financial crisis began.
That’s stunning.  And, it also
makes the case for our Dow to Gold forecast stated above.

Doing
some rough math, if GDP contracts by 30% from here and the economy recovers in
the 3rd quarter (which is pure speculation at this point), the
economic decline stands to be three times worse than in 2008.  GDP will fall from about $21 trillion to
under $14 trillion.

In
2008, stocks fell more than 50% from these current levels when using the market
capitalization to GDP ratio.  It’s
reasonable to hypothesize that a bigger decline from these levels is likely
given that the economic decline will be three times worse.

With
the Dow at about 19,000, a 50% decline from here puts it at 9,500.  An 80% decline which in our view is more
likely given the projected economic contraction puts the Dow at about
4,000.  That would be in the neighborhood
of our longstanding Dow to Gold ratio forecast of 2 at a minimum.

It is our strong conviction that this is not a ‘buy the dip’ correction.  There will be more downside and we believe that forecasts for a rebounding market and economy at year-end are far too optimistic.

If
you are using the two-bucket approach to manage your assets as many of our
readers are, the assets in your deflation bucket have remained constant and
stable.  You have experienced no
losses.  That’s good and will keep many
retirement plans on track.

If you are not using the two-bucket approach but would like to discover how to potentially implement it in your situation, feel free to give the office a call.  We would be glad to schedule a phone consultation to give you details.  The office phone number is 1-866-921-3613.  Rest assured, the phone consultation will be informational only, and we’ll get you some educational handouts prior to the call.  If you have dreams of retiring and you’re concerned about your retirement nest egg, get educated.  And, as we’ve outlined here, time is of the essence.

But
there’s another piece of this puzzle that we should discuss.

Inflation.  All this new government spending cannot be
funded by tax revenues.  In a period of
economic contraction, tax revenues decline.
Prior to the current crisis, the US was already running $1 trillion
deficits as far as the eye could see.
Now, in light of the current situation, government operating deficits
could be triple that number.

While
there are strong deflationary forces presently, we believe these forces will be
overtaken at some point by inflationary, even hyperinflationary forces.  That’s why having assets in the second bucket
is essential.  To preserve purchasing
power.

While it is hard to imagine inflation given the massive decline in the value of many financial assets presently, the current policy response can likely lead to no other outcome at some future point.

Exactly
when this inflation will appear is tough to predict, but there is a tipping
point that we will have to reach given the massive new money creation by the
Fed.

As we
wrote in last week’s “Portfolio Watch”, “after the financial crisis, the Fed
engaged in quantitative easing to the tune of $85 billion per month, or about
$1 trillion per year.  Last week, in one
day, QE totaled $1.5 trillion.”

Get educated.  We are in the process of developing
additional educational materials to keep you informed as these anticipated
events occur.  Look for more information
by next week.

In
these times, if you know of someone that might benefit from the information in
this weekly publication, direct them to get a free subscription at www.RetirementLifestyleAdvocates.com.

As
you all know, we respect the privacy of our subscribers and never inundate them
with e-mails.

Blessings
to all of you.

“No act of kindness, no matter how small, is ever wasted.”