While it may seem that stocks and other markets are ‘getting back to normal’, it remains our view that this is the calm before the storm.  In other words, we view the current rally as a countertrend, bear market rally that will die out at some point before the next wave down begins.

The only way stocks don’t decline moving ahead in our view is if the Fed expands its massive money creation scheme to buy stocks in addition to junk bonds and corporate bonds (via the US Treasury).

As we have been discussing, while the focus of Americans has been on the coronavirus situation, Fed policy has begun the nationalization of the private sector – a very dangerous development in our view.

Meanwhile, another ‘money for the masses’ proposal is being floated in Washington.  Senators Kamala Harris, Bernie Sanders, and Ed Markey have proposed a bill that would pay each American $2,000 monthly.  The $2,000 monthly payments would be made to each adult family member as well as to each child in the family up to a maximum
of three children.  That means a family of 5 would receive $10,000 monthly.  The bill would also block debt collectors from seizing the payments to pay back bills. (Source:  https://abc7.com/coronavirus-update-stimulus-payments-covid19/6164181/)

You can’t make this stuff up.

Of course, there is an elephant in the room.

From where will the money come to pay for such a utopian fantasy?

The same place it’s been coming from – the money creation machine that we’ve come to know as the Federal Reserve.

Here’s the harsh reality.  When you double the money in circulation, you halve its purchasing power.  When you continue to print money with a blatant disregard for economic reality, you eventually destroy the currency and the savings and investments of those that put their faith in the currency.

History teaches us this over and over again.  That history has evidently not been taught to those eagerly awaiting the next round of free money from the government.  But, if you have saved some money, perhaps in a 401(k) or IRA, or maybe you’ve inherited some money from a hard-working parent who’s passed on, you need to know this history and plan accordingly.

That’s why we have advocated a two-bucket approach to managing assets; one bucket to hedge against a deflationary collapse in the price of assets and another bucket to hedge against future and ever-increasing money creation.  You need to have both outcomes covered or you risk financial devastation.  Should the money printing stop at some future point, we will see deflation.  Should it continue, history teaches us what the outcome will have to eventually be.

There are many examples of money printing destroying a currency.  One needs to look only at the recent examples of Zimbabwe and Venezuela to see the results of socialistic free money for all.  Currencies are destroyed along with the hopes and dreams of savers.

This is not a new phenomenon or some economic theory.

Rather, it’s a statement of economic fact.  One cannot study history and find an instance of any society or government printing their way to prosperity whether the “printing” occurred via a devaluation of precious metal coins or through the use of a digital printing press which is today’s preferred method.

No matter your political leanings, if you have assets, this is a lesson you don’t want to learn the hard way.

In the interest of brevity, we’ll give you a few examples.  We should also point out that the inspiration for these examples came from an excellent piece written by Alasdair McLeod (Source: https://www.goldmoney.com/research/goldmoney-insights/time-to-learn-about-money).

In the early 1700’s, the central banker of France, Mr. John Law destroyed the financial system through excessive money creation.

Appointed to his position by the regent who was ruling France for Louis the 15th who was seven-years-old at the time, Mr. Law began to issue paper money that could be exchanged for the precious metal coins that were used as currency at the time.

It didn’t take long for the coins to be almost completely removed from circulation since the paper money was much easier to use than the coins.  Due to the massive amount of debt France had after the death of Louis the 14th, Law began to print more paper money than he had precious metals to back.

Eventually, France made holding the coins made from precious metals illegal since Law had printed far more paper money than there were precious metal coins to back it.

The printing of paper money continued, and it seemed, for a time, that prosperity was everywhere.  Stocks soared.  Shares in the now infamous Mississippi Company rose more than 1000% in one year.  Real estate prices soared.  Luxury items were flying off the shelves in Paris.

The most widely discussed currency failure was that of the German Mark after World War One.

Germany assumed that it would quickly win the war which justified the ‘temporary’ use of the printing press.  As we all now know, Germany was overly optimistic regarding the war’s outcome.  The country lost the war and then was saddled with huge reparations responsibilities.

Historians have largely agreed that one of the contributing factors in Germany’s loss was many of the country’s troops abandoning the military due to soldier’s wages not keeping pace with rapidly escalating consumer prices caused by massive money creation.

After the war, given the size of the payments being required of Germany, the country just continued to print money.  The inflation problem worsened.

When World War One began, the German Mark could be exchanged for the US Dollar at a rate of 4.2 Marks per Dollar.  By the time the end of 1923 rolled around, the exchange rate was 4,200,000,000,000 Marks per US Dollar.  That’s a devaluation factor of one trillion.

The current currency devaluation began with the adoption of Keynesian economic policies.  John Maynard Keynes, a British economist, theorized in his 1936 book “The General Theory of Employment, Interest, and Money” that the government and central banks could play an active role in stabilizing economies by creating demand.

After World War Two, as we noted in last week’s “Portfolio Watch”, Keynes lobbied for a central world currency to be called the ‘bancor’.  That plan was rejected by the United States.  Instead, the US Dollar was anointed as the world’s reserve currency as it was convertible to gold at a rate of $35 per ounce.

Of course, that all changed in 1971 when the redemptions of US Dollars for gold were temporarily suspended.  Since that time, the US Dollar has been a fiat currency.  History teaches us something else – fiat currencies always fail.  So, we’re not debating the ‘what’, we are only debating the ‘when’. 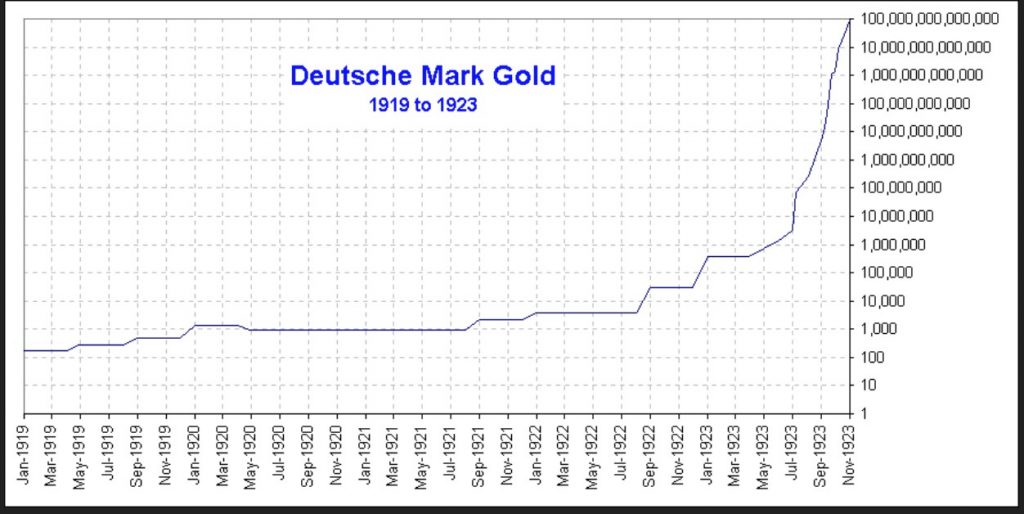 The chart illustrates the German Mark priced in gold.  One should note that the increase did not become parabolic until the last two months of the hyperinflation.  Hyperinflations, once they begin, don’t last long. 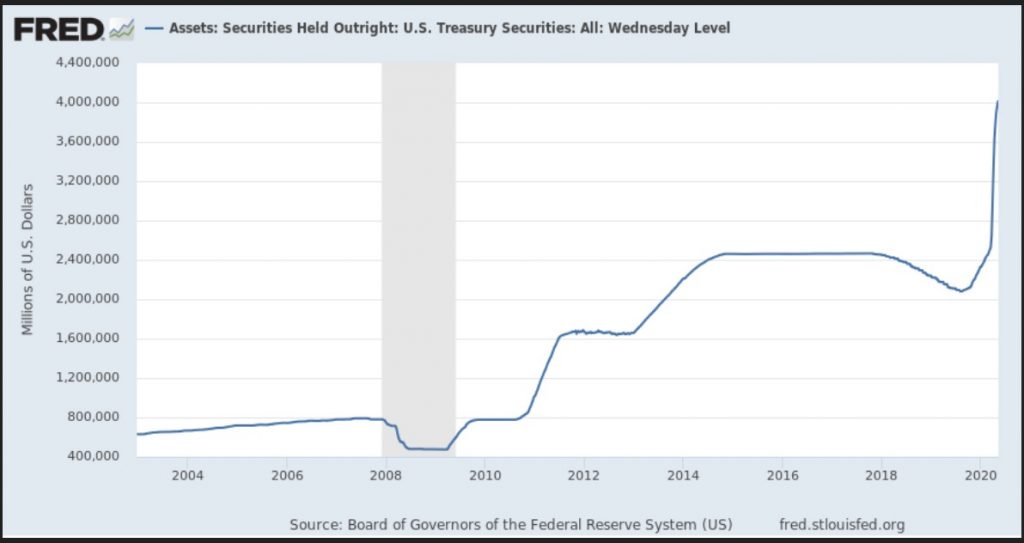 Compare the chart of gold priced in the German Mark to this chart of the Federal Reserve’s balance sheet which measures money printing.  (Source:  St. Louis Federal Reserve)

The point is this.

As great as $10,000 per month sounds for a family of five or $4,000 per month for a couple, it will only accelerate currency devaluation.

To be fair, the act faces an uphill battle and, at this point, seems unlikely to pass.  But, as John Mauldin noted in his newsletter this week, referencing a piece (Source:  https://www.collaborativefund.com/blog/five-lessons-from-history/) written by Morgan Housel, when people are suffering from sudden, unexpected hardship, they are likely to
adopt views that they would have previously thought unthinkable.

Where we go from here financially speaking is dependent on the ongoing monetary policy in our view.  Since no one knows the answer to that question, it’s best to be prepared for both possible outcomes.

We urge you to continue to educate yourself.

If you are a client of our company, you are getting an invite to a private, client-only webinar update.

We are conducting periodic public educational webinars as well.  These webinars contain information that our clients already have.  It is designed to educate and inform about maximizing Social Security benefits and the two-bucket approach to money management in today’s environment.   If you are not a client or our company but would like to learn more about current circumstances and strategies that you might employ to not only survive financially but possibly prosper, you may call the office to register at 1-866-921-3613.

This week’s RLA radio show features an interview with author and commentator, Karl Denninger.  We discuss the long-term economic impact of current events.  The program is now posted at www.RetirementLifestyleAdvocates.com.

“Always forgive your enemies; nothing annoys them so much.”