Last week, here in “Portfolio Watch”, we noted that despite the fact that stocks were rallying and it seemed that stocks were getting back to more normal behavior, we thought that the rally in stocks was a bear market rally and our view was more downside for equities moving ahead.

That remains our view.  Last week, stocks fell more than 2%.  Technically speaking, the price behavior of stocks is playing out according to one of our most likely scenarios.  The rally in stocks stopped at the 50-week moving average of the price which is an important technical indicator.  That may mean the bear market rally in stocks is coming to an end.

Meanwhile, in Washington, policies are being proposed that would require even more money printing; massive, historical levels of money printing.

The HEROES Act, a $3 trillion stimulus package passed the house with 14 Democrats voting against it and 1 Republican voting for it.  Seems that this bill has little if any chance of moving further.  Should it make it through the Senate, the President has already stated he would veto the bill.

The bill, in its current form, would temporarily eliminate the caps on state and local income tax deductions on federal taxes and give a whopping $1 trillion to state and local governments to deal with budget shortfalls.  Also included in the bill would be up to $10,000 college debt forgiveness and a bailout for the postal service.

Our point is this – there is no money to pay for such a bill.  Should this bill be enacted in addition to the $2.2 trillion CARES Act just recently passed, more than $5 trillion in new spending would have to be funded through more money creation.

These policies are an outright attack on savers and investors as money creation at these levels will ultimately erode the purchasing power of the US Dollar.

As we have often stated, history teaches us that ‘temporary’ money printing is never temporary and it almost always accelerates as a financial system falls further down the slippery slope of currency devaluation.

Last week, the Treasury announced that it would need to sell $2.99 trillion in new government debt in the third quarter of this fiscal year to finance the programs already passed.  We should point out that is BEFORE any additional stimulus program is adopted. (Source:  https://www.zerohedge.com/markets/goldman-spots-huge-problem-fed). 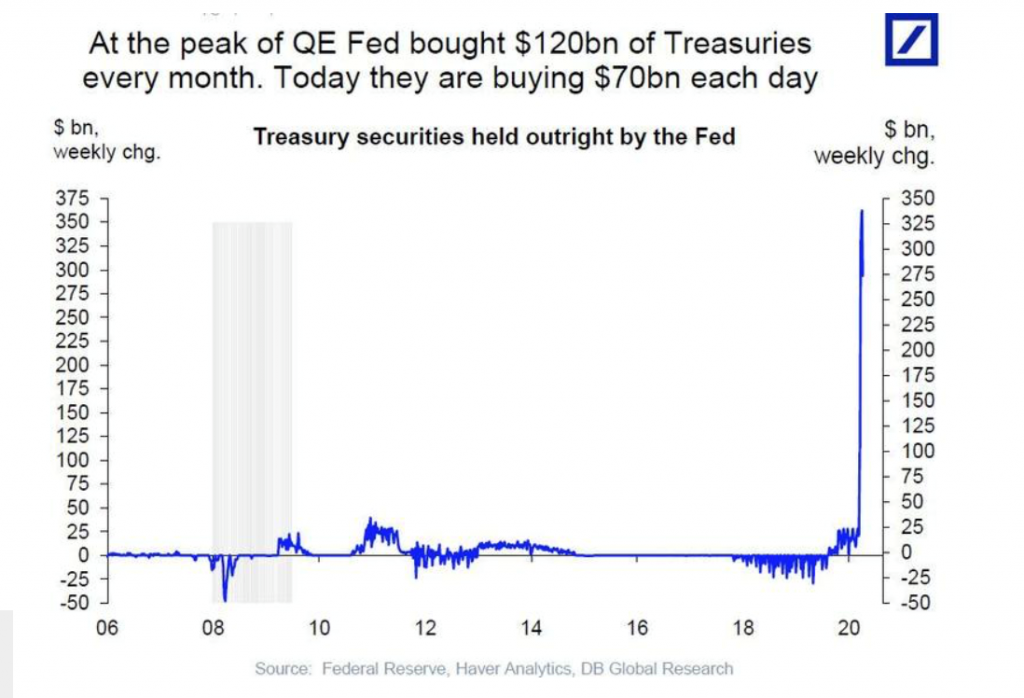 These new debt issues of nearly $3 trillion come after new debt of about $1.5 trillion were issued during the first two quarters of the fiscal year.  That means the national debt will increase at least $5 trillion if no additional stimulus is passed which is unlikely in our view given that this is an election year.

The Federal Reserve has been the only buyer of this debt, printing new currency to make the purchases.  This chart that illustrates US Government debt held by the Fed is both telling and disturbing.

In the month of April, the expenditures of the US Federal Government were about $1 trillion while tax revenues were $242 billion.

Tax receipts were down 54% year-to-year while government expenditures rose by 161%.  (Source:  https://www.zerohedge.com/markets/fiscal-disaster-us-april-deficit-hits-record-738bn-government-spends-1-trillion-one-month)

We have reached the point globally that nearly all debt is being monetized.  The entire world, for the most part, is now embracing banana republic monetary policies.

As we have perpetually stated, moving ahead there will be both strong inflationary forces at work due to excess money printing as well as strong deflationary forces due to debt excesses.  It’s imperative to be prepared for each possible outcome.

The Commerce Department reported on Friday that retail sales fell 16.4% in April versus March.  That marks the worst one-month drop since record-keeping for this statistic began in the early 1990’s.

One specific retail sector, clothing, fell 90% from the same month a year ago.

Factory output fell 13.7% in April according to the Federal Reserve.  That’s the biggest monthly decline since 1919.

Last Thursday, it was reported that one-quarter of the U.S. workforce filed for unemployment.

Those pundits calling this a recession are entirely too optimistic.  These are depression numbers.  We are also of the opinion that those analysts suggesting this recovery will be V-shaped are also overly expectant.

The economic constraints imposed in response to the coronavirus are continuing to take their toll on an economy that has been fueled by money printing since the last recession.  Long-time readers of our work know that at the time the Fed began the ‘temporary’ measure of printing money after the Great Recession, we suggested this policy would not be temporary and the amount of money created would escalate.

That’s exactly what has happened.

The program will initially buy Eligible IG and HY ETFs, "with the preponderance of purchases" being IG ETFs. The Fed will buy individual bonds through this facility once Eligible Issuers certify eligibility (with the Fed providing the investment manager a list of companies that have completed self-certification). However, these certification materials have not yet been released, and so it could be a matter of weeks before the program is expanded to individual bonds.

Alongside the announcement of an operational SMCCF, the Fed released documentation around the various agreements made with vendors for this facility. Included in its Investment Management Agreement is a wealth of information of interest to spread market participants that was not previously made public. First, the investment strategy in broken down into three phases:

Stabilization Phase: The facility will begin with purchases of ETFs and be "focused on reducing the broad-based deterioration of liquidity seen in March 2020 to levels that correspond more closely to prevailing economic conditions." Purchases during this phase will occur at a higher pace than subsequent phases.

Ongoing Monitoring Phase: As market functioning improves to near levels consistent with economic conditions, "purchases will continue at a reduced, steady pace to maintain these conditions."

Reduction in Support Phase: The Facility will cease purchases by 9/30/2020 unless it is extended.

A few comments.  While this excerpt is a bit technical, it basically says the Fed will print money to buy corporate bonds.  We will boldly predict that purchases will not end by 9/30/2020 as the Fed is suggesting.  As noted above, temporary measures are rarely temporary.  We will also predict that at some future point, the Fed will begin to buy stocks.  The Bank of Japan has already been pursuing this policy.

The Bank of Japan has become a major shareholder in nearly 40% of listed companies as the central bank keeps buying stocks under its ultraloose monetary policy.

The BOJ has amassed an estimated 25 trillion yen ($227 billion) of equities as a result of purchasing exchange-traded funds. The tally is equal to nearly 4% of the roughly 652 trillion yen aggregate market value of stocks traded on the first section of the Tokyo Stock Exchange.

The bank's ETF purchases started in 2010 and have gained traction since BOJ Gov. Haruhiko Kuroda took office 2013 and pushed for aggressive monetary easing. Annual purchases have totaled 6 trillion yen since the summer of 2016.

The central bank's indirect holdings are assumed from the names of the ETF-purchasing trust banks listed in TSE data. Nikkei's estimate of the BOJ's effective ownership ratios showed that the bank was one of the top 10 shareholders in 1,446 listed companies out of 3,735 at the end of March.

A year earlier, the BOJ was a major owner of 833 companies, but that roster has expanded by 70% since.

In case you think that the Fed buying stocks would result in a bull market, that has not been the case in Japan.  Take a look at this chart of the Nikkei stock index.  A bull market is not guaranteed should the Fed also begin buying stocks.

We will continue to monitor these developments and keep you informed although as we noted last week when we wrote about John Law’s France in the 1700’s, the ultimate outcome here is predictable.  If you missed last week’s issue, you can go to www.dennistubbergenblog.com and read last week’s entry.

We are conducting periodic public educational webinars as well.  These webinars contain information that our clients already have.  It is designed to educate and inform about maximizing Social Security benefits and the two-bucket approach to money management in today’s environment.   If you are not a client or our company but would like to learn more about current circumstances and strategies that you might employ to not only survive financially but possibly prosper, you may call the office to register at 1-866-921-3613.

This week’s RLA radio show features an interview with a long-time Forbes columnist and money manager, Dr. A. Gary Shilling.  The program is now posted at www.RetirementLifestyleAdvocates.com.

“When we see ourselves in a situation which must be endured and gone through, it is best to make up our minds to it, meet it with firmness, and accommodate everything to it in the best way practicable. This lessens the evil; while fretting and fuming only serves to increase your own torments.”