The Federal Reserve is a little over a week into its program of buying private sector corporate bond ETFs with newly printed money.  Not surprisingly, corporate bonds rallied.

The most important analysis we can provide to our clients and friends in our opinion is the ongoing question of what the ultimate outcome will be as a result of extreme conditions in the financial markets.

Will there be severe deflation as a result of debt excesses?  Or, will there be inflation or even hyperinflation because of massive money printing?

Continuing to ask this question and looking for answers to this question supported by evidence and information from sources we trust will give us guidance as to how to manage investment assets moving ahead.

There is present evidence to support both outcomes.

The evidence to support the deflation outcome is pretty strong at the moment.

Bankruptcies continue at a historical pace.  Rental car giant, Hertz, filed for bankruptcy protection last week as the company looks to downsize its fleet of automobiles.  This is deflationary as the company is flooding the already saturated used car market with still more inventory.

According to “Market Watch” (Source:  https://www.marketwatch.com/story/why-this-might-not-be-the-best-time-to-get-a-good-deal-on-a-used-car-2020-05-05) used car prices fell more than 12% in April from the prior year.  That’s a huge decline and is deflationary.

Another deflationary symptom:  retail landlords are sending out thousands of default notices to their tenants who are unable to pay rent.  This from “Bloomberg” (Source:  https://www.bloomberg.com/news/articles/2020-05-22/default-notices-are-piling-up-for-retailers-unable-to-pay-rent):

Retail landlords are sending out thousands of default notices to tenants, a situation that could tip already ailing retailers into bankruptcy or total collapse.

Department stores, restaurants, apparel merchants, and specialty chains have been getting the notices as property owners who’ve gone unpaid for as long as three months lose patience, according to people with knowledge of the matter and court filings.

This is a very deflationary force.

Deflation, correctly defined, is a contraction of the money supply.  In today’s economy, money is loaned into existence.  That means that money is debt.  While it takes some thinking to get your head around that idea, once you come to grips with the fact that money is debt, it makes perfect sense that when debt levels get too high and defaults on debt occur, the outcome is deflation.

A symptom of deflation is delayed spending by consumers because prices drop.  This has a devastating economic impact on a consumer spending dependent economy like the economy of the United States as people put off spending in the hopes that future prices will decline, giving them a better deal on whatever it is they need or want to buy.

Inflation, on the other hand, is defined as an expansion of the money supply.  One of the symptoms of inflation is rising consumer prices.  As the Federal Reserve creates money out of thin air there is potential for inflation if enough money is created.

The Fed is creating money at a rate never before seen - that’s undoubtedly inflationary.

Whether we have deflation or inflation would determine how one manages the invested assets in an IRA, 401(k) or other investment accounts.  Because where we go will depend largely on Federal Reserve policy, we have long recommended a two-bucket approach to managing your money – one bucket of assets managed to perform well in a deflationary environment and another bucket of assets that are managed to perform well in an inflationary environment.

In our view, the most likely outcome at this point would be deflation followed at some future point by inflation or even hyperinflation if the Fed continues on its current course of action.

Short-term, we believe it will be difficult to avoid deflation given Depression levels of unemployment and bankruptcies.  Consumer spending will slow, and defaults will grow.

Of course, one of the problems with that policy is that money creation doesn’t have immediate cause and effect.  The full effects of Fed policy may not be totally felt for months or even years.

Another obvious problem with that policy is that the Fed doesn’t know how much money printing is too much.  We have our doubts that they will guess correctly since their forecasting track record is utterly dismal.

As we have previously noted, the US Government will need to sell nearly $3 trillion in debt to fund spending in the third quarter of this fiscal year alone.  That’s hard to imagine.

To help, here are some photographs. 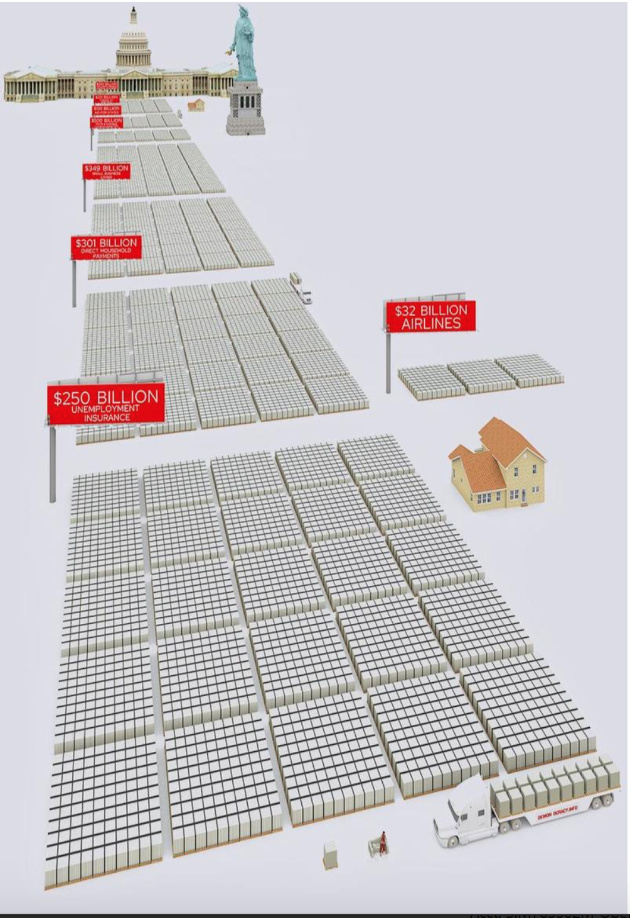 Keep in mind that the debt that needs to be financed in the third quarter alone needs to be 50% greater than the 20,000 pallets of $100 bills pictured in the last photo.

Each of these pallets contains $100 million dollars.

If the recently passed stimulus package was funded in $100 bills, 2000 semi-trucks loaded with $100 bills would be needed to transport the money.

To fund government spending in the third quarter, 3000 18-wheelers would be required.

As remarkable as it is alarming.

At some point, should money printing of this magnitude continue, the deflation will likely give way to hyperinflation.

The tipping point for inflation to appear in earnest is when the Fed has pumped so much money into the system that people begin to expect higher prices.  This is exactly the opposite of the price expectations for deflation.

When the inflation tipping point is reached and consumers expect higher prices, they begin to spend money faster to avoid paying higher prices for the items they desire.  It’s this spending pattern that causes inflation.

At this point, we are of the opinion that we will see short-term deflation followed by inflation unless the Fed changes course which also seems unlikely at this point and under the current leadership.

The two-bucket approach remains the best tactic to utilize in your portfolio from our perspective since the timing of the transition from deflation to inflation is very difficult to determine.

This week’s RLA radio show is a “best of” program featuring an interview with long-time Forbes columnist and money manager, Dr. A. Gary Shilling.  The program is posted at www.RetirementLifestyleAdvocates.com.

“Always go to other people’s funerals, otherwise they won’t come to yours.”