To a casual observer, the economic news is mixed.  Depending on the story one is reading, you would conclude that we are in a severe recession, even a depression, or, on the other hand, we are seeing a quick recovery from the economic fallout from the lockdown response to COVID-19.

Some analysts have reported that the new claims for unemployment benefits are declining which translates into better economic news.

While initial unemployment claims are indeed falling from their peak, “The Wall Street Journal” reported last week that new unemployment claims were 884,000 (Source: https://www.wsj.com/articles/weekly-jobless-claims-coronavirus-09-10-2020-11599685724).  This from the article:

Unemployment claims were unchanged at 884,000 last week, the Labor Department said Thursday. Claims fell steadily for weeks after hitting a peak of about 7 million in March, but the pace of descent has slowed and claims remain above the prepandemic record of 695,000.

While this level of jobless claim is an improvement, it is far from a healthy job market.

Another area where one finds conflicting stories is housing.  As we discussed in last week’s post, there is a massive movement away from less desirable large cities to more attractive suburbs and rural areas.

Digging into what is taking place in the housing market, you find two stories.

The first story has 32% of all Americans delinquent on their mortgage or rent at the beginning of August.  This from CNBC (emphasis added) (Source:  https://www.cnbc.com/2020/08/06/32-percent-of-americans-had-outstanding-housing-payments-at-beginning-of-august.html)

As Congress debates what to include in the next coronavirus relief package, almost one-third of households, 32%, owed money for missed rent or mortgage payments from previous months at the beginning of August, according to a survey by Apartment List, an online rental platform.

CoreLogic reported that the number of seriously delinquent mortgages (more than 90 days past due) doubled from May to June.

We have predicted that 20 percent of all outstanding mortgages could end up delinquent; these numbers point to that forecast being accurate.

The second narrative one discovers when looking at the housing market is that houses are selling like hotcakes due largely to the migration mentioned above and record low interest rates.  Cheryl Young, a senior economist at Zillow, had this to say on the subject, “Home sales are currently stronger than they were pre-pandemic and show no signs of slowing.  Demand is being fueled by low mortgage rates. We’re also seeing deferred home buying as the economy and housing market pressed pause in the spring.”  (Source: https://www.forbes.com/advisor/mortgages/fall-real-estate-market-mortgage-rates-break-records/)

The median price on single-family homes jumped for the 17th consecutive week with the latest year-over-year number increasing 10.8% from the same period last year.  As Ms. Young suggested, mortgage rates are at all-time lows.  Freddie Mac’s recent Primary Mortgage Market Survey found the average rate on a 30-year fixed mortgage was 2.86% and the average rate on a 15-year mortgage was 2.37%.

The housing market represents the extremes that now exist in the market.  This from “Zero Hedge” (Source:  https://www.zerohedge.com/economics/tale-two-housing-markets-mortgage-delinquencies-spike-450-yet-refis-boom-while-borrowers) (emphasis added):

As we noted last month, the US housing market is reflecting the extremes of the economy right now - between those who can't make ends meet due to the pandemic, and those who are either still employed, are sitting on a pile of equity, or both.

On one end of the spectrum, you've got affluent borrowers locking in record-low rates, while mortgage originations reached a record $1.1 trillion in the second quarter as rates on 30-year mortgages dipped below 3% for the first time in history in July, according to Bloomberg.

What's impressive is that the quarterly spike in new mortgage originations occurred while under nationwide public health measures that restricted home showings, appraisals, and in-person document signings, according to the report. That said, refi's accounted for around 70% of home loans issued during the period.

Also notable is that the average loan-to-value ratio is above 90%, as borrowers are having no trouble securing loans with just 10% or less down. 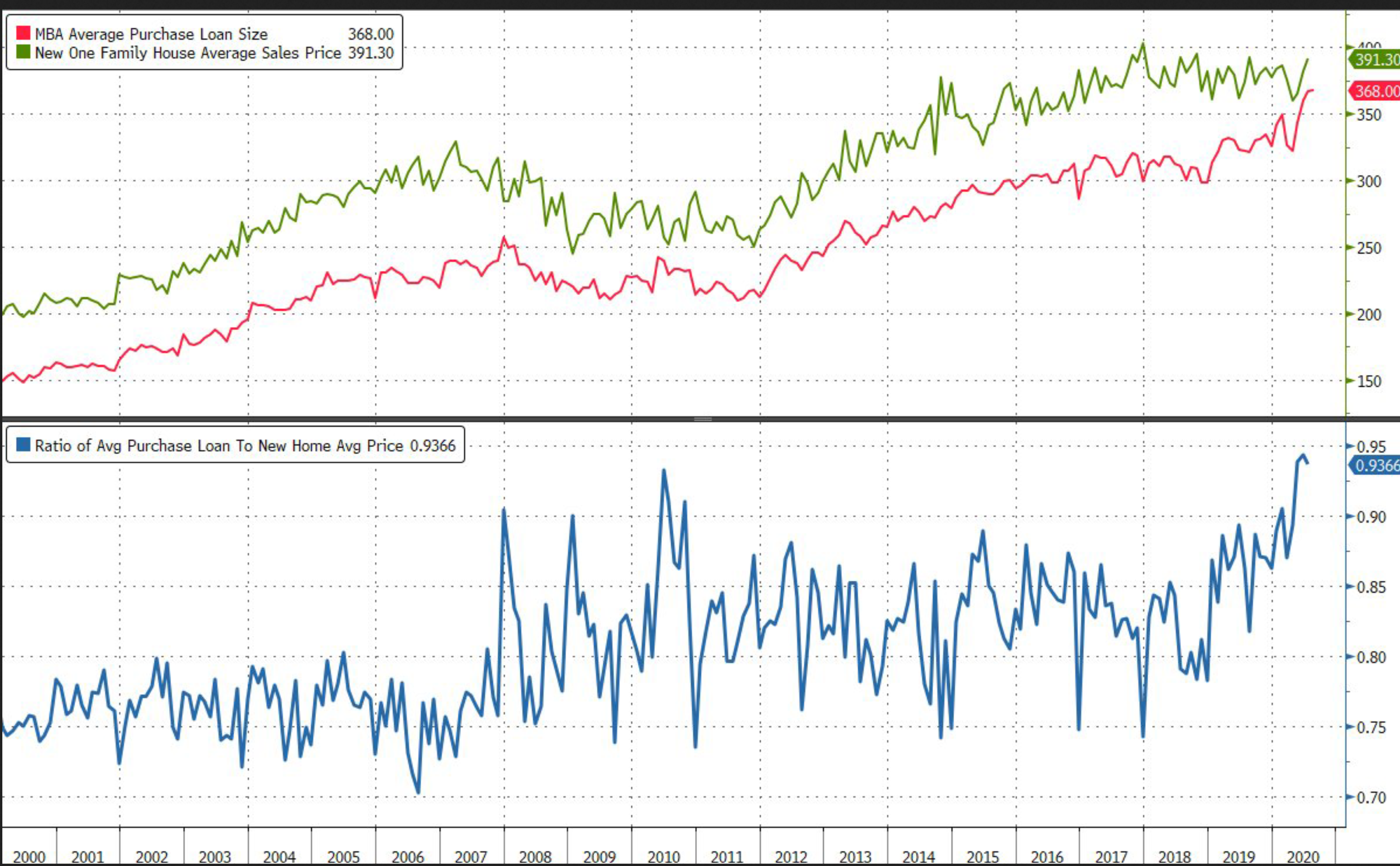 The blue line on the bottom of the chart represents the ratio of the loan amount to the home purchase price.  Notice that it is higher now than at any point in the last twenty years including prior to the subprime mortgage crisis.  Combine that statistic with a year-over-year price increase of nearly 11 percent and the stage is set for another housing market crash.

The “Zero Hedge” article also had this to say about the delinquencies that now exist among homeowners with a mortgage (emphasis added):

At the other end of the spectrum, mortgage delinquencies are up 450% from pre-pandemic levels, with around 2.25 million mortgages at least 90 days late in July - the most since the credit crisis, according to Black Knight, Inc.

"The money is in the homes and people with a college education are still working, but the pain is being felt where people are unemployed," said Wharton real estate professor, Susan Wachter, adding "Covid-19 will drive an increase in the already high income-inequality gap, and wealth inequality, actually, which is much more extreme."

A fact that many analysts may be missing is that many homeowners who are employed and who have equity in their homes may be refinancing to get access to cash.

Finally, on the whole topic of inflation and deflation, one gets two vastly different stories depending on which story you’re reading.

Breaking down the more specific price indexes, one finds deflation and inflation.

Interestingly the prescription drug index declined .2% while the index for new vehicles was unchanged.

Finally, the education index decreased .3% which was the first decline in the history of the index which dates back to 1993.  We look for this trend to continue as education costs, driven by easy credit, have bubbled and are now set to burst as many institutions of higher learning are attempting to charge ‘normal’ tuition rates for remote classes attended by students that are under lockdown.

Economic extremes will continue as the Fed continues to pursue easy money policies that will result in inflation where demand exists.  Deflation will occur where demand wanes.  Standards of living for many Americans will decline.

Once the lockdowns end, the Fed’s actions may lead to a short-term boom. However, the long-term effect will be even more debt, continued erosion of the average American’s standard of living, and the collapse of the fiat money system and the welfare-warfare state. The crisis will likely be brought on by a rejection of the dollar’s reserve currency status. This will be supported both by concerns about the stability of the US economy and resentment over America’s hyper-interventionist foreign policy.

This week’s radio program features an interview with Dr. Bob McHugh of www.technicalindicatorindex.com.  He is a noted technical analyst and we get his forecast for stocks and precious metals.  The interview is posted at www.RetirementLifestyleAdvocates.com.  If you haven’t yet visited the website to download the Your RLA app to give you access to the radio program, the weekly webinar updates, and this newsletter, you’ll want to do so.  Beginning in October, that will be the only method by which this newsletter is delivered.

“It is a miracle that curiosity survives formal education.”