The very extended markets became more extended last week.  The Dow advanced nearly 2% and the S&P 500 rallied 2.71%.  Gold, silver, and US Treasuries also rallied although the US Treasury rally was not significant.

It doesn’t take a degree in finance or economics to ascertain that whenever money is created, it will find a home.  In this case, much of the money that has been created has found a home in these markets.

As I discussed in last week’s “Portfolio Watch”, money creation cannot continue forever.  At some point, the sage warning offered by Thomas Jefferson will have to come to pass.  Jefferson stated if the American people ever allowed private bankers to control the issue of their currency, first by inflation then by deflation, the banks and corporations that would grow up around them would deprive the people of all property until their children wake up homeless on the very continent their fathers conquered.

Ignoring the warnings of Jefferson, the American people turned the currency issue over to the private bankers in 1913 when the Federal Reserve was formed.  At that point, the financial system began to be transformed from one based on gold to a fiat system.  Of course, the change didn’t happen suddenly or abruptly, instead, the change has been phased in over a long period of time.

From 1913 until 1933, gold circulated as currency.  Many of you reading this issue own the $20 gold pieces that circulated during this time frame.  A one-ounce gold coin was worth $20 as it had been for the prior 100 years. 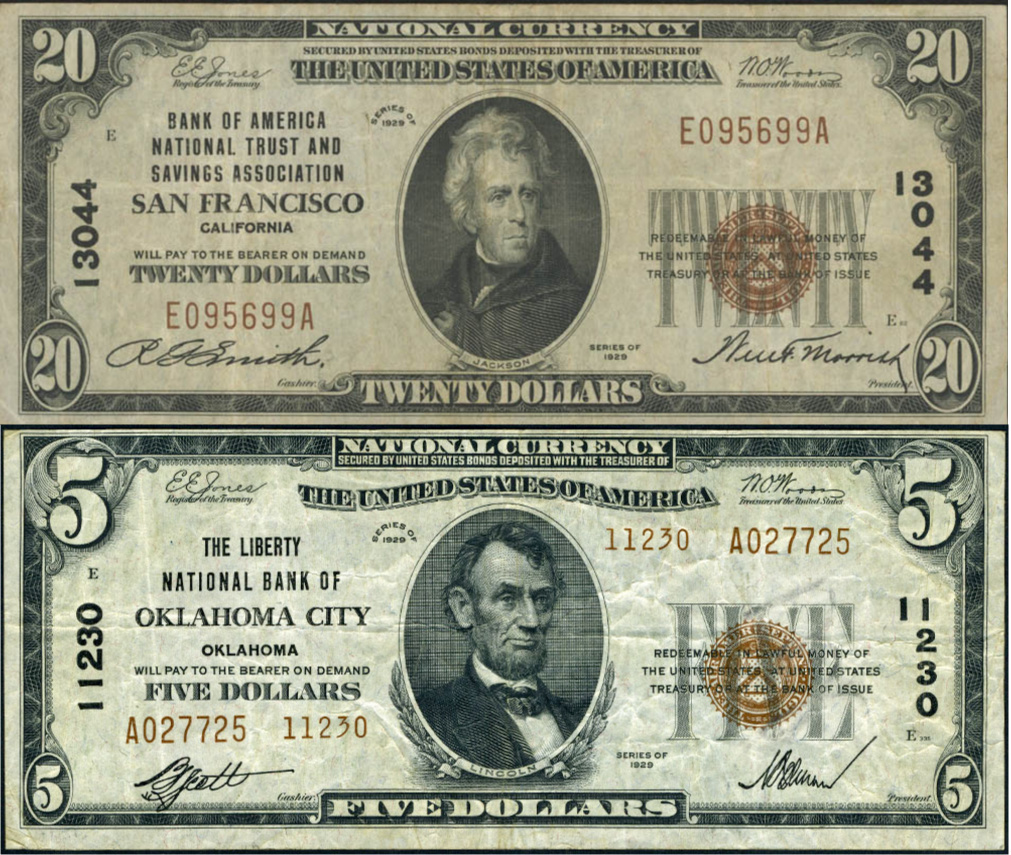 There are two examples of national banknotes on this page.  One issued by the Bank of American National Trust and Savings Association of San Francisco and the other issued by the Liberty National Bank of Oklahoma City.

A close look at both notes has one noting this language:

These certificates were redeemable for gold or lawful money.

In 1933, by executive order, Franklin Roosevelt made it illegal for American citizens to hold gold.  At that point, the US Dollar became a fiat currency.

After World War II, as part of a worldwide agreement, the US Dollar was made the reserve currency of the world.  The US Dollar would be redeemable for gold at a rate of $35 per ounce and the other currencies in the world would be pegged to the US Dollar.  It’s important to note that American citizens could still not legally own gold at this time.  The redemptions of US Dollars for gold were only available to foreign entities.

Then in 1971, the Bretton Woods agreement blew up when President Nixon eliminate the redemptions of US Dollars for gold.

Since that time, the US Dollar has been a pure fiat currency whose issue has been controlled by private central bankers.  It’s been a slippery slope.

Since 1971, loose money policies have created a series of boom and bust cycles with each cycle reaching greater extremes than the prior cycle.  These extremes are fueled by more radical monetary policies implemented by central bankers after each bust.

Many readers probably recently received a stimulus check.  This is nothing more than ‘helicopter money’ distributed directly to citizens from the printing press.

Prior to helicopter money, there was money creation with the newly created money going to banks.  This policy, called quantitative easing, continues to the tune of $120 billion per month.

Since the early 1980’s when interest rates began to fall, monetary policy has become ever more desperate and radical.

Now, it seems that these central bankers, purveyors of reckless monetary policies, are becoming more desperate.

This past week, many of the world’s central bankers continued their verbal assault on cryptocurrencies.  This from “Zero Hedge” (emphasis(Source:  https://www.zerohedge.com/crypto/its-not-money-desperate-ecb-downplays-cryptos-market-cap-soars-above-2-trillion)

How do you know that cryptocurrencies are disrupting the status quo and offering 'we, the global people' an alternative to establishment fiat control?

Simple - when the global central planning elites continue to jawbone how terrible, awful, dangerous (etc...) cryptocurrencies are and will be.

On the heels of US Fed's Powell "it's a speculative asset" comments, and US Treasury Secretary Janet Yellen's lies about "illicit finance" and "extreme inefficiency", and ECB President Christine Lagarde's warnings about crypto enabling "reprehensible behavior"; Isabel Schnabel, Member of the Executive Board of the ECB described Bitcoin as a speculative asset that doesn’t meet the definition of money.

As Decrypt reports, in an interview with Der Spiegel, which is also available at the ECB’s website, Schnabel said that “in our view, it is wrong to describe Bitcoin as a currency, because it does not fulfill the basic properties of money.”

She argued that Bitcoin is a “speculative asset without any recognizable fundamental value,” which is no stranger to wild price fluctuations.

When questioned whether the fact that a lot of people trust Bitcoin could harm fiat currencies like the Euro, Schnabel said she is more concerned that “trust in cryptocurrencies might rapidly evaporate.”

She argued that since Bitcoin “is a very fragile system,” this could result in disruption in financial markets.

And here is the kicker - put down sharp objects and remove any liquid from your mouth before reading on...

“The euro is backed by the ECB, which is highly trusted. And it is legal tender,” she said.

“Nobody can refuse to accept euro. Bitcoin is a different matter.”

That means you should be concerned as well.

And, quietly, gold and silver may be poised for more upside after consolidating since their August highs of last year.  This from CNBC (Source:  https://www.cnbc.com/2021/04/08/goid-markets-us-federal-reserve.html):

Gold prices climbed to their highest level in more than a month on Thursday as the dollar and U.S.
yields dropped and the Federal Reserve’s reiteration of its dovish policy stance also lifted bullion’s appeal.

“And the fact that we’re above $1,750, which is a key technical level, shows that gold has some legs to continue higher.” The dollar slipped to a more than two-week low, while benchmark Treasury yields eased, making gold more appealing compared to alternative investments like bonds.

The radio program this week features an interview with David Skarica publisher of the “Addicted to Profits” newsletter.

David and I chat about Fed policy and where the tipping point might be.  I get his forecast for stocks, US Treasuries, and metals.

David always has an interesting and valuable perspective and this interview is no different,

The interview is now available by clicking on the "Podcast" tab at the top of this page.

“The years don’t always add wisdom but they do add perspective.”