Markets were quiet last week for the most part.  The biggest mover in the markets I monitor was the US Dollar, which fell .79% in purchasing power against the fiat currencies of the major trading partners of the United States.

When looking at the economy and the markets, the current climate is just flat-out nonsensical.

As I have discussed previously, stocks are more overvalued than at any time in history using many different measures.  The “Buffet Indicator” as I have noted in the past, has stocks more extended than they have ever been historically. 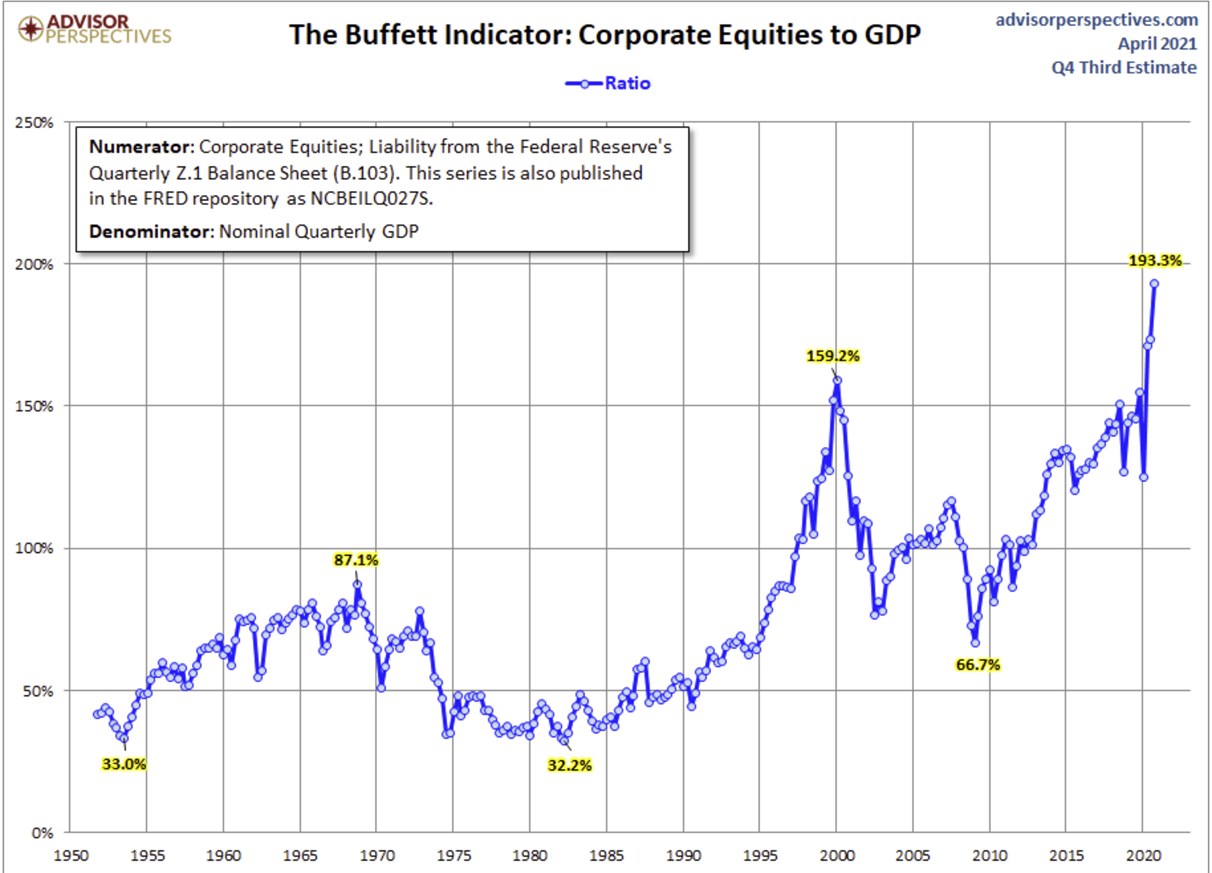 If you are a new reader, the Buffet Indicator uses total stock market capitalization compared to total economic output to determine the current value of stocks in relation to past valuations.

Notice from the chart originally published on April 8 by Advisor Perspectives that using the Buffet Indicator, stocks are now extended in price by more than 20% from the tech stock bubble peak at which point stocks were ridiculously overvalued and a severe price decline began.

“The Wall Street Journal” reports that the price-to-earnings ratio of the Standard and Poor’s 500 on a 12-month trailing basis now stands at 42.7.  That is up from 22.54 one year ago.  (Source: https://www.wsj.com/market-data/stocks/peyields).

Manipulating reported data doesn’t change reality, but perhaps it helps to change how people perceive reality.  And, as the old cliché’ goes, perception is reality. 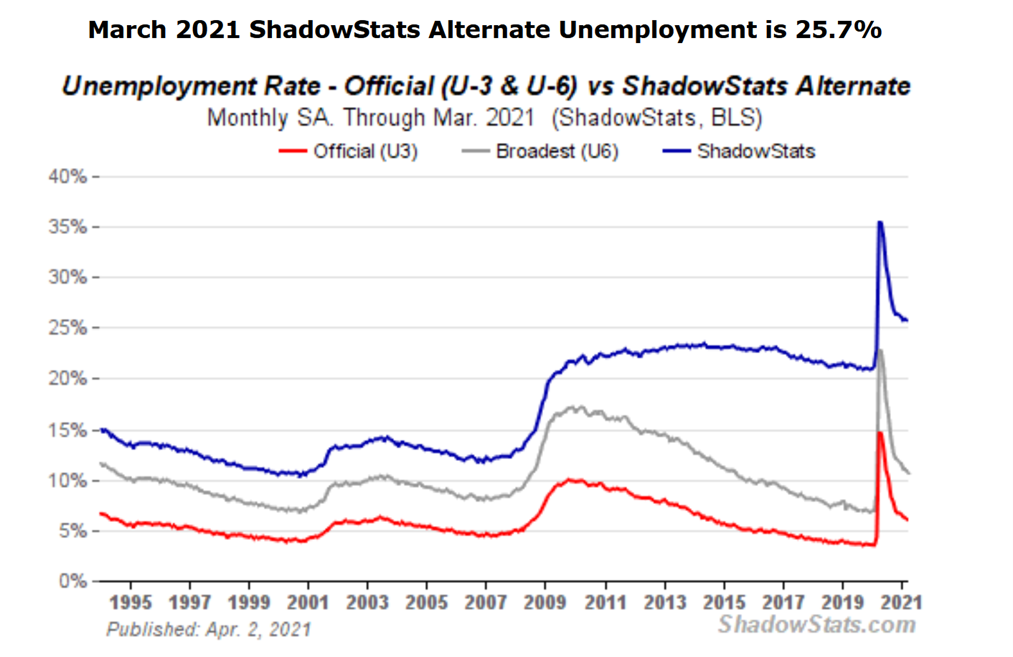 The chart, republished from www.ShadowStats.com., illustrates the three different unemployment rate calculations.  The red line is the official U-3 rate, the grey line is the U-6 rate, and the blue line is the pre-1994 rate.

Yet as noted above, stocks continue to make new highs as non-sensical as that seems.

While a complete discussion of available unemployment benefits in this format is impossible, suffice it to say that those who are unemployed can collect a lot more in benefits for a lot longer than in the past.  This from an article on the topic published by The Century Foundation (Source:  https://tcf.org/content/commentary/questions-answers-unemployment-provisions-america-rescue-plan-act/?agreed=1)

The American Rescue Plan extends the main programs for those who lost work during the pandemic through Labor Day (September 6, 2021) in the following ways:

PEUC and PUA benefits will be paid through the week ending September 6, 2021, and cut off after that point with no grace period.

The maximum duration of PEUC benefits has been increased from 24 to 53 weeks. PEUC benefits are paid to those who were initially eligible for state benefits but exhausted them before finding a job.

The maximum duration of PUA benefits was increased from 50 to 79 weeks. Those in high unemployment states could receive up to 86 weeks of benefits. PUA benefits are paid to those who are ineligible for state benefits, including the self-employed, but can demonstrate they lost their job for a specific COVID-related reason.

At a time when unemployment benefits are the most generous in history, it is not surprising that the unemployment rate is as high as it is.  There is little incentive for many workers to actively seek work.

I have had numerous conversations with small business owners looking to hire workers who have been unable to successfully do so.  In nearly every case, these business owners cited generous unemployment benefits as the reason.

While McDonald’s is admittedly an entry-level employer, some of the company’s franchisees have decided to pay people to interview for a job with no strings attached.  This from “Zero Hedge” (Source:  https://www.zerohedge.com/markets/whatever-it-takes-tampa-mcdonalds-exposes-americas-systemic-labor-shortage-forced-pay):

Something strange is happening in the US economy.

A McDonald's in Tampa, Florida, offers $50 to show up for a job interview. Even with free money plastered in big, bold black letters on its menu sign, facing a busy roadway, there are reportedly still no takers.

Business Insider spoke with Blake Casper, the franchisee who owns the fast-food restaurant in Tampa, who said the idea to hand out free money is an attempt to secure workers. He said he would do "whatever it takes to hire workers."

"At this point, if we can't keep our drive-thrus moving, then I'll pay $50 for an interview," said Casper, who owns 60 McDonald's restaurants across the Tampa-St. Petersburg Metropolitan Area.

Casper said McDonald's business is booming, but a labor shortage has made workers harder to find. His problems are merely a reflection of a much larger significant labor shortage developing across the country as trillions in Biden stimulus are now incentivizing potential workers not to seek employment but to sit back and chill and collect the next stimmy check for doing absolutely nothing in what is becoming the world's greatest "under the radar" experiment in Universal Basic Income.

At the moment, there are over 100 million Americans who are out of the labor force (of whom just 6.85MM want a job currently, and a record 94 million don't want a job)

These are just a couple of examples that continue to demonstrate that helicopter money creates an artificial, non-sensical environment.

Stocks at all-time highs despite no solid fundamental reason.  Potential workers deciding employment is a bad idea given the generosity of government benefits.  Totally artificial and non-sensical.

But also, temporary.  At some point, we will have to return to reality.

Current extended unemployment benefits are set to expire on Labor Day this year.  Rent moratoriums are set to end June 30.

If these deadlines are extended and more generous benefits are paid, these benefits will need to be funded by additional money creation.  That can’t go on forever without creating inflation that is even more significant than what we are already seeing presently.

Reality will re-emerge and when it does, so will the consequences.

The radio program this week is a ‘best of” program.  It is a replay of last week’s special edition program titled “Can you divorce yourself from the IRS in your IRA?”

We are also offering a copy of the updated book of the same title at http://divorcetheirsbook.com.

The program is now by clicking on the "Podcast" tab at the top of the page.

“Here’s something to think about:  How come you never see a headline like “Psychic Wins Lottery”?