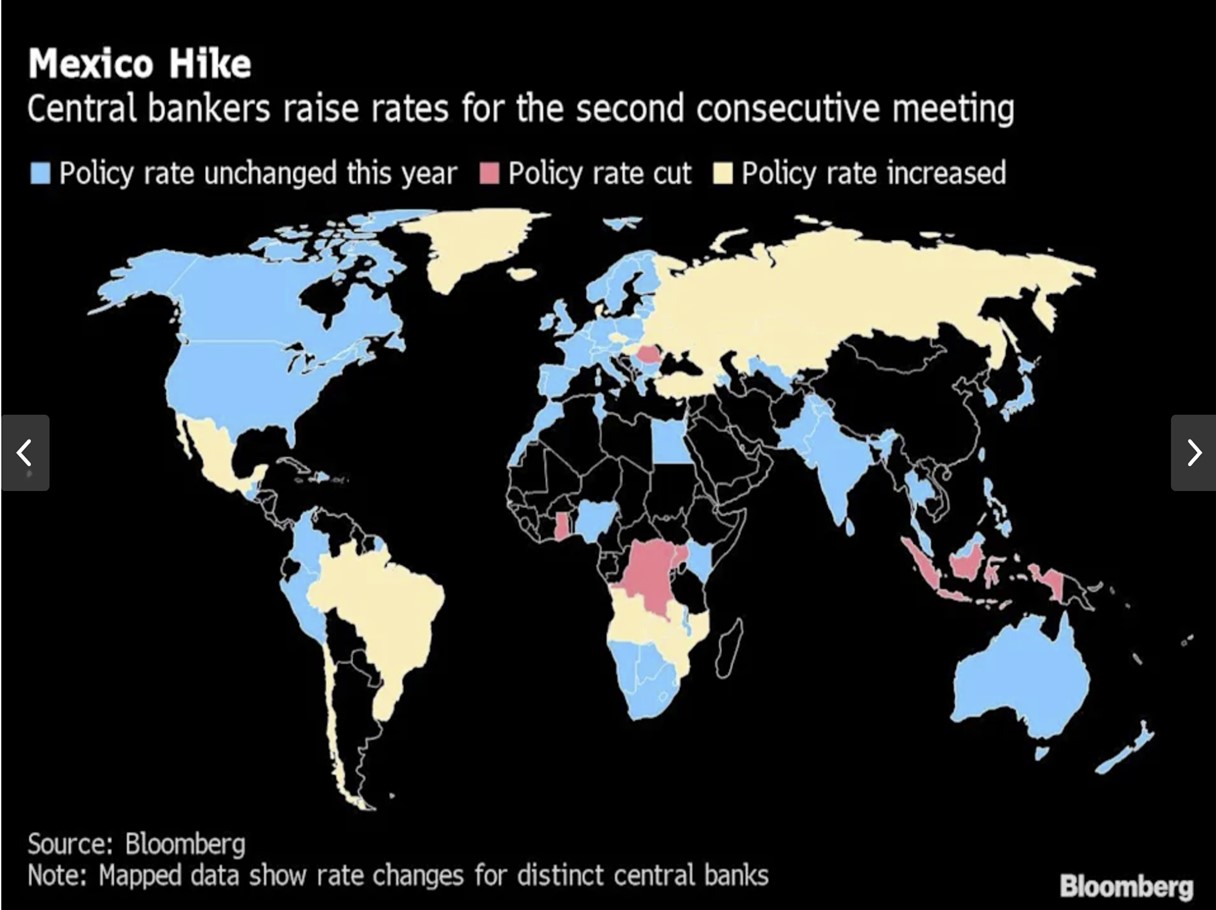 The Central Bank of Mexico recently increased interest rates for the second consecutive month.  This from “The Wall Street Journal” (Source:  https://www.wsj.com/articles/bank-of-mexico-raises-interest-rates-again-in-split-decision-11628795651):

The Bank of Mexico raised interest rates for a second consecutive meeting Thursday, citing persistent price pressures and supply shocks that it expects will keep inflation above its 3% target into early 2023.

The board of governors voted 3-2 to increase the overnight interest-rate target by a quarter of a percentage point to 4.5%, in line with market expectations. Deputy governors Galia Borja and Gerardo Esquivel voted to leave the rate at 4.25%.

The Mexican Central Bank’s actions mirror that of many other countries including Uraguay with a base interest rate of 5% and Russia.  This from “Market Watch” on July 23, 2021. (Source:  https://www.marketwatch.com/story/russian-central-bank-raises-key-interest-rate-again-as-inflation-surges-271627036812)

Russia's central bank on Friday raised its key interest rate in response to a stronger-than-expected pickup in inflation as the economy recovers from the effects of the Covid-19 pandemic and demand for energy rises.

In a statement, the Bank of Russia said it had lifted its key rate to 6.5% from 5.5%, having begun to tighten its policy in March, when its key rate stood at 4.25%. It said more rate rises are likely over the coming months.

There is talk of the US Central Bank, the Federal Reserve beginning to tighten as well for the same reasons.  I believe that this talk is just that – talk, unlikely to be followed by action any time soon.

I come to this conclusion for one main reason – current debt levels cannot be financed at higher interest rates.  In the recent past, I have presented the argument that current levels of inflation rival levels seen in the late 1970’s into the early 1980’s. 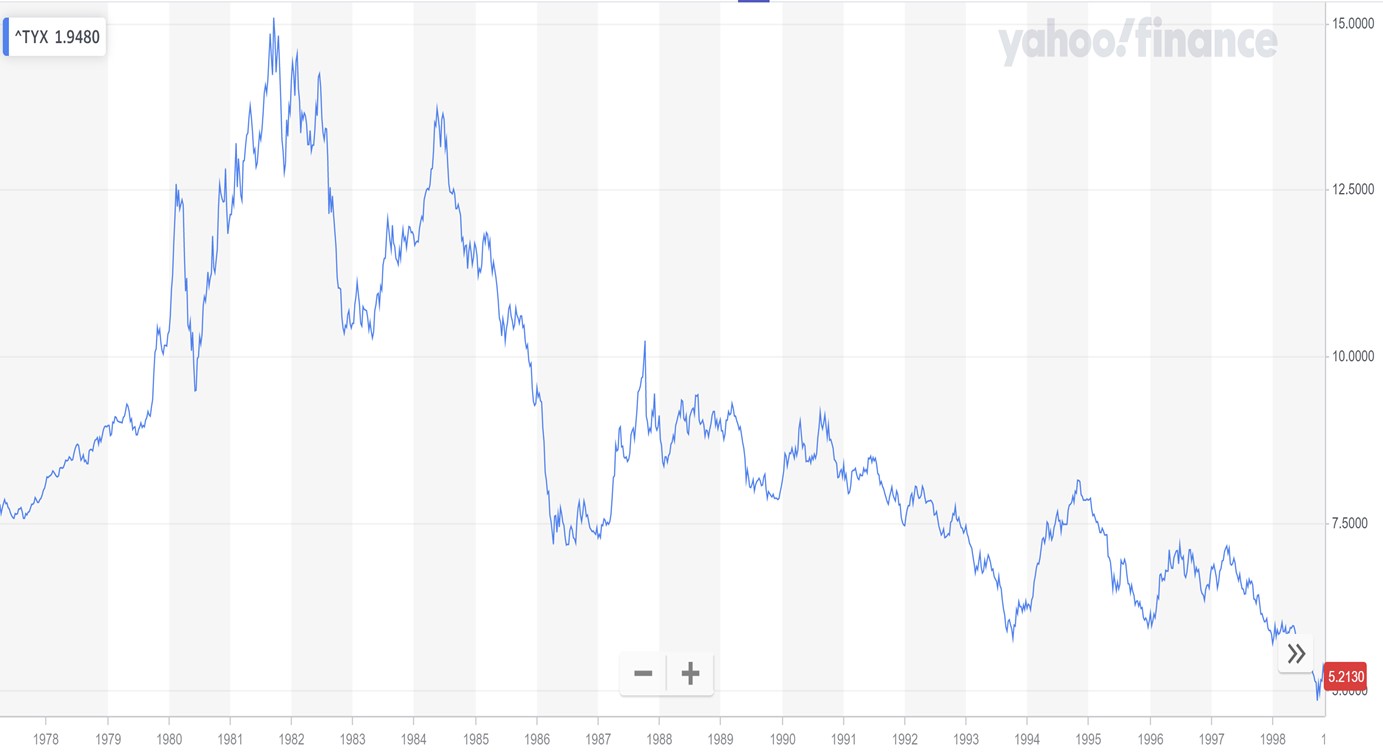 It was at that time that the Federal Reserve, responding to high levels of inflation raised interest rates.  Going into 1981, the Fed Funds rate was effectively 20%.  The 30-Year US Treasury Bond followed suit, increasing to about 15% as noted from the chart.

Going into 1981, the US had about $900 billion in debt.  If the entire debt had to be financed at 15%, that would have amounted to interest payments on the debt of $135 billion.

In the fiscal year 1981, US tax revenues totaled about $600 billion.  The national debt was about 150% of total tax revenues and interest payments on the debt would have consumed about 23% of tax revenues.

Should the Fed follow the lead of many other world central banks and hike rates to contain inflation, the Fed creates another problem – financing debt.

To subdue inflation the way the Fed did in 1980, interest rates might have to be raised to nearly 20% again.  Should that happen and should the 30-Year US Treasury yield rise to 15% again, the situation today would look far different than more than 40 years ago.

Presently, the official national debt is pushing $29 trillion.  Total federal tax revenues for the fiscal year 2021 are projected to be $3.86 trillion.  (Source:  https://www.thebalance.com/current-u-s-federal-government-tax-revenue-3305762)  Using the same assumption as above, should today’s Federal debt levels need to be financed at 15%, interest on the debt would amount to about $4.35 trillion, more than total tax revenues.

It’s for that reason that I conclude that the Fed may engage in ‘taper talk’, but it will be only talk.  There may be a symbolic increase in interest rates, but in my view, nothing meaningful enough to get inflation under control.

Treasury yields are rising amid optimism over the global recovery but there has been a run on Eurodollar options betting the Federal Reserve will opt not to raise interest rates at all.

Traders this week have been busy snapping up Eurodollar call options on underlying March 2025 futures that target three-month Libor to fix below 0.5%. These pay off if markets price the Fed keeping its benchmark at its lower bound until then. Futures markets are currently anticipating Libor will rise to about 1.47% by the first quarter of 2025.

This tail-risk hedge, a position aimed at protecting against extreme outcomes, has been bought repeatedly over the past week. Thursday’s session saw purchases of more than 110,000 of the options, according to traders in London and Chicago familiar with the transactions. The preliminary release of open interest data, which measures outstanding positions, has ballooned to more than 153,000 from about 22,000 a week ago.

A scenario where the Fed ends up holding rates near record lows through to 2025 would probably mean that the global economy fails to recover from the pandemic, resulting in central banks maintaining their ultra-easy policy.

Traders have already ponied up around $6.5 million on the Eurodollar hedge. While the underlying contract targets rates in March 2025, the option has a seven-month expiry, rolling off in March 2022, or what’s commonly known as a mid-curve option.

Given this likely outcome, you may want to consider using the recent dip in gold and silver prices to add to your precious metals holdings.

My new book “Retirement Roadmap” was released last week and achieved #1 best-seller status on Amazon as well as a ‘hot new release’ ranking.  Thank you for your support!

It is very much appreciated.

The book, as well as the Kindle version of the book, are both available from Amazon.

This week’s radio program is an interview with Karl Denninger with whom I discuss the infra-structure bill and some of the items hiding in the bill that may not be widely known.

If you are not yet aware, as you might expect, not much of this 2,700 plus page bill is actually related to infrastructure.

You’ll want to catch this conversation by listening to the podcast now posted by clicking on the "Podcast" tab above.

You can also listen to the weekly “Headline Roundup” webinar replay by clicking on the YPW Live Webinar Replay at the top right, under the Blog Categories label.

“A little government and a little luck are both necessary in life, but only a fool trusts either of them.”