For many years now, I have been commenting on how artificial the financial markets have become.  Conditions that would have never existed a few, short years ago now exist and are explained away by many pundits as the “new normal” as if the basic laws of economics and finance have somehow recently changed.

The basic laws of economics and finance have not changed.  At some future point, this will become evident with economic conditions emerging that are unpleasant at best.  We are already beginning to see evidence of changing economic conditions.

The most obvious evidence of changing economic conditions presently is inflation.  While there are respected analysts who agree with the Fed’s often stated narrative that inflation will not be a long-term problem, there are at least as many who think that inflation will continue to be a problem as long as easy money policies are pursued. 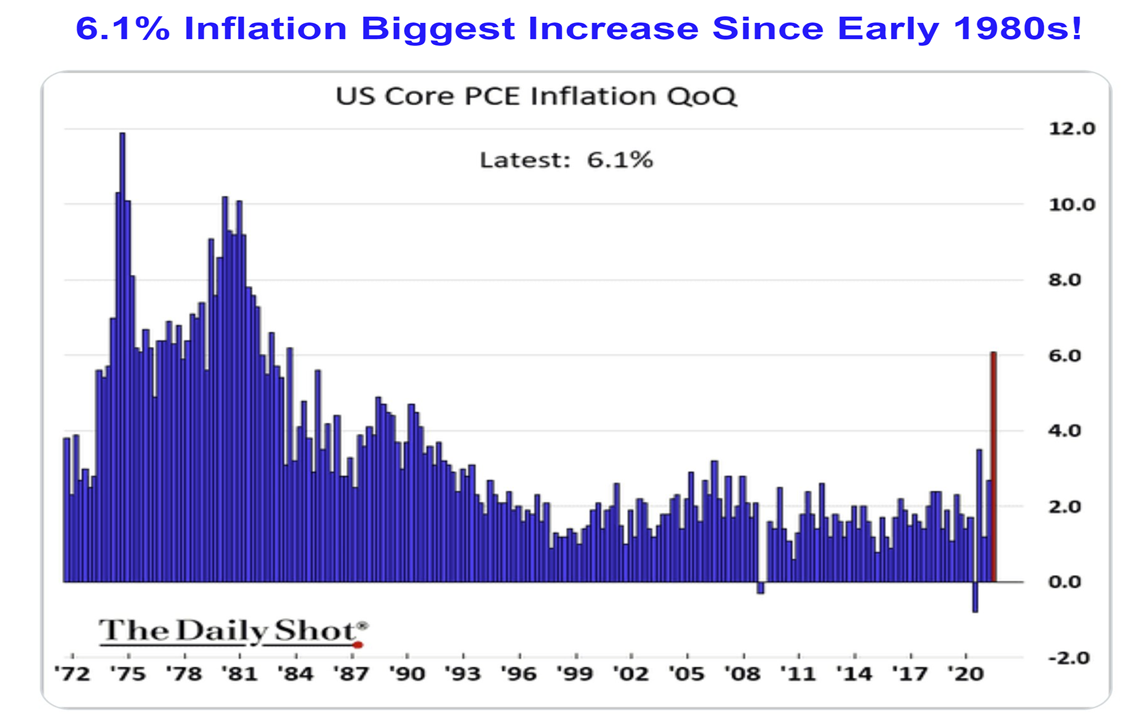 This chart illustrates the core inflation rate which has increased quarter-over-quarter by 6.1%, the most in about 40 years!

Note that since the currency creation began in earnest in 2020, inflation has been building.  I expect that this will continue as long as currency creation continues.  I guess that puts me in the category of those who believe that inflation will be a long-term problem unless policies change.

As I noted on last week’s “Headline Roundup” webinar, Albert Einstein once said that the ‘definition of insanity is doing the same thing over and over while expecting to get a different result’.

To continue currency creation expecting to get a different outcome than has been the outcome to date is the very definition of insanity in my view.

Bolstering my case is the recent behavior of many of the world’s central banks.  Many world central banks are creating currency and using that newly created currency to buy precious metals, gold in particular. 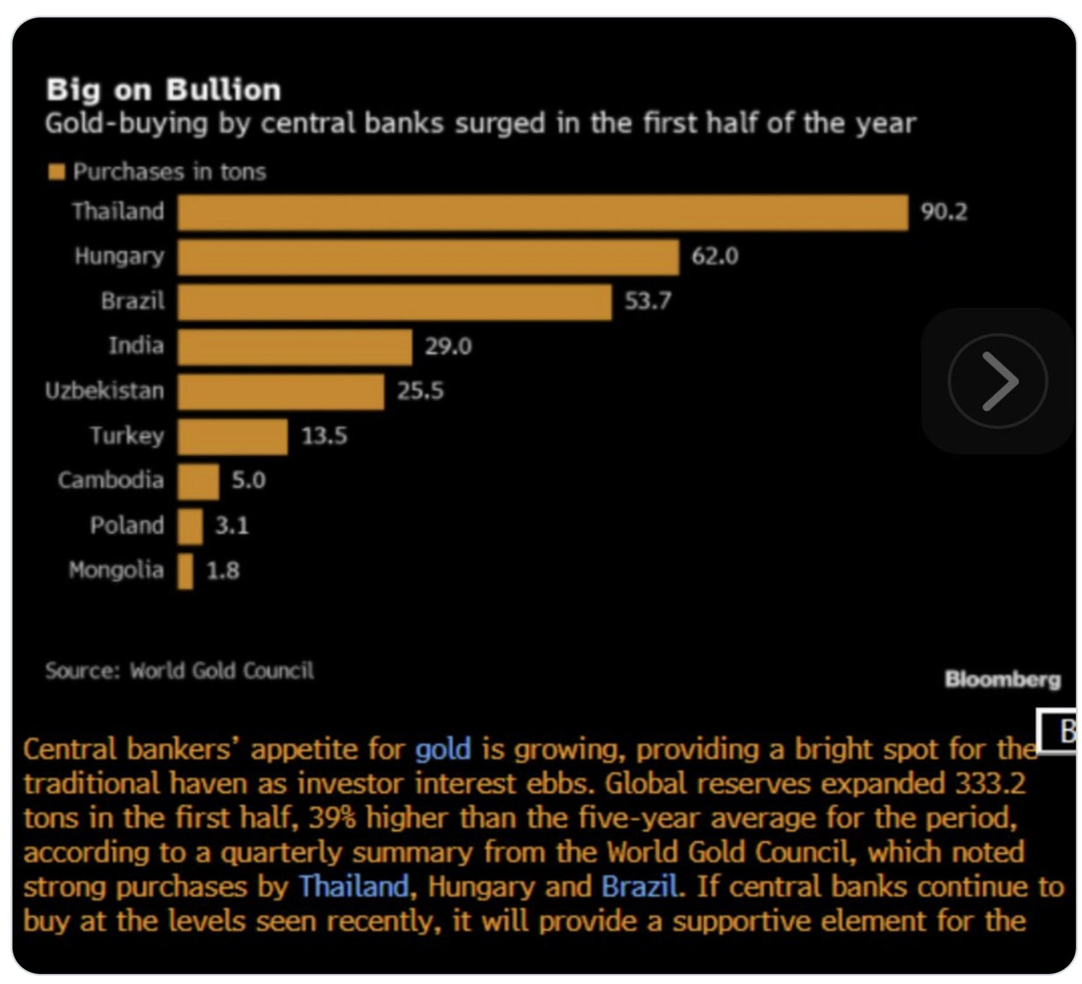 I have my doubts that these central bankers would be making these moves unless they were concerned about the prospects of continued, persistent inflation.

It is this currency creation that is largely responsible for the artificial state of the financial markets and the world economy.

Currency creation has been the policy of last resort for central bankers who used to be able to control the money supply by raising or lowering interest rates.

Since, in our fractionalized banking system, currency is loaned into existence, central bankers could create more currency by simply reducing interest rates and could get inflation under control by raising interest rates.

It’s important to note that raising interest rates as a policy response has not been used in earnest since the early 1980’s. 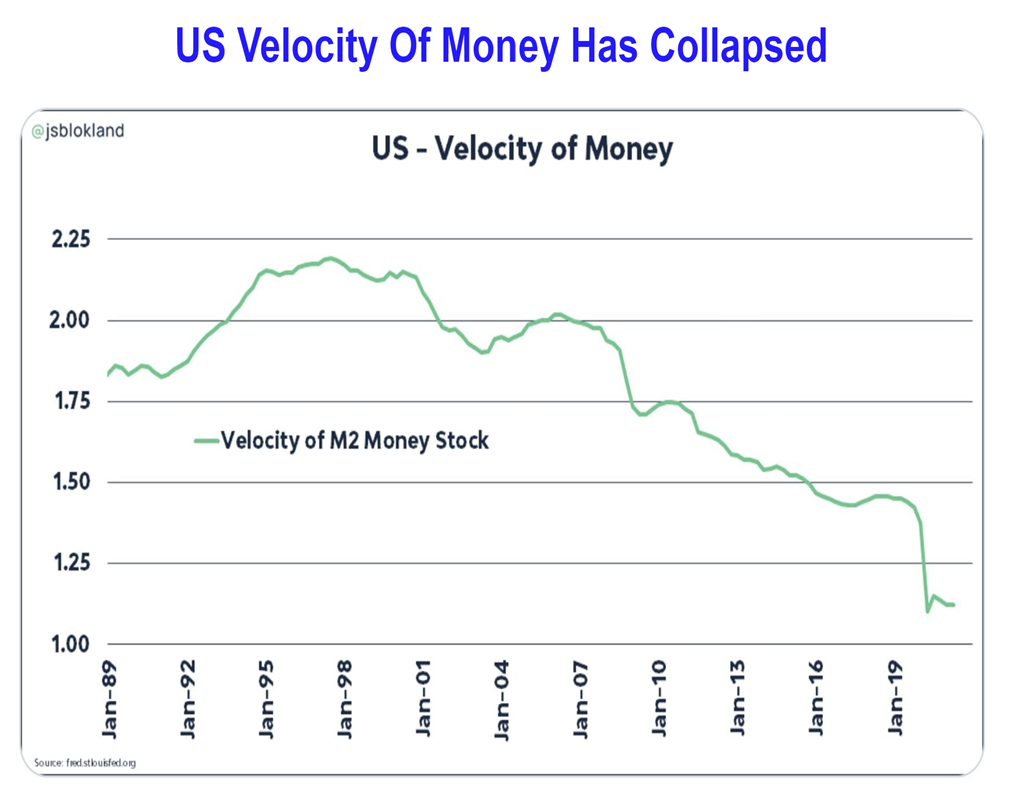 It’s an equally important point to make that reducing interest rates to near zero over the past dozen years or so has not resulted in more money creation as it once would have.  That’s’ because consumers and businesses are not borrowing in sufficient quantity to create more currency.  This chart showing the velocity of money confirms this.

Notice that the velocity of money has continued to decline.

When money is not moving, the only way the Fed can expand the money supply is via currency creation a.k.a. ‘quantitative easing’.

This currency creation and resultant inflation has led to real interest rates being negative.  In other words, an investor buying a low yield bond actually loses purchasing power as the inflation rate exceeds the yield on the bond. 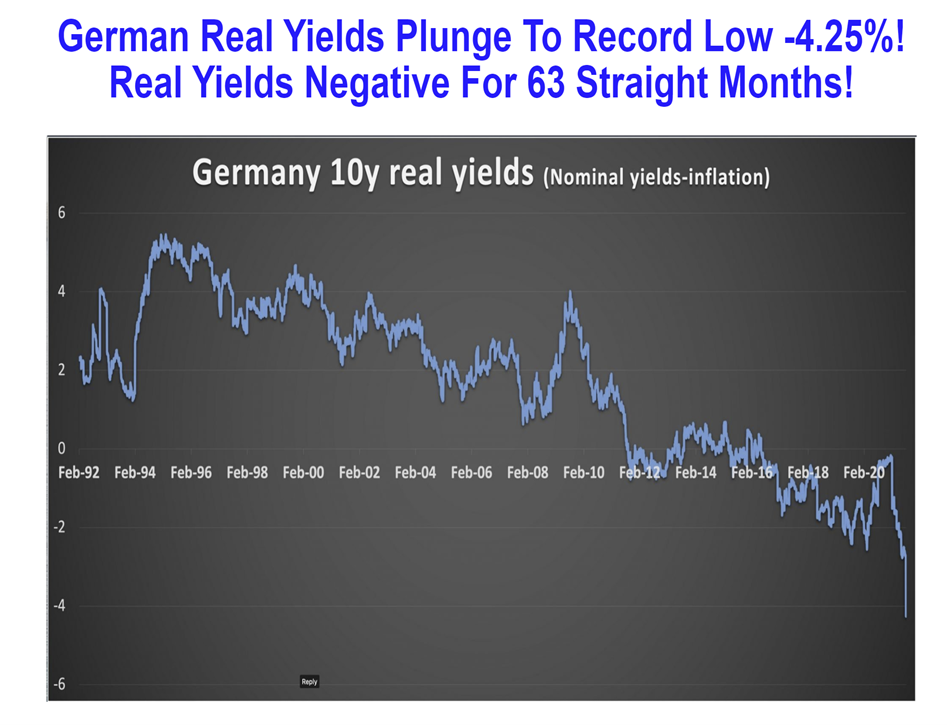 The chart republished on this page illustrates the German Bond market.  Notice from the chart that real interest rates are now negative and have been for 63 straight months.

This is now the case nearly everywhere in the world.  Presently, the 30-Year US Government Bond yield is under 2%.  As we’ve already noted the inflation rate is significantly more than that resulting in negative yields.

Despite emerging inflation and asset prices that are at historic highs, the monetary policy is not changing.

What will be the result?

This past week, I read an article in “The Epoch Times” which economist, Steven Moore was quoted.  Here is a bit from the article (Source:  https://www.theepochtimes.com/economist-stephen-moore-predicts-financial-crisis-within-next-18-months_3924539.html?utm_source=partner&utm_campaign=ZeroHedge):

Excessive government spending and mounting national debt will likely trigger a financial crisis in the next 18 months, economist Stephen Moore warned on July 28.

“It’s a very precarious time economically for the country,” Moore told The Epoch Times during the annual meeting of the American Legislative Exchange Council (ALEC) in Salt Lake City.

“There is a debt hangover coming. And if we stay on this path that the Biden administration wants us on, I believe there will be another financial crisis.”

His comments came after a group of bipartisan senators and the White House announced a deal on an infrastructure package with $550 billion in new federal spending. Soon after the announcement, the Senate voted 67–32 to begin debate on the measure, with 17 Republicans joining Democrats.

Many conservatives including Moore believe that vote for the bipartisan infrastructure bill is a de facto vote for President Joe Biden’s larger $3.5 trillion social package that calls for tax increases and higher spending on education, child care, climate change, and Medicare expansion.

“I think sometime in the next 18 months, there will be a big correction,” Moore said.

While I am not forecasting a ‘when’ for the big correction that Mr. Moore describes, I believe that the correction is going to be impossible to avoid.

As noted above, this week’s radio program is an interview with Dr. A. Gary Shilling, who has been a long-time “Forbes” columnist and is the publisher of the “Insight” newsletter.

I talk with Dr. Shilling about his economic forecast and investing forecast and ask him what asset classes he likes in the current environment.

The show is now posted on the website, www.RetirementLifestyleAdvocates.com.

You can also listen to the show as well as the weekly “Headline Roundup” webinar on the RLA app.

If you don’t yet own the app, just go to the app store on your phone and search for “YOURRLA”.  You can download the app for free and get access to all our free resources.

“Fish is the only food that is considered spoiled once it smells like what it is.”