An important anniversary is approaching this week.  Although it won’t be widely observed or likely even mentioned, it’s the anniversary of the event that led to current economic and investing conditions.

This coming Sunday, August 15 will mark 50 years since the US Dollar became a fiat currency.  On August 15, 1971, President Richard Nixon gave a televised speech during which he announced he would be instructing Treasury Secretary Connolly to temporarily suspend the redemptions of US Dollars for gold to protect the US Dollar from speculators.

Nixon, during his speech, also stated that he wanted to address a ‘bugaboo’, namely that there were many who were concerned that the move would negatively impact the purchasing power of the US Dollar.  Nixon stated that you might spend more if you wanted to buy a foreign car or take an overseas trip, but if you were among the overwhelming majority of Americans who didn’t make those purchases, your dollar would buy just as much in the future as it did presently.

50 years later, we know that the redemptions have been permanent, and the US Dollar has lost more than 95% of its purchasing power.

The Austrian economist, Ludwig von Mises, perfectly articulated the outcome of this money transformation in my view.

He said, “There is no means of avoiding the final collapse of a boom brought on by credit expansion.  The alternative is only whether the crisis should come sooner because of voluntary abandonment of further credit expansion, or later as a final and total catastrophe of the currency system involved.”

In other words, the currency creation ceases, and the crash happens, or the currency is destroyed, and the crash occurs.  Neither outcome is desirable and both eventualities are painful to endure.  Survival requires an understanding of this principle and preparation in your personal finances.

The beginning of the end of the current monetary system started exactly 50 years ago. In the next few years the world will experience the end of another failed experiment of unlimited debt creation and fake fiat money.

Economic history tells us that we need to focus on two areas to understand where the economy is going – INFLATION AND THE CURRENCY. These two areas are now indicating that the world is in for a major shock. Very few investors expect inflation to become a real problem but instead believe interest rates will be subdued. And no one expects the dollar or any major currency to collapse.

But in the last two years, money supply growth has been exponential with for example M1 in the US growing at an annual rate of 126%!

Von Mises defined inflation as an increase in the money supply. The world has seen explosive growth in credit and money supply since 1971 and now we are seeing hyperinflationary increases.

Hyperinflation is a currency event. Just since 2000 most currencies have lost 80-85% of their value. And since 1971 they have all lost 96-99%. The race to the bottom and to hyperinflation is now on. 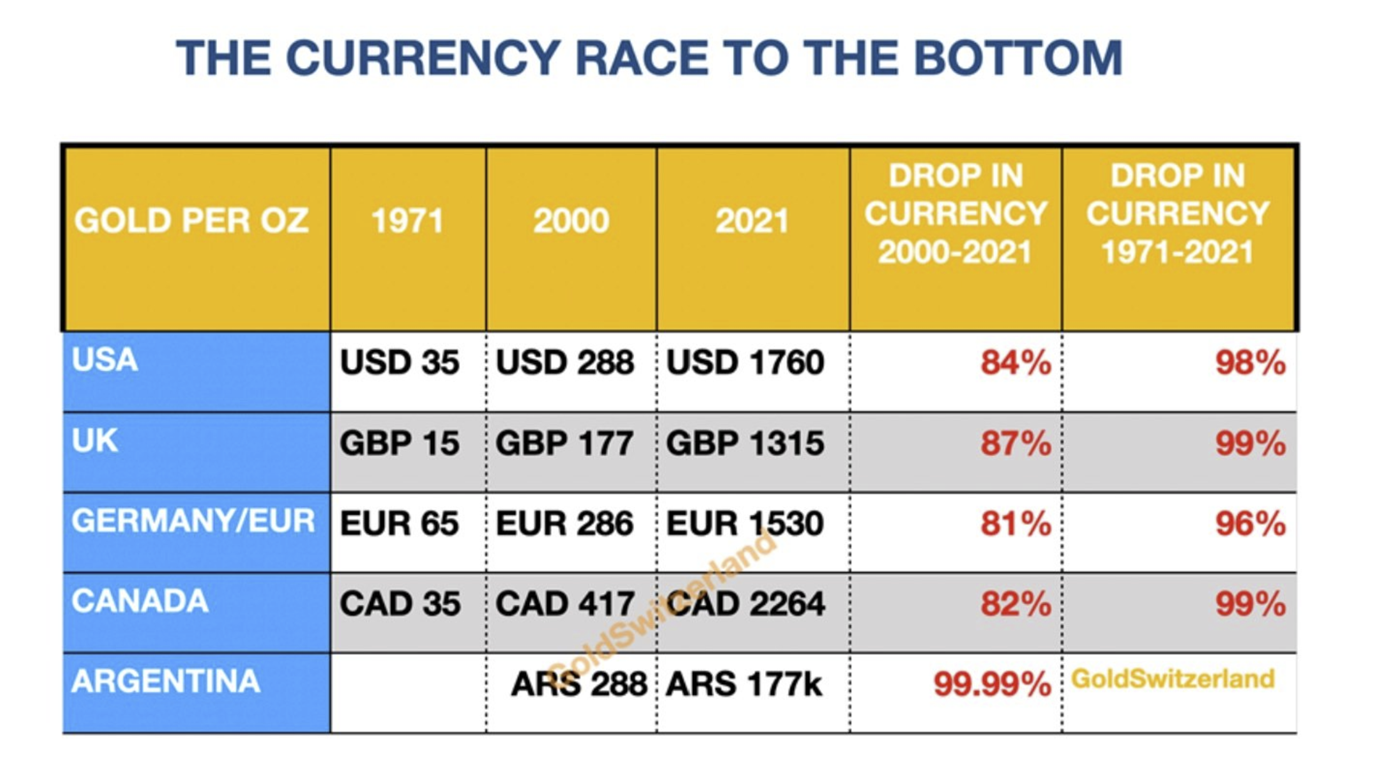 Mr. von Greyerz published this chart that illustrates the price of gold per ounce in various currencies.  Using this metric, from 1971 to the present, the US, the UK, Europe, and Canada have seen their respective currencies decline by 96% to 99%.

To say that we are on a slippery slope would not be accurate, we have already made the slide down the proverbial slippery slope, we are now just awaiting the outcome that von Mises forecast.

As many past guests on RLA Radio have stated, hyperinflationary events tend to escalate rapidly and climax relatively quickly as well.

Von Greyerz offers some terrific perspectives on this principle too.  This is from his piece:

Since the Great Financial Crisis in 2006-9, there has been an exponential growth in US Money Supply.

From 1971 to 2011 the growth seems modest at a compound annual growth (CAGR) of 6%. If the dollar purchasing power declined by the same rate, it would lead to prices doubling every 12 years. Or put in other terms, the value of the currency on average would drop by 50% every 12 years.

Then from 2011 when the Money supply started growing in earnest, M1 has grown by 24% annually. This means that prices in theory should double every 3 years.

Finally, from August 2019 to August 2021 M1 has gone up by 126% a year. If that was translated to the purchasing power of the dollar it would lead to prices doubling every 7 months.

Von Greyerz goes on to explain that von Mises defined inflation as an expansion of the money supply rather than an increase in prices.  To this point, there has not been a lot of price inflation experienced by consumers but there has been inflation in asset prices as I have discussed in previous issues of “Portfolio Watch”.

Von Mises and von Greyerz are discussing the same phenomenon that Thomas Jefferson described when he warned of inflation followed by deflation if the American people ever allow private bankers to control the issue of their currency.

Historically speaking, this cycle has repeated itself with amazing frequency.  Fiat currencies have a 100% failure record.

I remain solidly in this camp even though there are many respected, highly educated analysts who have different opinions.  Those who believe the US Dollar will be a safe haven moving ahead are coming to that conclusion assuming confidence in the US Dollar continues.

While confidence may continue for a period, over the longer term, confidence will have to disappear unless as von Mises said, there is a voluntary abandonment of credit creation.  While that would be the preferred outcome of the two von Mises describes, it does not seem that the current crop of politicians and policymakers will pursue this ugly, yet more desirable outcome.  Instead, they appear to be opting to kick the can down the road as long as possible, postponing the crash for as long as possible even though the crash will be worse as a result.

My new book “Retirement Roadmap” an updated version of last year’s “Revenue Sourcing” book will be released within the next 10 days.  It offers strategies for you to consider in your own, personal financial situation to help protect you from this eventuality.

This week’s radio program is an interview with Dr. Charles Nenner, a highly respected analyst who uses cycle research to examine markets and offer his forecasts.

Dr. Nenner is a frequent television commentator and a returning guest to RLA Radio.

During my conversation with Dr. Nenner, he explains the basis for his cycles research and offers his forecast for crypto-currencies, gold and silver, stocks, and government bonds.

The show is now posted on the website., You can listen now by clicking on the "Podcast" tab at the top of this page. You can also join us each Monday at 12 PM EST for the weekly “Headline Roundup” webinar or listen to the replay.

“Freedom is indivisible.  As soon as one starts to restrict it, one enters upon a decline on which it is difficult to stop.”