This week, in “Portfolio Watch”, we want to focus once again on proposed money changes being discussed and implemented around the world.

We will preface this discussion by once again stating the obvious – the current level of money creation is completely unsustainable.  History teaches us that money printing always ends badly and the end of the cycle sees money printing occurring in exponentially greater amounts.

Chronic, perpetual overspending eventually leads to money creation as investors become ever more skeptical of a government’s ability to repay the loan.  Once the money creation begins, it occurs in ever-increasing quantities.  It’s a self-feeding cycle that ends with a loss of confidence in the currency.

With that overview, there are two topics we want to discuss in this week’s issue.  Both suggest we are getting closer to that endpoint.

First, past radio program guest, Peter Schiff wrote an article this past week that RLA Radio Host, Dennis Tubbergen discusses in more detail on this week’s program.  The podcast version of the radio show is available via the RLA app and at www.RetirementLifestyleAdvocates.com.

Mr. Schiff makes the point that the primary creditors of the United States have lost their appetite for US Government debt.  That means that the monster deficit spending of the United States’ government is being financed by the central bank of the US, the Federal Reserve.  To state the obvious, the Federal Reserve has no money to loan the government without creating it out of thin air.

Here is a bit from Mr. Schiff’s piece (emphasis added):

Over the last year, the US government had borrowed over $4.2 trillion. The national debt now stands well above $27 trillion. There is no end in sight to the borrowing and spending and that raises a significant question: who is going to buy all of the bonds necessary to finance the government spending machine?

Not too long ago, Uncle Sam could count on foreign investors to gobble up a big chunk of his IOUs, but times are changing. In 2008, foreign investors held more than half of the outstanding Treasury debt. Today, that amount has plunged to the lowest level since the turn of the century.

Meanwhile, China is dumping Treasuries. It sold off about $13 billion in US Treasuries in Q3 and has shrunk its holdings by $40 billion over the last year.

Over the past five years, Japan’s and China’s combined holdings of US Treasuries have remains relatively stable.

You already know the answer.  Here is more from Mr. Schiff’s piece:

It looks like the responsibility (for financing US Government deficit spending) will increasingly fall on the Federal Reserve. In fact, the Fed is already backstopping the market and making this borrowing binge possible.

In Q3, the Fed bought $240 billion in US Treasuries. That brought its total Treasury holdings to $4.44 trillion. The central bank now holds a record 16.5% of the US debt load.

In the last 12 months, the Fed has doubled its holdings of Treasuries, adding a staggering $2.4 trillion in US government bonds to its balance sheet – most of that since March. The Fed’s total share of US debt has spiked from 9.3% in Q1 to 16.5%.

Without the Fed’s intervention in the bond market, it would be virtually impossible for the US government to borrow money at the current level. As we’ve seen, foreign demand is already waning, even with prices artificially inflated. Interest rates would have to soar in order to entice average investors to buy US Treasuries. The market would collapse.

It seems that there are now many central banks around the world who are openly stating that the easy money policies being pursued by most world central banks will soon have to come to an end.

As we have noted in previous newsletters, there will have to be a reset.  The reset will either be reactive in response to a currency collapse or proactive, in an effort to avoid that outcome and have a more favorable end result.  Many central banks are now publicly agreeing.

This from the Central Bank of Italy:

“Gold is an excellent hedge against adversity and high inflation. Gold cannot depreciate or be devalued. Gold … is not an asset ‘issued’ by a government or a central bank and so does not depend on the issuer’s solvency.” 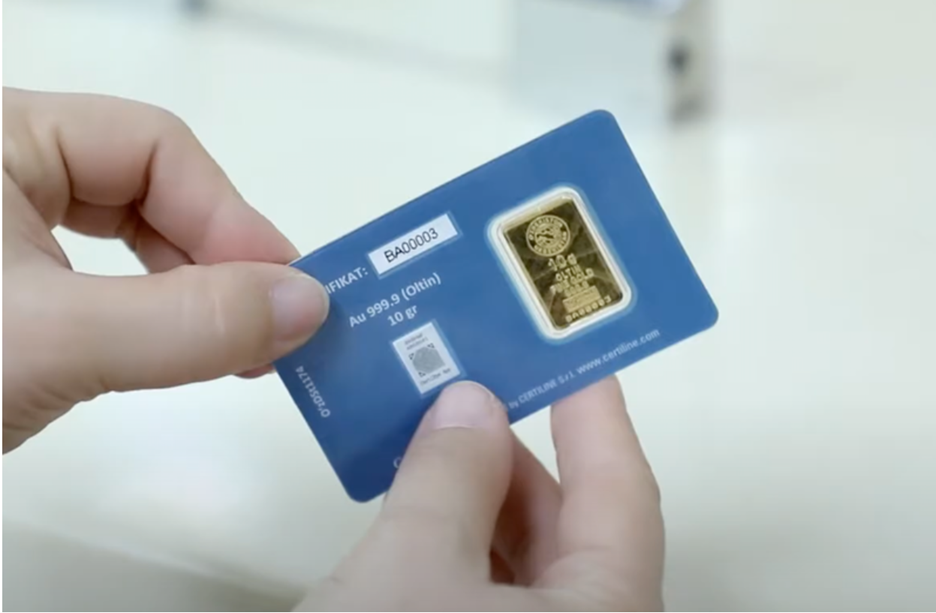 Starting last month, the central bank of Uzbekistan (yes, that IS a real country in central Asia) began to issue sealed gold bars with a QR code to allow for real-time verification.  The central bank is looking to encourage the use of gold for storing wealth while also increasing the circulation of gold.

The gold bars issued by the central bank of Uzbekistan are sealed with a unique membrane that changes color when broken, have a unique serial number and a QR code to allow for instant verification.

The gold bars are produced in different sizes:  5, 10, 20, and 50 grams.  The bars are all sealed in packages that are the approximate size of a credit or debit card.  The gold bars can be purchased at any of 28 commercial banks in the country and can be sold back to the bank at any time, even if the seal is broken.

The move to encourage the circulation of gold by the central bank in Uzbekistan is a logical extension of the bank’s internal policies.  Presently 57% of the bank’s reserves are held in gold.

This development is positive in our view.  It’s a step toward a proactive reset of a currency system.

As time passes, we would expect to see more of this by central banks, perhaps even a gold-backed digital currency.

While the ‘when’ is more difficult to predict than the ‘what’, it is clear that massive money creation will have to lead to a reset.  History teaches us that a currency reset, whether proactive or reactive, ends in gold or gold and silver as currency.

While there are many cryptocurrencies that have performed well of late, we are still more confident that gold and silver will eventually, ultimately, be the currency of choice as they have been for most of history.

Ultimately, it is our belief that we will see a ‘marriage’ between central bank-issued or government-issued digital currencies and precious metals.

We are hopeful that it will be proactive rather than reactive.

Since, as we move into 2021, some type of reset seems inevitable in the relatively near future, we would suggest that many investors have up to 20% of their portfolio in tangible assets such as gold and silver.

That recommendation to put 20% of one’s portfolio into precious metals could increase again in the future should next year see the US move into full-blown modern monetary theory (massive additional money printing) as a result of increased federal spending and deficits.

Although silver and gold rebounded last week, we are of the opinion that it’s a good time to add to precious metals holdings since prices are still down from recent highs.

Mr. Oliver’s analysis methods take into account the ongoing devaluation of fiat currencies.  Be sure to check out the interview now available on the app or at www.RetirementLifestyleAdvocates.com.

Michael explains his analysis methods and gives us his forecast for multiple markets.

“If a woman has to choose between catching a fly ball and saving an infant’s life, she will choose to save the infant’s life without even considering if there are men on base.”