The push toward central bank-issued digital currencies continues as inflation continues to demolish purchasing power around the world.

This chart, published by “Visual Capitalist,” illustrates how the official inflation rate is now double digits in more than half the countries around the world. 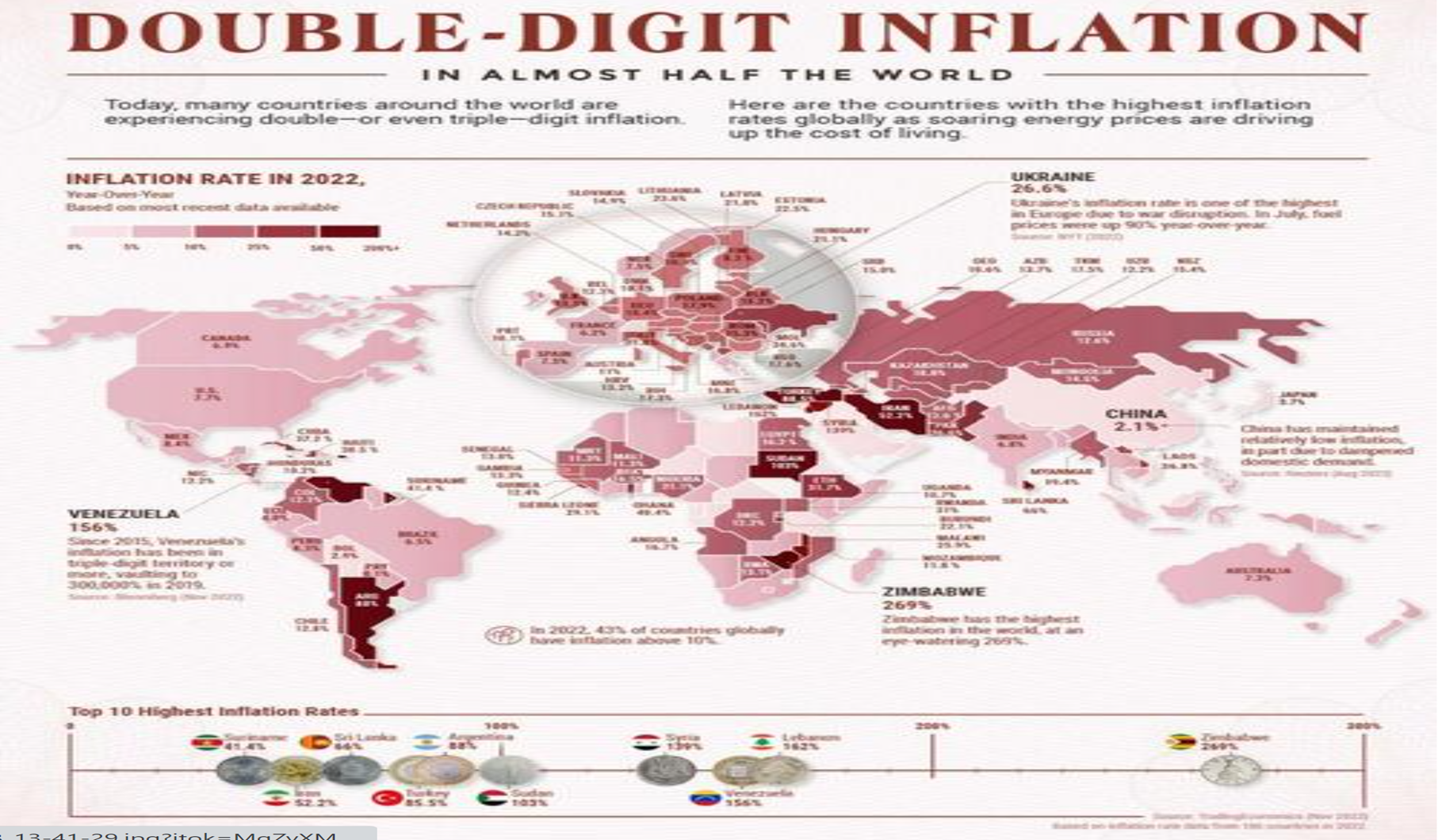 Not really all that surprising, given that politicians around the world overpromise and overspend while central banks subsidize their reckless monetary policies through currency creation.

It’s also important to remember that the real inflation rate in these countries is likely much higher since the reported inflation rate is the official rate which is typically massaged to make it more palatable to the populace.

As I have often stated, as we near the end of the currency-money cycle, there are currency changes that ultimately culminate with a currency being backed by a tangible asset like gold and/or silver.

One of the currency changes being aggressively pursued in many countries is a central bank-issued digital currency.

For those of you who are wondering how such a system might be implemented, you might be interested in what is now happening in the country of Nigeria.

It has also instructed banks to encourage customers to use the country’s eNaira central bank digital currency (CBDC) and digital payment channels — including mobile and online banking and card payments — instead of cash.

Cashback transactions at the point of sale will also be limited to 20,000 naira (US$45) a day while over-the-counter cash withdrawals in banks will be restricted to 100,000 naira (US$225) per week for individuals and 500,000 naira (US$1,128) a week for business customers, a CBN directive to Nigeria’s banks and financial institutions states.

The central bank is introducing the revised cash withdrawal limits in January 2023 “in line with the cashless policy of the CBN” and, rather than withdrawing cash, “customers should be encouraged to use alternative channels (internet banking, mobile banking apps, USSD, cards/POS, eNaira etc) to conduct their banking transactions”, the directive says.

Customers will still be able to make in-person cash withdrawals above the revised limits “for legitimate purposes” and “in compelling circumstances, not exceeding once a month”, but will be charged a 5% or 10% processing fee per withdrawal and will be required to provide state-issued identity documents, a “notarized customer declaration of the purpose for the cash withdrawal” and written authorisation by the CEO of the bank approving the transaction.

Banks will also be required to report all such transactions on “the CBN portal created for the purpose”.

The CBN launched the eNaira in October 2021, announced in November 2021 that nearly 500,000 consumers had downloaded the eNaira digital wallet and in June this year began letting consumers use feature phones to make CBDC payments.

Nigeria is forcing the use of digital currency.  Cash withdrawals are severely limited.

While this is Nigeria, it is worth noting that as the end of the fiat currency cycle has been reached historically, currency changes appear more frequently, and the changes are more dramatic.  This from “Mises.org”  (Source:  https://mises.org/wire/digital-currency-fed-moves-toward-monetary-totalitarianism):

The Federal Reserve is sowing the seeds for its central bank digital currency (CBDC). It may seem that the purpose of a CBDC is to facilitate transactions and enhance economic activity, but CBDCs are mainly about more government control over individuals. If a CBDC were implemented, the central bank would have access to all transactions in addition to being capable of freezing accounts.

It may seem dystopian—something that only totalitarian governments would do—but there have been recent cases of asset freezing in Canada and Brazil. Moreover, a CBDC would give the government the power to determine how much a person can spend, establish expiration dates for deposits, and even penalize people who saved money.

The war on cash is also a reason why governments want to implement CBDCs. The end of cash would mean less privacy for individuals and would allow central banks to maintain a monetary policy of negative interest rates with greater ease (since individuals would be unable to withdraw money commercial banks to avoid losses).

In 2020, China launched a digital yuan pilot program. As mentioned by Seeking Alpha, China wants to implement a CBDC because “this would give [the government] a remarkable amount of information about what consumers are spending their money on.”

The Chinese government is waging war on cash. And they are not alone. In 2017, the International Monetary Fund (IMF) published a document offering suggestions to governments—even in the face of strong public opposition—on how to move toward a cashless society. Governments and central bankers claim that the shift to a cashless society will help prevent crime and increase convenience for ordinary people. But the real motivation behind the war on cash is more government control over the individual.

And the US is getting ready to establish its own CBDC (or something similar). The first step was taken in August, when the Fed announced FedNow. FedNow will be an instant payment system and is scheduled to be launched between May and July 2023.

FedNow is practically identical to Brazil’s PIX. PIX was implemented by the Central Bank of Brazil (BCB) in November 2020. It is a convenient instant payment system (using mobile devices) without user fees, and a reputation as being safe to use.

A year after its launch, PIX already had 112 million people registered, or just over half of the Brazilian population. Of course, frauds and scams do occur over PIX, but most are social engineering scams (see here, here, and here) and are not system flaws; that is, they are scams that exploit the public’s lack of knowledge of PIX technology.

Additionally, the New York Fed has recently launched a twelve-week pilot program with several commercial banks to test the feasibility of a CBDC in the US. The program will use digital tokens to represent bank deposits. Institutions involved in the program will make simulated transactions to test the system. According to Reuters, “the pilot [program] will test how banks using digital dollar tokens in a common database can help speed up payments.”

If you needed another reason to get some of your wealth out of the fiat money system, there it is.

The radio program and podcast this week features an interview with Karl Denninger. I talk with Karl about the current state of the economy and got his forecast for Federal Reserve policy in the new year. If you haven't already listened to the show, you can listen now by clicking on the "Podcast" tab at the top of this page.

“People with courage and character always seem sinister to the rest.”