To say there is a lot going on that has the potential to radically affect you and your money would be a severe understatement.  In this week’s “Portfolio Watch”, we’ll look at a few different bits of data.

First, the lockdowns occurring in much of the country continue to wreak financial and economic devastation.  As we noted in the November client newsletter the “You May Not Know Report”, there is now much data that confirms lockdowns don’t reduce the spread of COVID-19 but they do cause massive amounts of economic damage much of which is now irreparable.

As an example, on December 7, the National Restaurant Association sent a letter to Nancy Pelosi, Kevin McCarthy, Mitch McConnell, and Chuck Schumer (Source:  https://restaurant.org/downloads/pdfs/advocacy/nat-l-restaurant-assoc-ltr-to-congress-12-7-2020) asking for relief for the restaurant industry.  In the letter, the association reports on the results of an annual survey of its members.  This year’s survey found:

-87% of full-service restaurants report an average revenue drop of 36%.

-17% of all restaurants are completely closed.  To put a number on that, that equates to 110,000 establishments that have now permanently closed.

Since the restaurant industry is devastated, it’s no surprise that the commercial real estate market is also beginning to unravel.  Cam Fine, the former president of Independent Community Bankers of America had this to say about commercial real estate (Source:  https://realinvestmentadvice.com/work-from-home-threatens-commercial-real-estate-valuations/):

While many businesses are closing permanently, still others are finding that employees can be as productive working from home as they can be working from the office.  As a result, many companies are allowing commercial real estate leases to expire.

This chart, compiled from US Postal service change of address data shows from which areas the largest migration is taking place.

According to the National Association of Realtors (Source:  https://realinvestmentadvice.com/work-from-home-threatens-commercial-real-estate-valuations/), in the cities of New York and San Francisco, from 11% to 15% of all professionals have left the city for areas they deemed more desirable. 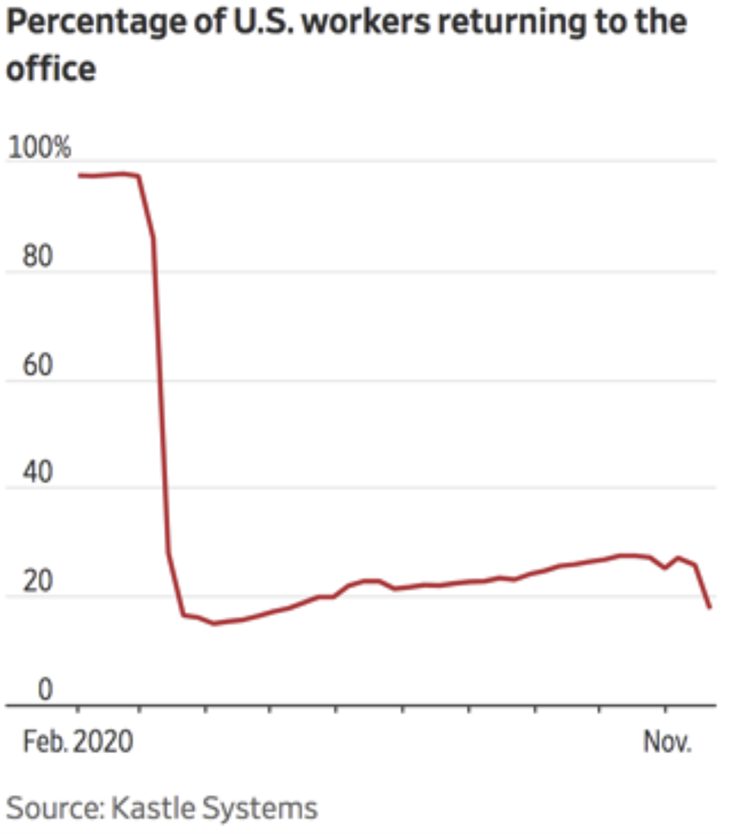 Manhattan has literally become a ghost town.  One building security firm working in Manhattan, Kastle Systems, reports that New York City has an average occupancy rate of just 15.9% and there is more Manhattan office real estate for rent than at any time since 2003. (Same source as noted above)

Kastle Systems published this chart that illustrates the percentage of US workers who are returning to the office.  Notice there has been little change since March of this year.

The country’s large cities have not only seen considerable disruption in the restaurant industry, but other businesses located in these cities have also been adversely affected.

Businesses located in these large cities are experiencing significant drops in revenue.  Core city small business report 40% to 60% declines in sales.  Businesses that depend on commuters have been hardest hit, these businesses include restaurants as we mentioned above, hotels, hair salons, barbershops, gyms, and laundries

These factors will all influence the broad economy,  The stock market should ultimately be affected; however, given the colossal levels of money printing by the Federal Reserve, the stock market could remain propped up since stocks are priced in US Dollars that are losing purchasing power.

Moving into 2021, we expect that the banking sector could be hit hard.  Since a large amount of commercial real estate is leveraged, declining occupancy rates will put landlords in the position of being unable to service the debt on the properties.

The Federal Deposit Insurance Corporation (FDIC) has identified 356 banks concentrated in the commercial real estate market.  Many of these banks are smaller, community banks; some are already under regulatory guidance.

Fed Chair, Jerome Powell, told a House committee in September that smaller banks often have more exposure to commercial real estate and have fewer financial resources to deal with the problem.  Mr. Powell testified that the Fed stood ready to rescue community banks if it became necessary.

Of course, the elephant in the room is how the Fed will rescue the banks, how additional potential stimulus gets funded, and how continued deficit spending gets funded.  The answer is more money creation.

As bearish as we are on the overall stock market (at least in real terms vs. nominal terms), the banking sector, the hospitality sector, transportation, and businesses that depend on discretionary consumer spending, there will be sectors that may perform well moving into 2021.

These sectors will likely include any business that is related to commodities or precious metals.  To that end, we have been researching and testing strategies for investors and retirees to help them capitalize on what is likely to be a ‘new normal’.  Once the dust settles on the political situation and we have more clarity, our clients will be getting more information from us on this topic.

We remain bullish on precious metals despite the recent pullback in price.  We especially like the prospects for silver.  When one combines Fed policy and the declining US Dollar with rising industrial demand for silver, it looks to us that 2021 could be the year that silver once again reaches its prior highs of about $50 per ounce.

Don’t forget, earlier this year the Federal Reserve changed the way it looks at inflation essentially deciding to let inflation run hotter than in the past.

At the Fed’s annual Jackson Hole meeting, Fed Chair Powell announced that the Fed would pursue a policy of ‘average inflation targeting’.  Prior to this announcement in policy change, the Fed targeted annual inflation of 2% as measured by the Consumer Price Index.

The Fed’s new ‘average inflation targeting’ policy will see the Fed allowing inflation to run higher than 2% to compensate for the times that the inflation rate is lower than 2%.

It’s obvious that the Fed is going to keep printing, so this policy change wasn’t a policy change at all; instead, it was an acknowledgment of a continuing policy.  After all, if you’re the Fed and your openly stated inflation goal is 2% and it runs over that (which it will with continued money creation), it’s helpful from a public relations perspective to have a stated policy that acknowledges you planned for this outcome.

Bottom line:  it’s a flawed policy that will end.  History teaches us it will have to end and when it does, those who are investing using “Wall Street Only” advisor strategies may find themselves financially ruined.

That’s why we believe many investors should own physical metals, have some stable assets from which to draw income, and invest tactically in 2021.  There will be some economic sectors that will be devastated and others that will prosper.

Investing and money management philosophies need to be adjusted accordingly.

As noted above, this week’s radio program features an interview with economist, John Williams.  Be sure to listen in using the app or at our website, www.RetirementLifestyleAdvocates.com.

Another reminder:  the "Your RLA" app gives you access to all of our resources.

Finally, thanks to all of you for your referrals.  If you know of someone who might appreciate a complimentary copy of the December “You May Not Know Report” titled “Capitalizing on Uncertainty”, just give the office a call at 1-866-921-3613.

“I’m getting so old my insurance company sends me half a calendar.”