In reading an article penned by Egon von Greyerz this past week, I was reminded of the prescient writings of George Orwell as it relates to where we now find ourselves economically and politically.

While I would encourage you to read the entire article for yourself, let me share some excerpts with you (Source: https://goldswitzerland.com/us-doublespeak-will-not-stop-golds-imminent-surge/):

Propaganda, lies and censorship are all part of desperate governments actions as the economy disintegrates.

We are today seeing both news and history being rewritten to suit the woke trends that permeate society at every level, be it covid, the number of genders, the Ukraine war or government finances.

I have in many articles covered the explosion of money printing and debt which is an obvious sign that the global financial system is approaching collapse and default . The consequences will be far reaching to every corner of the globe and all parts of society.

See my recent article “In The End The Dollar Goes To Zero And The US Defaults” which outlines the probable course of events in 2023 and afterwards.

Later on in this article, I will look at the consequences in relation to markets and what ordinary people (investors?) can do to prepare themselves.

ORWELL PREDICTED THE FALSIFICATION OF HISTORY 73 YEARS AGO

“Every record has been destroyed or falsified, every book rewritten, every picture has been repainted, every statue and street building has been renamed, every date has been altered. And the process is continuing day by day and minute by minute. History has stopped. Nothing exists except an endless present in which the Party is always right.”― George Orwell, 1984

Let’s just look at government finances. As we are entering the end of an era with deficits and debts running out of control, the truth becomes an inconvenience to governments and must therefore be suppressed or rewritten.

If we just look at the US Doublespeak in regards to the 2021-2 budget deficit, we find that the US Treasury reported on Oct 21 this year:

WASHINGTON, Oct 21 (Reuters) – The U.S. government on Friday reported that its fiscal 2022 budget deficit plunged by half from a year earlier to $1.375 trillion, due to fading COVID-19 relief spending and record revenues fuelled by a hot economy, but student loan forgiveness costs limited the reduction. The U.S. Treasury said the $1.400 trillion reduction in the deficit was still the largest-ever single-year improvement in the U.S. fiscal position as receipts hit a record $4.896 trillion, up $850 billion, or 21% from fiscal 2021.

What an achievement by the Treasury Secretary Ms Yellen and her team to halve the deficit to only $1.4 trillion!

But let’s look a bit more closely what really happened.

If the deficit was “only” $1.4 trillion we must assume that the Federal Debt also increased by the same amount?

So again we can look at the 1984 Orwell quote above “Every record has been destroyed or falsified….”

The deficit wasn’t halved at all. Instead half of it was stated below the line as a budget adjustment. So they can lie about the Budget Deficit but so far they are not lying about the level of the Debt. But that will certainly happen one day too. Remember that the Clinton so called surpluses in the late 1990s were produced with the same type of creative accounting. There were no real surpluses. They were just shuffled below the line since debt continued to grow.

Good old Mark Twain gave us the useful quote about lies and statistics: 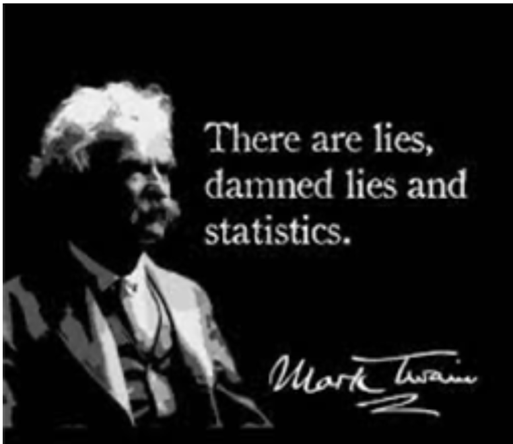 The clouds look extremely dark for 2023 and beyond.

As I have pointed out above, there is no attempt to reach a peace settlement in Ukraine. Weapons and money are pouring in to keep the war going. And the sanctions forced upon Europe by the US are having a devastating effect for the citizens of most European countries. Energy costs are up 2-3X or more for many consumers and food inflation in Germany for example jumped 21% year on year in November.

In the UK, many ordinary people cannot afford to keep their heating on or to eat properly. And this is before the cold winter sets in.

The situation in Ukraine seems to deteriorate and with Russia and the US involved, as well as China in the periphery, it could easily escalate.

But as I have spelt out numerous times, $300 trillion of global debt and $2 quadrillion of quasi debt in the form of derivatives can only end in currencies going to zero and sovereign borrowers defaulting.

A global sovereign default should be seen as an indisputable fact and it is only a question of how long it takes.

These events are normally a process. As Hemingway said, you go bankrupt “Gradually and then suddenly”.

The beginning can be a slow process and then at some point the shock comes so fast that no one will have time to react.

So no-one must believe that there will be time to get out once the early “gradual” phase starts.

Just to be clear, the gradual phase is here already although the world is in denial. The buy the dip mentality is still prevailing as evidenced by the partial recovery in stock markets.

Few realise that this is it and the next devastating fall in stocks is going to fool practically all investors. The majority will not get out but hope for a correction so they can exit at a higher level. And once the correction comes, they will be bullish again.

Once everyone is back into the market it will fall again. Most of the investors will be fooled most of the time until their portfolio is virtually worthless.

The Western world hasn’t experienced a real bear market since 1929-32. That time it took 25 years for the Dow to recover to the 1929 high.

The generosity of Central banks has made stock investments a one way game since the early 1980s. But now the game is up and few will realise it until they have lost everything.

So the “suddenly” will be like an earthquake seemingly coming out of nowhere. It can come in 2023 or it might take a few years.

What is certain is that there will be no warning. As I said, we have already had plenty of warnings but gullible investors will not believe them. This is just like the curse of Cassandra. She was given the gift of predicting disastrous events. But her curse was that no one would believe her. I wrote about Cassandra in this article five years ago. In the same article, I also made a timely gold forecast which most investors sadly ignored.

Gold has risen strongly in this century, although most investors don’t actually realize how strong it has been.

Since the beginning of the 2000s gold has outperformed every major asset class, including stock markets. But the move has been in two halves with the first 11 years being spectacular for gold which moved up 7X in dollar terms. Since then a strong dollar has made gold’s performance less spectacular.

But if we look at an annual chart of gold in US dollars it still looks very impressive.

Both fundamentally and technically gold now looks ready for another major move. The first target is $3,000 on the way to much higher levels. But as I often point out, gold must be measured in ounces or kilos and not in what will be worthless fiat money whether paper or digital.

As I suggested last week, getting some of your wealth out of the fiat money system, given current world circumstances, is likely a good idea.

The radio program and podcast this week features an interview with Alasdair Macleod. We discuss the Federal Reserve's options, none of which are good, and I get his insights on the likely direction of the economy in the new year.

If you haven't had a chance to listen to the show, you can do so now by clicking on the "Podcast" tab at the top of this page.

“Education is the best provision for the journey to old age.”