The Morgan Stanley Diversified Select Index values are not being reported this week; as this issue was being published, those numbers were temporarily unavailable.  I apologize for any inconvenience and hope to have those updated values for you next week.

In last week’s issue of “Portfolio Watch” I looked at various sectors of the economy and offered perspective on these sectors as we move into the New Year.  If you missed last week’s issue, you can find it at www.RetirementLifestyleAdvocates.com.  To briefly summarize, I am bullish on companies that can benefit from commodity price inflation including mining companies.

Ever since the book “New Retirement Rules” was published more than five years ago, I have been forecasting one of two economic outcomes.  Deflation or inflation followed by deflation.

It now seems fairly evident that the latter is the path on which we are traveling. 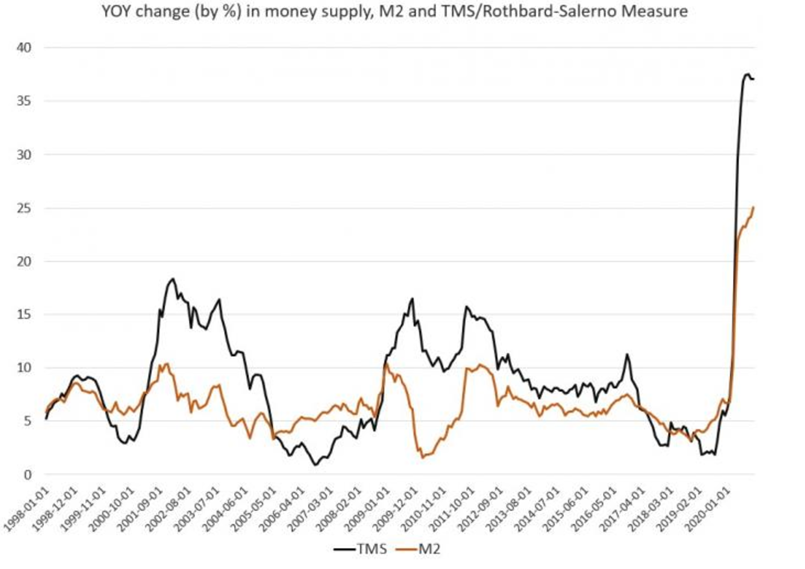 This chart illustrates the growth in the M2 money supply.  M2 is immediate money as well as ‘near-immediate money’.  M2 includes currency and deposits that are immediately available like checking accounts and money that is available but may be subject to withdrawal penalties like time deposits and money market accounts.

Notice from the chart (Source:  https://www.silverdoctors.com/headlines/world-news/us-money-supply-was-up-37-percent-in-november/)  that the money supply increased by 37% year-over-year in November.

That is simply mind-boggling when you let that fact sink in.

The chart was originally published in an article authored by Ryan McMaken of the Mises Institute.  In the piece, Mr. McMaken noted that the Fed’s assets are up about 600% from just before the 2008 financial crisis.  The Fed’s balance sheet now stands at $7.2 trillion which, in plain terms, means that is how much money the Fed has literally created out of thin air.

History teaches us that massive levels of money creation leads to price inflation; should the money printing continue long enough at a high level; currencies are eventually affected.  Money creation happens when debt levels are too high to manage using ‘honest’ means.  When currencies fail, debts don’t vanish, they are simply redenominated in a new currency that the population accepts.

That’s when deflation kicks in.

Collectively, we’ve wandered a long way from the vision of our founding fathers in many ways.  As far as currency is concerned, Thomas Jefferson gave us sage advice that we have totally ignored.  Here are a couple of relevant quotes from Mr. Jefferson:

“If the American people ever allow private banks to control the issue of their currency, first by inflation then by deflation the banks and corporations that will grow up around them will deprive the people of all property until their children wake up homeless on the continent their fathers conquered.”

“I believe that banking institutions are more dangerous to our liberties than standing armies.”

Now, it seems, that Mr. Jefferson’s warnings of inflation followed by deflation are becoming reality, barring a pro-active currency reset which seems unlikely. 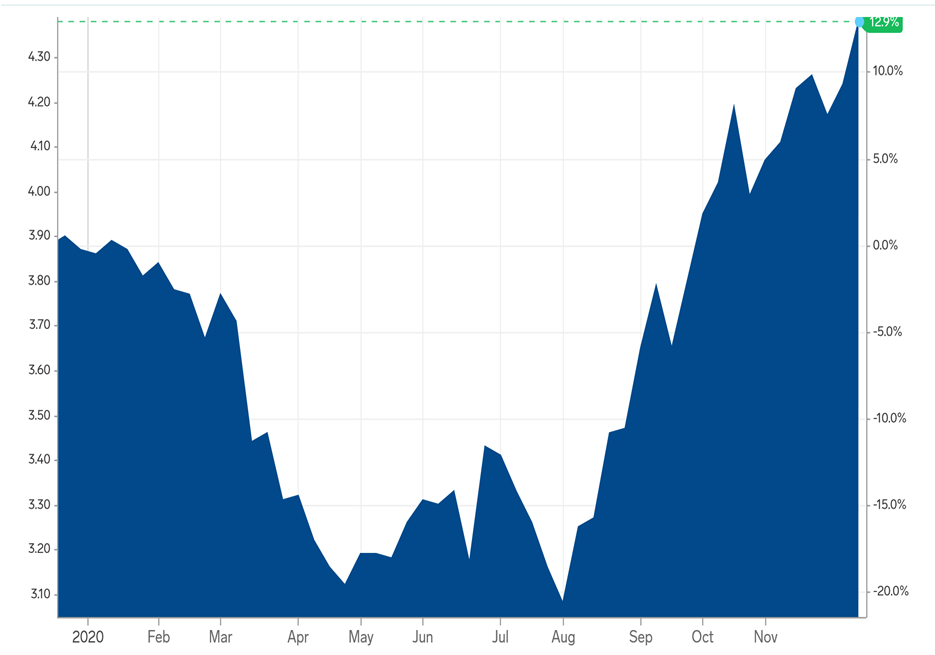 Absent a proactive reset, the reactive reset predicted by Mr. Jefferson will be the ultimate outcome.

As noted, we are already on that path.  The signs of inflation are here and intensifying.

This chart of corn prices shows that corn prices have risen about 40% since the first of August.

Granted, corn prices have been depressed, which has some analysts arguing that prices were due to rebound.  But it’s interesting that corn prices rose 40% and the M2 money supply increased by about the same percentage year-over-year.

It’s not just corn prices moving up, the same pattern can be seen in many commodities as we have been noting on our weekly update webinars.  (The webinar replays can be found at www.RetirementLifestyleAdvocates.com.  The replays are also available via the Your RLA app which is also available at www.RetirementLifestyleAdvocates.com.) 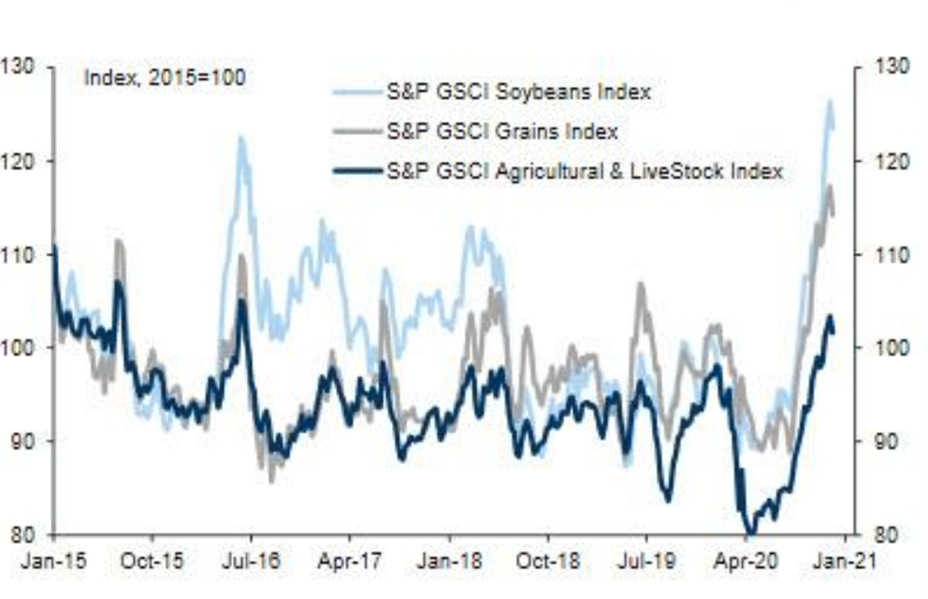 This chart shows the soybean index, the grains index, and the agricultural and livestock index all rising dramatically since early 2020 when the extremely aggressive money creation began.

In rough terms, the soybean index is up about the same 40% as is corn, the more general grains index is up slightly less than that, and the agricultural and livestock index is up a bit more than 30%.

This is significant food price inflation in a noticeably short period of time.

Does this rapid, massive inflation signal the beginning of hyperinflation?

Past radio guest Jeff Deist, President of the Mises Group, recently penned a piece that suggested Americans read the book “The Death of Money” by Adam Fergussen.  I have read the book and would also suggest adding it to your reading list.

Mr. Deist correctly notes that many Americans can’t even consider the prospect of hyper-inflation.  That’s something that happens in faraway places, banana republics if you will, not in the world’s largest and most prosperous economy.  Here is a bit from Mr. Deist’s piece (I’ve added the emphasis):

Ours is a nation willfully lacking in knowledge and understanding of money; a cynic might think this lack of apprehension is by design. Money is seldom discussed in schools, popular media, or politics. And almost a century after the stark lessons of 1923 Germany, the West is convinced it can't happen here. In our overwhelming material abundance, aided by the natural deflationary pressures of markets, we simply have lost our ability to imagine a hyperinflationary scenario. Sure, there have been currency meltdowns since the two world wars in places like Yugoslavia, Zimbabwe, Bulgaria, and Argentina. Yes, Venezuela and arguably Turkey face currency crises today. But we need not worry about this, because modern central banks—especially the US Federal Reserve and the European Central Bank—have tamed inflation through sheer technocratic expertise and a willingness to use extraordinary monetary policy tools.  Asset purchases and balance sheet expansion, ultralow or negative interest rates, and a determination to provide as much "liquidity" as an economy needs are the new normal for central bankers. Thanks to this open embrace of centrally planned money, former Fed chair (and likely future Treasury Secretary) Janet Yellen assured us we need not expect another financial crisis in our lifetime.

Despite the assurances of central bankers that everything is under control and there is nothing to worry about, money creation has been off the charts and is now beginning to create inflation, food inflation in particular.

It is inflation in essentials that accelerates hyperinflation.  Once the average citizen fully wakes up to the fact that it’s better to have something tangible than to have fiat currency; we will reach a tipping point.  At that tipping point, the price inflation numbers go off the charts.

Given the inflation numbers that I reviewed in this week’s “Portfolio Watch”, that tipping point is fast approaching.  Our team has been working for many years to help people prepare for this inflation followed by deflation outcome that now seems more certain absent a thoughtful proactive currency reset.

Owning more tangible assets now before the tipping point is reached, will be key to surviving significant price inflation.

And, as for Ms. Yellen’s assurance that there will never be another financial crisis in our lifetime; I don’t find much comfort from it.  History teaches us that never is an exceedingly long time and each time current policies have been pursued, the outcome has been the same, 100% of the time.

This week’s radio program features an interview with former President of the Foundation for Economic Education and free-lance journalist, Mr. Larry Reed.  Larry is an astute economic and political historian.  I chat with Larry about Woodrow Wilson’s brand of progressivism and draw parallels to today’s economic and political climate.

I think you will find the perspective to be thought-provoking.

The interview is available by clicking on the "Podcast" tab.

Thanks to all of you for your referrals.  If you know of someone who might appreciate a complimentary copy of the December “You May Not Know Report” titled “Capitalizing on Uncertainty”, just give the office a call at 1-866-921-3613.