Stocks continued their rough stretch last week.  While we could see a Santa Claus rally this month as we often do as the year comes to a close, given how extended stocks are from what would be considered to be more ‘normal’ levels, we may not experience the traditional year-end rally.

Last week, I examined the math behind the colossal national debt, the gigantic federal operating deficit and concluded that since the Federal Reserve, the nation’s central bank controlled by private bankers, is now the buyer of last resort of US Government debt, the Fed would have no choice but to continue to create currency further fueling the inflation that is now here.

What that means, in a nutshell, is that the Fed is creating currency out of thin air and then using that newly created currency to fund the federal government’s operating deficit.

Despite the public talk of tapering, or slowing the rate of currency creation, unless the Federal government cuts spending, the Fed will have no choice but to continue to create currency.

This past week, I found an article written by Matthew Piepenburg of Matterhorn Asset Management that articulated this idea that I put forth last week quite articulately.  Here is a bit from the article (Source:  https://goldswitzerland.com/latest-treasury-fed-and-bis-reports-confirm-all-twisted-paths-lead-to-gold/)

History’s patterns confirm that the more a system implodes under the weight of its own self-inflicted extravagance (typically fatal debt piles driven by years of war, wealth disparity, currency debasement and political/financial corruption), the powers-that-be resort to increasingly autocratic controls, distractions and automatic lying.

The list of such examples, from ancient Rome, 18th century France, and 20th century Europe to 21st century America are long and diverse, and whether it be a Commodus, Romanov, Batista, Biden, Franco, or Bourbon at the helm of a sinking ship, the end game for bloated leaders reigning over-bloated debt always ends the same: More lies, more controls, less liberty, less truth, and less free markets.

As promised above, however, rather than just rant about this, it’s critical to simply show you. As I learned in law school, facts, alas, are far more important than accusations.

Toward that end, let’s look at the facts.

Earlier this month, the Fed and Treasury Department came up with a report to discuss, well, “recent disruptions” … 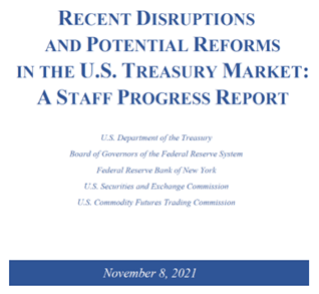 The first thing worth noting is the various “authors” to this piece of fiction, which confirm the now open marriage between the so-called “independent” Fed and the U.S. Treasury Dept.

If sticking former Fed Chair, Janet Yellen, at the helm of the Treasury Department (or former ECB head, Mario Draghi, in the Prime Minister’s seat in Italy) was not proof enough of central banks’ increasingly centralized control over national policy, this latest evidence from the Treasury and Fed ought to help quash that debate.

In the report above, we are calmly told, inter alia, that the U.S. Treasury market remains “the deepest and most liquid market in the world,” despite the ignored fact that most of that liquidity comes from the Fed itself.

Over 55% of the Treasury bonds issued since last February were not bought by the “open market” but, ironically, by private banks which misname themselves as a “Federal Open Market Committee”

The ironies (and omissions) do abound.

But even the authors of this propaganda piece could not ignore the fact that this so-called “most liquid market in the world” saw a few hiccups in recent years (i.e., September of 2019, March of 2020) …The cabal’s deliberately confusing response (and solution), however, is quite telling, and confirms exactly what we’ve been forecasting all along, namely: More QE by another name.

Specifically, these foxes guarding our monetary hen house have decided to regulate “collateral markets and Money Market Funds into buying a lot more UST T-Bills” by establishing “Standing Repo Facilities for domestic and foreign investors” which are being expanded from “Primary Dealers” to now “other Depository Institutions going forward” to “finance growing US deficits” by making more loans “via these repo facilities (SRF and FIMA).”

Folks, what all this gibberish boils down to is quite simple and of extreme importance.

In plain speak, the Fed and Treasury Department have just confessed (in language no one was ever intended to understand) that they are completely faking a Fed taper and injecting trillions more bogus liquidity into the bond market via extreme (i.e., desperate) T-Bill support.

Again, this is simply QE by another name. Period. Full stop.

The Fed is cutting down on long-term debt issuance and turning its liquidity-thirsty eyes toward supporting the T-Bill/ money markets pool for more backdoor liquidity to prop up an otherwise dying Treasury market.

Again, this proves that the Fed is no longer independent, but the near-exclusive (and rotten) wind beneath the wings of Uncle Sam’s bloated bar tab.

Or stated more simply: The “independent” Fed is subsidizing a blatantly dependent America.

Mr. Piepenburg brilliantly deciphers how the Fed is claiming to be seriously considering slowing the rate of currency creation, but in reality, it is not.  It is simply changing the way that newly created currency is subsidizing the deficit operations of the US Government.

That is congruent with the deficit and debt math that we have been analyzing.  It now seems that the Fed will create currency until the consequences are too severe to bear.

The US government is currently spending $7 trillion annually but the tax revenue is ONLY $4 trillion. So there is a net annual deficit of a mere $3 trillion or 43% of the US budget.

How can anyone believe that the US can repay a debt of currently $29 trillion and rising to $50 trillion with an annual deficit of $3 trillion – a deficit which is rising exponentially. The simple answer is that they never will repay it. Instead, it will increase uncontrollably.

As I said at the beginning of the article – Evil is the root of all fiat money as a 50 fold increase in the US debt since 1981 can only be achieved through corrupt means.

And don’t believe that the Fed will really taper the $120 billion a month that they are printing. They have declared a $15 billion tampering programme but that is a FAKE TAPER as my colleague Matt Piepenburg wrote about.

As expected they are cooking the books, giving with one hand and taking back with the other one – Plus ça change….. (the more it changes, the more it stays the same).

I believe that we find ourselves at the point in time, as others throughout history have found themselves, that the politicians and policymakers of the last 50 years have collectively brought us to the point that the only possible way to postpone a titanic deflationary collapse is to continue to create currency.

Notice that I used the word postpone rather than the word avoid.  Debt levels dictate that they are too high to ever be paid with honest money – so they won’t be.  Instead, the politicians and policymakers will continue with currency creation until they can’t.  At that point, the deflationary collapse will occur.

As I stated last week, in my view, it’s never been more important to have an income plan that’s funded with some assets to help preserve assets in a deflationary environment and some assets that will help to act as an inflation hedge.

This week’s radio program is an examination of these topics in detail.  There is no guest expert; instead, we will look at the Fed’s alternatives in detail.  I think you’ll find the program to be informative.

You can listen now by clicking on the "Podcast" tab at the top of this page.

“I remain just one thing, and one thing only, and that is a clown. It places me on a far higher plane than any politician”