The recent rally in stocks looks to be a countertrend rally as the primary trend in stocks remains down until the November highs are taken out.

There are many things to discuss in the economy and the financial markets but one of the big stories last week was rising interest rates.

Keep in mind when interest rates rise, the price of bonds fall.

Keep in mind that when mortgages become more expensive, marginal home buyers are priced out of the market.  While we won’t see the numbers for a while, that is undoubtedly beginning to happen.

This from “Wolf Street” (Source: https://wolfstreet.com/2022/02/05/rough-day-in-the-bond-market-treasury-yields-spike-30-year-fixed-mortgage-rate-nears-4-wheres-the-magic-number/):

The one-year yield spiked 11 basis points to 0.89%. This is up from near-0% in September last year. Over those five months, the world has changed. 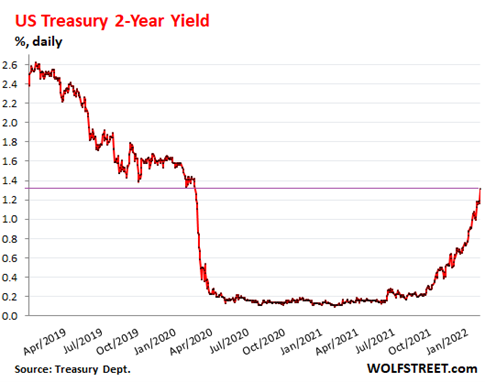 The one-year yield and the two-year yield are particularly sensitive to the market’s outlook for monetary policy changes by the Fed – namely the dreaded rate hikes this year and next year, as CPI inflation has hit 7.0%.

Despite these jumps in yields, they remain ridiculously low and deeply negative in “real” terms: Minus CPI inflation, the one-year yield is still -6.1%; and the two-year yield is -5.7%. 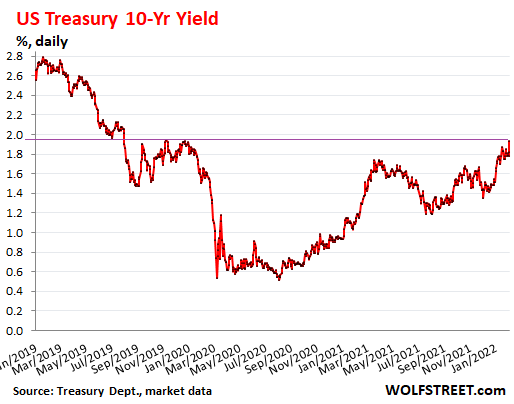 The price of the iShares 7-10 Year Treasury Bond ETF [IEF], which tracks Treasury bonds with remaining maturities between 7 and 10 years, fell 0.8% on Friday and is down about 9% from the range in April-September 2020. The ETF yields 0.9% annually, and Friday wiped out nearly a year’s worth of yield.

The price of the iShares 20+ Year Treasury Bond ETF [TLT], which tracks Treasury bonds with remaining maturities of 20 years or more, fell 2.1% on Friday and is down about 18% from the peak in July 2020. The yield is currently 1.6% annual. A few hours on Friday incinerated well over a year’s worth of yield. 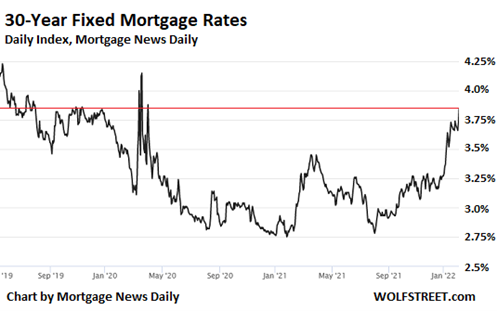 e rate reaching an average of 3.85%, according to the daily index by Mortgage News Daily. This is the highest rate since late 2019 – except for the rate chaos in March 2020, when rates spiked and plunged from one day to the next:

The 30-year mortgage rate moves roughly with the 10-year Treasury yield, but with a spread, given that the average 30-year mortgage is paid off in less than 10 years, either because the homeowner sells the home or refinances the mortgage.

And these increases in Treasury yields and mortgage rates are a reaction to what the Fed is about to embark on: The next rate-hike cycle and the next quantitative tightening (QT) cycle, which will do the opposite of what the Fed’s interest rate repression and massive QE had done. The Fed has been communicating its plans, and Powell locked in the date for the first-rate hike: March 16.

One, people rush to buy a home to lock in the still low mortgage rates; so initially, rising mortgage rates create a flurry of activity.

And two, with each uptick in mortgage rates, more homebuyers hit the ceiling of what they can afford, and they drop out. This is not visible in the data at first since those people are outnumbered by the flurry of people desperate to lock in the low mortgage rates.

I continue to be of the mindset that the Federal Reserve will change course and once again pursue easy money policies since the alternative is a deflationary price collapse.

The question is whether or not they can once again pump up asset prices.  While it’s not completely out of the question, it’s also very obvious that with each new bubble, more currency creation is needed to achieve watered-down results.  That’s how we can be assured the Fed will ultimately fail.

The question is when the deflationary asset repricing reset occurs.  Will it be soon or will the Fed inflate another bubble first?

As I have been suggesting, the best course of action is to hedge for both inflation and deflation using the Revenue Sourcing™ planning strategy.

This week’s radio program and podcast features an interview with technical analyst Dr. Robert McHugh. Dr. McHugh discusses his forecast for stocks, bonds, the US Dollar, gold, and silver.

Bob and I also discuss the role cryptocurrencies may play in the future.

It’s a terrific interview as Bob offers his insights and forecasts. You can listen now by clicking on the "Podcast" tab at the top of this page.

“The Supreme Court has ruled that they cannot have a nativity scene in Washington DC.  This wasn’t for any religious reasons.  They couldn’t find three wise men and a virgin.”