Last week, I observed that the rally in stocks appeared to be a countertrend.  That observation seems correct at this point.

The S&P 500 and the Dow Jones Industrial Average both finished the week last week below their respective 200-day moving averages on heavy trading volume.  This could mean more downside for stocks moving ahead.

The economic headlines last week were dominated by inflation, which has been the story of late.  The January inflation numbers were the highest year-over-year in more than 40 years with the officially reported number coming in at 7.5%. 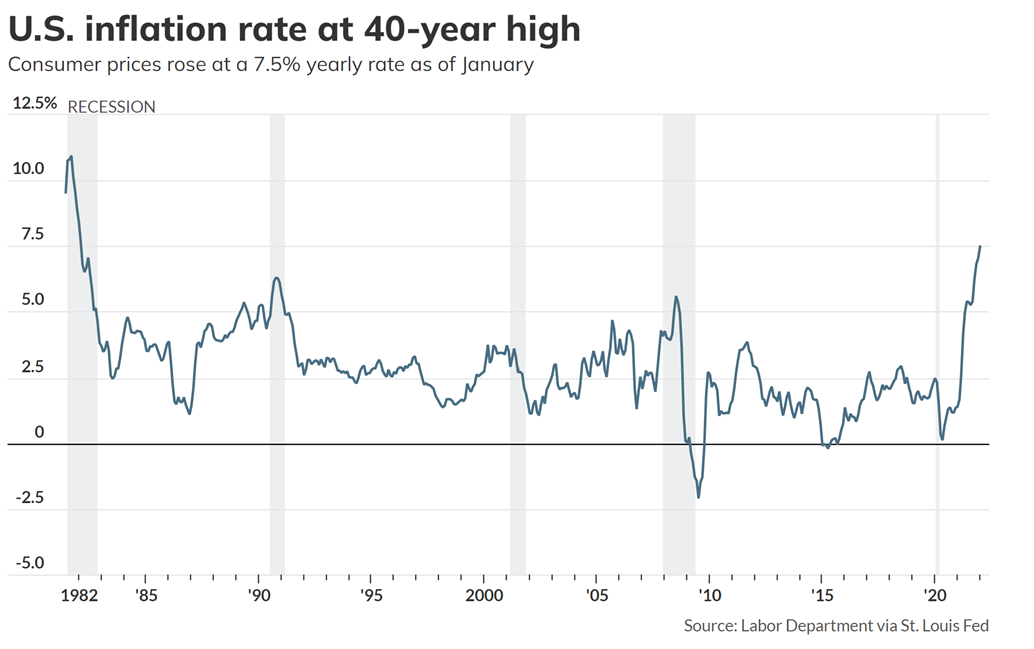 The numbers: The U.S. rate of inflation climbed again in January to 7.5% and stayed at a 40-year high, suggesting upward pressure on consumer prices is unlikely to relent soon and putting more pressure on the Federal Reserve to act.

The consumer price index rose 0.6% in the first month of the new year, driven by big advances in rent, food and energy. The increase exceeded Wall Street’s forecast of a 0.4% gain.

The Fed is on track to raise interest rates in March for the first time in four years to try to snuff out the surge in inflation. The January CPI is likely to heighten the central bank’s urgency, perhaps even forcing the Fed to consider an unusual half-percentage point increase in its benchmark short-term interest rate.

The increase in the so-called core rate over the past 12 months moved to 6% from 5.5%. That’s the highest level since August 1982. 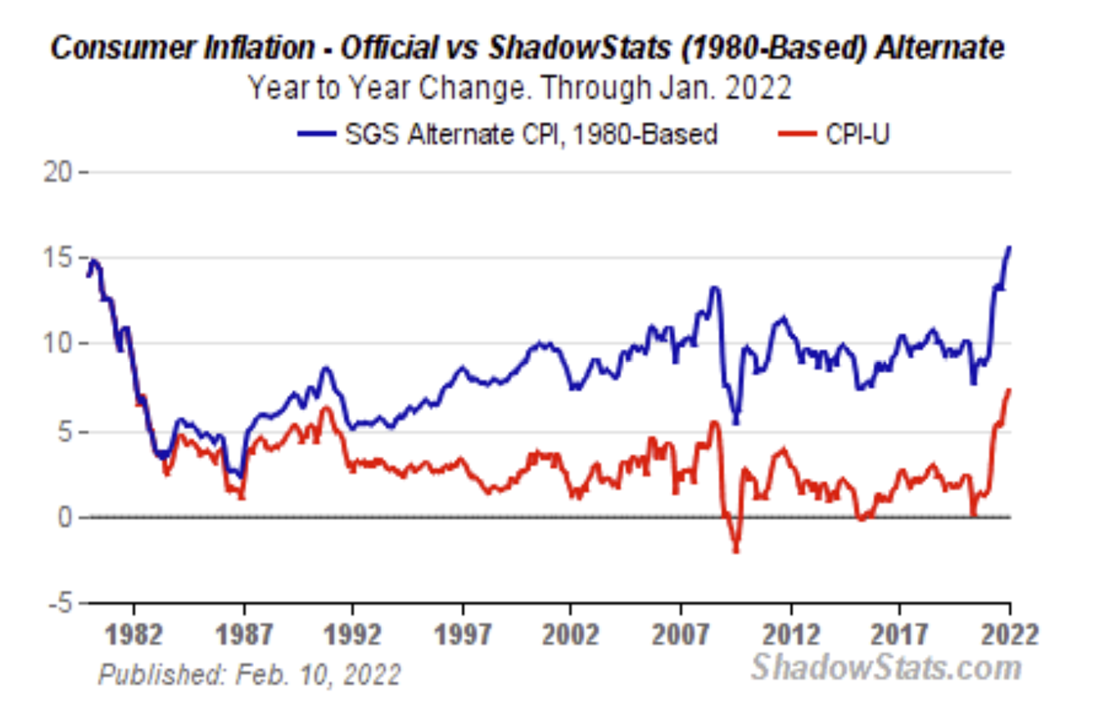 Of course, as I’ve discussed previously, this measure of inflation severely underreports the actual inflation rate.

This chart from economist, John Williams at www.ShadowStats.com illustrates the inflation rate if the 1980 calculation methodology is used.

Note that it is now at about 16% exceeding the level of inflation the country experienced in the early 1980’s when then-Federal Reserve Chair, Paul Volcker, increased interest rates to 20% in order to tame the inflation monster.

As I have stated, an extreme rise in interest rates by the Fed is not a viable option at the present time.  US Government debt, as I’ve discussed here, now exceeds $30 trillion.  To stop currency creation or significantly slow it, the government will need to operate without a large deficit.

Deficit reduction is not being discussed seriously at the present time.  Lack of concern with profligate spending means that currency creation in some form will have to continue despite the Fed’s taper talk which I chalk up to necessary rhetoric.

While price controls are not imminent at this time, a recent poll in the UK found that the majority of the voters there were in favor of price controls.  Sadly, most voters lack knowledge of history when it comes to price controls.

Price controls imposed in the United States after World War II led to empty store shelves and then government-supervised rationing of goods.  It was a complete and total disaster.

Recordings from Richard Nixon and Treasury Secretary John Connelly from the 1970’s make this point perfectly.  This from an article (Source:  https://www.econlib.org/archives/2016/12/nixons_wage_and.html) on the topic:

In late July, 1971, Nixon reiterated his adamant opposition to wage and price controls calling them a scheme to socialize America.  Yet, less than a month later, in a stunning reversal, he imposed the first and only peacetime wage and price controls in US history.  The Nixon tapes, personal tape recordings made during the presidency of Richard Nixon, provide a unique body of evidence to investigate the motivations for Nixon’s stunning reversal.  We uncover and report in this paper evidence that Nixon manipulated his New Economic Policy to help secure his reelection victory in 1972.

He became convinced that wage and price controls were necessary to grab the headlines away from the defeatist abandonment of the Bretton Woods Agreement and the closing of the US gold window.  Nixon understood the impact of his wage and price controls, but chose to trade off longer-term economic costs to the economy for his own short-term political gain.

Here are some excerpts with dates from the Nixon tapes.

Nixon [February 22, 1971]: ”Here’s my concern about the freeze…There is strong support for a wage board and wage-price controls and particularly from sources like Arthur Burns. … The difficulty with wage-price controls and a wage board as you well know is that the God-damned things will not work. They didn’t work even at the end of World War II. They will never work in peacetime.”

Nixon [July 24, 1971] refers to a program proposed by Connally and states that he wants to emphasize ”making America competitive again.”

Connally [August 12, 1971]: ”To the average person in this country this wage and price freeze–to him means you mean business. You’re gonna stop this inflation. You’re gonna try to get control of this economy. …If you take all of these actions…you’re not going to have anybody…left out to be critical of you.”

While Nixon was initially reluctant to accept the wage and price freeze, he soon turned into an enthusiastic supporter: ”As a matter of fact, I’d like the freeze on right through the election.” He worried that the goal of a 2-3 % inflation rate by the end of 1972 would not be achieved, but the design for the program was such that Nixon could plausibly deny responsibility for any failure.

While it remains to be seen if price controls are implemented, it seems certain that inflation will continue until the deflationary reset occurs.

As I noted last week, the question is when the deflationary asset repricing reset occurs.  Will it be soon, or will the Fed inflate another bubble first?

As I have been suggesting, the best course of action is to hedge for both inflation and deflation using the Revenue Sourcing™ planning strategy.

This week’s radio program and podcast is a ‘best of’ broadcast featuring an interview with technical analyst Dr. Robert McHugh.

Dr. McHugh discusses his forecast for stocks, bonds, the US Dollar, gold, and silver.

Bob and I also discuss the role cryptocurrencies may play in the future.

It’s a terrific interview as Bob offers his insights and forecasts.  You can listen now by clicking on the "podcast" tab at the top of this page.

“I hear that whenever someone in the White House tells a lie, Nixon gets a royalty.”