With only the exception of the US Dollar, every market we analyze here in “Portfolio Watch” was negative last week.

By our technical measure, stocks remain in an uptrend although it’s difficult to justify current valuations from a fundamental perspective.  Gold and silver, as we noted last week are in downtrends although the fundamentals are still very bullish for precious metals. 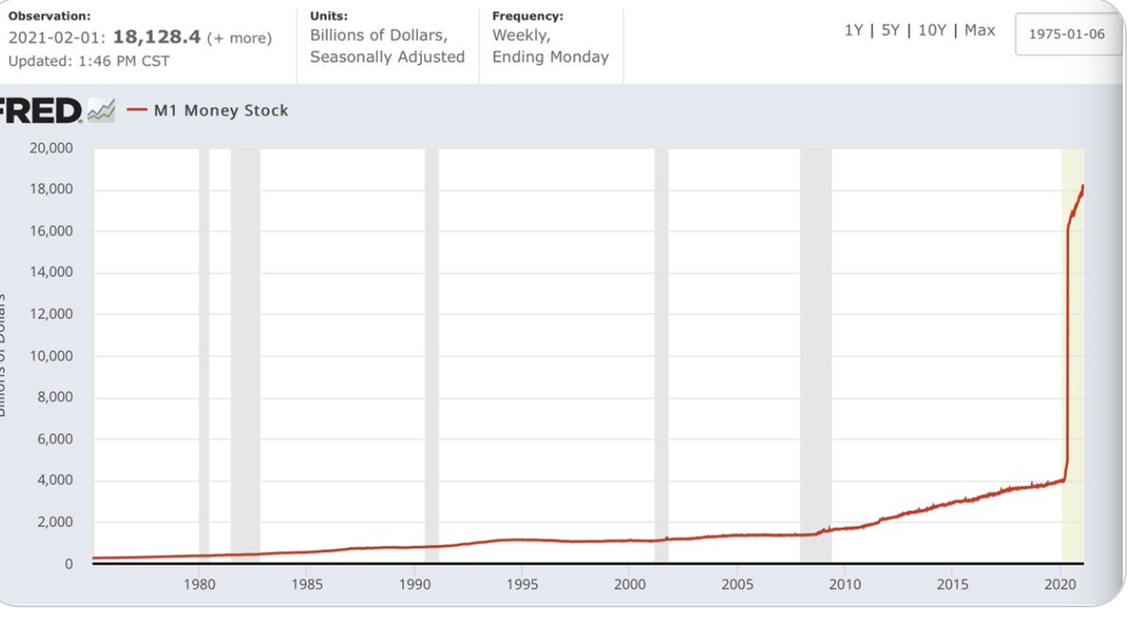 One reason we are bullish on metals moving ahead is the expansion of the fiat money supply.  The chart on this page, from the Federal Reserve and tweeted by Sven Henrich, shows that in the last year, by the Fed’s own accounting, the M-1 money supply increased more than $14 trillion!

Notice the increase over the past 12 months; the trajectory of the money supply, when plotted on a graph, is completely vertical.

While this chart tells you everything you need to know about the money supply currently, this massive and rapid expansion of the money supply, is poised to continue at this same pace.

Earlier this month the US Treasury released its plan to flood the financial system with cash by reducing its balance on its general account at the Fed by $1.229 trillion by not renewing an equivalent amount of T-Bills.

Separately, the Fed will continue with its QE at the rate of $120bn every month, which combined with the Treasury’s plans means an inflation of the money supply totalling $1.829 trillion [(120x5 months)+929+300] is in progress from the beginning of this month until end-June. This does not include the planned stimulus of $1.9 trillion.

The banks do not have the balance sheet capacity to take this expansion on board, and if they are forced to turn new depositors away it will almost certainly be by charging for deposits (imposing negative interest rates). That being the case, not only will the US economy be flooded with unprecedented levels of inflated money, but commercial banks will implement negative rates without the Fed having to do so.

Just when you thought monetary policy couldn’t get crazier, it seems it’s about to get crazier.  We may about to see negative interest rates in the US and England, two areas of the world that have not yet seen this lunacy.

In my view, this development, should it occur, will make the case for many investors increasing their holdings of precious metals.  One of the main arguments against owning metals is that there is no yield.  That argument is about to be turned on its head should negative interest rates become reality.  Not only are metals a good inflation hedge but no yield on metals will be more attractive than a negative yield on bank deposits.

For a long time, I have long contended that there are only two economic outcomes possible; one, deflation.  Or two, inflation followed by deflation.

Arguably, we are now seeing inflation.

Past radio program guest, John Williams of Shadowstats.com tracks economic data using the methods that were previously used by the government.  As many of our readers know, as time has passed, the reporting data has changed to make the reported data look more favorable. 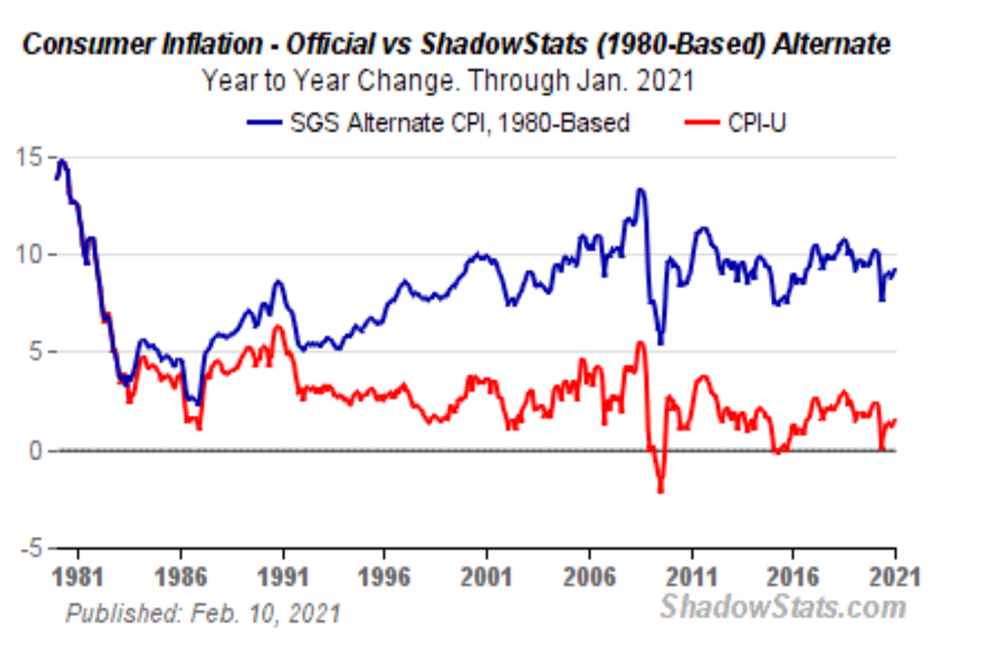 This chart, republished here from www.Shadowstats.com, shows that using the reporting methods that were used prior to 1980, the current, real inflation rate is approaching 10%.  Arguably, that is close to 1970’s level inflation.

The question is this, how long can inflation continue before the bubble bursts and deflation sets in?

That is the question that is impossible to answer.

Could we see hyperinflation before the deflation sets in?

It’s a definite possibility given the Fed’s current policy stance.

For now, it seems that we are still headed for more inflation but a quick and severe stock market correction could change that course at any time.

In response to a question posed by Congressman Warren Davidson about whether “M2 [money supply] going up by 25% in one year” is going to “diminish the value of the U.S. dollar,” Powell responded, “there was a time when monetary policy aggregates were important determinants of inflation and that has not been the case for a long time.”

Powell added that “the correlation between different aggregates [like] M2 and inflation is just very, very low.

“There was a time that money creation caused inflation but that’s not the case presently.  The amount of money printed and the rate of inflation are not closely correlated.”

So, it used to be that money printing increased the rate of inflation but, according to the Fed Chairman, that is no longer the case?

Have the basic rules of economics changed?

Have the laws of supply and demand changed?  Does an abundance of something (including money) make that something more valuable?

Obviously, the basic rules of economics have not changed.

Scarcity creates value and abundance does exactly the opposite.

Only the way the inflation rate is calculated.

I have often used the following illustration to make this point.

I like to go fishing in Florida.  One of my favorite species of fish to catch requires that it be 12 inches in length in order to keep it.  When fishing, it’s easy to figure out if the fish is a ‘keeper’ or not by taking an ordinary 12-inch ruler and holding it next to the fish.

If I decide to cut my ruler in half and recalibrate the numbers so there are 12 inches on the ruler, I still have a ruler that says it’s a 12-inch ruler but it's half as long as the ruler I used on my prior fishing trips.

Am I a better fisherman?

No.  But I changed the measuring stick so I can now keep more fish.  Reality hasn’t changed, only the way I measure it.

That’s the game the Fed is playing.  Reality hasn’t changed but the way it's measured has.

The radio program this week features an interview with Karl Deninger.  We get his take on this inflation and deflation argument and also on the future of healthcare.  It’s a very thought-provoking interview now available on the app and the website.

The app is the “YourRLA” app and is available at the app store.  Just search “YourRLA” and download the app for free.

“All that is necessary for the triumph of evil is that good men do nothing.”