Stocks, for the most part, finished the week higher after a big rally day on Friday.  By my measure, bonds remain in a bear market.

As a reminder, there is the last opportunity to request the February Special Report titled, “Stock Update:  Is the Crash Upon Us?”.  Visit www.RequestYourReport.com to request the report for yourself or someone else.

With the Russian invasion of Ukraine, the Federal Reserve may now slow the taper.  As noted in an article this past week by Lance Roberts, it would not be the first time the Fed used geopolitical risk to reverse or soften monetary policy.

Setting the news of the invasion aside for a moment, the Fed’s taper talk wasn’t going to do much to quell inflation anyway with the most aggressive Federal Reserve Board members calling for a 1% rate hike by July 1.

As I’ve discussed, it’s my view that inflation cannot be contained unless real interest rates turn positive and we are a long way from that.

In his article (Source:  https://realinvestmentadvice.com/geopolitical-risk-could-sideline-the-fed/), Mr. Roberts quotes “The Wall Street Journal” from 2016:

Mr. Roberts then points out what the Fed did in 2018, reversing its monetary tightening policy as markets reacted unfavorably.

In 2018, the Fed was hiking rates and tapering their balance sheet. Then, with the market under duress, rising geopolitical risks with China began to soften the Fed’s more hawkish stance. Not long after, the Fed started cutting rates and bailed out hedge funds through an “unofficial QE” program. That was all before the 2020 “pandemic-shutdown” bailout of everything.

While the consensus after the Fed’s emergency meeting on February 14 was that the Fed would raise interest rates at the March meeting, I was skeptical and remain so.  Now with geopolitical tensions rising, it seems less likely that the Fed will take the modest action regarding interest rates it was contemplating. 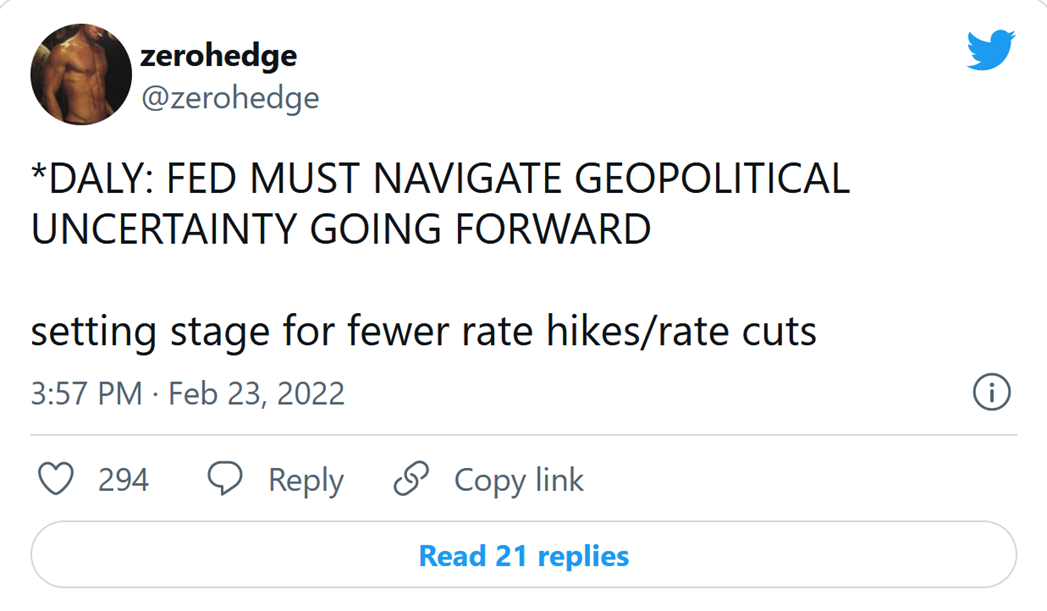 As Mr. Roberts points out in his article, geopolitical risks are not the only issue that the Fed faces.

While the Fed suggests it will hike rates at its March meeting to combat current inflation, they face several challenges from falling consumer confidence, weak markets, and very bearish investor confidence.

Financial markets are jittery, to say the least, the broad stock market using most any valuation measure remains extremely overvalued and investors are now more bearish than at any time since 2016. 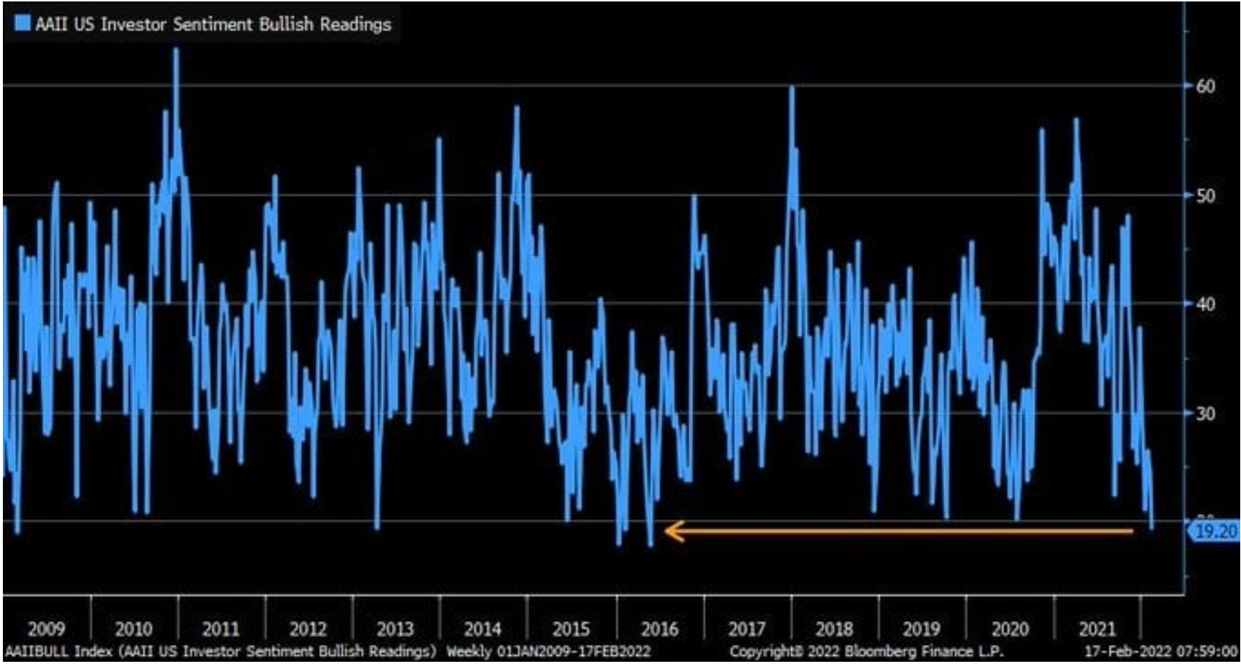 This chart illustrates the level of bullishness among investors.  Notice from the chart that investors haven’t been this bearish since 2016.

In the U.S., consumers drive 70% of economic growth. Such is why “price stability” is so crucial to the Fed.

To understand why confidence is so vital, we need to revisit what Ben Bernanke said in 2010 as he launched the second round of QE:

The problem is the economy is no longer a “productive” one but rather a “financial” one. A point made by Ellen Brown previously:

“The financialized economy – including stocks, corporate bonds and real estate – is now booming. Meanwhile, the bulk of the population struggles to meet daily expenses. The world’s 500 richest people got $12 trillion richer in 2019, while 45% of Americans have no savings, and nearly 70% could not come up with $1,000 in an emergency without borrowing.

Central bank policies intended to boost the real economy have had the effect only of boosting the financial economy. The policies’ stated purpose is to increase spending by increasing lending by banks, which are supposed to be the vehicles for liquidity to flow from the financial to the real economy. But this transmission mechanism isn’t working, because consumers are tapped out.”

If consumption retrenches, so does the economy.

The problem for the Fed is that consumer confidence is already declining, tightening monetary policy will exacerbate the decline.

Ellen Brown, a past guest on my radio program, has it right.  Fed policy has widened the wealth gap; the wealthy have become wealthier while low-income earners have struggled more. 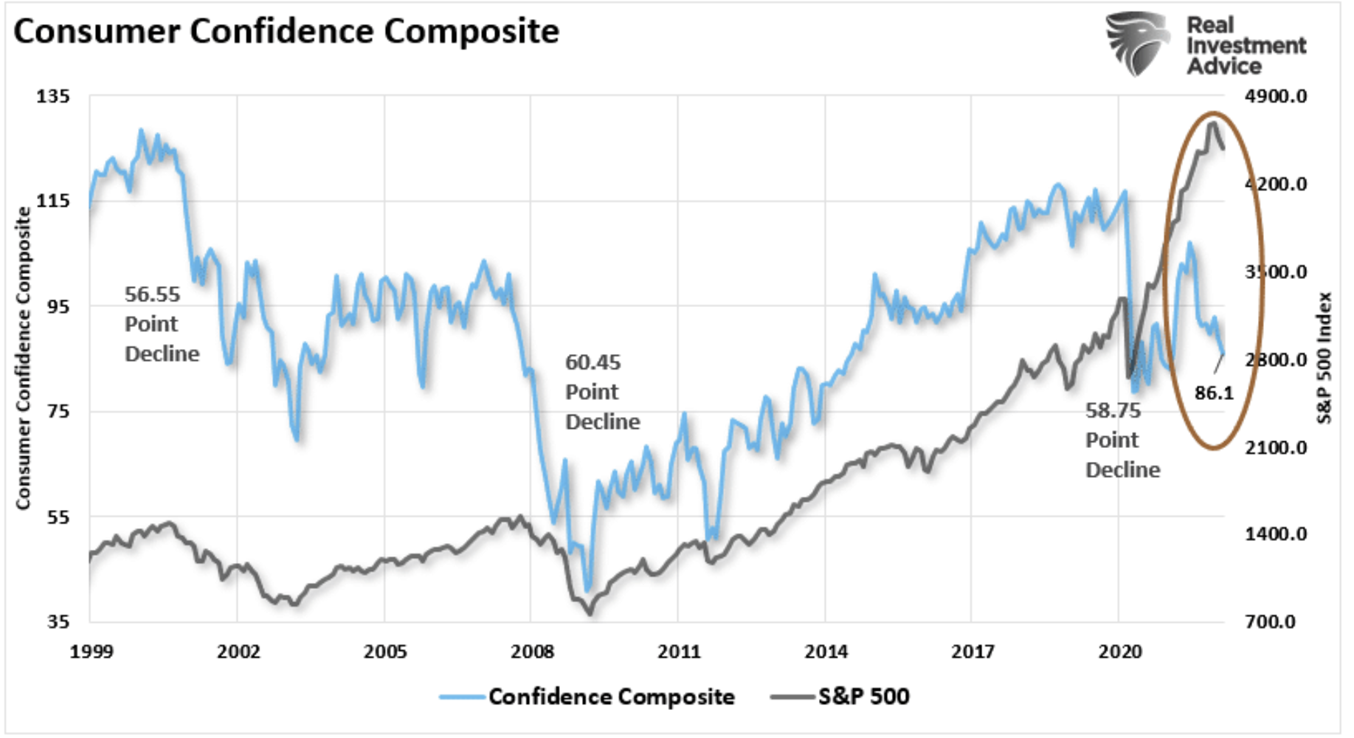 It’s interesting when looking at the chart that consumer confidence is now lagging almost to the level at the height of the lockdowns.

In my view, the Fed is trapped.  The Fed has two choices, continue to create currency and keep interest rates low and risk a hyperinflationary outcome.  Or tighten and risk recession, or worse.

As I have discussed in “Portfolio Watch”, in the monthly “You May Not Know Report”, and during the weekly “Headline Roundup” webinars, it is my view that where we are headed economically is extremely predictable.  We will have inflation followed by deflation.

Stated another way, we will have inflation followed by recession.

As I have also asserted, the ‘what’ is far easier to predict than the ‘when’.  That’s why I suggest the Revenue Sourcing™ approach to managing retirement assets.

If you are not participating in the weekly “Headline Roundup” webinars, they happen live each Monday at Noon Eastern time.  Feel free to give the office a call at 1-866-921-3613 to get an e-mail link to the weekly broadcast.

This week’s radio program and podcast features an interview with Simon Popple, publisher of the “Brookville Capital Intelligence Report”.

I chat with Simon about his views on inflation and how to invest to potentially protect yourself.  You can listen to the program now by clicking on the "Podcast" tab at the top of this page.

“I didn’t attend the funeral.  But, I sent a nice letter saying I approved of it.”