Cryptocurrencies are making headlines of late.

I’ve also had many questions from clients, radio and podcast listeners, and webinar participants about the advisability of storing wealth in cryptocurrencies.  In this week’s “Portfolio Watch”, I will address this topic albeit briefly due to space limitations.

For those of you unfamiliar with cryptocurrencies, they are digital currencies that use blockchain technology.

Let’s break that down.  Digital simply means that these currencies exist online; they are not physical nor are they typically backed by anything physical.

Blockchain technology is best described as a time-stamped, unalterable series of data managed by a cluster of computers not owned by any single entity or person.  Each of these blocks of data is linked together using cryptographic principles (chain).

The blockchain network has no central authority; it is a democratized system.  It is a shared and unalterable ledger, the information is open and available for anyone to see.  On the blockchain, everything is very transparent.

To help understand blockchain, think about it this way, blockchain is a spreadsheet that is duplicated thousands of times across a network of computers. Then imagine that this network is designed to regularly update this spreadsheet and you have a basic understanding of the blockchain.

Information held on a blockchain exists as a shared — and continually reconciled — database. This is a way of using the network that has obvious benefits. The blockchain database isn’t stored in any single location, meaning the records it keeps are truly public and easily verifiable. No centralized version of this information exists for a hacker to corrupt. Hosted by millions of computers simultaneously, its data is accessible to anyone on the internet. 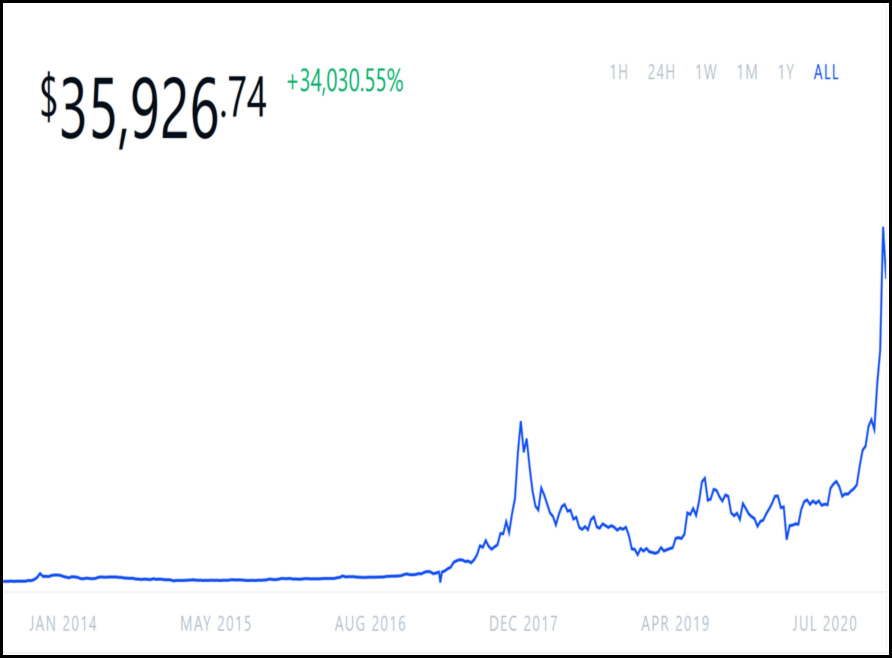 I believe the popularity and extreme price movement in Bitcoin demonstrates that the population is actively and intensely seeking an alternative to fiat currency when it comes to storing and protecting wealth.  The chart on this page shows the historical price of one Bitcoin.

A little more than 3 years ago, in the November 2017 issue of my client newsletter, I offered my opinion on Bitcoin.  At that time, Bitcoin had nearly quadrupled from $2,500 to nearly $10,000.

Often, as time passes and more research is conducted, an opinion can change, or, at the very least be somewhat modified.  Despite the passage of time and conducting more research relating to Bitcoin, my opinion today remains the same as my opinion in November of 2017.

I view Bitcoin as a speculative investment with no intrinsic value that will never be fully embraced as a currency.  I view nearly every other major cryptocurrency the same way.

There are three reasons for this opinion.

Reason One:  Cryptocurrencies don’t solve all the problems inherent to fiat currencies.

As noted above, although there may be a stated limit on the amount of a cryptocurrency like Bitcoin that may be created, on a very fundamental level, cryptocurrencies are really just another fiat currency.

That means they have no real value just like a fiat currency.

It was Voltaire who said that all fiat currencies eventually return to their intrinsic value.  I believe that there is a good chance that will ultimately be true for most cryptocurrencies too especially if there is a proactive reset at some future point that has currency, even a digital currency developed that would be backed by something tangible.

Reason Two:  Cryptocurrencies have become too speculative to be used as an everyday currency.

Currency that is used to buy and sell things needs to be stable.

If you are selling something to someone, don’t you want to ensure that the form of payment you receive has value that is relatively stable?

Would you want to sell someone a $20,000 car today taking cryptocurrency as payment knowing that there is a real risk that the $20,000 you received for the car sale might only be worth $15,000 the very next day?

That’s why, at this point in time, cryptocurrencies are a speculative investment vehicle rather than a viable alternative currency.

When you consider what motivates someone to buy Bitcoin or another cryptocurrency, it’s speculation, not an intent to use the Bitcoin in commerce at some future point.

Reason Three:  When one reviews the chart above, it’s fairly obvious that Bitcoin is in a bubble.

Like the bubble that existed in Bitcoin 3 years ago that ultimately burst, this one will probably burst too.

It’s no secret that fiat currencies are being severely devalued and citizens are looking for alternate stores of value.  Despite the allure and novelty of fiat currencies to protect against currency devaluation, I expect that more tangible assets will ultimately prove to be the best way to protect and preserve purchasing power.

When observing the behavior of one of the world’s richest men, this conclusion seems to be validated.  Bill Gates is now the largest holder of farmland in the United States according to “Forbes” although other individuals own more land, just not farmland.  This from “Summit News”  (Source:  https://summit.news/2021/01/15/bill-gates-buying-up-huge-amount-of-farmland-while-great-reset-tells-americans-future-is-no-private-property/) (emphasis added):

Indeed, Gates is now the biggest owner of farmland in America, according to a Forbes report.

“After years of reports that he was purchasing agricultural land in places like Florida and Washington, The Land Report revealed that Gates, who has a net worth of nearly $121 billion according to Forbes, has built up a massive farmland portfolio spanning 18 states.”

According to Forbes, it is not known what Gates is doing with the land and Cascade Investments refused to comment on the issue.

Amazon’s Jeff Bezos is also “investing in land on a large scale,” according to the report.

Other billionaires are investing in gold (Source:  http://alternativeinvestmentcoach.com/4-billionaires-buying-gold/)

Billionaires Ray Dalio, John Paulson, David Einhorn, and Stanley Druckenmiller are all buying gold and publicly stating they are doing so.

I would make the point that Gates, Malone, Turner, Bezos, Dalio, Paulson, Einhorn and Druckenmiller are all storing wealth in tangible assets.

If you are tempted to buy cryptocurrencies other than for speculation, I would resist the temptation and follow the lead of these billionaires with the assets you are using to protect yourself from inflation.

Thank you all for your continued support and referrals.  If you are not participating on our weekly Monday update webinars, you can get more information on them at www.RetirementLifestyleAdvocates.com or catch the replays there.

If you need more information about the webinars or would like to schedule a phone conversation to discuss precious metals or tax planning, just give the office a call at 1-866-921-3613.

This week’s radio program is a terrific interview with Simon Popple of Brookville Capital.

The interview is available at www.RetirementLifestyleAdvocates.com.

“He who laughs last thinks slowest.”