The double top theory for stocks that I called at the end of 2021 and have been discussing this month still looks intact despite a bit of a rally in stocks last week.

There was a lot of volatility in stock markets last week and a week-end rally propelled stocks into positive territory for the week.

The big news last week was the Federal Reserve’s meeting.  This from MSN about how investors may view the Fed’s post-meeting statement: (Source:  https://www.msn.com/en-us/money/markets/what-to-expect-from-markets-in-the-next-six-weeks-before-the-federal-reserve-revamps-its-easy-money-stance/ar-AAThaoB)

Federal Reserve Chairman Jerome Powell fired a warning shot across Wall Street last week, telling investors the time has come for financial markets to stand on their own feet, while he works to tame inflation.

The policy update last Wednesday laid the groundwork for the first benchmark interest rate hike since 2018, probably in mid-March, and the eventual end of the central bank’s easy-money stance two years since the onset of the pandemic.

The problem is that the Fed strategy also gave investors about six weeks to brood over how sharply interest rates could climb in 2022, and how dramatically its balance sheet might shrink, as the Fed pulls levers to cool inflation which is at levels last seen in the early 1980s.

Instead of soothing market jitters, the wait-and-see approach has Wall Street’s “fear gauge,” the Cboe Volatility Index up a record 73% in the first 19 trading days of the year, according to Dow Jones Market Data Average, based on all available data going back to 1990.

Even with a sharp rally late Friday, the interest-rate-sensitive Nasdaq Composite Index remained in correction territory, defined as a fall of at least 10% from its most recent record close. Worse, the Russell 2000 index of small-capitalization stocks is in a bear market, down at least 20% from its Nov. 8 peak.

“Valuations across all asset classes were stretched,” said John McClain, portfolio manager for high yield and corporate credit strategies at Brandywine Global Investment Management. “That’s why there has been nowhere to hide.”

The Fed announced after its two-day meeting that rates hikes would likely begin in March and would end its quantitative easing program at about the same time.  The Fed noted that it is considering how quickly to end that program.

I find it curious that despite near-record inflation, the Fed opted to wait a month before taking any action.  Seems that if subduing inflation was the goal, action sooner rather than action later would be warranted.

As I’ve discussed in past issues of “Portfolio Watch” and on the weekly “Headline Roundup” webinar update that is broadcast live each Monday at Noon Eastern, I believe it will be difficult for the Fed to end its quantitative easing program.

There are many reasons I have reached this conclusion.  Let me cover a couple of them with you.

First, via member banks the Fed is helping the government cover its massive level of deficit spending.  Since the spending by the Washington politicians is totally out of control, this will be a difficult thing for the Fed to get done.

Second, in my view, the economy isn’t strong enough to handle monetary tightening.  Should the Fed follow through with its latest policy statement, I believe the economy and the financial markets will quickly and negatively react.  Arguably, they have already begun to react adversely.

Every week, I read articles that tout the economic recovery.  Most of these are published by media with an agenda in my view which has now sadly become the norm.  I believe these stories to be more rhetoric than fact.

Nothing says "BTFD in stocks" like collapsing sentiment (UMich 10 year lows this morning) and crashing growth expectations and no lesser entity than The Atlanta Fed just released its latest GDPNOW forecast for Q1 economic growth in the US... and it's a doozy.

US macro data has been disappointing recently... 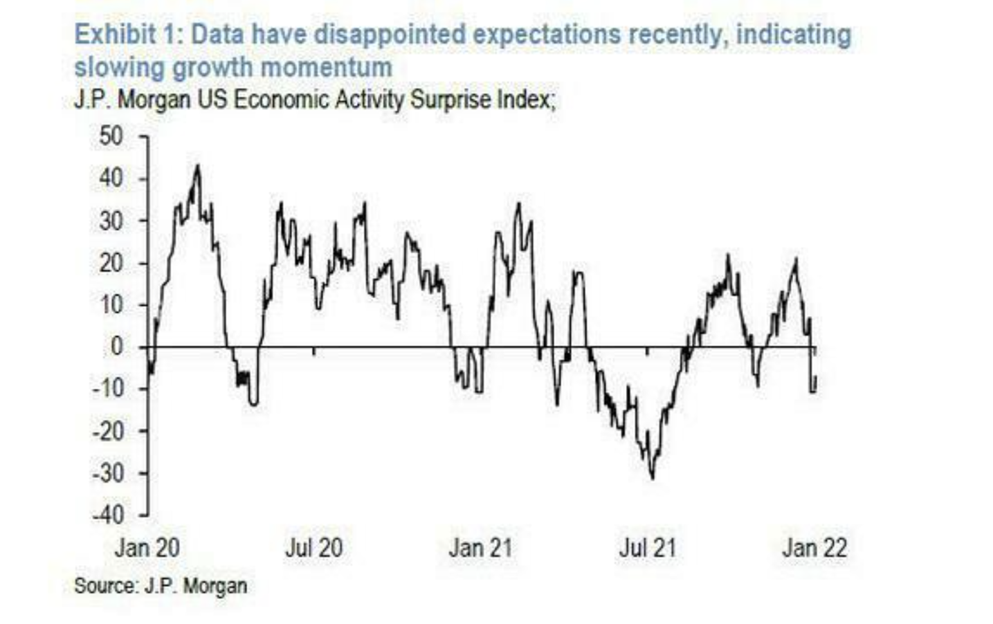 All of which have sent the initial GDPNow model estimate for real GDP growth (seasonally adjusted annual rate) in the first quarter of 2022 to just 0.1 percent on January 28, i.e. on the verge of contraction.

The chart on the right illustrates the GDPNow model.  Note that it is at the zero line indicating the Atlanta Fed’s research has the economy on the verge of recession.

The Atlanta Fed is not alone in this opinion.

This from another “Zero Hedge” piece (Source:  https://www.zerohedge.com/markets/recession-deck-bofa-slashes-gdp-forecast-sees-significant-risk-negative-growth-quarter)

Which brings us to the current Wall Street landscape where some banks, most notably the likes of Goldman, continue to predict even more rate hikes while ignoring the risk of a slowdown, its entire bullish economic outlook for 2022 predicated on households spending "excess savings" which they have spent a long time ago (expect a huge downgrade to GDP in 2022 from Goldman in the next few weeks as the bank realizes this), while on the other hand we have banks like JPMorgan, which recently pivoted to the new narrative, and as we reported last weekend, now sees a sharp slowdown in the US economy following a series of disappointing data recently... 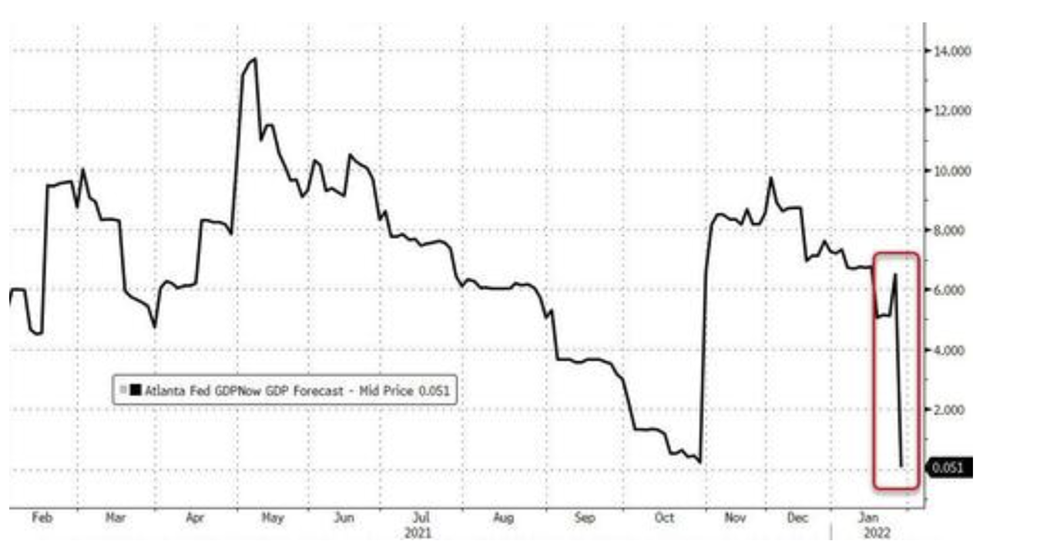 And while not yet a recession, today Bank of America stunned the market when its chief economist joined JPM in slashing his GDP for 2022, and especially for Q1 where his forecast has collapsed from 4.0% previously to just 1.0%, a number which we are confident will drop to zero and soon negative if the slide in stocks accelerates due to the impact financial conditions and the (lack of) wealth effect have on the broader economy.

For a long time, I have been discussing my belief that the economy and the markets were artificial and a day of reckoning would have to come.

That day of reckoning would be inflation followed by deflation.

We are now in the inflation part of that pattern, headed at some future point for deflation.

The question is how out-of-control will inflation get before we see deflation that is likely to be on par with the deflation of the 1930’s.

The answer to that question, in my view, depends entirely on Fed policy.

I remain skeptical that the Fed will follow through completely with its rather vague promise to tighten monetary policy.

The best course of action is to hedge for both inflation and deflation using the Revenue Sourcing™ planning strategy.

This week’s radio program and podcast features an interview with economist John Williams of ShadowStats.com.

John’s organization tracks the inflation rate using the methods that were used in the past before the inflation calculation methods changed to make the reported data appear more favorable. John explains why the current, actual inflation rate is near 15% and also offers a forecast for inflation in the near future.

“Advertisements – contain the only truths to be relied on in a newspaper.”