Metals continued their slide last week as stocks rallied, US Treasuries fell slightly, and the US Dollar Index rose.

Last week, here in “Portfolio Watch”, I made the case that my January recession call was the correct one.  The most recent revisions to GDP indicate negative growth in the first quarter of the year likely to be followed by negative growth during the second quarter as well.

In my view, the reality of the current economic situation no matter what the week-to-week market numbers might say is that there is too much debt in both the private sector and on the public balance sheet to ever be paid with ‘honest’ money.

That means the outcome we are likely to see today will be worse than in the 1930s.  Former Presidential Candidate, Ron Paul (also a past guest on the RLA Radio program had this to say on the topic (Source:  https://www.breitbart.com/clips/2022/07/05/ron-paul-what-were-facing-today-a-lot-worse-than-the-depression-recent-downturns/)

Tuesday, during an appearance on Newsmax TV’s “American Agenda,” former Rep. Ron Paul (R-TX) warned the country was worse off than it had been in some of the most challenging economic times in its history, including the Great Depression of the last century.

Paul decried the economic policies of inflating the money supply and the U.S. debt as the causes.)

“[T]he founders understood exactly what we’re talking about,” he said. “They had the runaway inflation with the Continental Dollar. So they put in the Constitution that only gold and silver could be legal tender. And if we had followed that, we wouldn’t have had the welfare-warfare state with these huge deficits and what we’re facing because I think what we’re facing today is a lot worse than what we’ve had in the past, whether it was the Depression or whether it was the downturns we’ve had in recent years.”

But things are changing and changing quickly.  Debt is a drag on the economy as is becoming ever apparent.  Matthew Piepenburg had this to say on the topic (Source:  https://goldswitzerland.com/the-u-s-just-another-inflation-seeking-banana-republic/)

What the U.S. in particular, and the West in general, are failing to confess is that today’s so-called “Developed Economies” are in actual fact more like yesterday’s debt-straddled Emerging Market economies, and like a real banana republic, the only option ahead for our clueless elites is inflationary (and intentionally so).

I’ve often cryptically joked that listening to investors, mainstream financial pundits or downstream politicians debating about near-term asset class direction, inflation “management” or central bank miracle solutions is like listening to First Class passengers on the Titanic debating about dessert choices on the menu in their hands rather than the debt iceberg off their bow.

In short: The real issues are right in front of us, yet ignored until the economic ship is already dipping beneath the waves. 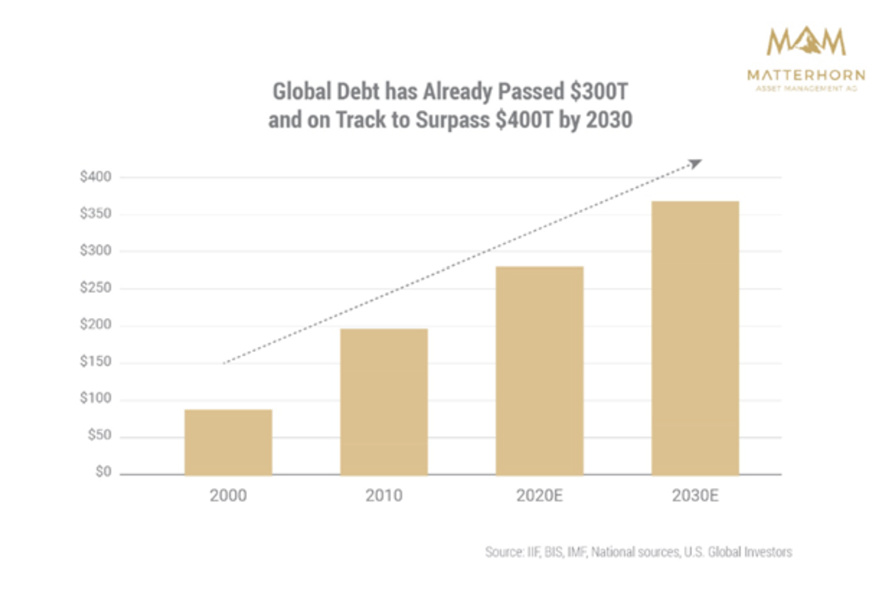 As for such hard facts (i.e., icebergs), the most obvious are fatal global and national debt levels rising at levels which can never be repaid….

Meanwhile, national income from GDP and tax receipts are falling, which means debts are grossly outpacing revenues, which any kitchen table, boardroom, or even cabinet meeting conversation should know is a bad thing…

Toward this end, it’s worth lifting our eyes above the A-deck menu and taking a hard look at the following iceberg scrapping the bow, namely: Tanking US tax receipts: 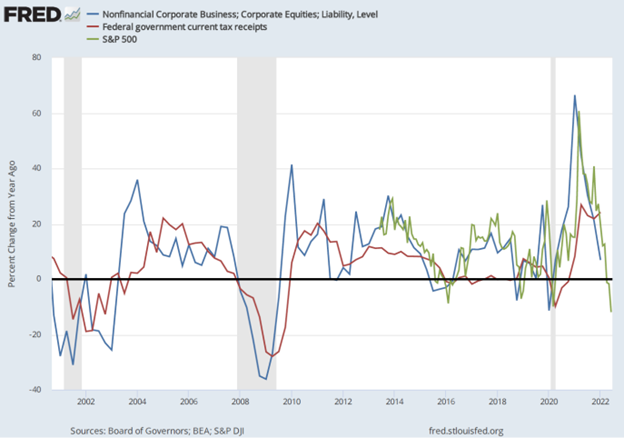 What Biden and Powell might wish to remind themselves is that U.S. tax receipts have fallen YoY by 16%, and are likely to fall even further as markets continue their trend South at the same time the US steers toward a recessionary block of ice.

China’s interest in U.S. Treasuries, for example, has hit a 12-year low, and Japan, as I’ve warned elsewhere, is too broke (and too busy buying its own JGBs with mouse-klick Yen) to afford to bail out Uncle Sam.

The level of magical Yen creation (reminiscent of the Weimar era) coming out of Japan to “support” its pathetic bond market is simply mind-blowing:

Given the artificial and relative current strength of the USD and the fact that FX-hedged UST yields are negative in EUR, it’s fairly safe to conclude that there will be more sellers than buyers of USTs. That means rising yields and rates near-term.

That’s a bad sign for Uncle Sam’s bloated and unloved bar tab. Who but the Fed (and hence more QE) will buy his IOUs by end of August?

In the past, the spread between rising debts and declining faith in U.S. IOUs was filled by a magical money printer at the not-so-federal “Federal” Reserve.

But with a cornered Fed still tilting toward QT rather than QE, where will this magical money come from, as it sure as heck ain't coming from tax receipts, the Japanese, China, or Europe?

As I see it, the Fed has only two pathetic options left if it wants to fill the widening gap between its growing deficits and declining faith from foreign bond buyers (or even US banks, see below).

Namely: It can 1) default on its embarrassing IOUs and send markets over a cliff, or 2) pivot from QT to QE and create more magical (i.e., inflationary and toxic) money.

As I have been stating from day one, I believe the Fed will pivot; it will reverse course and begin currency creation once again.  That will likely be bullish for metals as well as commodities as the US Dollar is devalued even further.

This week’s radio program and podcast features an interview with Dr. Peter Jacobsen.  I chat with Dr. Jacobsen about media censorship.

I found this conversation to be incredibly thought-provoking and I would encourage you to listen too by clicking on the "Podcast" tab at the top of this page.

“I know a man who gave up smoking, drinking, sex, and rich food.  He was healthy right up to the day he killed himself.”