While doing my research this past week, I found an article published on “Bloomberg” that offered some great perspective on the amount of currency that has been created literally out of thin air since early in the calendar year 2020.

The article is titled, “A $9 Trillion Binge Turns Central Banks Into the Market’s Biggest Whales” (Source: https://www.bloomberg.com/graphics/2021-central-banks-binge/).  Here is an excerpt:

Since the start of the pandemic, central banks in the U.S., Europe, and Japan have been on a $9 trillion spending spree.

That binge has turned the U.S. Federal Reserve, the European Central Bank, and the Bank of Japan into the ultimate market whales, swelling their combined assets to $24 trillion. Now, talk is shifting to winding down the banks’ massive monetary stimulus and the challenge that presents for the economies they support.

To get some perspective on $24 trillion, the article published an interactive chart that allowed the reader to select companies from a list, and then the chart added together the market capitalization of each company until the total combined value of the companies totaled $24 trillion. 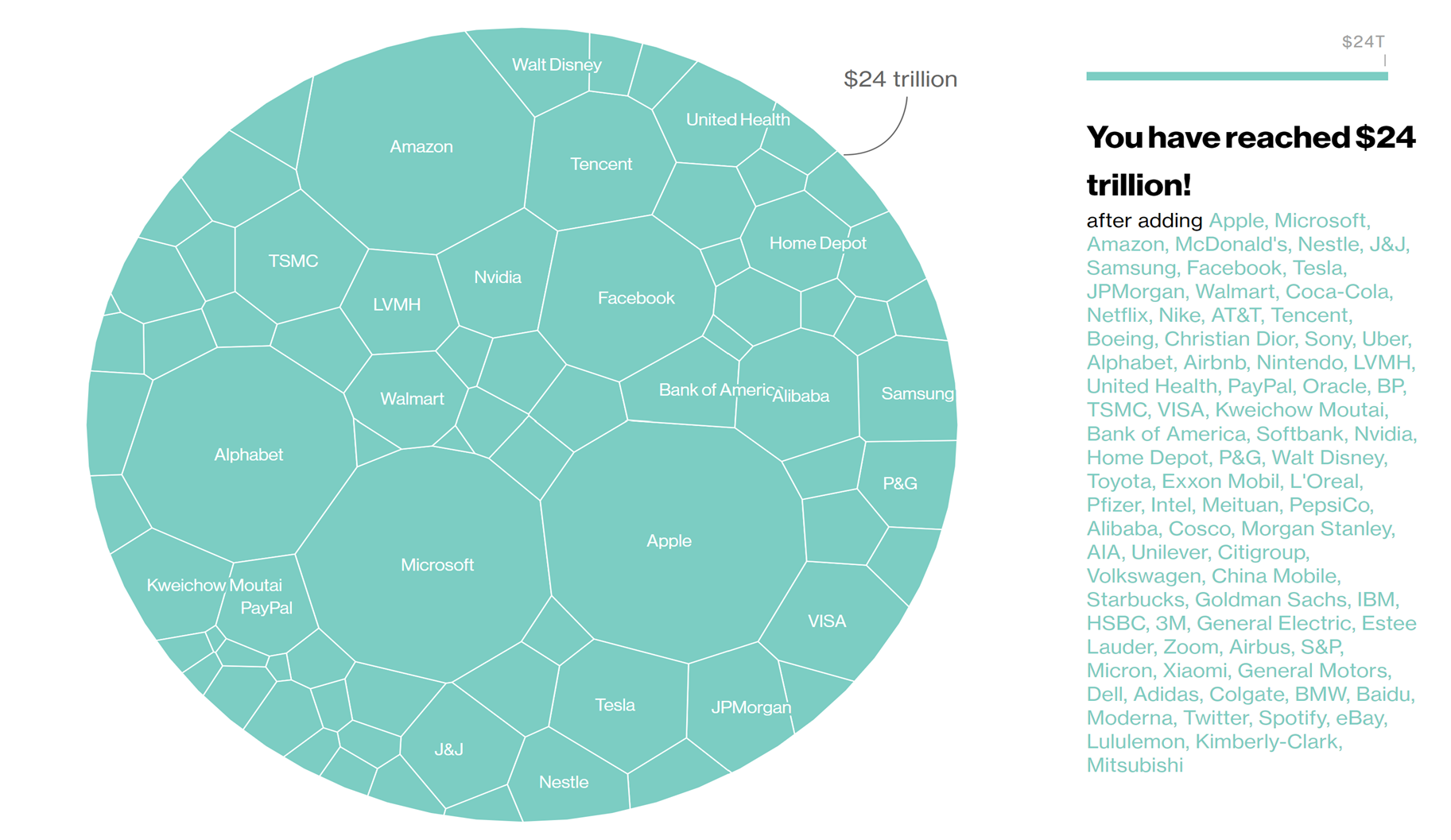 I’ve reproduced the chart that I built here.

It took 77 of the world’s largest companies to get the total combined value of the companies to $24 trillion!

These corporations are some of the largest in the world.  To reach a combined value of $24 trillion, these companies had to develop products and services that consumers desired and then build their businesses over time.

By contrast, the central banks of the United States, Europe, and Japan simply created $24 trillion.

As we all know, currency creation is simply out of control.  The article offers some comparisons:

The Fed bought a higher proportion of mortgage-backed securities than its counterparts, desperate to shore up a sector that caused so much trouble during the global financial crisis of 2008. In fact, it spent enough on these assets to buy more than a million homes in New York. Some Fed officials think that mortgage-backed securities are where spending should slow first.

The ECB and BOJ did more with loans, keeping businesses afloat, workers in jobs, and preventing bad debts from piling up at banks. Indeed, the Japanese central bank’s extra lending would cover the debts of every company that has gone out of business in the country since the autumn of 2003.

This currency creation, ostensibly to help those who were most adversely affected by the economic fallout that occurred as a result of the COVID response, actually ended up helping the wealthy more than any other group.  This from the article:

But it’s also clear that many asset classes such as technology stocks and real estate—and the people who own them—have fared better than the average worker over the past year or so. The Fed has the best data illustrating how the rich got richer and the poor slipped even further behind.

This chart was published in the article using data from the Federal Reserve. 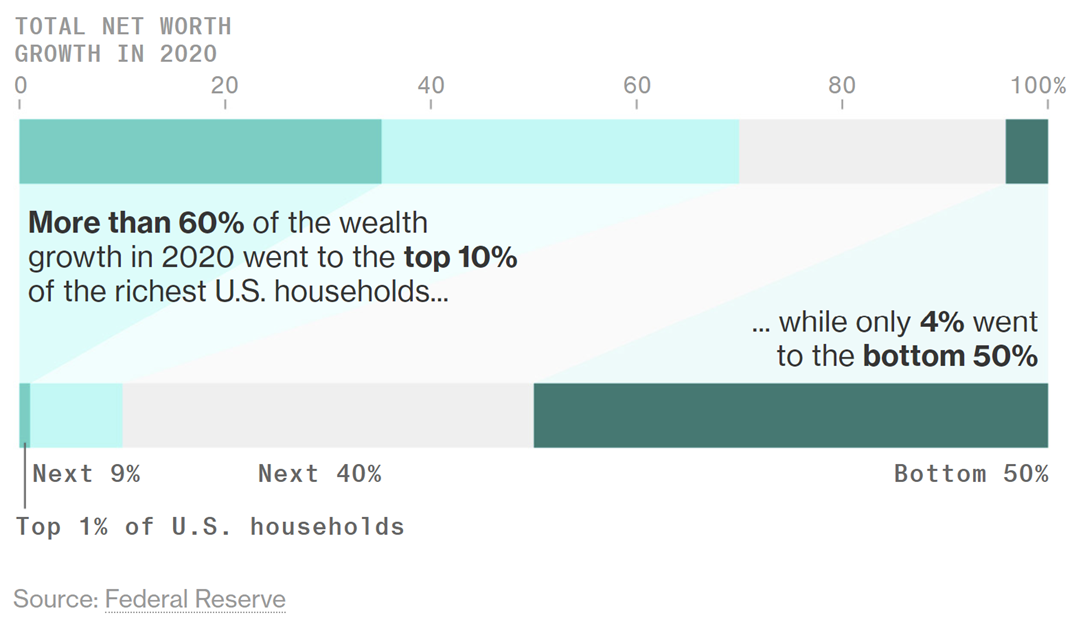 This validates a point that I have long made – currency creation in the name of helping the poor, actually ends up hurting the poor more than it helps them.

Eventually, inevitably, I believe these policies will hurt all Americans; however, the poor will likely continue to be disproportionately affected.

We have collectively ignored the sage advice given to us by one of the founding fathers, Thomas Jefferson who warned, “if the American people ever allow private banks to control the issue of their currency, first by inflation, then by deflation, the banks and corporations that will grow up around them will deprive the people of all property until their children wake up homeless on the continent their fathers conquered.  The issuing power should be taken from the banks and restored to the people, to whom it properly belongs.”

I’m releasing a revised and updated version of the “Revenue Sourcing” book published last year.  It’s title is “Retirement Roadmap: How Many Aspiring Retirees Can Use the Revenue Sourcing™ Process to Achieve a Secure, Tax-Free Retirement in Today’s Economy”.

One of the themes of the book is the difference between currency and money.  At some points historically money and currency have been the same thing, but presently our currency is not money.

While that may seem confusing on the surface, simply defined, money is a good store of value over time.  Currency, on the other hand, is what is used in commerce to buy and sell goods and services.

Once Nixon eliminated the convertibility of US Dollars for gold, all new currency was loaned into existence which transformed the US Dollar into a currency.  All currency today is a fiat currency which is nothing more than debt.

The US Dollar was once an asset but is now a debt-based currency as are all other world currencies.  The huge amount of money created by world central banks is now causing an acceleration of inflation as Mr. Jefferson predicted.  At some future point, inflation will have to give way to deflation as debts go unpaid and debt-based money disappears from the financial system.

The Chapwood Index measures inflation by examining the prices of 500 consumer items in the largest 50 metropolitan areas of the country.  You’ll want to tune in and hear Mr. Butowsky’s estimate of the real inflation rate.  You can listen to the show by clicking on the "Podcast" tab at the top of this page.

“I was a vegetarian until I started leaning toward the sunlight.”