During this week’s “Headline Roundup” newscast (broadcast live every Monday at noon, then posted at www.RetirementLifestyleAdvocates.com), I expounded on a trend I discussed previously.  That trend is that consumer spending is being increasingly funded by debt accumulation, primarily on credit cards.

This from “Zero Hedge” (Source:  https://www.zerohedge.com/markets/recession-imminent-spending-fueled-debt-savings-run-dry):

The US personal savings rate is near a five-year low as pandemic fiscal stimulus savings run dry.

But consumers are still spending with credit.

How long can consumers keep spending with revolving credit at the highest level in decades? 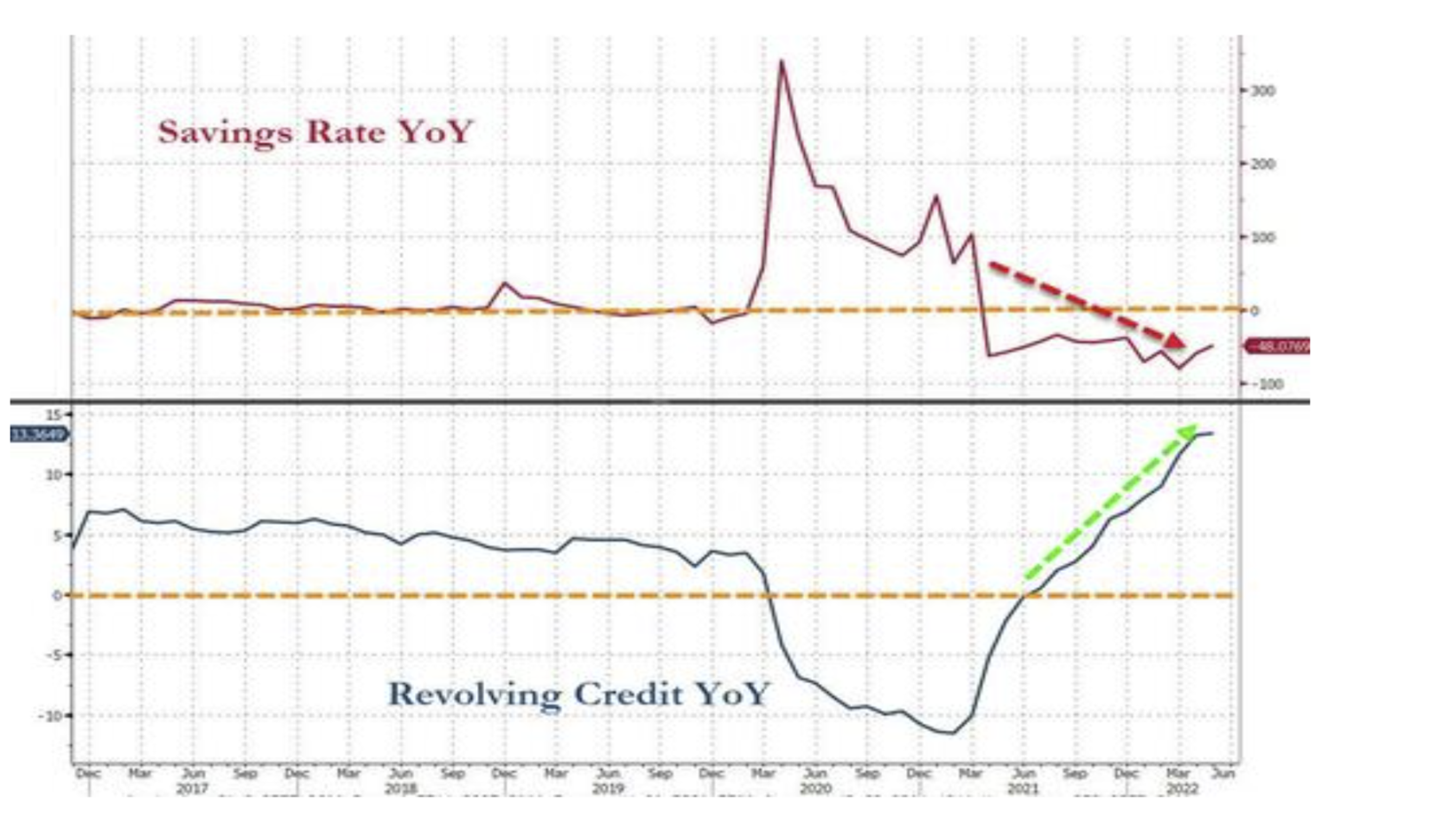 The risk is that equity markets have a lot more room to the downside.

The danger is that consumer spending, which drives some 70% of GDP, will soon be tapped out.

Lower spending, lower earnings with lower economic growth, while inflation is still running hot, will likely leave equities nowhere to go but down.

Consumers are tapped out, with many using credit cards to fund spending.

One has to realize that many of these consumers who are using credit cards to fund spending would rather not, they just don’t have any other choice as inflation continues to intensify.  This from “The Washington Examiner”  (Source:  https://www.washingtonexaminer.com/policy/economy/inflation-producer-index-june-near-highest-record)

Inflation, as measured by producer wholesale prices, ticked up to a red-hot 11.3% for the year ending in June, according to a report Thursday from the Bureau of Labor Statistics, near the highest on record.

Thursday’s report comes a day after headline inflation as measured by the consumer price index exploded to 9.1% for the 12 months ending in June, the highest level since 1981 and a bigger increase than expected.

The new producer price index numbers are just another indicator that prices are wildly out of control even as the Federal Reserve moves ever more aggressively to jack up interest rates to rein in the country’s historic inflation.

The PPI gauges the wholesale prices of goods, which are eventually passed down to consumers.

"Despite a modest improvement in supply conditions, price pressures will remain uncomfortable in the near term and bolster the Fed's resolve to prevent inflation from becoming entrenched in the economy," economists with Oxford Economics said.

The high rate of inflation has politically damaged President Joe Biden and undercut support for spending proposals from the White House and congressional Democrats.

Last month, the central bank hiked its interest rate target by a whopping three-fourths of a percentage point for the first time since 1994. The Fed typically raises rates by a quarter of a percentage point, or 25 basis points, so the June hike was analogous to three simultaneous rate increases.

The Fed is set to meet again later this month, and it will likely raise its rate target by another 75 basis points, although some analysts think that the central bank could act even more aggressively and raise interest rates by a full percentage point.

Atlanta Fed President Raphael Bostic said that “everything is in play,” including a full percentage point hike, after June’s CPI report, according to Bloomberg.

There are concerns that the Fed’s aggressive cycle of rate hiking will knock the economy into a recession, fears that worsen as inflation keeps growing higher and the Fed keeps having to take a more hawkish approach to monetary policy.

We are a long way from that. 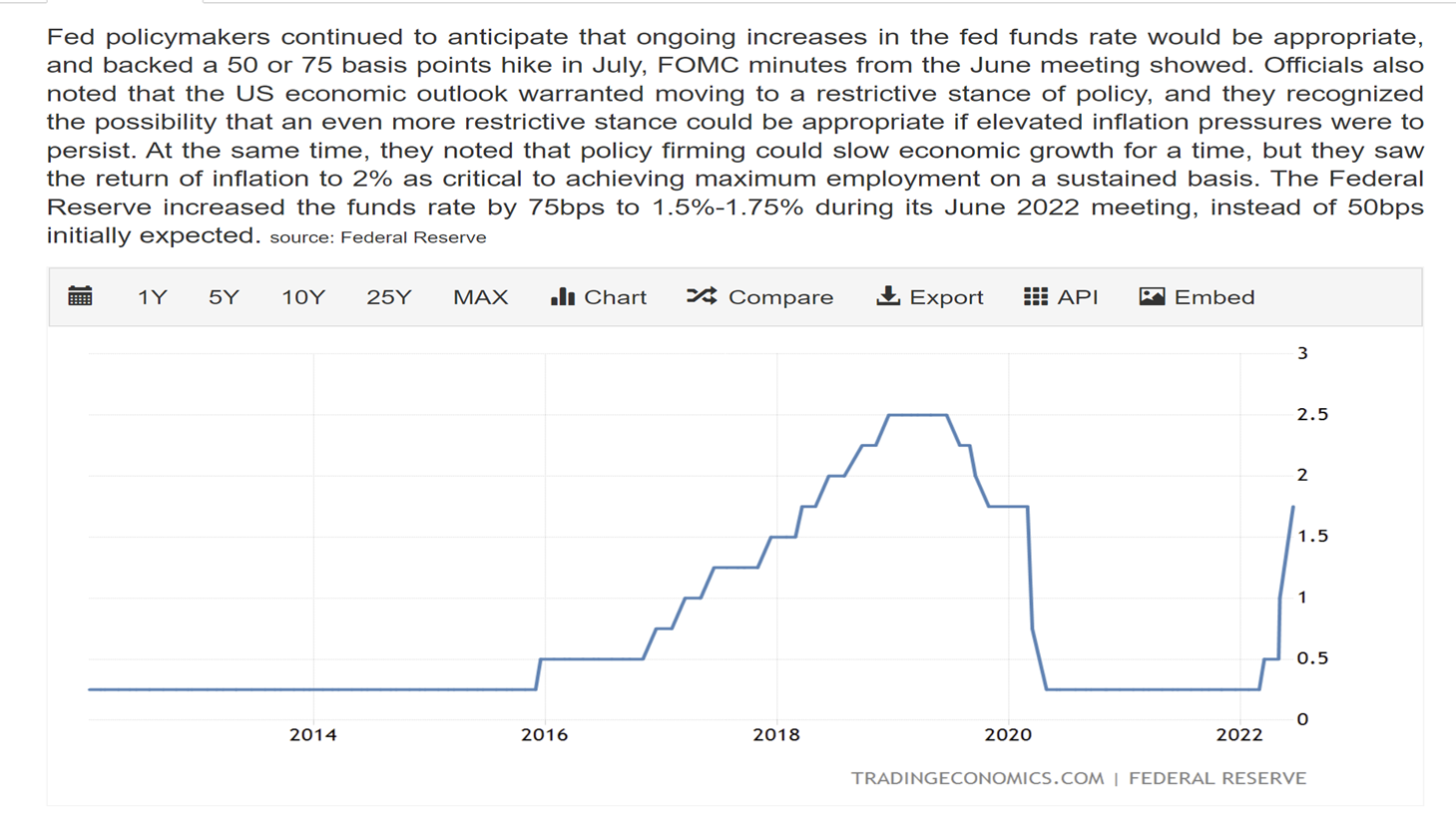 As the chart below illustrates, the current Fed Funds rate is hovering just under 2%.

Even if the Fed raises interest rates by 1%, inflation will probably not be affected but financial markets may be.

I expect that before the year is over the Fed will reverse course on the interest rate increases so the ‘economy can be supported’.  I should also point out that there are some analysts who disagree with me on this arguing that the dollar would be devalued to an even greater extent, further threatening it’s use as an international currency.

I believe that is the outcome that the Fed will choose given that that other choice is a painful deflationary period. 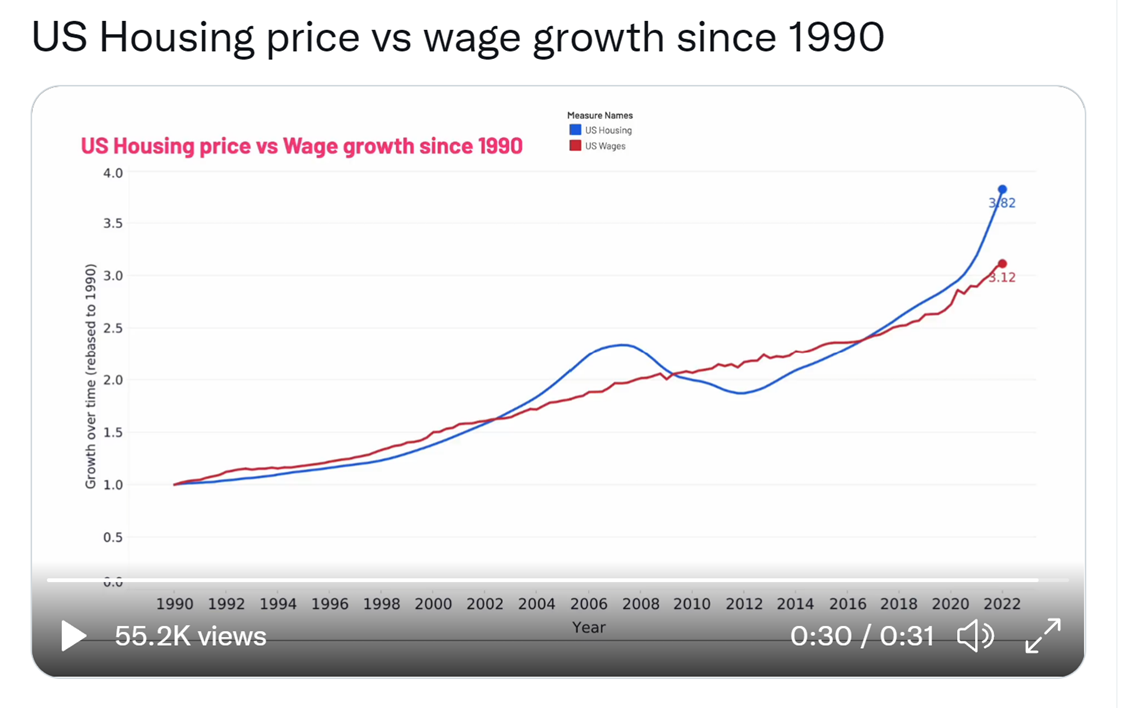 Ironically, the painful deflationary period will probably not be avoided.  In fact, we may be witnessing the onset of such a period presently.  Stocks are down significantly year to date and I believe real estate will soon follow.  Take a look at this chart illustrating US housing prices versus wage growth.  Seems apparent that this housing bubble is bigger than the one at the time of the financial crisis.

This week’s radio program and podcast features an interview with Karl Denninger.  I chat with Karl about green energy, the housing market, and provide my forecast for stocks moving ahead. Haven't heard the show yet? You can listen now by clicking on the "Podcast" tab at the top of this page.

“Happiness is nothing but good health and a bad memory.”