On the RLA Radio program this week, I interviewed the Head of Global Research for Elliott Wave International, Mr. Murray Gunn.  I’d encourage you to listen to the entire interview on the RLA App or at www.RetirementLifestyleAdvocates.com.

The topics that Murray and I discussed were wide-ranging but there was one underlying common denominator to our conversation – debt.

Globally, both in the public sector and the private sector debt levels are literally at nosebleed levels.

Long-term readers of “Portfolio Watch” know that since currency is debt rather than an asset (which has been the case since 1971) when debt levels are so high that they cannot be paid, currency disappears from the financial system.

That’s known as deflation which results in assets like stocks and real estate being reset.

There is no shortage of debt.  In this issue of “Portfolio Watch”, we’ll examine several areas in which debt has become totally unsustainable.

Economist Hyman Minsky argued that during long periods of bullish speculation, the excesses generated by reckless, speculative activity eventually lead to a crisis. Of course, the longer the speculation occurs, the more severe the crisis will be.

Minsky argued there is an inherent instability in financial markets. He postulated that abnormally long bullish cycles would spur an asymmetric rise in market speculation. That speculation would eventually result in market instability and collapse. Thus, a “Minsky Moment” crisis follows a prolonged period of bullish speculation, which is also associated with high amounts of debt taken on by both retail and institutional investors. 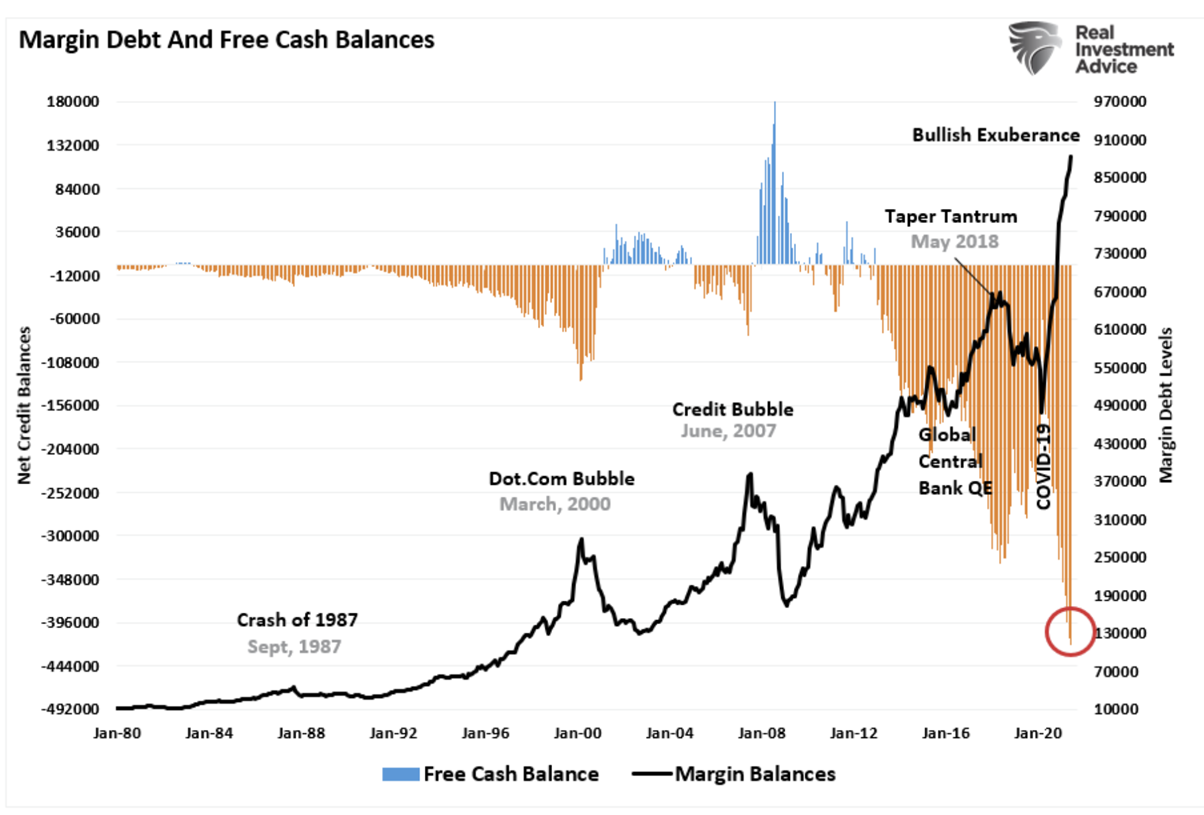 One way to view “leverage” is through “margin debt,” and in particular, the level of “free cash” investors have to deploy. In periods of “high speculation,” investors are likely to take on excess leverage (borrow money) to invest, which leaves them with “negative” cash balances.

While “margin debt” provides the fuel to support the bullish speculation, it is also the accelerant for the reversal when it occurs. Periods of low volatility, and steadily rising prices, lead to market complacency. As noted, the last period where we saw similar levels of low volatility was 2017.

Of course, that low-volatility period in 2017 didn’t last long. The “Minsky Moment” arrived in 2018 and lasted through 2020 as price swings punctuated the markets. While this current low-volatility regime can certainly last a while longer, it is likely naive to believe the next “Minsky Moment” will be any less punishing than the last.

Debt-fueled price bubbles are never sustainable.  This price bubble in stocks (in my opinion) has been fueled by record levels of margin debt.  Notice that margin debt levels presently are about triple what they were prior to the dot.com bubble imploding.

Mortgage debt is up significantly as well.  Over the past five years, according to Statista (Source:  https://www.statista.com/statistics/274636/combined-sum-of-all-holders-of-mortgage-debt-outstanding-in-the-us/), mortgage debt has increased by $3 trillion dwarfing the level of margin debt tied to stocks.

Notice that the Case-Shiller Housing Index, the most commonly used measure of home prices now stands about 30% higher than prior to the real estate market collapse at the time of the financial crisis.

This is another example of a debt-fueled bubble in my view.

It’s common knowledge that the Fed has been using newly-created currency to purchase mortgage-backed securities.  That’s been a primary driving force behind the rapid rise in real estate prices in my opinion.

But, the Fed has also been buying US Treasuries from member banks using newly created currency to do so.  Notice from this chart of an Exchange Traded Fund that has the investment objective of tracking the US Treasury long bond that bond prices have been steadily rising overall since the time of the financial crisis. 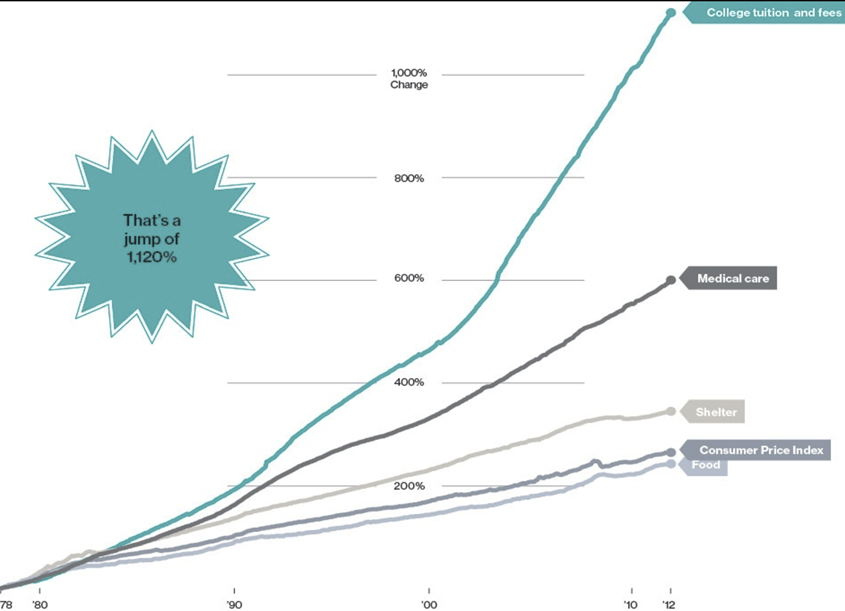 These are just a few examples of debt-fueled bubbles that exist, there are more.

My point is this.  The currency creation that is presently taking place is only postponing the reset.

Currency creation doesn’t make the debt go away, it actually allows for more debt to be added to the system, making the ultimate bust worse than it otherwise would be.  When inflation stops, deflation will be there to take its place.

As noted above, this week’s radio program is an interview with Mr. Murray Gunn who is the Head of Global Research at Elliott Wave International.

I chat with Murray about this very topic of inflation followed by deflation and get his take on what investors should be doing presently.

I interviewed Murray from his offices just outside London this past week.

You won’t want to miss the interview since Murray offers a free book to our listeners.

“If you want to tell people the truth, make them laugh.  Otherwise, they’ll kill you.”