One of the most obvious economic stories remains inflation.  As I discuss on the RLA Radio program this week with guest Karl Denninger, there is a time lag between money creation and the onset of inflation.

Money creation began in earnest last year in response to COVID as stimulus packages were passed and helicopter money was distributed to many households.  We are now seeing the effects of that money creation in the form of inflation. 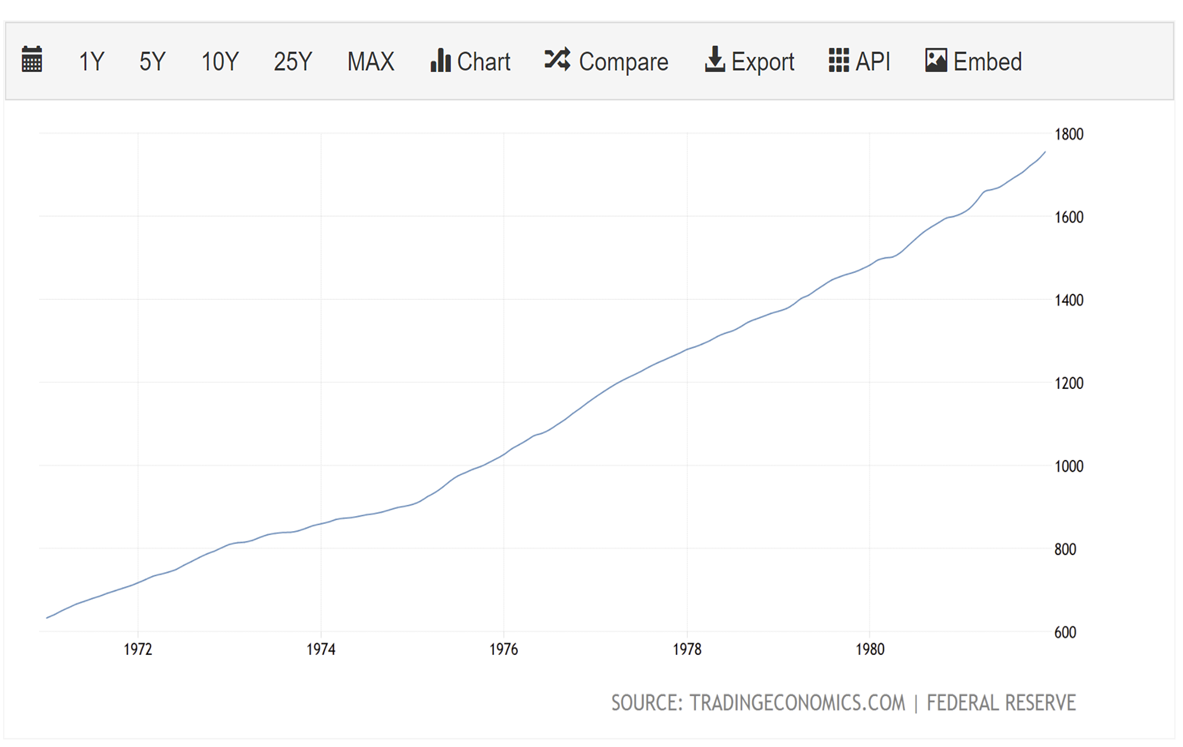 The current economic situation is beginning to resemble the 1970’s.  Prices, including fuel prices, are rising and the economy is contracting.  Economists refer to this economic environment as stagflation.

The chart, put together with data from the Federal Reserve shows the M2 money supply.

Notice that the money supply has expanded from about $15 trillion last year to more than $20 trillion presently.

You don’t need to be an economist to view that chart and understand why we are experiencing inflation. 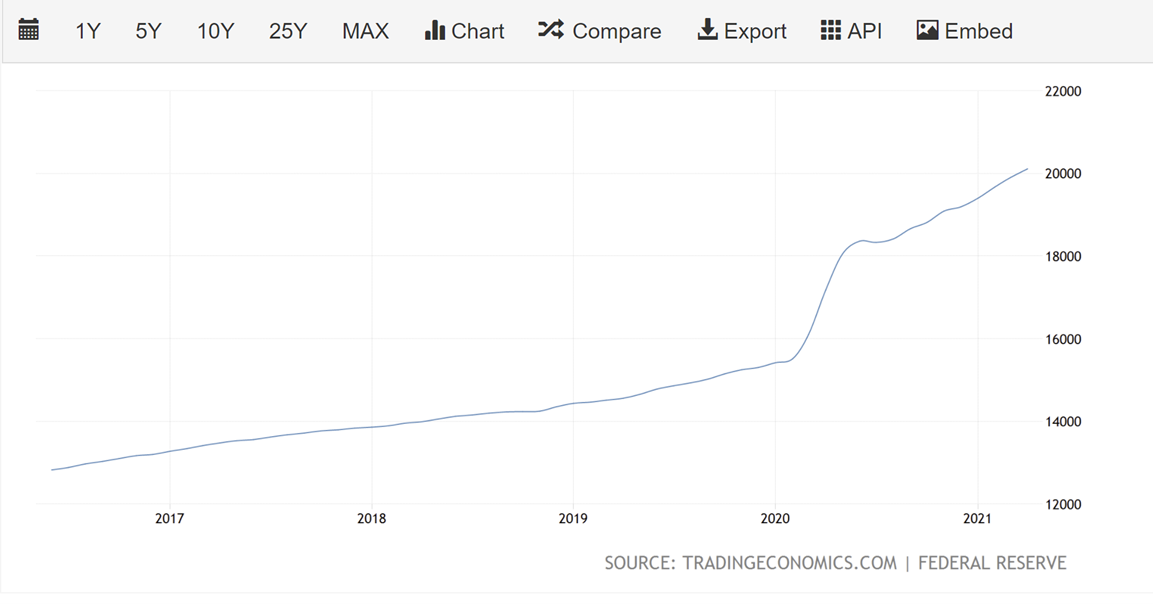 I noted above that the current climate resembles the 1970’s when the country experienced something similar.  The chart published here is a chart showing the growth of the M2 money supply from the time the US Dollar became a fiat currency in 1971 until interest rates were increased to fight inflation.

Notice that the money supply over that 12-year time frame roughly tripled.

Since the financial crisis, we have seen similar growth in the M2 money supply.  Over that time frame, like during the 1970’s the money supply approximately tripled.  We are now seeing the same end result.

Rather than owning up to the fact that too much fiat currency has been created, the Fed is doing what the Fed has done historically when the economic data gets ugly.  The Fed’s playbook is to either change the way the data is reported or just quit reporting the data altogether.

In this case, the Fed has chosen the latter.  This from David Kranzler of Golden Returns Capital (red font added for emphasis) (Source: https://www.investing.com/analysis/the-fed-further-reduces-its-transparency-200579465):

“Fostering transparency and accountability at the Federal Reserve was one of my principal objectives when I became Chairman in February 2006.”

Janet Yellen, 2013 as Vice Chairman of the Fed:

“Recently I used the word ‘revolution’ to describe the change from ‘never explain’ to the current embrace of transparency in the FOMC’s communication.”

“In a democratic system, any degree of independence brings with it the obligation to provide appropriate transparency. In turn, transparency provides an essential basis for accountability and democratic legitimacy by enabling effective legislative oversight and keeping the public informed.”

Over the years, I’ve learned to keep one hand on my wallet and one hand on my physical gold and silver safe when a Fed official promises more transparency.

Right after Bernanke promised more transparency, the Fed decided to no longer report the M3 measure of the money supply. The U.S. is the only major industrialized country that does not report M3.

With Jerome Powell at the helm, earlier this year the Fed quietly obscured the distinction between the M1 and M2 money supply measures, making it almost impossible to distinguish between bank demand and term deposits.

This is important because each classification provides information about the relative liquidity of the banking system. Now that distinction is impossible to assess.

Tuesday (May 11) the Chicago Fed announced that it would discontinue publishing the Midwest Economy Index after the Jun. 30, 2021, release:

“Our researchers’ standard approach for estimating the Midwest Economy Index (MEI) has become increasingly ineffective. As of early May 2021, we have determined that it will not be appropriate to publish the MEI’s results after the middle of the year.”

What is the Fed trying to cover up by eliminating this economic report? Interminable economic weakness masked by economic indices that show nominal gains which are primarily attributable to the price inflation effects of money printing rather than an increase real economic activity.

Make no mistake, the economy is much weaker than the politicians, Fed officials, and Wall Street animals are willing to admit. And much of what is reported as increasing economic activity reflects little more than the effect of price inflation on the input components of the various indices.

As such, the Fed is removing the trail of evidence and is preparing to take its money printing to a new level, in an a tragically flawed effort to stimulate real economic growth.

While inflation is undeniable, there is another trend taking place that makes inflation even more dangerous.  As Mr. Kranzler notes in his piece, the economy is not strong.  In real terms, the economy is contracting.

In case you missed it, Kranzler makes a very important point.  He says that when increasing economic activity is reported, it is the direct result of price inflation (or currency devaluation) rather than being attributable to real economic growth.

Mr. John Williams of www.ShadowStats.com tracks the economic output of the United States, typically measured by Gross Domestic Product.  As John explains on his website, the headline or reported GDP number refers to the most recent quarter’s annualized quarter-to-quarter rate of change.  In other words, the headline number is the annualized GDP number if the most recent quarter-to-quarter change was compounded for four consecutive quarters.  What this means is that the latest quarter can be reported as a positive annualized rate of growth while the actual annual rate of change is negative. 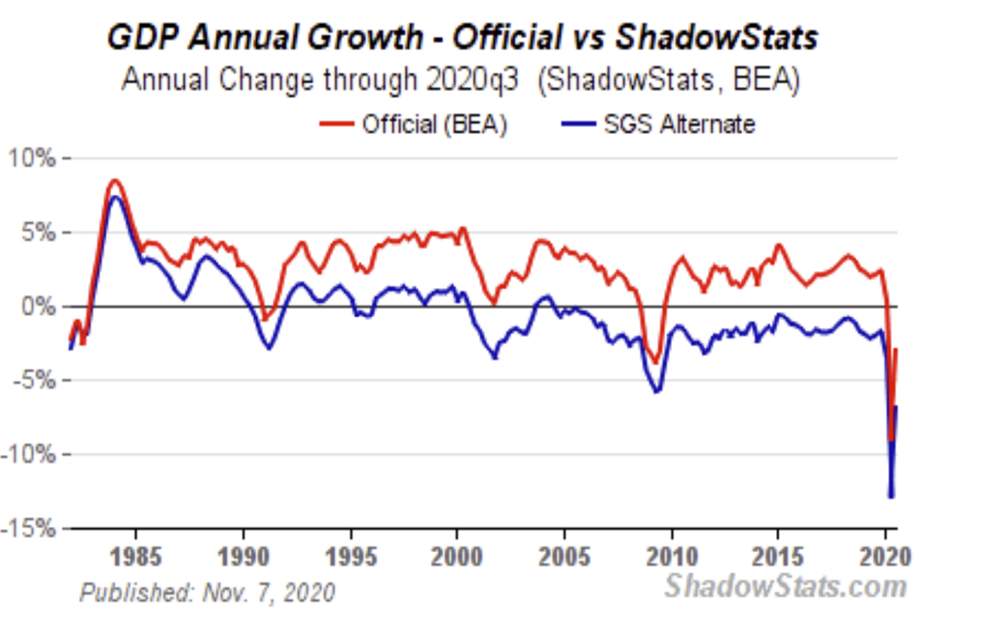 The chart, courtesy of www.ShadowStats.com, shows that GDP or economic output is contracting.

Keep in mind that GDP is contracting even when it’s measured in US Dollars that have been devalued through excess money creation.

Bottomline economically speaking is this – we are now looking at stagflation which is inflation combined with economic contraction.

There is only one way to cure stagflation, stop inflation by reducing the money supply and then endure the inevitable recession that follows.

The radio program this week features an interview with Karl Denninger of market-ticker.org.

I chat with Karl about the rent moratoriums that are expiring at the end of this month and how the economy will be affected.

The program is posted on the app and on the website.

If you don’t yet own the app, just go to the app store on your phone and search for “YOURRLA”.  You can download the app for free and get access to all of our free resources.

“If you do not take an interest in the affairs of your government, then you are doomed to live under the rule of fools.”