I have often discussed the parallels between 1929 and the Great Depression that followed and the present time.

The most notable similarity between the early 1930s and the present is massive debt levels in the private sector.

There are differences between economic conditions at the onset of the Great Depression and the present time as well.

The two most glaring variances are the currency system in use and the levels of government debt.

In 1929, the currency that was in use had a link to gold.  Currency was linked to real money and there was a limit to the amount of currency that could be created.  While that changed in 1933 when President Roosevelt made it illegal for American citizens to own gold, when the depression began, currency had a link to ‘real’ money.

In 1929, the US Government wasn’t broke.  That’s not true presently.

Today, US Government debt stands at more than $30 trillion, or about 130% of the economy.

The image on this page is a snapshot taken from the US debt clock website.

So, let’s summarize.  Private sector debt levels are about the same as when the Great Depression began but US Government debt is about 8 times greater when measured as a percentage of GDP.

In 1929, to use an analogy familiar to many, the US Government still had some room on its credit card to engage in deficit spending.  That is likely not true today.

How did US Government debt get so out of hand?

That brings me to the second glaring difference – the currency system in use then and now.

Presently, the US Dollar is a pure fiat currency as is every other currency in use around the world.  The term fiat currency simply means that the currency has no tangible backing, it is currency by decree or fiat.  The US Dollar is legal tender ‘for all debts public and private” because the government says it is.

Fiat currencies can be created at the will and whim of politicians and central bankers.  Fiat currencies make it easy to fund huge deficits that could never be financed if “honest” money were used.

It is this monster level of US Government debt that will have to make the ultimate outcome that we experience a painful deflationary environment as well.  The question is as deflation kicks in, will the Federal Reserve, the nation’s central bank, reverse course and begin another round of currency creation?

As I have forecasted previously, I believe they will.  That will lead, in my opinion, to more inflation, perhaps hyperinflation before the deflation sets in.

There is a fundamental economic principle that has been completely left out of the prevailing narrative.  Ignoring this principle doesn’t make it any less relevant.

This principle is best described by a statement that was made by the late economist, Herbert Stein.  If you’ve been a long-term reader of my work, you know that I am a big admirer of Mr. Stein’s simple, yet profound wisdom.

Stein said this, ‘if something cannot go on forever, it will stop.”

That is totally the case when it comes to deficit spending and debt accumulation funded by currency creation.

Applying a little common sense and critical thinking to the whole notion of creating currency to fund deficit spending brings one to the inescapable conclusion that it can’t continue forever as Mr. Stein succinctly stated.

It will end.  And it will end with a deflationary environment unlike any that anyone alive today has ever seen.

When does this occur?

As I have also often stated, the ‘what’ is easier to predict than the ‘when’.  So, the short answer to that question is that no one knows for sure.  But we do know that at some future point, we will have to deal with the debt and it will be an ugly, unpleasant time.

The current rate of debt accumulation worldwide has me thinking that we are nearing the day of reckoning faster than many may think.  In last week’s “Portfolio Watch” newsletter, I reprinted a chart of the global debt bubble that was originally published by Gold Switzerland. 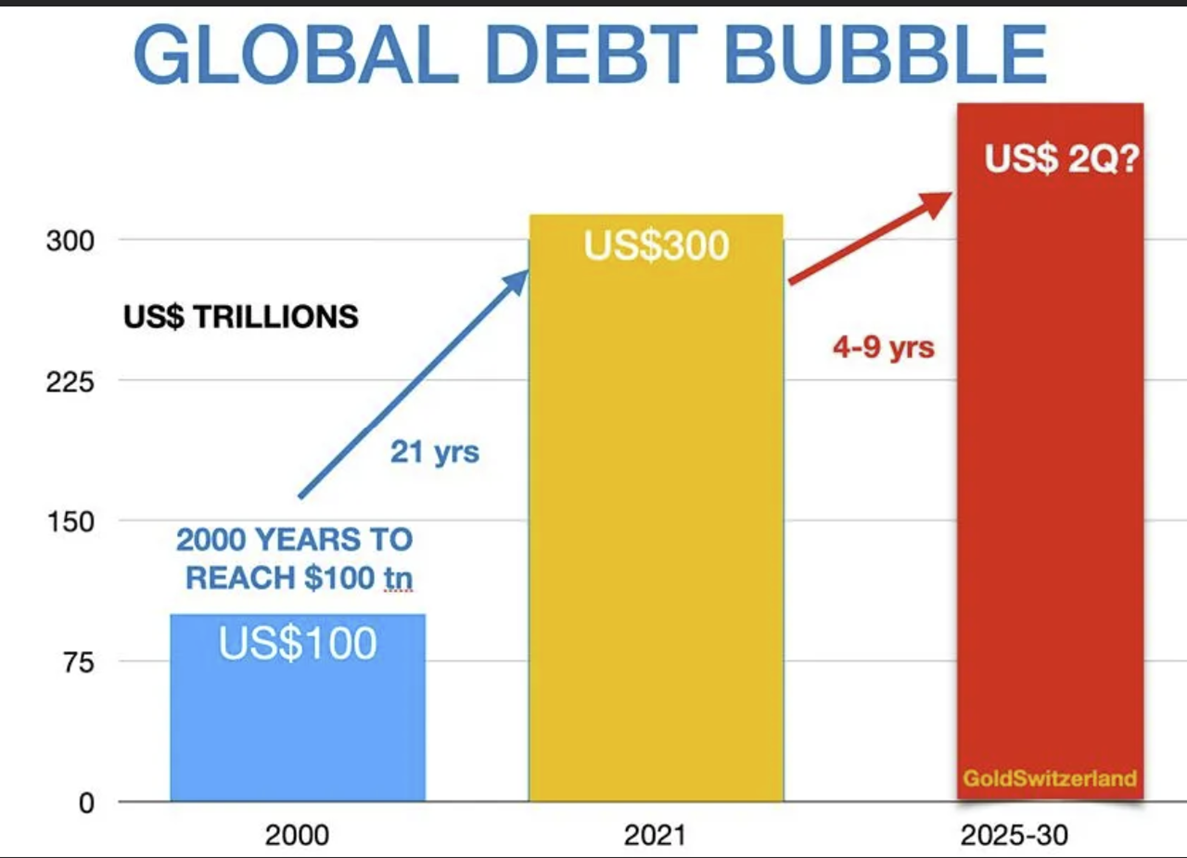 I’ve reprinted it again this week for your reference.

It took 2000 years to get to the equivalent $100 trillion in debt worldwide.  Then, it took only another 21 years to triple that debt level to $300 trillion.

At the present trajectory of debt accumulation, the world will see debt of $2 quadrillion in just 4 to 9 years.

While I don’t have a crystal ball that works, I simply cannot fathom getting to $2 quadrillion in debt before the deflationary period sets in with a vengeance.

That’s why I am such an advocate of using the “Revenue Sourcing™” planning strategy to position one’s assets.

As an interesting side note, I was walking through an antique store recently and stumbled upon a collection of “Life” magazines from the 1930s.  Ever curious, I began to peruse them.

I found an issue from December of 1931.  It sold for 15 cents and featured a drawing of a very sad Santa on the back of a single skinny, overworked reindeer with its ribs visible through its fur.

In the issue, there are many references to the depression that was raging at the time.  Thought I’d share a few with you.

“The one man who came through the depression without worrying was a member of a nudist cult who was on a diet.”

Then there was the David Letterman style list (WAY pre-Letterman) of the top 10 benefits of the depression:

This week’s radio program and podcast features an interview with the publisher of the Brookville Capital Intelligence Report, Mr. Simon Popple. Click on the "Podcast" tab at the top of this page to listen now!

“A fashion writer states that there is very little change in men’s suits this year.  He’s right.”

-From the December 1931 Issue of “Life” Magazine