As noted last week, the lead economic story remains inflation.  As I discussed last week, whenever money is created literally out of thin air in enough quantity, inflation is the result.

However, there is a time lag between the time money is created and the point at which inflation shows up.  In my view, we are now seeing the inflationary results of the massive new levels of money creation that took place last year.

The money creation didn’t stop last year.  It has continued in earnest.  With a proposed budget with a nearly two trillion-dollar deficit on the table and the Fed doubling down on its accommodative policies, one can only expect to see this problem worsen.

Last week, the May Consumer Price Index was reported.  As we have discussed in the past, this measure of inflation is badly flawed as it has been changed over time so that the reported inflation numbers look more palatable.

Despite this, in May the CPI increased by .6% which pushes the 12-month total to 5%.  Those ‘officially reported’ numbers don’t begin to tell the real inflation story.

Joe Carson of “The Carson Report” wrote a piece this past week after the official inflation numbers were released that does a nice job explaining how the officially reported inflation level of inflation differs from the real inflation rate.  (Source:  https://www.thecarsonreport.com/post/today-s-consumer-inflation-cycle-comes-with-yesteryear-denial-problems-consequences) (emphasis added):

Consumer price inflation is experiencing its most significant increases in decades. Yet, reported inflation does not capture the full scale and breadth of experienced inflation. I never thought the US would experience rampant inflation again, but based on the 1970s price measurement methods, the US experienced double-digit inflation in the past twelve months.

Over the last several decades, reported inflation has seen substantive measurement changes. For example, government statisticians now employ an arbitrary and non-market price for owner's rent, removing actual housing prices from the calculation. Other substantive changes in the CPI occurred in the mid-1990s following the Congress-sponsored Boskin report, which purportedly shaved 50 to 100 basis points off of reported core CPI each year.

Adjusting reported inflation for those exclusions or changes would result in double-digit gains in both headline and core CPI for the past twelve months. What's worse, knowing consumer prices are running at a double-digit pace, or not knowing actual inflation is that high?

Denying that the current inflation cycle is nothing more than a base effect and is, therefore, "transitory" brings back memories of the 1970s. In the 1970s, Federal Reserve Chair Arthur Burns denied that monetary policy played a role in the inflation cycle. Mr. Burns argued that higher inflation was due to idiosyncratic factors, such as food shortages and the OPEC oil embargo. The Fed Chair demanded that the Fed staff strip out the volatile food and energy components to prove his point, thereby creating what is now called the core inflation index. That proved to be a policy blunder as it allowed Mr. Burns to maintain an easy money policy that fueled the most significant and most extended inflation cycle in the post-war period.

In recent decades, regional branches of the Federal Reserve have created new price conventions (e.g., median cpi, trimmed cpi). These price measures are misleading as they eliminate the tails in the distribution of prices. And during price cycles, the price tail for items rising a lot is much larger in scale than those at the bottom.

Once inflation cycles start, they gain momentum on their own. That is because price cycles force changes in firms' pricing, ordering, inventory policies, and workers' wage demands.

Significant tightening in monetary policy breaks inflation cycles. It took the Fed Chairs of Volcker and Greenspan an entire decade, lifting official rates far above inflation to break the 1970s inflation, and in 1994 it took Greenspan a full twelve months to suppress a potential cyclical jump in inflation.

Today's inflation cycle creates many problems for the current generation of policymakers. First, how can you use justify changing monetary policy for an inflation problem you say doesn't exist? Second, if policymakers decide they need to raise real interest rates, what price measure do they use as a benchmark? Third, how does the Fed drive real interest rates higher when they own a third of the Treasury market.

Inflation cycles end badly, even when everyone is aware of the problem. Investors are the biggest fans of the "doing nothing" approach of the current generation of policymakers. Yet, if past inflation cycles are a guide to the future, investors will soon become the Fed's loudest critics.

I’ve stated often that it’s my view the Fed is painted into a corner here.  Should they raise interest rates and stop quantitative easing, a severely deflationary period would be the result.  Should the Fed continue its easy-money policies, insisting that inflation is transitory, inflation will worsen and lead to either, one, enough political pressure on the Fed to cease pursuing easy money policies or two, a hyperinflationary currency collapse.  Both outcomes lead to a period of significant deflation.

I find it interesting that history is repeating itself as far as Fed policy is concerned.  Mr. Carson, in his article, points out that former Federal Reserve Chair, Arthur Burns denied that the Fed’s easy money policies were causing inflation.  Instead, Mr. Burns blamed food shortages and OPEC.

Instead of owning up to the fact that the Fed had created the inflation problem, Mr. Burns changed the way that inflation was calculated.  That’s akin to someone who says they want to lose weight but won’t change their diet or exercise, changing the zero point on the bathroom scale to get a better number.  It doesn’t change reality and fools no one.

Yet, the current Fed leadership has taken a page out of Mr. Burns’ playbook.  As I noted previously, the Fed has stopped reporting some money supply data saying it’s no longer useful. 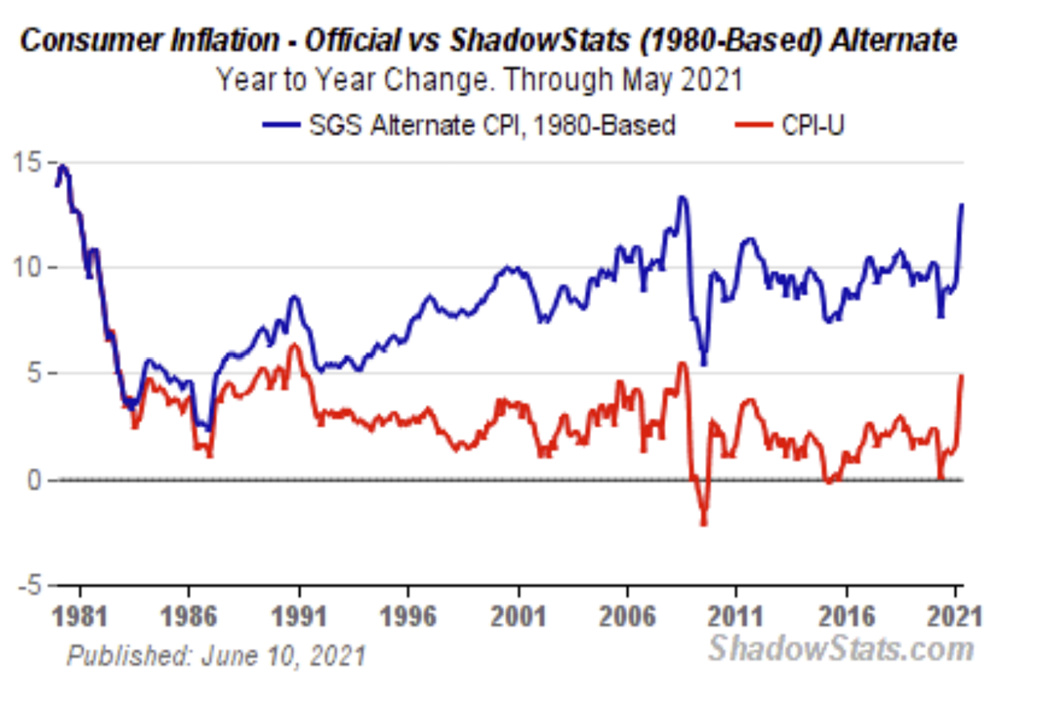 On this week’s radio program, I interview economist John Williams who tracks inflation data using the methods the government used to employ.  He would place the current actual inflation rate, using the calculation methods that Mr. Burns changed, is about 13%.

But you don’t need to look at alternate inflation calculation data to see that inflation is becoming a problem.  You can look at the officially reported inflation rate numbers to see this is a problem.

The next chart, compiled with data from the Bureau of Labor Statistics, illustrates an extreme spike in inflation using the officially reported inflation data.  Notice that the inflation rate began to spike at the end of calendar year 2020, about 9 months after excessive money creation began.

As I’ve already noted, given that money creation has continued at what can only be described as a maniacal pace, I expect that inflation will continue to spike.

As I also noted on this week’s radio program, there are three major changes coming in the next several months that, when combined with rising inflation have the potential to burst the bubble that Fed policies have created.  When the bubble bursts, I believe that both stocks and real estate will be adversely affected.

First, rent moratoriums are expiring at the end of this month.  Many sources are reporting that as many as 10 million Americans are behind on their rent and could be evicted.  Second, the enhanced Federal unemployment benefits expire at the beginning of September.  Third, student loan payment moratoriums will end in September and borrowers will once again be required to make payments on their outstanding student loan debt.

As noted above, the radio program this week features an interview with economist John Williams of Shadow Stats.

John and I talk about inflation and how he views the end game given current circumstances.  John is a brilliant economist who has been working in the field since the 1970’s and brings a great perspective to the conversation.

The program is posted here on the app and on the website.  You can listen to the podcast in its entirety by clicking the "Podcast" tab at the top of this page.

“I’m against picketing, but I don’t know how to show it.”