Stocks had another big rally week.  The major indices have now gained nearly 6% over the past two weeks.  A pullback in price after such a big up move would be typical. 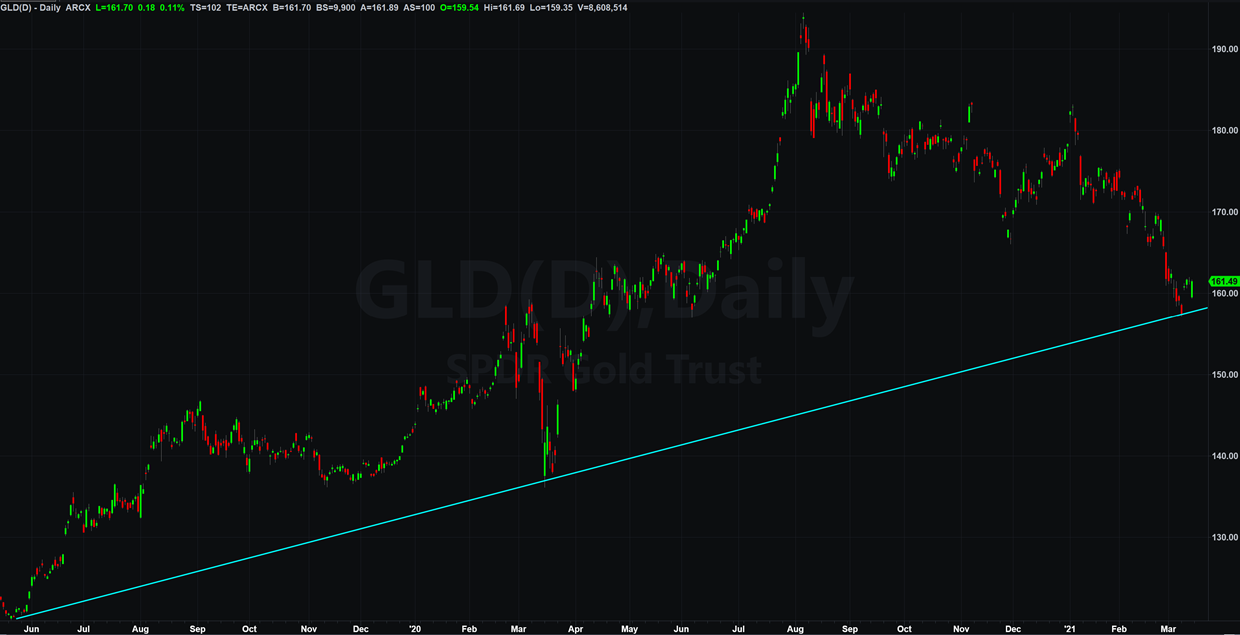 As I noted on the YPW Live - Headline Roundup Webinar last week, gold prices declined to the long-term, uptrend line and I expected they may stabilize.  To this point, that is what has happened.  I’ve reprinted the chart here.

This past week, the topic of inflation began to appear frequently in the news headlines.  Even many mainstream media sources noted that inflation seems imminent.

US Government debt saw yields increase which means bond prices fall.  This is a phenomenon that is observed when investors fear that inflation is on the horizon.

Treasuries tumbled anew Friday, sending 10- and 30-year yields to their highest since early 2020, amid growing concern stimulus will fuel an explosion in economic growth that ignites price pressures. Expectations for inflation over the next decade lurched to a seven-year high.

Yields on the 10-year benchmark rose as much as 10 basis points to reach 1.64% in U.S. morning trading, a level unseen since February 2020. The 30-year rate advanced almost 11 basis points to a session high of 2.40%, edging toward a January 2020 peak. Rates leaped across notes and bonds, with the biggest moves in the long end, steepening the yield curve. The 10-year rate has failed to close above 1.60% since early 2020, though it has surpassed that level in volatile intraday trading several times in recent weeks.

“We’re talking about a fair amount of stimulus -- both fiscal and monetary -- going forward,” BTG Pactual Asset Management’s John Fath said, referring to the $1.9 trillion pandemic-relief bill and prospects for more, along with the Federal Reserve’s pledge to stay accommodative. “We potentially could grow a lot faster and inflation could come into the horizon a lot quicker,” which begets higher rates.

The breakeven rate on 10-year notes, a measure of market expectations for annual consumer-price gains based on the yield gap to inflation-linked debt, topped 2.30% in early New York trading Friday, a level it hasn’t breached since early 2014. An equivalent measure for the five-year note touched its strongest level since 2008.

In our managed portfolios, we remain bearish on bonds as we have been since January of this year.  An Exchange Traded Fund that tracks the price of the US Treasury long bond has declined more than 10% since that time.

Reuters had this to say on the topic last week (Source:  https://www.msn.com/en-gb/money/other/us-consumer-prices-rise-underlying-inflation-muted-for-now/ar-BB1esatq) (emphasis added):

The mixed report from the Labor Department on Wednesday did not change expectations that inflation will push higher and exceed the Federal Reserve's 2% target, a flexible average, by April as declining COVID-19 infections and a faster pace of vaccinations allows the economy to reopen.

Inflation is also seen accelerating as price decreases early in the coronavirus pandemic wash out of the calculations. Many economists, including Fed Chair Jerome Powell, expect the strength in inflation will not stick beyond the so-called base effects and the reopening of services businesses.

"Base effects and one-time price increases stemming from the reopening of the economy and some pass-through of higher prices from supply chain bottlenecks should lift core inflation to 2.5% in the spring," said Kathy Bostjancic, chief U.S. financial economist at Oxford Economics in New York.

To put these inflation conversations in context, we need to understand that the methodology used to calculate the inflation rate has been changed over the years to make the rate of inflation seem more subdued.

This is a topic that is not often discussed nor widely understood.

For example, there are now adjustments for hedonics and substitution, and the weighting of the items in the basket of goods used to calculate the inflation rate are changed.  All these adjustments reduce the reported inflation rate.

A hedonic adjustment is an adjustment for convenience or literally for ‘pleasure’.  As items that we buy are improved, if prices go up some of that price increase is arbitrarily removed from the inflation rate calculation since the item has made our life more pleasurable.

I’ll give you an example that will give away my age.  Some of my earliest television memories were of three working channels on a black and white set, with no remote control.  If you wanted to change the channel, you had to get out of the chair and walk across the room and turn the knob on the set.

When I was old enough, my Dad had me serve as the remote, telling me what channel to put on.  Fortunately, there were only three choices so it didn’t take too long.

Then there is the adjustment for substitution.

This adjustment is made when an item that is included in the basket of goods and services that is used to calculate the inflation rate increases in price dramatically.  Because of this dramatic price increase, a bureaucrat arbitrarily determines that no one will buy that item anymore and another lower-cost item is substituted for the first item.

Finally, there are the adjustments for weighting.  These weightings are also arbitrarily determined.  For example, as of January 2021, health care was given a 7% weighting in the Consumer Price Index calculation even though healthcare consumes about 20% of Gross Domestic Product.

My first point is simply this:  you should discount any source that uses the Consumer Price Index as the measure of inflation. 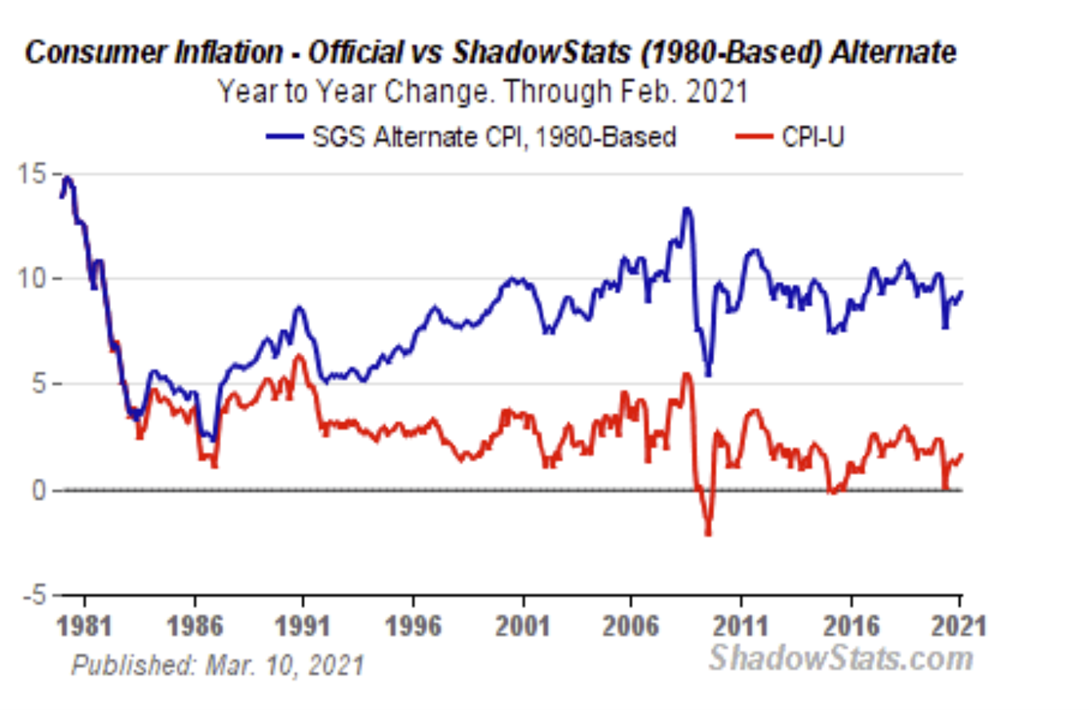 Past radio program guest, Mr. John Williams, calculates the inflation rate using prior methodologies.  You can check out his fine work at www.ShadowStats.com.  The chart on this page taking from Mr. Williams’ website shows that using the 1980’s inflation calculation methodology, the real inflation rate is in the 10% range.

The red line on the chart is the official CPI and the blue line is Mr. Williams’ alternate calculation.

My second point is that the real inflation rate is much higher than the reported rate but even those analysts who report on inflation using the lower, manipulated official inflation rate are now warning of impending inflation.

The Associated Press reported (Source:  https://apnews.com/article/business-prices-inflation-producer-prices-c084f9d40c972f3e6269f4e6c672e563) that energy prices increased 6% in February after a 5.1% rise in January.

The same piece reported that food prices jumped in February as well.

The radio program this week features an interview with Dr. A. Gary Shilling, publisher of “Insight” newsletter and long-time “Forbes” columnist.

I talk to Gary about his most recent “Insight” newsletter.  We discuss how demographics will affect the economy and the markets moving ahead.  I also get Gary’s forecast for the markets and asked him what he’s telling his subscribers presently.

The interview is now available.  Just click here or on the "Podcast" link at the top of this page to listen.

The “YourRLA” app is available at the Apple or Google app stores.  Just search “YourRLA” and download the app for free to access our newsletters, webinar replays, and podcasts from your favorite mobile device.

“Our lives begin to end the day we become silent about things that matter.”