The Dow to Gold ratio continued to fall last week.  As currency devaluation continues, this is an indicator that becomes more meaningful in my view.

If you are not familiar with the Dow to gold ratio, it is simply the Dow Jones industrial average priced in gold.  The Dow to gold ratio began the year at about 20 and it currently stands just under 16 1/2. That is a decline in stocks when measured in gold of almost 18%.

As currency is devalued, the nominal value of stocks increases. That can result in the illusion of an appreciating stock market when the reality is a depreciating currency, not a stock market that is increasing in real terms.

If we go back to the beginning of the calendar year 2000, we find that the Dow Jones industrial average was at about 11,500.  Presently, the Dow is nearly triple that level.

The question is, does that mean stocks have tripled in value, or does it mean that the US Dollar just buys a lot less?

By pricing the Dow in gold, we can get an idea.

In other words, if you were going to use gold to buy the Dow instead of US Dollars, you’d need 41 ounces of the yellow metal to own the Dow.  (You can’t actually buy the Dow, but this is a good comparison.)

Today, the Dow is at about 33,000 and the price of gold per ounce is about $2,000.  Taking the value of the Dow and dividing by the price of gold per ounce, one finds that the Dow to gold ratio is 16.5.  In other words, 22 years later, stocks when priced in gold have fallen nearly 60% while the same stock index priced in US Dollars has nearly tripled.

While that comparison may not conclusively answer the question posed above, another example may.

According to the United States Census Bureau, the median price of a home in the calendar year 2000 was $119,600.  (Source:  https://www.census.gov/data/tables/time-series/dec/coh-values.html)

If you were using gold to buy the new home in the calendar year 2000 rather than US Dollars, a new home would have set you back about 427 ounces of gold.

Fast forward to today and the National Association of Realtors reports that the median price of a home is $358,000.  (Source:  https://www.newhomesource.com/learn/cost-to-build-house-per-square-foot/)  Given that gold is about $2,000 per ounce, a new home could be had for about 179 ounces of gold.

Like stocks, home values have roughly tripled in the last 22 years when priced in US Dollars.  But, priced in gold, real estate values have declined just like stock values.

This brings me to my point this week, in real terms (gold) we are experiencing deflation.  Measured in US Dollars we have inflation.

As I discussed on my “Headline Roundup” webinar this week, Egon von Greyerz had some great observations along these same lines last week.  Here is a bit from his article (Source:  https://goldswitzerland.com/global-monetary-commodity-inferno/):

Inflation leading to hyperinflation was always guaranteed in the current debt-infested era, although the Fed and other Western central banks have never understood what inflation is. Just as they didn’t understand that their fake and manipulated inflation figures couldn’t even reach the Fed target of 2%. Now with real US inflation exceeding 15% (see graph below), the Fed has a new dilemma that they are totally unprepared for.

The US government conveniently changed the calculation of inflation to suit their purpose. Had they stuck to the 1980s established method, official inflation would be over 15% today and rising.

For years, the US Fed unsuccessfully tried, with all the king’s horses and all the king’s men, to get inflation up to 2%. In spite of throwing $ trillions at the problem and keeping interest rates at zero, they never understood why they failed.

In spite of printing unlimited amounts of counterfeit money, inflation for years stayed nearer 0% than 2%.

Now with official inflation at 7% and real at 15%, the Fed can’t understand what has hit them as we know from their laughable “transitory” language.

So now a quick volte-face for the Fed to figure out how to reduce inflation by 5 percentage points and more likely by 13 to get inflation down to 2% instead of up to 2%.

Clearly, the Fed can never get it right but many of us have known that for a very long time.

If the Fed studied and understood Austrian economics rather than defunct Keynesianism, they would know that the real inflation rate depends on growth in money supply rather than the obsolete consumer price model. 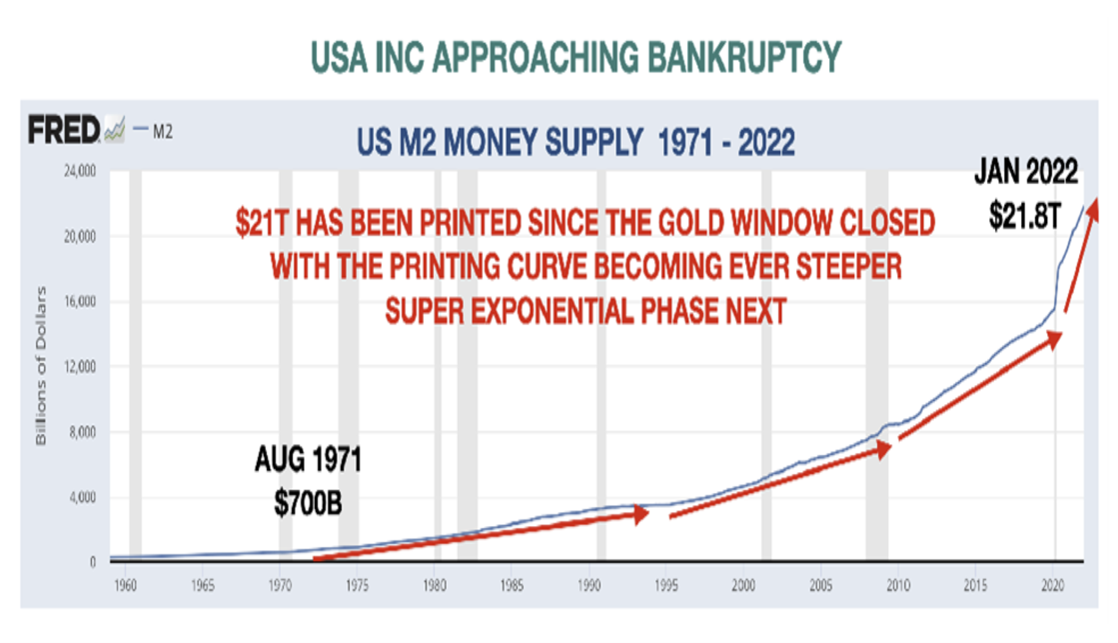 So let’s take a look at the growth in Money Supply. Since 1971, M2 has grown by 7% annually. A 7% growth means that prices double every 10 years. Thus 100% total inflation over 10 years rather than the 2% per annum that is the Fed target.

But as the chart above shows, the exponential phase started in March 2020 with M2 growing by 19% annually since then. That means a doubling of prices every 3.8 years.

Since the money supply is growing at 19% annually, this means that inflation is also 19% based on our Austrian friends.

And this is what the US and the world were facing before the Ukraine crisis. But now there is a lot of explosive fuel being poured on the global inflation fire.

Russia has the biggest natural resource reserves in the world which include coal, natural gas, oil, gold, timber, rare earth metals, etc. In Rubles, these reserves will obviously appreciate substantially with the falling currency.

In total, the Russian natural resource reserves are estimated at $75 trillion. That is 66% higher than the second country USA and more than twice as much as Saudi Arabia and Canada.

Even if the total Russian supply is not lost to the world, it is clear that the West is determined to punish Russia to the furthest extent possible. Therefore, as we have already seen in the major escalation of oil and gas prices, the shortages will put insufferable pressure on the prices of natural resources.

I have for quite a few years warned about the coming inflation, leading to hyperinflation, based on unlimited money printing.

But the dynamite of a global commodity crisis and shortages thrown into the already catastrophic debt and global monetary fire will create an inferno of nuclear proportions.

If a miracle doesn’t stop this war very quickly (which is extremely unlikely), the world will soon be entering a hyperinflationary commodity explosion (think both energy, metals, and food) combined with a cataclysmic deflationary asset implosion (think debt, stocks, and property).

The world will be experiencing totally unknown consequences without the ability to solve any of them for a very long time.

All the above would most likely happen even without a global war. But if the war spreads outside Russia and Ukraine, then all bets are off. At this point, I am not going to speculate about such an outcome since what is standing in front of us currently certainly is bad enough.

This week’s radio program and podcast features an interview with Mark Jeftovic, publisher of “The Crypto Capitalist Letter”. Click on the "Podcast" tab at the top of this page to listen to the show.

As long-time readers know, I have been an advocate of precious metals to protect from inflation and have not been a proponent of cryptocurrency for that purpose.  I have a debate with Mark on this topic and get his take on the current economic health of the world and talk some politics too.

“If you are out to describe the truth, leave elegance to the tailor.”