To sum up last week’s market action in a word, markets were absolutely ‘crazy’ last week. 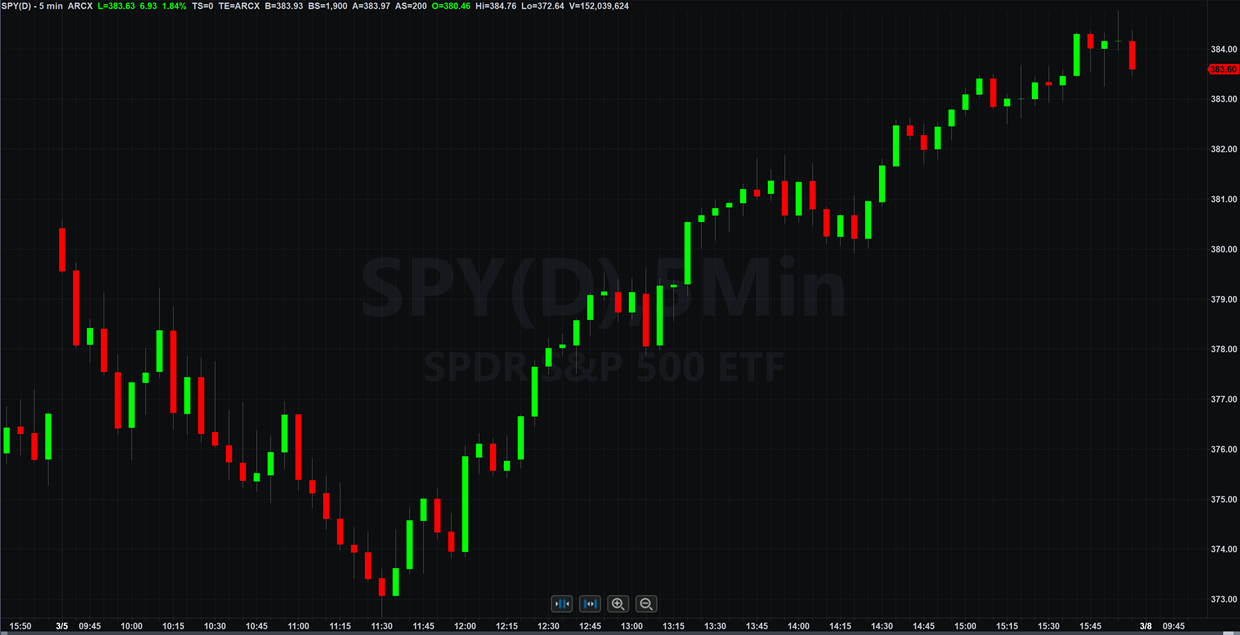 The NASDAQ stock market index is down for three consecutive weeks but the late surge in stocks on Friday lifted the Dow and the Standard and Poor’s 500 into positive territory for the week as noted in the data box above.

The chart on this page illustrates the stock price action from Friday, March 5.  It is a 5-minute chart of an exchange-traded fund that tracks the Standard and Poor’s 500.  Notice the market dropped nearly 3% at the open before finishing positive for the day.

This is certainly not ‘normal’ market behavior.

Past radio guest, John Mauldin, publisher of the widely read weekly newsletter “Thoughts from the Frontline”, noted last week that “everything is broken”.  An observation that I’ve been making here in “Portfolio Watch” for a long time although I’ve used the word artificial to describe the current climate rather than broken.  In my humble opinion, the word artificial more accurately describes the situation. 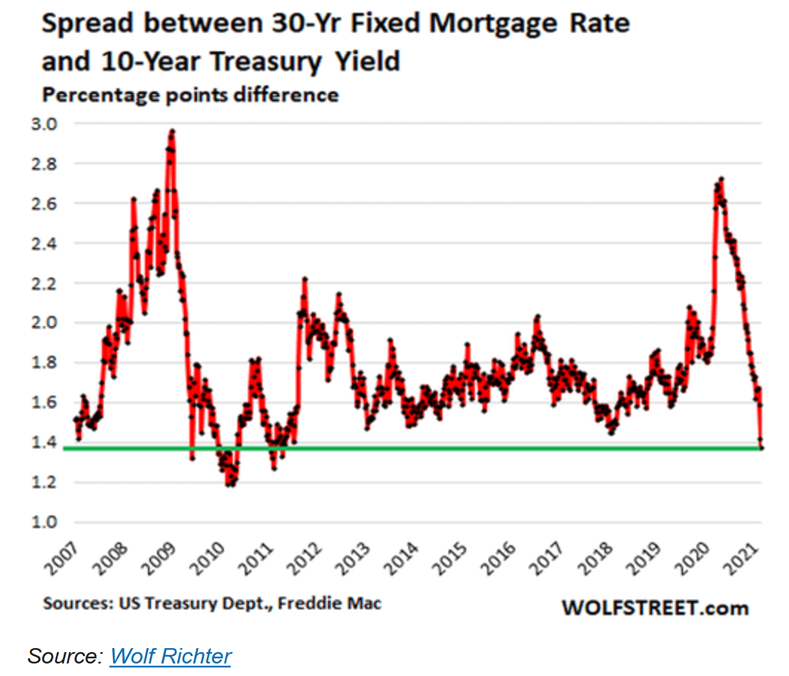 Mauldin points out that the credit market is broken.  Here is a bit from Mauldin’s piece (Source:  https://www.zerohedge.com/markets/mauldin-everything-broken):

Obviously, lenders take more risk on mortgages than they do when buying Treasury bonds. We would thus expect mortgage rates to be higher, and they are. But does that risk really swing so wildly? Should it double, or fall by half, in only a few years’ time? Of course not. But that’s what happened, and there’s no mystery why. Mortgage spreads collapsed in 2009 and 2020 because the Federal Reserve bought truckloads of mortgage-backed securities.

Economic fundamentals didn’t do this. A committee decided to encourage home purchases and did so by making it cheaper to finance those purchases. The predictable result is a housing boom. Or, in the current case, amplification of a boom that was already happening for demographic and other reasons.

Mauldin states that the traditional concept of retirement is also broken.  For one basic reason, yields have collapsed; they’ve been held to artificially low levels.  While retirees were once able to invest their retirement savings in interest-bearing vehicles and live off the interest and their Social Security, those days are a fond memory.

Presently, many retirees and soon-to-be retirees are taking too much investment risk with their nest egg because they think they have no other alternative.  And, it’s not just many retirees who are overallocated to stocks and low-quality bonds, the same could be said about pension plans.

Mauldin makes the point that stocks are also broken.  He states that prices in any market are determined by supply and demand.  Because many otherwise conservative investors have gravitated to the stock market looking for a decent return on investment, demand has been artificially created.

When it comes to stocks, that is definitely the case in my view.  But this artificially created demand isn’t the only thing keeping stock prices up even though valuation levels are at historically heights, when stocks decline, it’s now known that the Fed through the “Working Group on Financial Markets” or the Plunge Protection Team as it is often called, will step in and prop up stocks.  To digress for a moment, given the price action of stocks on Friday, this may have been the handiwork of the PPT.

Another factor responsible for driving stock prices higher is that many companies are loading up on debt because interest rates are artificially low and using the newly borrowed money to buy back the company’s stock.  These stock buybacks are a form of financial engineering, creating artificial demand for stocks and artificially increasing the earnings per share of a company.

When examining in detail everything that Mauldin states is broken, there is one primary reason – the Fed has intervened in these markets, either directly or indirectly, with its artificial money policies.

While recognizing that markets are artificial or broken is important, you can’t stop at there.  You need to ask yourself some very important questions – the most important being how will these artificial markets return to reality?

As I have contended for a very long time, there will have to be a reset.  This reset will be proactive or reactive.  A proactive reset would have politicians and policymakers conclude that continuing with the current artificial money policies will end badly and action needs to be taken sooner rather than later to bring things back to reality.  A reactive reset would be a forced reset that would be required because the artificial money policies have caused those using the currency to lose confidence in it and move from the currency to other ways to store their wealth.

It is this tipping point that sees hyperinflation emerge.  There are those analysts, many of whom I’ve interviewed, respect and appreciate, that take the position that we cannot see inflation without demand.  That is true.

But, it’s important to remember that there are two ways that demand builds.  The first is a desire to own an asset the second is a desire to store wealth in something other than the currency that is used in commerce.

The current artificial housing boom has been driven by artificially low-interest rates and low down payment requirements.  This is demand from a desire to own an asset, in this case, the asset is a home.

Should the present monetary policies continue, many who are storing wealth in US Dollars or another fiat currency may move to store that wealth in another form.  This phenomenon will create demand also, but for a different reason.  Rather than demand to own an asset it’s demand to exit an asset, in this case, a fiat currency.

By all accounts, present monetary policies will continue and probably intensify.  On March 6, the Senate voted to approve its version of the $1.9 trillion stimulus package.  Now, the Senate bill goes back to the House for approval.

From where will the funding come for this additional expenditure of nearly $2 trillion?

The Fed of course.  Through additional money creation.

I can see the aforementioned tipping point from here.

If you received unemployment benefits in 2020, you may want to wait to file your 2020 tax returns or risk having to file an amended return once/if congress gets the tax status of unemployment benefits sorted out.  (Source:  https://www.zerohedge.com/markets/senate-passes-19-trillion-stimulus-package)

The provision to raise the minimum wage to $15 per hour was eliminated from the bill.

Finally, this week, completely unrelated, did you see the story of the Tom Brady rookie card that recently sold at auction for $1.32 million?

It was the highest price paid for a football card ever.  Less than 100 of the cards were produced and this card was in impeccable condition.

The card purchase was made by a card collector and long-time fan of Tom Brady.

`The radio program this week features an interview with Dr. Charles Nenner, a cycles analyst and frequent radio and television commentator on financial markets.

We get Dr. Nenner’s forecast for stock markets as well as gold and silver markets.  He also provides a tutorial in using cycles to analyze markets.

The interview is now available on the app and the website, or by clicking on the "Podcast" tab at the top of this page.

The app is the “YourRLA” app and is available at the app store.  Just search “YourRLA” and download the app for free to access all of our newsletters, podcasts, and webinar replays from your mobile device 24/7.

“Beware of all enterprises that require new clothes.”