Emerging market stocks continue to show weakness and the bond markets may be beginning to show signs of life.

Last week, I shared a chart of the “Buffet Indicator” a stock valuation tool that was named after Warren Buffet after he revealed in an interview it was his favorite method to use to value stocks.

Using that indicator, stock valuations are now 20% higher than at the peak of the tech stock bubble.  That statistic alone validates a cautious approach to investing.  Dollar-cost averaging into portfolios that have hedged stock positions or exit strategies are techniques to consider at this juncture in the markets.

This past week, I read an article that revealed that Alan Greenspan, the former Chair of the Federal Reserve is actually a gold bug.  (Source:  https://goldswitzerland.com/fed-heads-lose-their-head/)

The article was penned by Egon von Greyerz, whose work I often read.

It will come as no surprise that Mr. von Greyerz concludes that politicians and policymakers often speak with “forked tongues”.  Here is a bit from his piece:

That politicians speak with forked tongues is a well-known axiom. The day they put the political cap on, it is impossible for them to tell the truth.
The same with the heads of the Federal Reserve. Whatever views the appointee previously had about sound money is completely blown out of the water, once he/she enters the Eccles building.

My colleague Matt Piepenburg wrote about the author of the “Everything Bubble” Alan Greenspan last week. And the “Maestro” is the epitome of someone who lost all his senses as he had to violate virtually every single principle he stood for when he became chairman of the Fed.

Egon then went on to discuss an essay that Mr. Greenspan authored in 1966 titled, “Gold and Economic Freedom”.  It is important to note that Greenspan wrote this piece five years prior to the United States reneging on the Bretton Woods agreement in which the United States agreed to back the US Dollar with gold.  The US agreed to exchange US Dollars for gold at a rate of $35 per ounce as part of that agreement.

“Thus, under the gold standard, a free banking system stands as the protector of an economy’s stability and balanced growth. When gold is accepted as the medium of exchange by most or all nations, an unhampered free international gold standard serves to foster a worldwide division of labor and the broadest international trade.”

Sure makes Greenspan sound like a gold bug, doesn’t it?

Mr. von Greyerz points out that Greenspan has taken this position regarding gold more than once.  This, again, from Mr. von Greyerz’s article:

In a 1978 congressional hearing, Greenspan stated:

“In the absence of the gold standard, there is no way to protect savings from confiscation through inflation. There is no safe store of value.”

You read that correctly.  In testimony before Congress, Greenspan said that without using gold as money, it is impossible to preserve wealth and protect that wealth from the ravages of inflation.

But, then in 1987, Mr. Greenspan became the Chair of the Federal Reserve and, at that point, it seems, his position changed.  It was Greenspan who began the practice of money creation.  While he served as Fed Chair prior to the advent of quantitative easing and helicopter money, Greenspan did manipulate the money supply by controlling interest rates.

It seems that during his tenure at the Fed, Greenspan suppressed his true feelings about gold as money.  As von Greyerz notes in his article, Greenspan is the father of the everything bubble in which we now find ourselves.

Greenspan did slip once during testimony before the House of Representatives in 1998 when he said, “I am one of the rare people who still have a nostalgic view of the old gold standard, as you know, but I must tell you, I am in a very small minority among my colleagues on that issue.”

After he left his post as Fed Chair, Greenspan once again spoke openly and freely of his affinity for gold as a currency.  In 2014, Greenspan said, “Gold is a currency.  It is still, by all evidence, a premier currency, where no fiat currency, including the dollar, can match it.  Yet gold has special properties that no other currency, with the possible exception of silver, can claim.  For more than two millennia, gold has had virtually unquestioned acceptance as payment.  It has never required the credit guarantee of a third party.  No questions are raised when gold or direct claims to gold are offered in payment of an obligation.”

Mr. von Greyerz points out that subsequent Fed Chairs have not shared Greenspan’s views on gold.

Former Fed Chair, Ben Bernanke, while being questioned by Ron Paul stated “the reason people hold gold is to protect against a tail risk, a really, really bad outcome.”

When Dr. Paul asked Bernanke if gold was money, Bernanke replied, “No, it is an asset.”

Paul then followed up by asking Bernanke why central banks hold gold.  Bernanke replied by saying, “Well, it is a tradition.”

Not a great answer.

Current Fed Chair Jerome Powell seems to be clueless about gold.   This from von Greyerz’s article:

The current Fed head also has, not unexpectedly, very little understanding of gold. In a recent discussion at the Bank for International Settlement (BIS) Powell described Bitcoin as an asset that is not backed by anything.

So far I will clearly agree with him. “Crypto assets are highly volatile and therefore not useful as a store of value,” he said. It is a speculative asset that is essentially a substitute for gold rather than for the dollar”.

So yet another clueless Fed head!

The obvious question to ask Powell is:

Why the hell don’t you sell your 8,000 tonnes (allegedly) of gold and buy Bitcoin instead??
That is the obvious conclusion if Crypto assets are a substitute for gold. Also, imagine the costs you would save Mr. Chairman as 8,000 tonnes of gold is $4.4 trillion and would fit on a small memory stick that you could keep in your pocket.

History teaches us that the basic rules of economics and currency cannot be changed.  Ultimately, it is my firm belief that gold or gold and silver will once again become money.  From that standpoint, I am in agreement with Mr. Greenspan.

Meanwhile, the massive money creation in which the Fed has been engaging in creating inflation in many areas of the economy.  Food and lumber are just two examples.

Massive new money creation being distributed as helicopter money to the masses is creating a banana republic look in the United States. 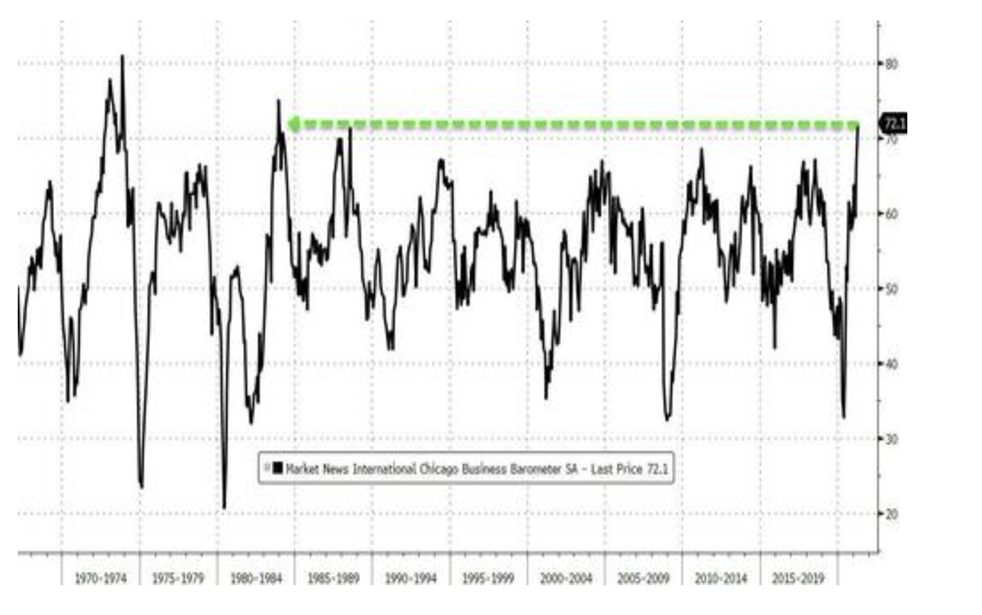 The Chicago PMI Index has not been at the current level since 1980, when then-Fed Chair, Paul Volker raised the Fed Funds rate to 22% to combat inflation.  The chart illustrates.

Yet, the Fed sees no inflation?

Last week, the Fed issued a statement that conveyed the Fed intends to keep interest rates near zero and continue ‘bond purchases’ (a.k.a. money creation) of $150 billion per month.

Mr. Powell made the following statement to reporters last week.  “We want inflation to run a little bit higher than it’s been running the last quarter-century.  We want it at 2%, not 1.7%.”

The Fed’s policy moving ahead is clear.  Print, print, and print some more.  Interesting that Mr. Powell subtly changed the inflation narrative once again suggesting that the Fed is now averaging inflation over a 25-year time frame.

When you couple that fact with the truth that the Fed’s measure of inflation is severely flawed and underestimates the inflation rate by a significant margin, seems that we might all take Mr. Greenspan’s advice and make sure we’ve hedged our assets by owning gold and silver.

The radio program this week features an interview with best-selling author and economist, Mr. Harry Dent.  Harry was one of the first to call the bull market of the 1990s in his book “The Great Boom Ahead”.

You won’t want to miss his predictions for markets for the rest of 2021.

The program is posted on the app and on the website.

“It is inhumane, in my opinion, to force people who have a genuine medical need for coffee to wait in line behind people who apparently view it as some kind of recreational activity.”