Your Portfolio Watch Weekly Update May 09, 2022

From where I sit, it seems that stagflation is the most likely economic outcome near term.

Stagflation is defined as inflation combined with economic contraction.

The official inflation rate is 8.5%, but any long-term reader of “Portfolio Watch” knows this official number is highly manipulated.  The actual inflation rate, absent favorable adjustments to make the reported number appear more palatable, is higher, likely mid-teens, depending on whose data you want to believe.

No matter, inflation is rampant.  The Fed is ever-so-incrementally increasing interest rates to ostensibly fight inflation.  The reality is that the level of increase so far will probably not subdue inflation.

The economy is still growing officially, but from my perspective, once the ultimate revisions are made, we are probably in a recession presently.

On my weekly “Headline Roundup” webinar, I discussed the opinion of Mr. Peter Grandich, founder of Peter Grandich and Company, relating to inflation.  Grandich is of the opinion that the Fed is well behind the curve when addressing the inflation problem.  Long-time readers of “Portfolio Watch” know that I agree completely.

Grandich says that inflation today is a completely different animal than it was in the 1970s which was the last stagflationary environment experienced by the country.  Grandich says "the situation is beyond what the Fed can do now".

“Social and political disharmony is at the highest level since the onset of the Civil War in the U.S.,” Grandich said, “and with the world suffering economic challenges, it does not paint a good picture for the future.”

Grandich added, that he is investing only in the gold market presently.

As far as the topic of economic contraction is concerned, Deutsche Bank recently became one of the world’s first major banks to forecast a recession.

This from “CNN Business”:

“Deutsche Bank raised eyebrows earlier this month by becoming the first major bank to forecast a US recession, albeit a mild one.

Now, it's warning of a deeper downturn caused by the Federal Reserve’s quest to knock down stubbornly high inflation.

‘We will get a major recession,’ Deutsche Bank economists wrote in a report to clients on Tuesday.

The problem, according to the bank, is that while inflation may be peaking, it will take a long time before it gets back down to the Fed’s goal of 2%.  That suggests the central bank will raise interest rates so aggressively that it hurts the economy.”

As I have often stated, the Fed is between the proverbial rock and a hard place, all of their own making.  If the bank increases interest rates in a meaningful manner, a recession will have to be the ultimate outcome.

On the other hand, if the economy officially enters a recession and the Fed reacts by easing once again, the inflation monster will be further fueled.

There are already signs that the economy, addicted to the artificial stimulus of the Fed, is reacting negatively to the very modest tightening to date. 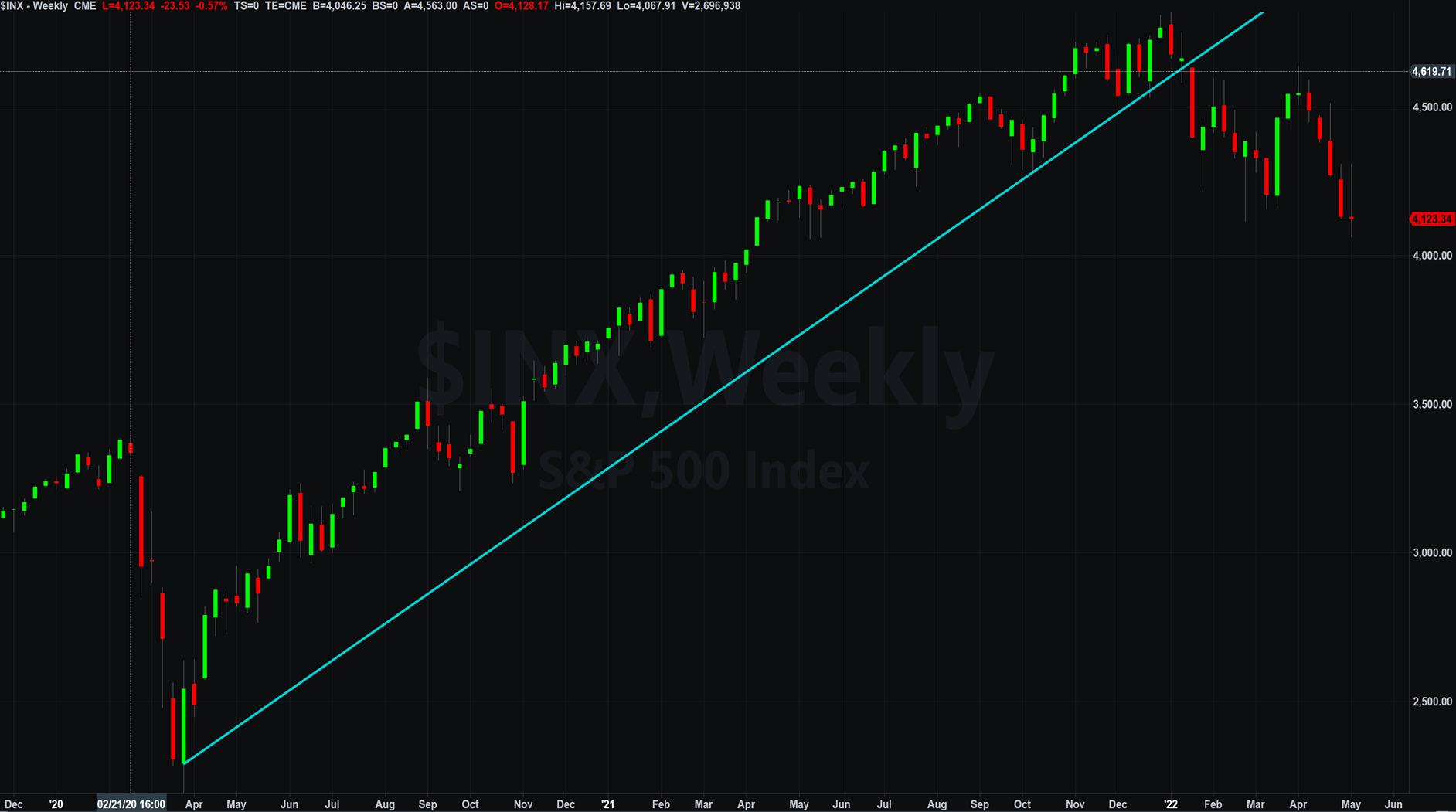 Note the uptrend line drawn on the chart from the most recent market bottom in 2020 to the end of 2021.

In this report, shortly after the first of the year, I suggested that the top in stocks might be in.  At this point, that seems to be the case, and I expect the series of lower highs and lower lows to continue.

At this juncture, the Fed is continuing with its modest program of tightening.  The question will be how they react if stocks fall harder and go much lower.

As noted above, more easing will mean more inflation.

There are three economic outcomes here, in my view:

One, the Fed stays the course, raising interest rates modestly and intermittently.  This course of action means that inflation may accelerate more slowly, but we also have a recession.  This is the stagflation outcome I discussed above.

Two, the Fed, fearing recession, reverses course and begins currency creation once again while reducing interest rates.  This could mean more inflation, even hyperinflation, which will ultimately transition to a severely deflationary environment, perhaps after a currency event of some type.

Three, the Fed, to get inflation in hand, increases interest rates so we have net positive interest rates after factoring in inflation.  This course of action likely leads almost immediately to the deflationary outcome.  In order to pursue this option, the federal budget would also have to be balanced or be a lot close to balanced.

Near term, I expect option one or stagflation outcome.

However, it would not be surprising to see the Fed revert to option two when the economy worsens.

And that seems to be what is occurring.

While it is traditionally viewed as a B-grade indicator, the March consumer credit report from the Federal Reserve was an absolute shock and confirmed what we have been saying for months: any excess savings accumulated by the US middle class are long gone, and in their place, Americans have unleashed a credit-card fueled spending spree.

And while non-revolving credit (student and car loans) rose by a relatively pedestrian 21.1 billion (which was still the 6th highest on record)... ... the real stunner was revolving, or credit card debt, which more than doubled from the already elevated February print of $14.2 billion to a stunning $31.4 billion, the highest print on record... just in time for those credit card APR to start moving higher, first slowly and then very fast.

Yes, you read that correctly; credit card debt doubled and then some from February to March.

The best explanation, in my view, is that consumers are forced to borrow money or use credit to meet their household living expenses.

That is a trend that is also unsustainable.

A reversal of these unsustainable trends is inevitable.

This week’s radio program and podcast features an interview with Mr. Karl Deninger, of market-ticker.org.  I chat with Karl about what he sees the Fed doing moving ahead and his forecast for markets.   You can listen now by clicking on the "Podcast" tab at the top of this page.