Interestingly, the rally in metals occurred after the inflation report came in cooler than expected.  This from “Zero Hedge” (Source:  https://www.zerohedge.com/personal-finance/core-cpi-inches-lower-40-year-highs-real-wages-tumble-19th-straight-month) 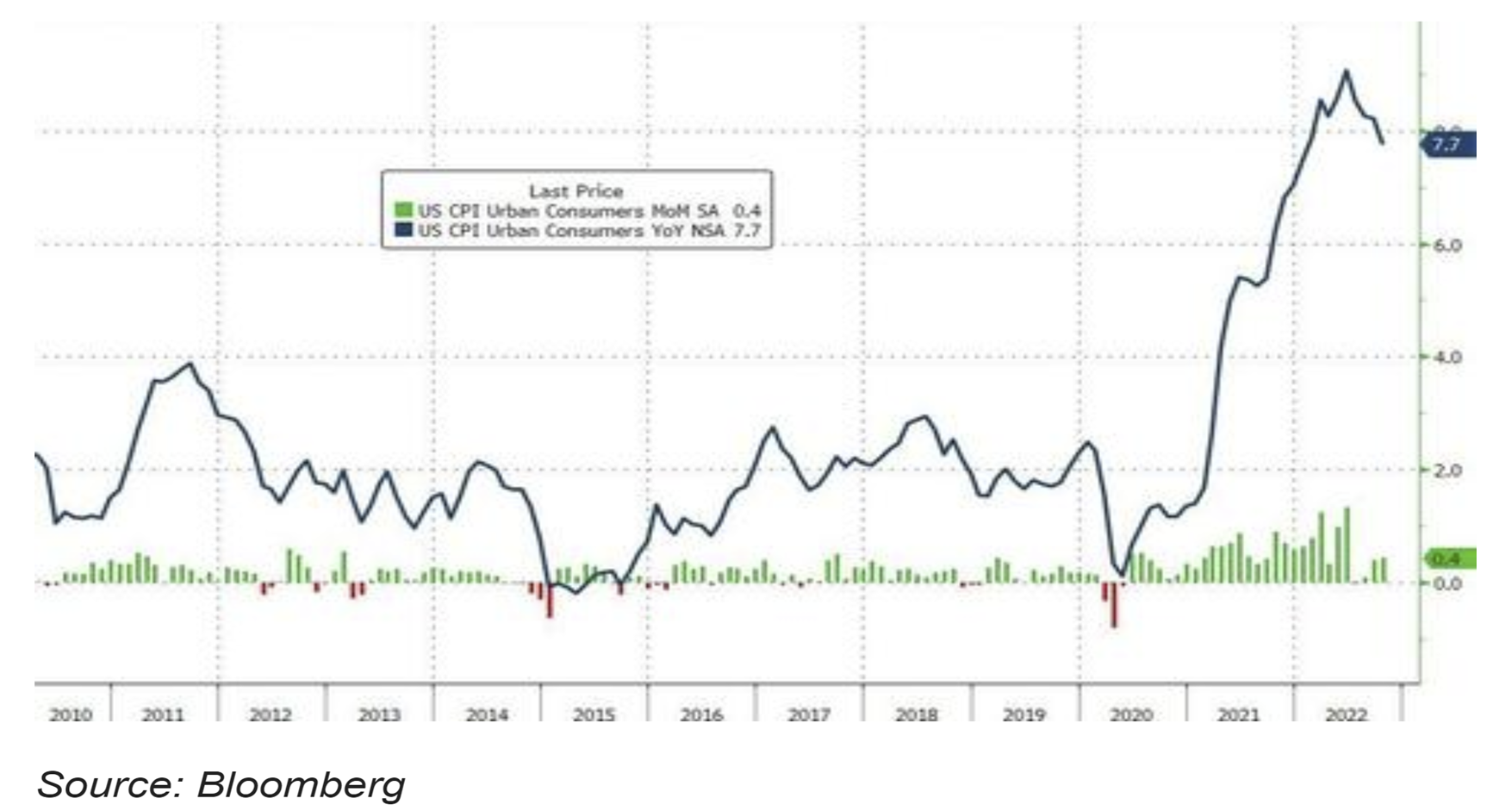 The official measure of inflation, the consumer price index, is a heavily manipulated number using ‘adjustments’ like weightings, hedonic adjustments, and substitution to make the reported number seem more favorable.

There are other alternative measures of inflation that are, in my view, more accurate in tracking the real inflation rate.  One such measure is calculated by economist, John Williams, of www.ShadowStats.com. 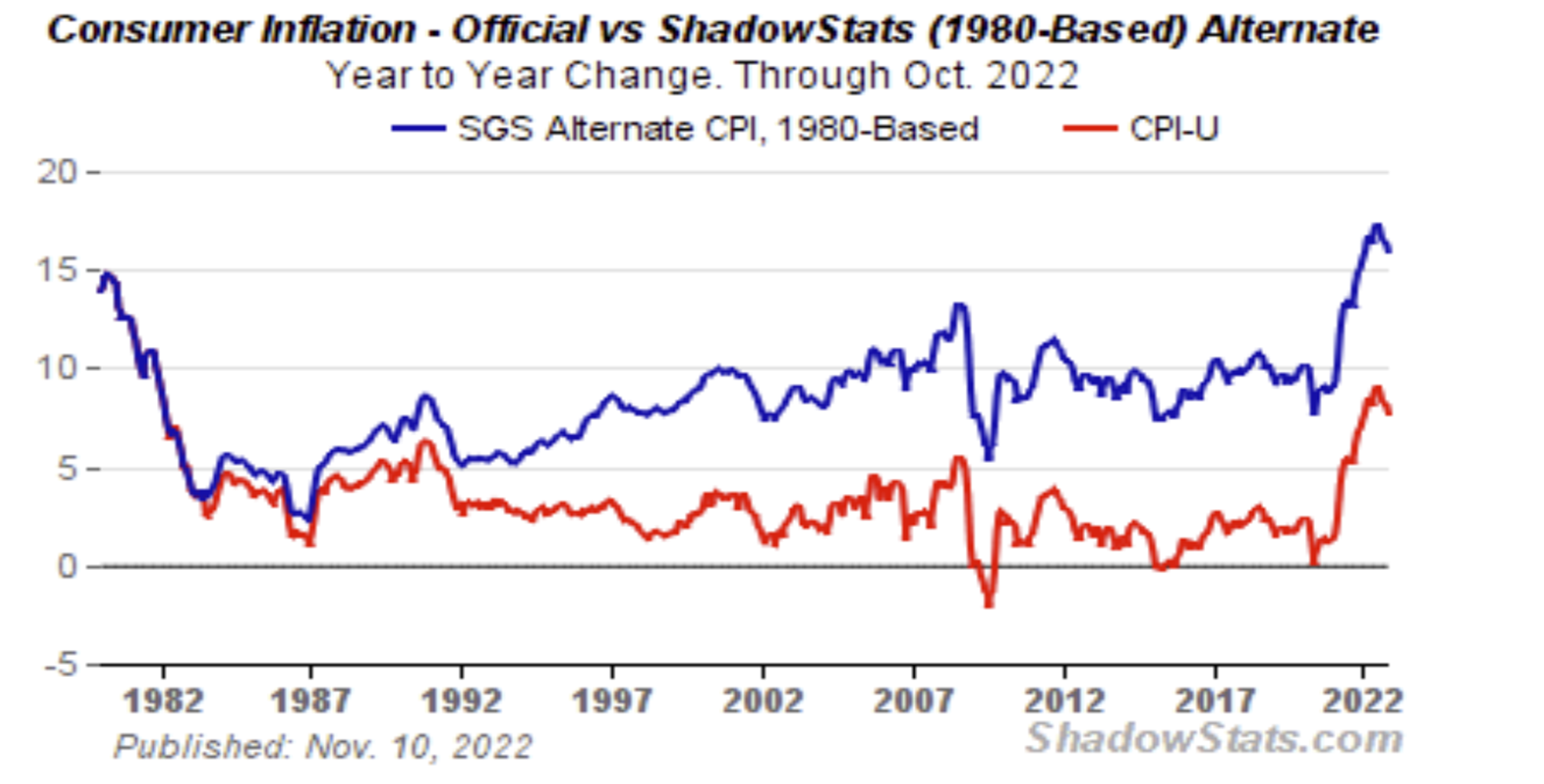 Which brings us to the most important question – does this mean that the Fed is finally getting inflation under control?

Probably not in my view.

As I have stated many times previously, in order to get inflation under control, we need to have real positive interest rates.  In other words, interest rates need to be higher than the inflation rate to create an incentive to save rather than spend.  In 1980, then-Federal Reserve Chair, Paul Volcker, understood this as he increased interest rates to nearly 20%.

Yet, despite interest rates not being high enough to meaningfully impact inflation, the marginally higher interest rates that we are experiencing are already creating some potential problems.  This from “Fox Business” (Source:  https://www.foxbusiness.com/politics/next-us-debt-crisis-making-hundreds-billions-interest-payments)

The U.S. national debt keeps rising and to make matters worse, interest payments on the debt are rising at an even faster pace.

Next week, the Treasury Department will release data from the final month of fiscal year (FY) 2022, including how much the government spent to service $31 trillion in national debt, the highest it has reached in U.S. history.

According to Treasury data through August, which counts all but the final month of FY22, net interest payments on the debt totaled $471 billion. That is already much higher than the initial White House projection of $357 billion and above Treasury’s mid-year assessment of $441 billion; adding in September's data could send the total over $500 billion.

At that level, interest on the debt is larger than the discretionary budgets of most federal departments and rivals the amount of money Congress gives to the Department of Defense each year.

Experts warn that one reason why the cost of servicing the debt was underestimated is because those estimates were made when interest rates were lower. For the last several months, the Federal Reserve has ratcheted up interest rates, which means when outstanding federal debt matures and is paid off through the issuance of new debt (or "rolled over"), that new debt is subject to higher interest payments.

Some say these rising rates is a major factor that will cause interest payments on the debt to explode higher in the next few years. The Peter G. Peterson Foundation warns that it is not just from other priorities.

For example, the foundation estimates that by next year, interest on the debt will soon cost more than all federal income support programs combined – programs such as unemployment, food stamps and child nutrition. Interest on the debt could soar to $1 trillion per year by 2032, or $3 billion each day and take up nearly one-fifth of all federal revenues in that year.

The numbers mentioned in the article are alarming enough when taken by themselves.  But, when taking into account the additional spending that will occur for Social Security and Medicare and other programs, the numbers are totally and utterly unsustainable.

That’s why I believe that the Federal Reserve will ultimately ‘pivot’ and begin to pursue easy money policies once again via lower interest rates and quantitative easing.

And when they do, I believe that we will see a stagflationary environment emerge that will see higher consumer prices and lower financial asset prices.  Literally the worst of both worlds.

Much of the rest of the world must agree with this assessment.  While they may not be stating this outwardly and directly, they are taking actions that indicate this is the case.  As the old axiom goes, you learn more by observing actions than you do by listening to words.

The BRICS countries are actively pursuing an alternative reserve currency to the US Dollar.  This from “Economic Times” (Source:  https://economictimes.indiatimes.com/news/economy/policy/brics-explores-creating-new-reserve-currency/articleshow/94628034.cms)

The BRICS countries are exploring establishing a new reserve currency to better serve their economic interests, according to senior Russian diplomat and BRICS points person Pavel Knyazev. It will be based on a basket of the currencies of the five-nation bloc, ET has learnt.

"The possibility and prospects of setting up a common single currency based on a basket of currencies of the BRICS countries is being discussed," Knyazev, Russian Sou Sherpa on BRICS said during a discussion at Valdai Club in Moscow last week. Valdai is closely associated with President Vladimir Putin.

The radio program and podcast this week features an interview with Dr. A. Gary Shilling.

Dr. Shilling is a respected money manager and financial columnist who is predicting more downside for stocks.  You won’t want to miss my conversation with him. Click the "Podcast" tab at the top of this page to listen to the show now.