With the US election still dominating headlines, we scoured the news this past week and found some stories we thought we’d share and ponder.

The big news this past week was the announcement by Pfizer that they had developed a Coronavirus vaccine that is 90% effective.  43,000 people around the world have been tested according to the company.  (Source:  https://www.foxnews.com/health/pfizer-vaccine-coronavirus-texas-side-effects-volunteer)

As noted on the chart, Pfizer stock opened much higher on the news but has been declining since as this issue of “Portfolio Watch” is being written. 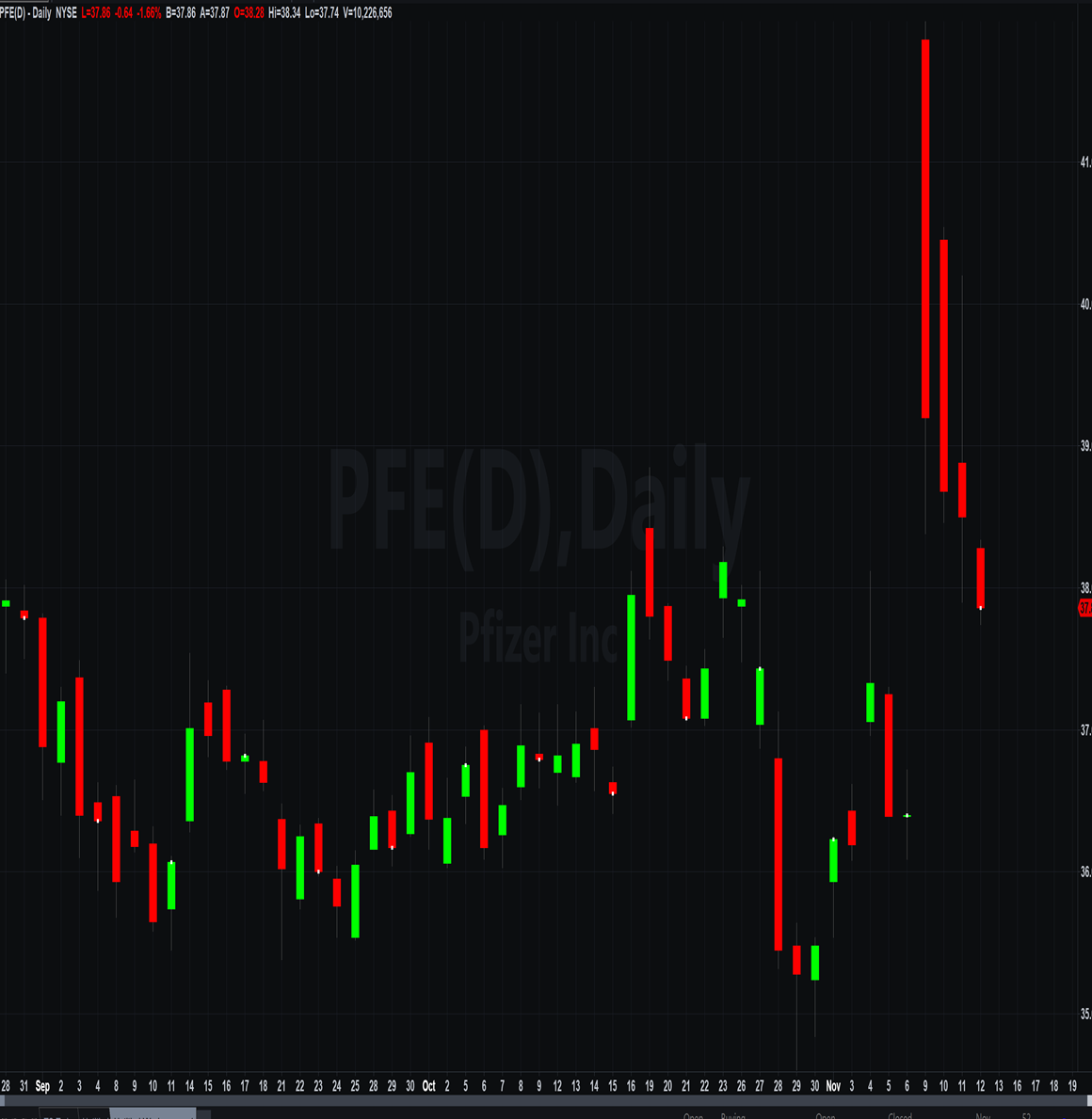 The stock’s closed on Friday at $36.39 per share and then opened Monday at $41.86 after the vaccine news was announced.  That’s a move of 15% - significant and not surprising given how highly anticipated the vaccine announcement was.

Setting aside the skepticism of the timing of the announcement as many political analysts have done, we are zeroing in on another angle of this story.

Seems that Pfizer CEO, Albert Bourla, sold more than 60% of his Pfizer shares on Monday the same day the vaccine announcement was made.  This from “International Business Times” (Source:  https://www.ibtimes.com/pfizer-ceo-sold-shares-worth-56m-day-company-unveiled-promising-covid-19-drug-3080914) (emphasis added):

Pfizer CEO Albert Bourla sold nearly 60% of his stock in the company the day it announced promising efficacy rates of its COVID-19 vaccine in clinical trials.

The shares of Pfizer and BioNTech surged when preliminary data from their drug tests revealed a more than 90% efficacy rate.

Bourla sold as many as 132,508 Pfizer shares at a price of $41.94, which brings the total sale to nearly $5.6 million, according to the company’s filing with the SEC. The 52-week high for Pfizer’s stock is $41.99, which means Bourla sold the shares at almost its highest price.

Reports suggest that this sale was part of a preapproved plan under which major shareholders and members of listed corporations trade a ‘predetermined’ number of shares at a decided time.

A CNN report quotes a Pfizer spokesperson saying that the sale of shares happened because the stock hit a predetermined price as part of a plan managed by third-party stock administrators, signed off by Bourla on Aug. 19.

On Monday, Sally Susman, executive vice president at Pfizer, also sold nearly 42,600 shares at the same price in a transaction worth $1.8 million. This was also said to be part of a prearranged plan.

It is not uncommon for executives to sell their shares and branch out in their investment processes, but it is usually timed in a way so it does not seem that they are cashing in on a sudden boost in their company stocks.

If you were CEO of a company that had just developed an effective vaccine for Coronavirus, why would you sell more than 60% of the stock in your company?

It’s a fair question and one that prospective investors should consider and answer to their own satisfaction.

While pre-arranged plans to sell stock do exist, it seems that if Mr. Bourla had confidence in the vaccine, he would not be selling shares.

While we don’t have the definitive answer to this question at this point, you can put us in the skeptical category.

In other news, for those of you who have been enjoying the autonomy and convenience of working from home, there is a chance that you may soon be paying for the privilege.

Deutsche Bank recently proposed that a ‘work at home’ tax should be considered.  To be fair, this has not yet been proposed by any entity other than Deutsche Bank as far as we know, nevertheless, it should be on your radar.  This from “Zero Hedge” (Source:  https://www.zerohedge.com/markets/deutsche-bank-proposes-5-work-home-tax) (emphasis added):

At a time when the Fed is already monetizing the entire US budget deficit thanks to helicopter money, sparking conversations about the utility of taxation, and when a Biden administration is set to at least try and roll back most of the Trump tax cuts, the last thing the population wants to hear about is even more taxes.

Yet in a "modest proposal" from Deutsche Bank, the bank argues that in a time of pervasive covid shutdowns, "those who can work from home (WFH) receive direct and indirect financial benefits and they should be taxed in order to smooth the transition process for those who have been suddenly displaced."

In other words, the argument goes that working from an office is somehow punitive, and since WFH during the pandemic leads to "many benefits" as a resulting "disconnecting themselves from face-to-face society" a 5% tax for each WFH day "would leave the average person no worse off than if they worked in the office." The bank calculates that such a tax could raise $49bn per year in the US, €20bn in Germany, and £7bn in the UK. "That can fund subsidies for the lowest-paid workers who usually cannot work from home."

In the report written by DB strategist Like Tumpleman, he argues that the popularity of WFH was growing even before the pandemic: "between 2005 and 2018, internet technology fuelled a 173 per cent increase in the number of Americans who regularly worked from home. It is true that the overall proportion of people working from home before the pandemic was still small, at 5.4 per cent based on census data, but the growth was still way ahead of the growth in the overall workforce."

Naturally, the covid shutdowns have turbocharged that growth, and as a result the proportion of Americans who worked from home increased ten-fold to 56% during the pandemic. Many of these people will continue to work remotely for some time. Indeed, two-thirds of organizations say that at least three-quarters of their staff can work from home effectively, according to S&P Global Markets. Meanwhile, a DB survey shows that, after the pandemic has passed, more than half of people who tried out WFH want to continue it permanently for between two and three days a week.

This sudden shift to WFH means that, for the first time in history, "a big chunk of people have disconnected themselves from the face-to-face world yet are still leading a full economic life" as if that is somehow a bad thing.

Finally, as we predicted in the spring, consumer credit card use has once again increased.  When the initial Coronavirus-related lockdowns were implemented and stimulus checks were distributed, credit card debt declined.  Our take at the time was that it was a temporary aberration.

Now it seems that is the case.  This from “Real Investment Advice” (Source:  https://realinvestmentadvice.com/the-housing-debt-bubble-is-going-to-burst/) (emphasis added):

Credit card usage by renters increased by 70% last spring. As renters received stimulus payments, the rate dipped to 50%. However, the credit card payment rate has risen to 65% due to the end of stimulus assistance.

Consumers building credit card debt while unemployed or on reduced income assistance is unsustainable. Many consumers will be unable to make their credit card payments. Defaulting on their credit cards will hurt their credit score and make it more difficult to obtain other housing because they have an eviction record. A surge in credit card defaults will increase losses for credit card issuing banks as well. Today, missed rent payments force millions of small business landlords to fall behind in their mortgage payments.

This week’s radio program features an interview Karl Denninger.  We chat with Karl about the US election results, the virus, and the future of healthcare.

It’s a lively discussion that you won’t want to miss.

The interview is now available on the podcast which you can access through e RLA app.

“When I was growing up they used to say, “Robin, drugs can kill you.”  Now that I’m 58, my doctor tells me, “Robin, you need drugs to live.”  I realize now that my doctor is also my dealer.”