Despite the recent rally in stocks, when analyzing longer-term price charts, it is my view that stocks remain in a downtrend at this point in time.

As I have often stated in this publication, it is rare that any market moves straight up or straight down.  Instead, a downtrend is typically characterized by a series of lower highs and lower lows.  Note the price action on the weekly price chart of an exchange-traded fund that tracks the price action of the Standard and Poor’s 500. 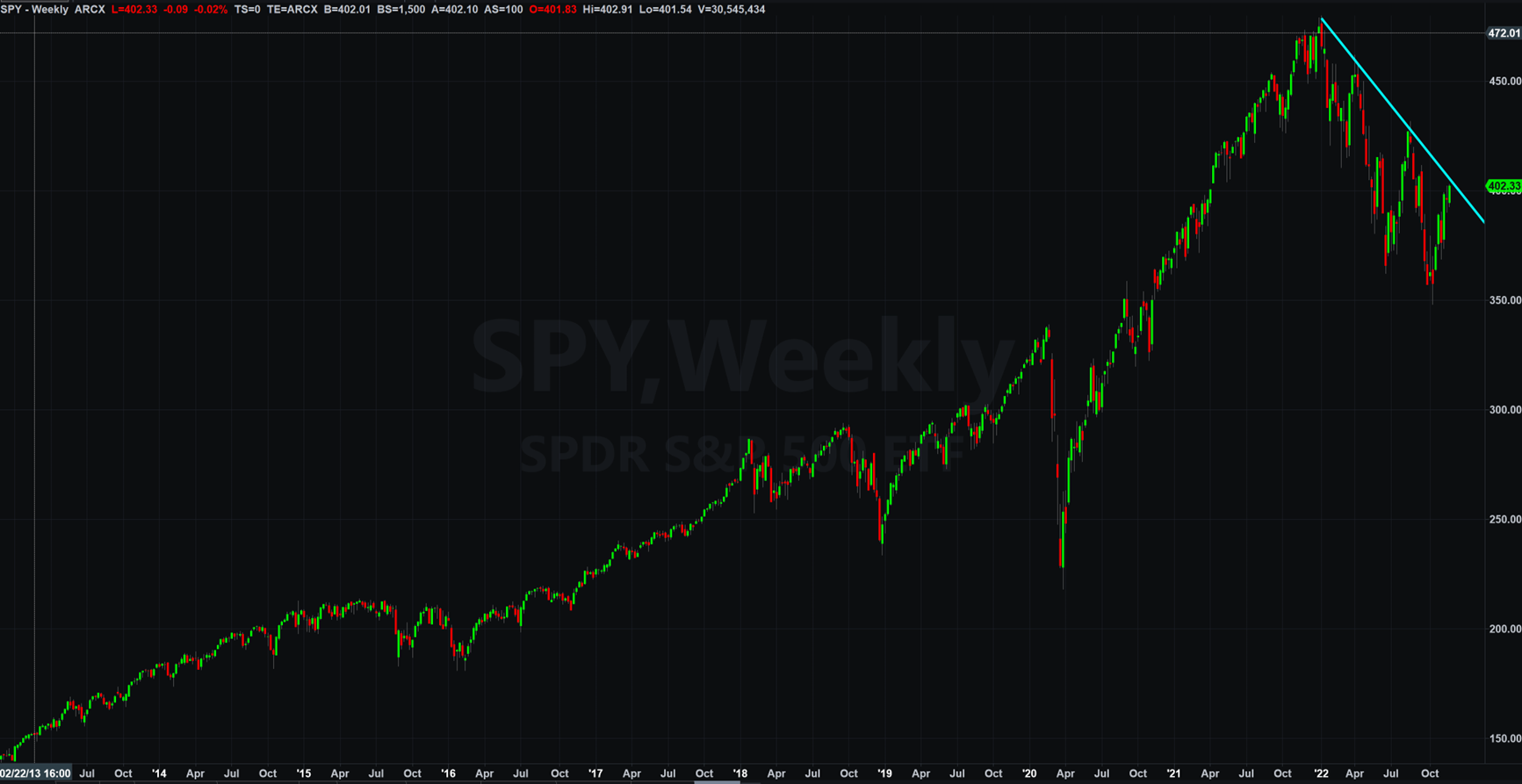 Notice the downtrend line that I have drawn on the price chart.  It is a textbook downtrend trendline.  As is easily seen by the price chart, there is a downward price trend channel on the chart.

Until this downtrend price channel is broken to the upside convincingly, I expect more downside in stocks.

From a fundamental perspective, stocks remain overvalued.  One of the most commonly used valuation metrics for stocks is a tool that is now known colloquially as “The Buffet Indicator” ever since the Oracle from Omaha stated in an interview it was his favorite indicator to use to determine if stocks are overvalued or undervalued. 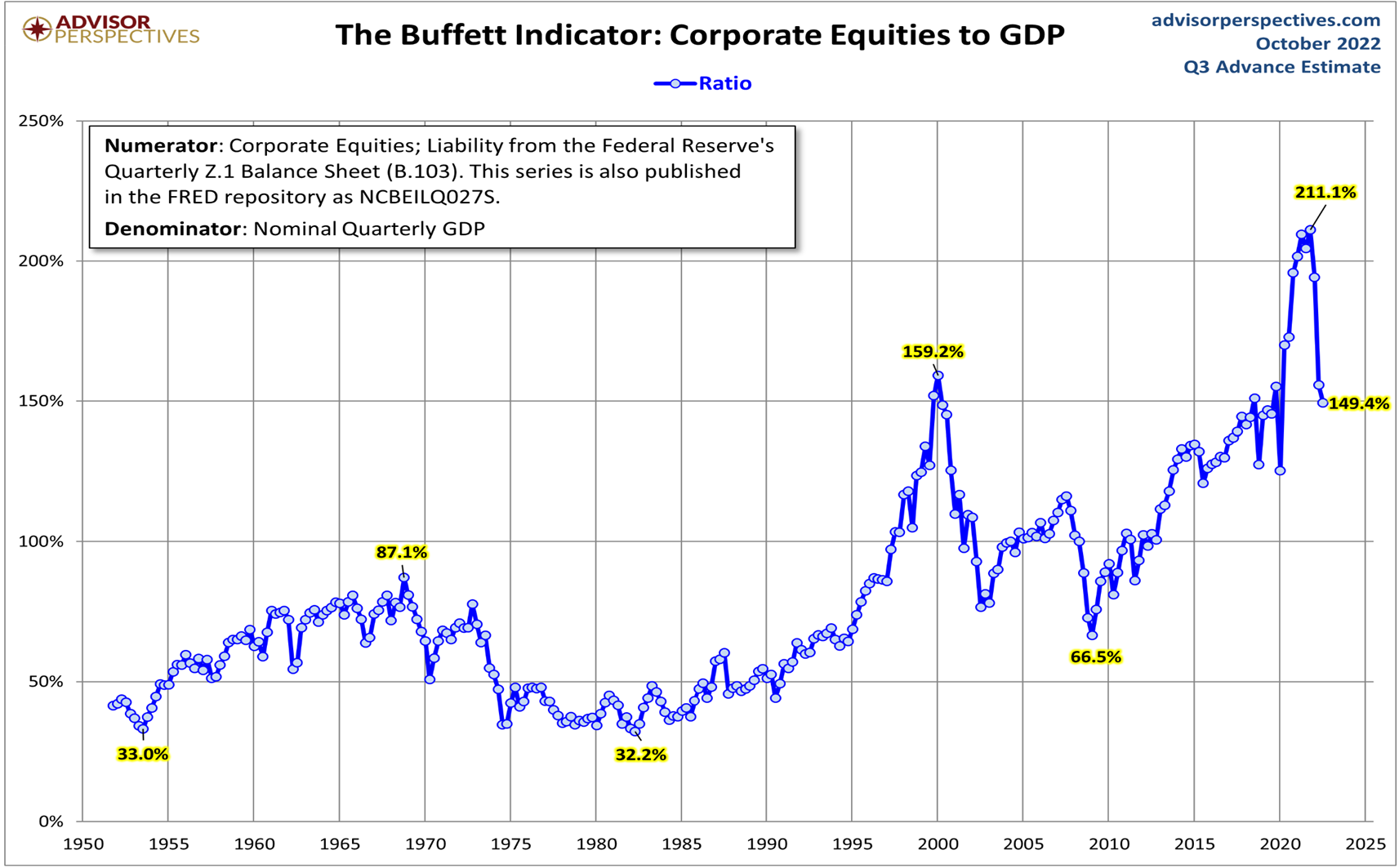 Notice that stock valuation levels are slightly lower than they were prior to the tech stock bubble imploding about two decades ago and much higher than at the time of the financial crisis.  As you probably recall, stocks fell more than 50% in both of those prior time frames.

That tells us that despite the miserable year in stocks that we have just experienced, there is likely more downside ahead.

Meanwhile, the economic news indicates a generally sluggish economy that is being adversely impacted by continued inflation.  Black Friday, the most anticipated retail sales day of the year saw most retailers struggling through what should have been their best day of the year.  The exception to this were stores that were deeply discounted merchandise.  This from “Breitbart” (Source:  https://www.breitbart.com/economy/2022/11/25/black-friday-disappoints-thin-crowds-and-desolate-stores/)

The busiest shopping day of the year is not as busy as retailers hoped.

Across the U.S., shopping malls are seeing only thin crowds, according to reports in business media. Inflation and depressed consumer sentiment appear to have dampened the holiday shopping spirit.

At Times Square in New York City, which was cloudy with occasional light rain, employees were seen waiting inside stores for crowds that so far had not arrived.

Outside the American Dream mall in East Rutherford, New Jersey, there were no lines outside stores. A ToysRUS employee was seen walking around the mall handing out flyers with a list of the Black Friday doorbusters.

Around 10:30 am at Crossgates Mall in Albany, New York, the ultra-low-cost brands and the higher-end buzzy retailers had the most foot traffic, while the middle-market stores were desolate.

Gap Inc.-owned Old Navy, which was offering 60% off most items, had a line so long that some shoppers turned around as soon as they entered the store. Athleisure favorite Lululemon Inc., which had only a few racks of discounted merchandise, and American Eagle Outfitters Inc.-owned Aerie, a popular intimates brand among Gen Z shoppers, also drew big crowds.

Meanwhile, stores like Banana Republic, Macy’s, and Urban Outfitters had no lines at all, and only a handful of shoppers.

Overall, the National Retail Federation has forecast that retail sales will be up six to eight percent this year compared with last year. That is a big slowdown from last year’s 13.5 percent increase and the 9.3 percent rise in 2020. After adjusting for inflation, sales may actually be down. The Consumer Price Index is up 7.7 percent compared with a year ago.

November saw a significant decline in consumer sentiment, according to the University of Michigan’s survey. The index of consumer sentiment fell five percent below the October reading, reversing about one-third of the gain since the historic low in June. The gauge of current conditions dropped by 10.4 percent.

That is bad news for a consumer spending-dependent US economy.

While retail is slow, as I have forecasted, the housing market is continuing its slow-motion crash.  Homebuyer confidence is now at a record low going back to 1985 as the chart below from “Zero Hedge” shows (Source:  https://www.zerohedge.com/economics/housing-market-obliterated-pending-home-sales-post-record-drop-deal-cancelations-price) 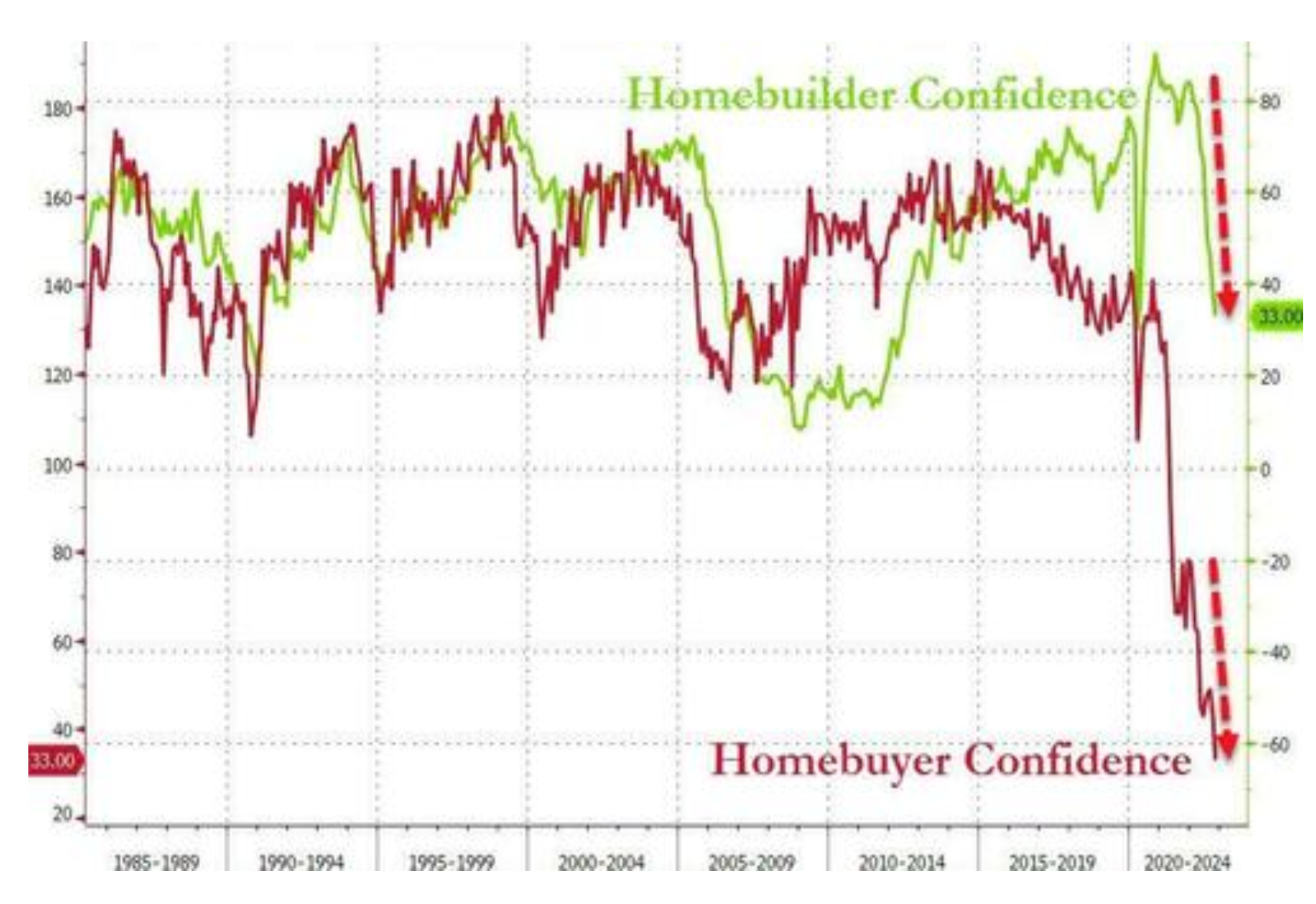 The radio program and podcast this week features an interview with Simon Popple, publisher of the Brookville Capital Intelligence Report. I talk with Simon about his soon-to-be-released new book “Investing in a Recession: Why I Like Gold.”

You can listen to the conversation now by clicking on the "Podcast" tab at the top of this page.

“You will never reach your destination if you stop and throw stones at every dog that barks.”