The Federal Reserve announced a $15 billion per month taper and markets rallied.

All markets rallied as noted in the databox above; stocks, bonds, and precious metals all moved higher.

The Dow to Gold ratio remained in the neighborhood of 20.  I stand by the forecast of an ultimate ratio value of 1 or 2.

In the “Headline Roundup” today, I discussed the anatomy of inflation.  Despite the fact that the Federal Reserve continues to describe the high level of inflation as transitory, it seems that it is here to stay.

The taper announced by the Fed while leaving interest rates unchanged is, in my view, more symbolic than substantive.

I expect that at the first sign of market distress, the Fed will reverse course and make the ‘adjustments’ they stated were possible in their taper announcement.

Assuming I am correct, today’s discussion of the anatomy of inflation could especially relevant.  In the article, “Is the World About to Be Weimared?”, the author describes the progression of inflation or hyperinflation.  (Source: https://www.pgurus.com/is-the-world-about-to-be-weimared/#)

The author also discusses the probable political outcome of such a hyper-inflationary event pointing to the Weimar, Germany hyperinflation and the rise of an authoritarian government.

History points to this political outcome time after time.

Extreme economic circumstances have the populace embracing extreme political solutions that often turn out to not be solutions at all.  That was the case in Weimar, Germany and we can all hope and pray that is not the solution presently should the current inflationary climate evolve into an environment that is hyperinflationary.

To prevent such an outcome, it’s important to understand the inflationary cycle.  The author of the article referenced above published a chart that does a good job of explaining the cycle.

As you’ll note from the chart, the first stage in what the author describes as the inflationary death-spiral is the development of the attitude that “deficits don’t matter”. 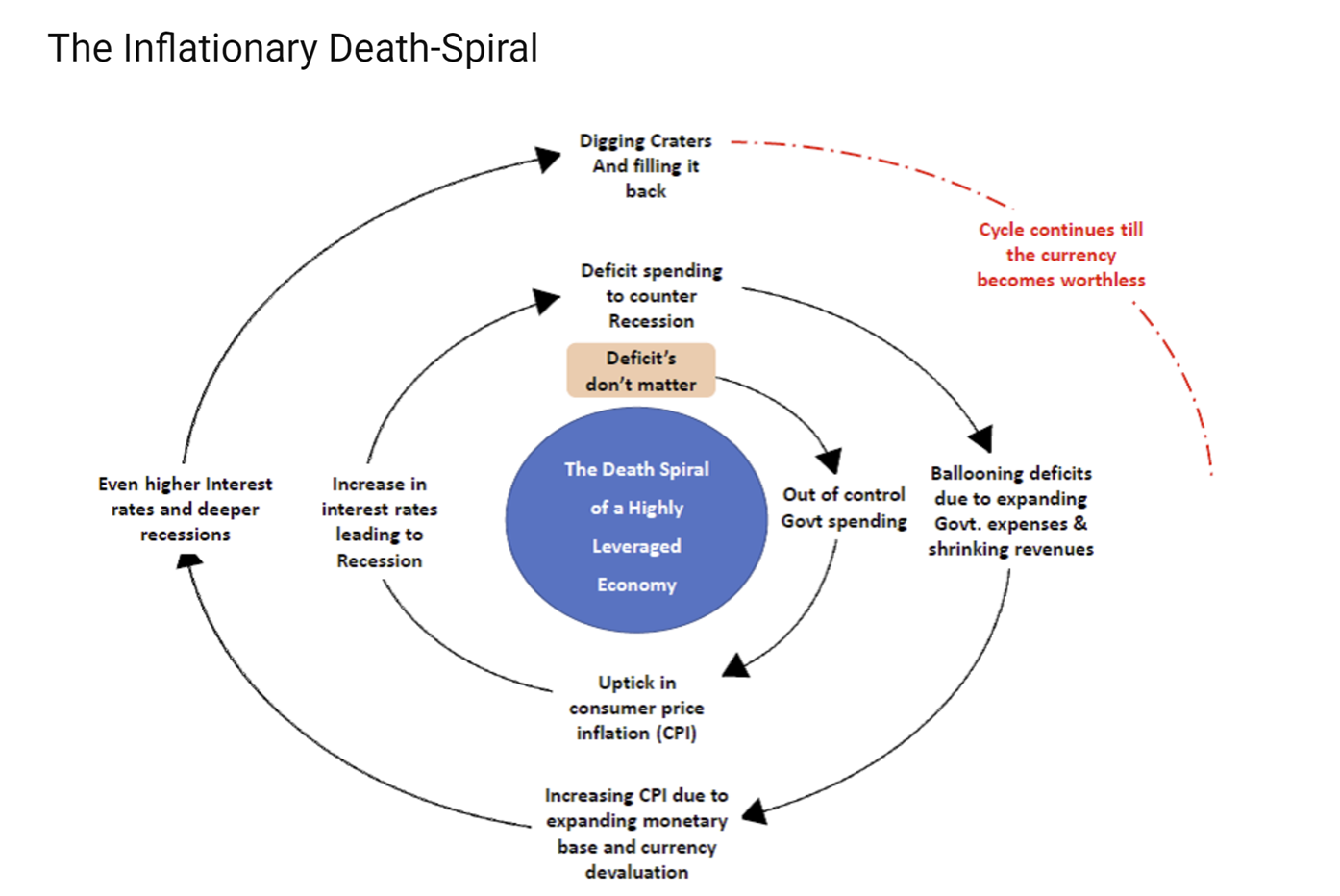 This attitudinal change among the ruling class is almost necessary since government spending is out of control and balancing a budget would require significant pain and a huge amount of public sacrifice, both of which are politically unpopular.

Here is a bit from the article (emphasis added):

“Given above is the typical scenario of how “well-meaning” governments end up causing depressions and high inflations.  Starting out in a benign commodity cycle where the monetary inflation does not directly translate into consumer price inflation, governments reach the absurd but very convenient conclusion that “deficits don’t matter”.  The Keynesian stimulus appears to work under these conditions and the governments get away scot-free from their monetary sins.  Albeit temporarily.”

In my view, this accurately describes the time frame from 2011 to 2019.  The Federal Reserve was creating currency and expanding the money supply, a.k.a monetary inflation, but the only apparent inflation was that of asset prices like stocks and real estate.

“When the payback time arrives, and it always does without exceptions, the monetary stimulus has the effect of pushing on the strings from a “growth” perspective.  The higher deficits translate into consumer price inflation while the growth seems to falter.  The currency weakens, there are greater trade deficits and the recessions and consumer price inflation both worsen.  Stagflation, Misery Index (unemployment + inflation) are some of the more commonly used phrases to describe these economic conditions and this is where the US, and perhaps the world at large is headed in the immediate future.”

I would argue this is where we are presently.  The US just recorded the largest trade deficit in history due in large part to importing a lot more energy than just a year ago.  This from “United Press International”  (Source:  https://www.upi.com/Top_News/US/2021/11/04/trade-deficit-809-billion-imports-exports/2021636046685/):

And, even using the highly manipulated Consumer Price Index measure of inflation, consumer price inflation is at levels not seen in years while economic growth is slowing.

The next stage of the inflationary death spiral is described in the article (emphasis added):

Of course, the US Fed neither believes in the transitory nature of the CPI nor in the “strong economy” opinion that they voice in the public domain.  The only reason why the US Fed has not raised the interest rates is that they understand the inflationary death spiral that the US economy/dollar is about to enter.  Let’s say the Fed manages to hike the rates to a very nominal 1%.  That would still leave the real interest rates negative by a massive 4%.  But this 1% interest rate would deliver a devastating blow to both the housing and bond hyper-bubble markets that the US economy cannot possibly hope to recover from.

That would indeed set off a chain reaction of a recession forcing the government to step in with a big stimulus which would lead to even higher CPI.  In fact, this is exactly the same phenomenon that we have witnessed in many banana republics but perhaps for the first time, we will witness this happening to the world’s reserve currency in the years ahead.

In other words, once this cycle begins, it is self-feeding.

The chart on the right illustrates the amount of currency created by the Federal Reserve.  Notice in calendar year 2020, the expansion of the money supply went nearly vertical and has continued for about two years.

The next chart below shows the level of currency creation in Weimar, Germany after World War I.  Notice the eerily similar chart patterns with the currency creation that led to hyperinflation and the destruction of the German Mark occurring largely over a two-year time frame. 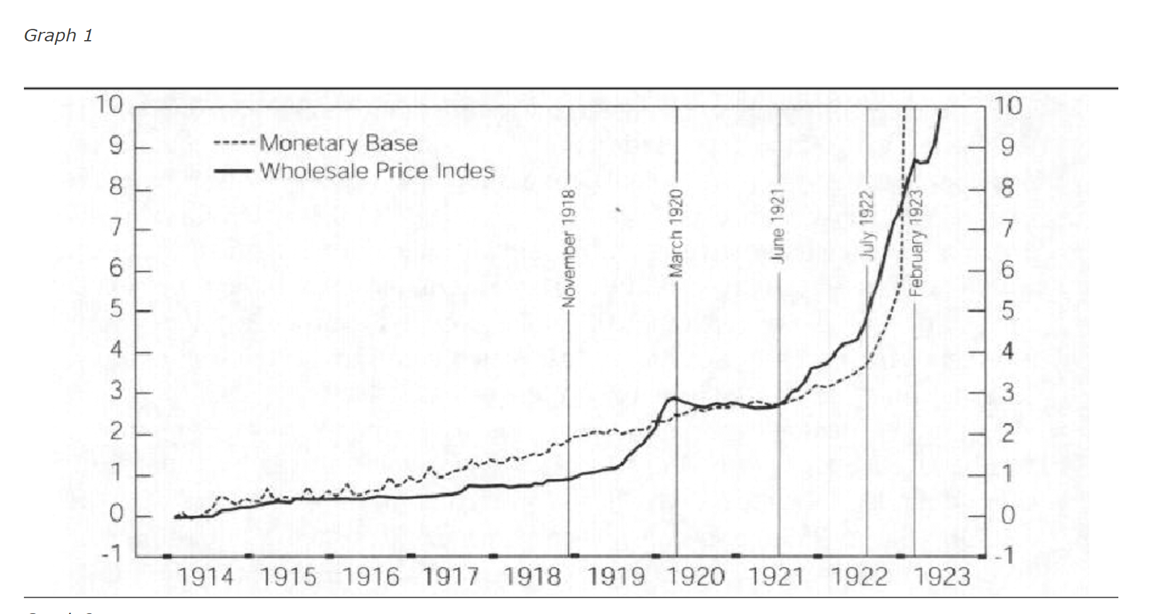 The Fed has arguably already created enough currency for a hyperinflationary outcome.

The difference between the German Mark of Weimar, Germany, and the US Dollar of today is that the US Dollar is still used as a reserve currency.

It is my view that without that status, we would perhaps already be experiencing a hyperinflationary climate similar to that of Germany after World War I.

As I noted last week in “Portfolio Watch”, the only way to solve this problem is a balanced federal budget so currency creation is unnecessary.  Given the recent passing of a monster infrastructure spending package that adds to the level of deficit spending, we are moving in a fiscal direction that almost ensures the inflationary death spiral continues.

This week’s radio program is an interview with Mr. Karl Denninger author and blogger.  I talk to Karl about the real cause of the supply chain disruptions and his inflation forecast for the next 18 months.

It’s a thought-provoking conversation you don't want to miss.  Click the "Podcast" tab at the top of this page now to listen to the show.