Last week in the markets was the polar opposite of the prior week.  All markets, with the exception of the US Dollar and the US Treasury long bond, were higher.

In our October client newsletter, we discussed the recent payment by JP Morgan Chase to settle criminal and civil charges that the company manipulated the precious metals markets.  This is a preview from the October “You May Not Know Report” newsletter that will be mailed next week.

JP Morgan Chase agreed to pay $920 million to settle civil and criminal charges after Federal agencies alleged the firm made fake trades in the precious metals markets6.  This from an article published in “The Daily Mail” (emphasis added):

JPMorgan Chase will pay a record $920million to settle US civil and criminal charges over fake trades in precious metals and Treasury futures designed to manipulate the market, US agencies announced Tuesday.

The settlement comes as the US banking giant reached a deferred prosecution agreement with the Justice Department to resolve criminal fraud charges over the long-running schemes.

In one of the schemes, JPMorgan traders in New York, London and Singapore between 2008 and 2016 commissioned tens of thousands of orders for gold, silver, platinum and palladium futures that were placed in order to be canceled to deceive other market participants, the Department of Justice (DOJ), one of three agencies involved in the case, said in a press release.

As a recent “Zero Hedge” article7 pointed out, it wasn’t that long ago that if anyone even mentioned the possibility of a market being manipulated, they would quickly be branded a conspiracy theorist.  This from the piece (emphasis again added):

There was a time when the merest mention of gold manipulation in "reputable" media was enough to have one branded a perpetual conspiracy theorist with a tinfoil farm out back. That was roughly coincident with a time when Libor, FX, mortgage, and bond market manipulation was also considered unthinkable when High-Frequency Traders were believed to "provide liquidity", when the stock market was said to not be manipulated by the Fed, and when the ever-confused media, always eager to take "complicated" financial concepts at the face value set by a self-serving establishment, never dared to question anything.

All that changed in November 2018 when a former JPMorgan precious-metals trader admitted he engaged in a six-year spoofing scheme that defrauded investors in gold, silver, platinum, and palladium futures contracts. John Edmonds, then 36, pled guilty under seal in the District of Connecticut to commodities fraud, conspiracy to commit wire fraud, commodities price manipulation, and spoofing, a trading technique whereby traders flood the market with "fake" bids or asks to push the price of a given futures contract up or down toward a more advantageous price, and to confuse other traders or HFTs which respond to trader intentions by launching momentum in the other direction. As FBI Assistant Director in Charge Sweeney explained at the time, "with his guilty plea, Edmonds admitted he intended to introduce materially false and misleading information into the commodities markets."

A little more than a year later, former Deutsche Bank precious metals trader David Liew sat in a federal courtroom telling a jury about how he learned to 'spoof' markets from his colleagues, and that he considered the behavior to be "OK" because it was "so commonplace." Unfortunately for him, federal authorities didn't see it that way and have aggressively prosecuted the big dealer banks for market manipulation across a variety of markets. His testimony led to convictions for two of his former coworkers. A few days later, JP Morgan agreed to settle similar allegations with a record $1 billion fine, netting another major victory for the government in the nearly decade-long campaign to root out manipulation from the precious metal markets.

We have discussed our belief that there has been manipulation in markets for several years.  Given the easy money policies in which central banks have been engaging, it’s logical that outside sources have at the very least influenced precious metals’ prices.

The fundamentals for precious metals are strong.  Radical easy money policies dictate that some of a prudent investor’s portfolio be allocated to metals.

Past RLA Radio show guest, Alasdair Macleod published an article this past week in which he updated his views on the ultimate outcome of these policies.  This from his piece (emphasis added):

The purpose of monetary inflation is always stated by central banks as being to support the economy consistent with maximum employment and a price inflation target of two percent. The real purpose is to fund government deficits, which are rising partly due to higher future welfare liabilities becoming current and partly due to the political class finding new reasons to spend money. Underlying this profligacy has been unsustainable tax burdens on underperforming economies. And finally, the coup de grace has been administered by the COVID-19 shutdowns.

The effect of monetary inflation, even at two percent increases, is to transfer wealth from savers, salary-earners, pensioners, and welfare beneficiaries to the government. In no way, other than perhaps from temporary distortions does this benefit the people as a whole. It also transfers wealth from savers to borrowers by diminishing the value of capital over time.

Mr. Macleod published a chart in his piece that shows how the money creation trajectory has gone “almost off the chart”…..literally. 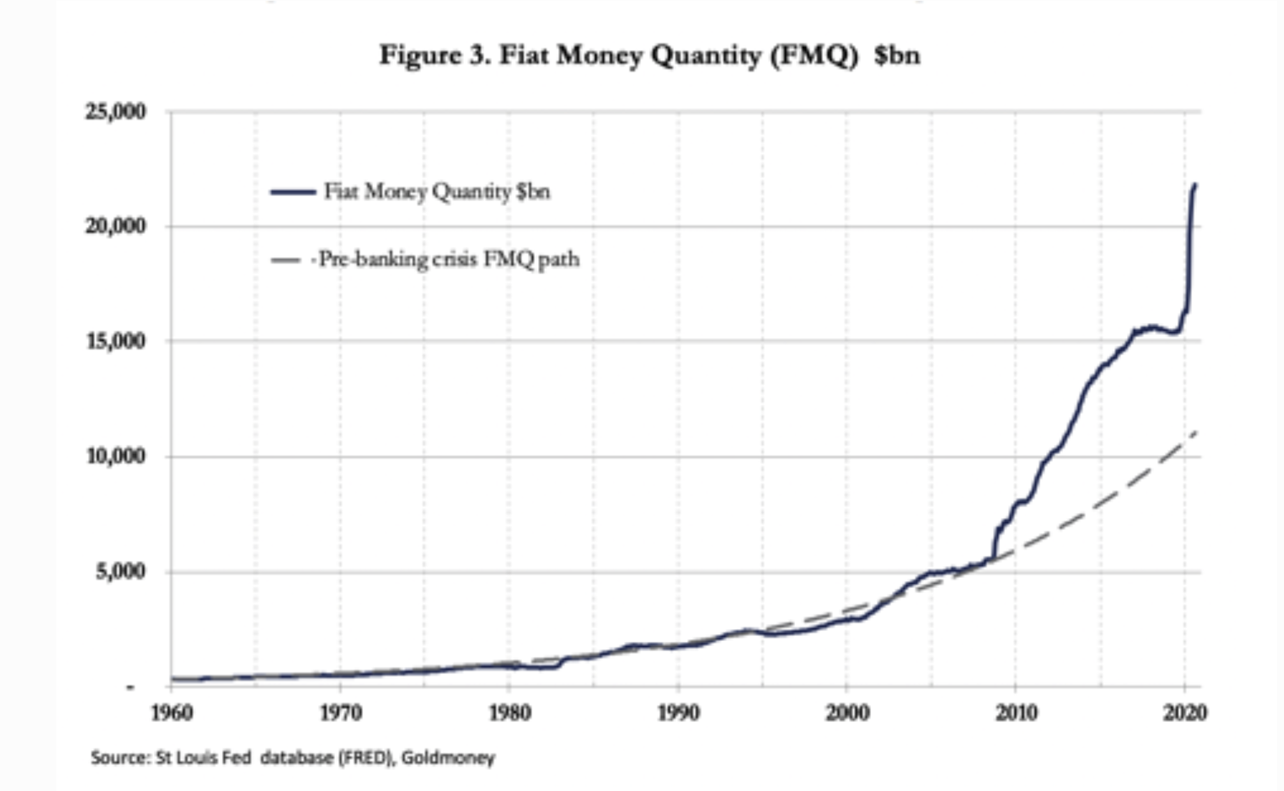 One can study any chart pattern with such a vertical or parabolic pattern and quickly ascertain that such patterns always reverse.  While the timing of such a reversal is impossible to determine, we can say with a high degree of confidence that such a chart pattern is not sustainable for any longer period of time.

It can be seen that the rate of FMQ’s growth was fairly constant over a long period of time — 5.86% annualized compounded monthly to be exact — until the Lehman crisis when the rate of growth then took off. Since Leman failed in 2008 FMQ’s total has grown by nearly 300%.

Since last March growth in the FMQ has been unprecedented, becoming almost vertical on the chart, triggered by the Fed’s response to the coronavirus. And now the second wave of it has hit Europe and the early stages of a resurgence appear to be hitting the land of the dollar as well. With lingering hopes of a V-shaped recovery being banished, a further substantial increase in FMQ is all but certain.

Already, FMQ exceeds GDP. If we take the last time things were normal, say, in 2005 when the US economy had recovered from the dot-com crash and before bank credit expansion and mortgage lending become overblown, we see that in a functioning relationship FMQ should be between 35%—40% of GDP. But with the US economy now crashing and FMQ accelerating, FMQ is likely to be in excess of 125% of GDP in the coming months.

What is the source of all that extra money? It is raised through quantitative easing by the central bank in a system that bends rules that are intended to stop the Fed from just printing money and handing it to the government.

This action by the Fed will, we believe, be bullish for tangible assets like gold and silver.  In a prior issue of “Portfolio Watch”, we noted that China has begun to reduce her US Dollar holdings and exchange these dollars for tangible assets.  Mr. Macleod again comments (emphasis added):

China has already declared a policy of reducing her dollar investments in US Treasury bonds and is selling her dollars to buy commodities. Few realize it, but China is doing what ordinary people do when they begin to abandon a currency — dumping it for tangible goods which will cost more in the future due to the dollar’s declining purchasing power. And as the dollar’s purchasing power declines measured in commodities more nations are likely to follow China’s lead.

On this week’s radio program, our guest is Dr. Charles Nenner.  Dr. Nenner provides his forecast for stocks, bonds and precious metals based on his cycles research.  Host, Dennis Tubbergen explores where we go financially and economically since the evidence strongly suggests we are nearing the end of the credit cycle as well as the currency cycle.

The podcast is available through the RLA app.

The RLA app gives you free access to all of our resources.

“Never give up on a dream just because of the time it will take to accomplish it.  The time will pass anyway.”