When inflation first became a topic of conversation, I stated my view that unless we saw real positive, net interest rates, inflation would not be controlled.

So far, it seems, that opinion is spot on.  Despite increasing interest rates, inflation is now officially hotter than at any time in the last 40 years.  This from Wolf Richter (Source: https://wolfstreet.com/2022/10/13/services-now-drive-inflation-worst-in-40-years-services-cpi-core-cpi-show-inflation-is-entrenched-in-broad-economy-some-goods-prices-fall-gasoline-plunges/) on the topic:

Nearly two-thirds of consumer spending goes to services. And they’re now the driver of inflation. The CPI for services spiked in September for the 13th month in a row, and by the most since 1982, and it accelerated month-to-month. Housing costs spiked, but also all kinds of other services, such as health insurance (+2.1% month-to-month and +28% year-over-year). 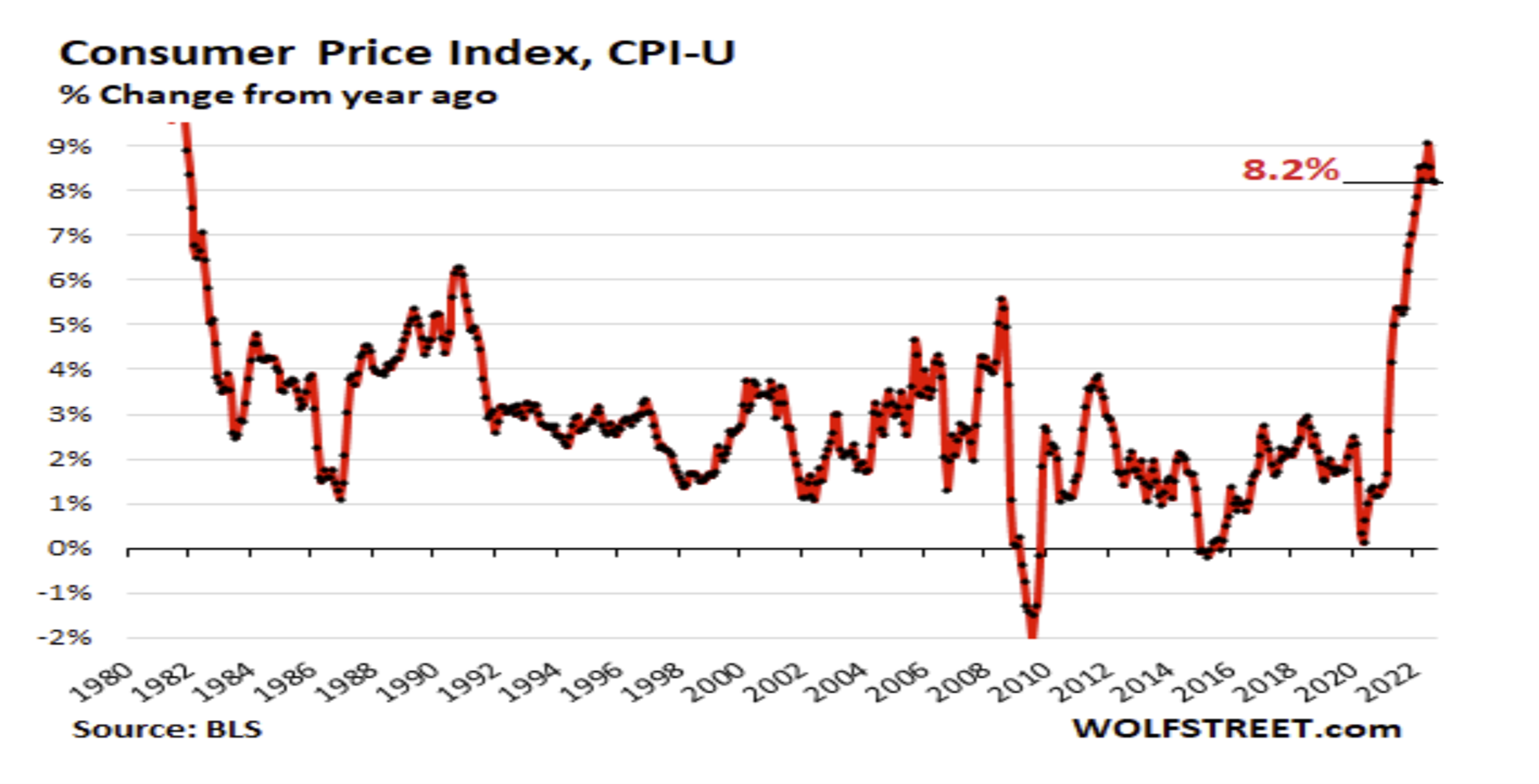 “Core CPI,” which excludes food and energy, was the worst since 1982. Food prices spiked again, but spiked slightly less than the prior month which had been the worst since 1979. But some relief came from a decline in prices of used vehicles and consumer electronics, and from gasoline, which plunged.

Overall inflation as measured by the year-over-year Consumer Price Index (CPI-U), released today by the Bureau of Labor Statistics, jumped by 0.4% in September from August, a sharp acceleration from the prior two months, and by 8.2% year-over-year. What held down overall CPI was the plunge in gasoline prices and the drop in used vehicle prices. 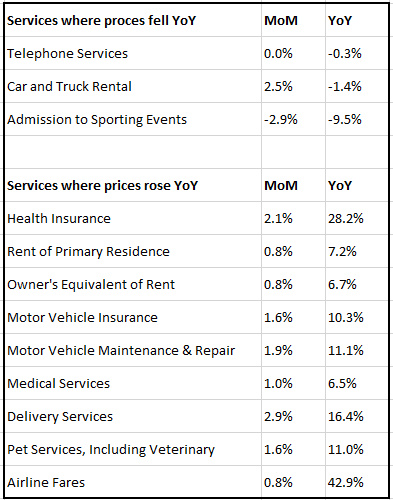 The Social Security COLA for 2023 was also determined with today’s inflation data. It is based on the average of the year-over-year increases in the Consumer Price Index for All Urban Wage Earners and Clerical Workers (CPI-W) in July, August, and September. For 2023, the COLA will be 8.7%, the highest since 1981, but in 2021 and 2022, the COLAs got crushed by raging inflation.

The CPI for services spiked by 0.7% in September from August, a sharp acceleration from the prior two months; and by 7.4% year-over-year, the worst increase since August 1982. This is where nearly two-thirds of the money goes that consumer spend, and consumers are getting whacked.

In some categories, the CPI declined on a month-to-month basis but was still up year-over-year. Note the massive month-to-month increases in insurance, medical services, motor vehicle maintenance, and delivery services.

With inflation continuing to rage, it’s not surprising that spending on some items, especially discretionary items is down.  Admission to sporting events is one good example.

It’s also not surprising that consumer spending on retail, services and other general merchandise was down in September as consumers are using more of their income to meet basic living expenses.  This from CNBC (Source:  https://www.cnbc.com/2022/10/14/retail-sales-september-2022.html):

Consumer spending was flat in September as prices moved sharply higher and the Federal Reserve implemented higher interest rates to slow the economy, according to government figures released Thursday.

Retail and food services sales were little changed for the month after rising 0.4% in August, according to the advance estimate from the Commerce Department. That was below the Dow Jones estimate for a 0.3% gain. Excluding autos, sales rose 0.1%, against an estimate for no change.

Considering that the retail sales numbers are not adjusted for inflation, the report shows that real spending across the range of sectors the report covers retreated for the month.

A Bureau of Labor Statistics report Thursday indicated that consumer prices rose 0.4% including all goods and services, and 0.6% when excluding food and energy.

Miscellaneous store retailers saw a decline of 2.5% for the month, while gasoline stations were off 1.4% as energy prices declined.

A slew of other sectors also posted drops, including sporting goods, hobby, books and music stores as well as furniture and home furnishing stores, both of which posted a -0.7% drop, while electronics and appliances were off 0.8% and motor vehicle and parts dealers fell 0.4%.

I continue to be of the opinion that the Federal Reserve will eventually choose to reverse course and once again pursue easy money policies.  While that may fuel inflation in the near-term, ultimately deflation due to massively excessive debt levels will be the primary economic trend in my view.

That’s why I also believe it's important to use the Revenue Sourcing™ planning process to manage your nest egg and plan your retirement income and allocation strategies.

Meanwhile, as we approach election day, there is another strong economic headwind being created by the Fed’s tightening policies.  Interest rates on a 30-Year mortgage now exceed 7%, up from 2.75% at the beginning of the year.  This fact reported by CNBC (Source: https://www.cnbc.com/video/2022/10/12/higher-rates-are-hitting-homebuyers-hard-30-year-fixed-rate-mortgage-over-7percent.html). 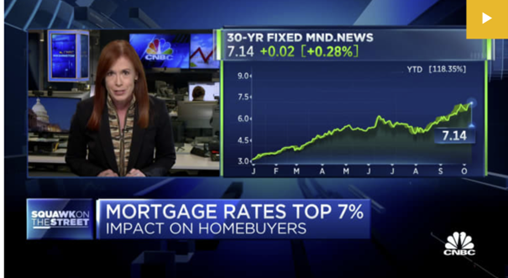 This will be a huge obstacle for the artificial economy created by Fed policy in the first place.

That’s an increase in monthly interest cost of more than $1400!

I caught up with Murray from his offices in the UK last week and got his forecast for stocks, bonds and currencies.  We also talked a little world politics and discussed the recent reversion back to currency creation by the Bank of England and what that all might mean for you.  Listen to the interview now by clicking on the "Podcast" tab above.

While there is some disagreement as to whom to attribute this quote (Mark Twain is often cited as a source), it is a fitting quote for the season in which we now find ourselves.

“Politicians are a lot like diapers, they should be changed often and for the same reason.”