The chart on this page is a daily price chart of an exchange-traded fund that has the investment objective of tracking the Standard and Poor’s 500.

There are two observations that I make from analyzing this chart that make me think the probability for lower stock prices is the most likely outcome in the near term. 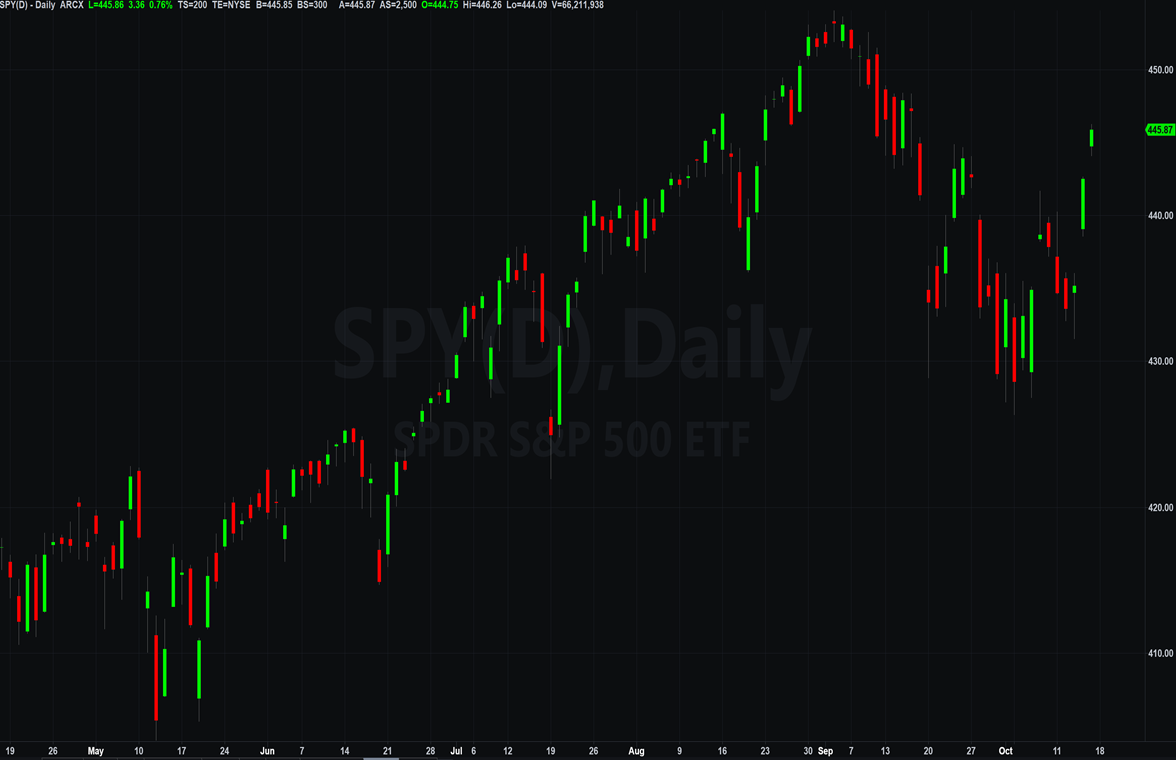 One, notice how the chart has ‘gapped up’ over the last two trading days of last week.  When gaps are observed on a price chart, they usually end up closing from my experience.  If that happens here, stock prices will have to go lower.

Two, stocks are still well below their September 2 high.  This is a classic chart pattern with the recent rally being a countertrend rally before the next wave down.

We will have to wait and see, but caution should be the order of the day in my view when it comes to holding stock positions.

From a fundamental perspective, the economy is weakening which will create more downward pressure for stocks.

On a real basis, adjusted for inflation, it is now totally evident to me that we are likely in a recession.  While we won’t know if that’s the case officially for a bit, the Bureau of Economic Analysis suggests the GDP is growing at an anemic 1%.  Economist John Williams, of the website www.ShadowStats.com, who tracks economic data using calculation methodologies that are no longer used, suggests that we are presently experiencing negative economic growth which is the definition of a recession.

Strangely, despite the weakening economy, Americans are quitting their jobs at a record rate.  4.3 million Americans quit their jobs in August (Source:  https://www.yahoo.com/now/great-resignation-led-4-3-104640881.html).  That’s a record high by far.

Looking at the period from April to August, 20 million Americans quit their jobs.  That is not a misprint.  And, it does not include retirements (Source:  https://clarion.causeaction.com/2021/10/16/20-million-americans-left-their-jobs-between-april-and-august/).

Many news outlets and analysts explain the record number of ‘quits’ on employees leaving lower-paying jobs to take higher-paying jobs.  This is from “Yahoo News” (Source above):

The musical chairs game that’s roiling the U.S. jobs market isn’t a blip, but rather marks a longer-lasting shift in leverage from employers to workers, experts say.

About 4.3 million Americans quit their jobs in August, the Labor Department said this week, the most on records dating back more than two decades. Many bolted to take advantage of 10.4 million job openings, often at higher pay -- a historically high figure.

A large number of employees are resigning and moving to jobs that allow them to work remotely or at more flexible hours. Others are burned out after toiling away during the COVID-19 pandemic, switching careers after the health crisis led them to rethink their priorities, or opting to stay on the sidelines until the infection surges fueled by the delta variant ease.

While some of the ‘quits’ can be attributed to 10.4 million job openings, simple math has one quickly concluding that’s no more than half the story since 20 million Americans have left their jobs voluntarily.

So, what’s the rest of the story?

Part of the explanation lies with the enhanced unemployment benefits that were awarded liberally.  Those enhanced benefits ceased on September 6.

From April to August, however, workers could collect about $1,000 per week for sitting on the couch.  Certainly, that contributed to the record number of ‘quits’.

This from Harry Wilmerding (Source:  https://ussanews.com/News1/2021/10/12/nobody-wants-to-work-record-4-3-million-people-quit-their-jobs-in-august-as-workers-see-opportunity-in-chaotic-labor-market/):

Chris Markowski, the host of the podcast “The Watchdog on Wallstreet”, told the Daily Caller News Foundation that the record number of quits is attributed to the number of benefits being paid to workers, keeping them out of the workforce.

“Nobody wants to work, it’s everywhere,” Markowski told the DCNF.  “No one has any workers.  The government basically started universal basic income when they sent child care tax to individuals.”

The number of job openings declined to 10.4 million for August from 11.1 million in July, the BLS reported.  Experts to the DCNF that President Joe Biden’s new vaccination mandate is hurting an already thin labor market.

“We are already in an unprecedented labor market right now, and this mandate on private employers adds insult to injury because companies are already facing severe labor shortages,” Rachel Greszler, a research fellow and the Heritage Foundation, told the DCNF.

Greszler pointed to the healthcare and public safety industries who have already been hit hard by labor shortages and vaccination mandates.  Target has begun offering workers better pay and more bonuses in an effort to retain employees.

“If you look at history, there has never been a disparity between job openings and people looking for work, like we are seeing now.  It has never been that high,” Markowski told the DCNF.

Wilmerding points out the proverbial elephant in the room that is affecting employment, the vaccine mandate.  Regardless of how you feel about the mandate or your own vaccination status, there are many workers who aren’t going to get the vaccine under any circumstances.  Those workers will quit their jobs rather than get the vaccine.  That’s another drag on employment.

These labor factors will not help the economy recover quickly.  Instead, they will be an economic drag, adversely affecting profits and stock prices.

Back to the chart published above.

Stocks rallied and ‘gapped up’ this past week.  My guest on this week’s RLA Radio Program, Dr. Robert McHugh, offered this explanation of stock’s price action last week:

Stocks rose again Friday, October 15th, the exception being small caps which fell. The rise was mainly propelled by the large money center Wall Street banks, reporting strong earnings as they deployed the billions of free dollars printed by the Fed and handed over to them for their benefit. This of course comes at the expense of older Americans who saved cash for their latter days but have been robbed of a fair interest rate return on their savings due to the Fed's decade-long policy of near-zero interest rates and profligate printing of money.

This viewpoint validates an opinion that I’ve had for some time; we are in an everything bubble and all markets are artificial as a direct result of Fed easy money policies and massive currency creation.

History teaches us that the bubble will burst with stocks and real estate being most affected.  I believe that stock investing moving ahead needs to be sector based or stocks held in a portfolio need to be hedged to protect from the bubble bursting.

We discussed this in last week’s “Portfolio Watch” suggesting that stocks and real estate were just one “Lehman Moment” away from correcting.

Finally, this week, the wealth gap created by Fed policies has never been more apparent. 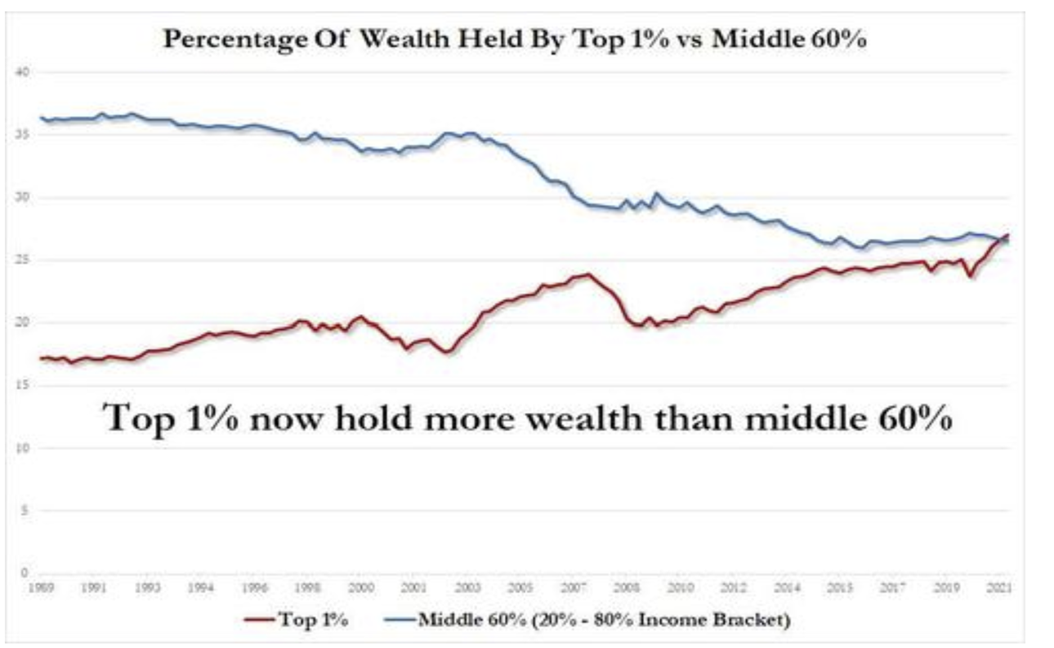 This chart was published on “Zero Hedge” (Source:  https://www.zerohedge.com/markets/working-poor-still-use-food-banks-millions-had-their-savings-wiped-out-during-covid) shows that the wealth of the top 1% now exceeds the middle 60%, defined as those in the 20% to 80% earnings tiers.

As mentioned above, this week’s radio program is an interview with technical analyst, Dr. Bob McHugh.  Bob is an extremely hard-working analyst, publishing an extensive market newsletter on a daily basis.  Dr. McHugh’s market forecast is one you won’t want to miss.

Listen to the show now!  Click on the "Podcast" tab at the top of this page to listen to Dr. Robert McHugh's insightful perspective.

“Whenever you create, you get a little endorphin rush.  Why do you think Einstein looked like that?”